Few people noticed the arrival of Code of Princess on the 3DS back in 2012. It’s probably going to be a similar story for this new EX version of the hack ‘n’ slash/action RPG mashup.

It’s far from a bad game, but it’s a little too easy to forget about its existence once you’ve stepped away from playing. Having said that, on the Nintendo Switch it’s a hugely accessible way of enjoying some co-op based beat ’em up fun, and there are some comedic moments, too.

You play Princess Solange (no relation to Beyonce), as she uses her legendary sword DeLuxcalibur to vanquish monsters and protect the human race. If that sounds cliché and more than a little corny, it is. But it’s meant to be! This is a story that’s well aware of its ridiculous plot and is keen to throw in as many self-referential comments as possible. Not every line hits the spot, but it’s refreshing to see a game appreciate the absurdity of many RPG plot lines.

There’s certainly a ton of story to follow here. Cutscenes litter the game between every brief mission, offering a little more exposition to what’s going on. I wouldn’t say it’s quite a visual novel level of storytelling, but it isn’t far off. You can always skip the cutscenes but I wouldn’t recommend it; it’s where the meat of the game resides. Having an attachment to the characters is vital if you want to withstand the monotony that soon unfolds. 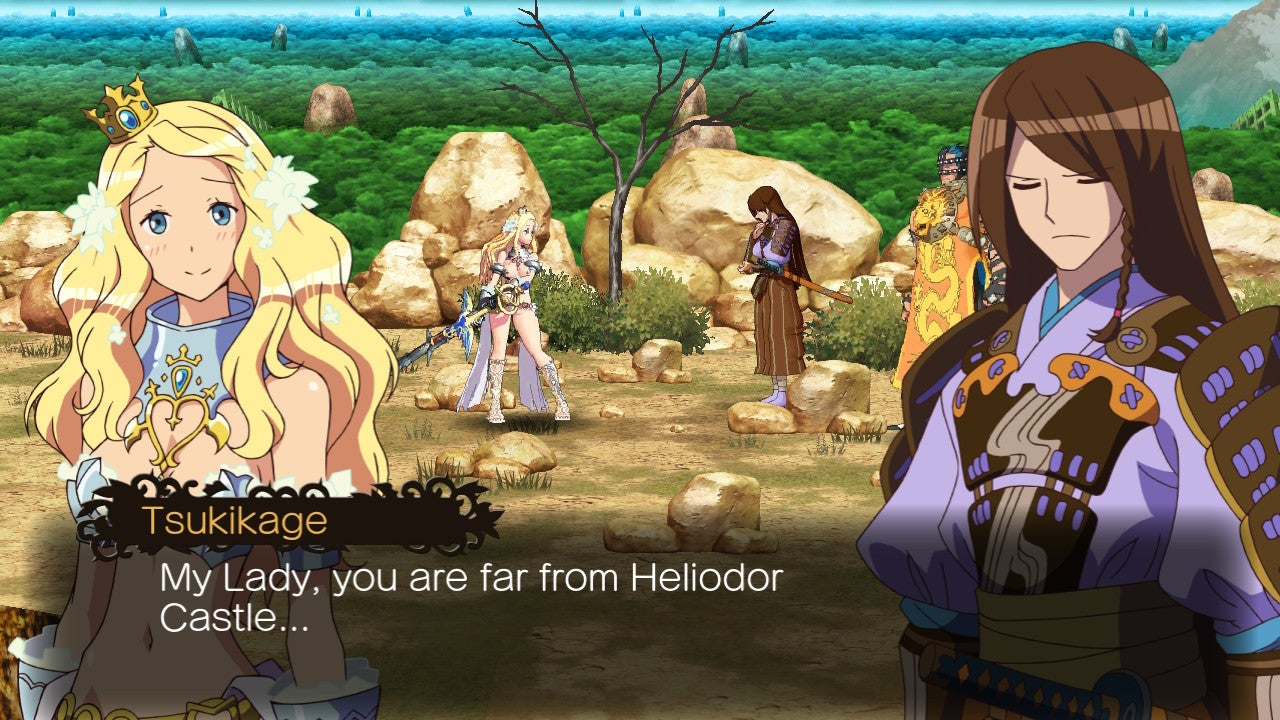 You see, Code of Princess EX is very grind heavy. Each mission lasts only a few minutes, offering you a few scenes to wander through, as you beat up whatever comes your way. Liken it to a Streets of Rage game of old, and you won’t be far off.

Combat is simple, with a few tricks when it comes to combo building. You can perform a few rudimentary attacks, ‘lock-on’ to an enemy, or combine a few taps of the direction buttons with an attack button to string together a few neat moves.

At first, simple button mashing will do the trick, but there is a little depth here. That’s down to the plethora of characters that you can control. In all, there are 50 characters to use in free play mode, with far fewer up for grabs during the main campaign. Each of them feels suitably different to the last. It actually takes a bit of time to adapt to their style, rather than being a simple matter of switching characters and carrying on regardless.

This immediately offers Code of Princess EX some depth. If all characters played the same, this would get boring super-fast. It isn’t a ‘cure all’, but it goes some way to making this a more enticing proposition. 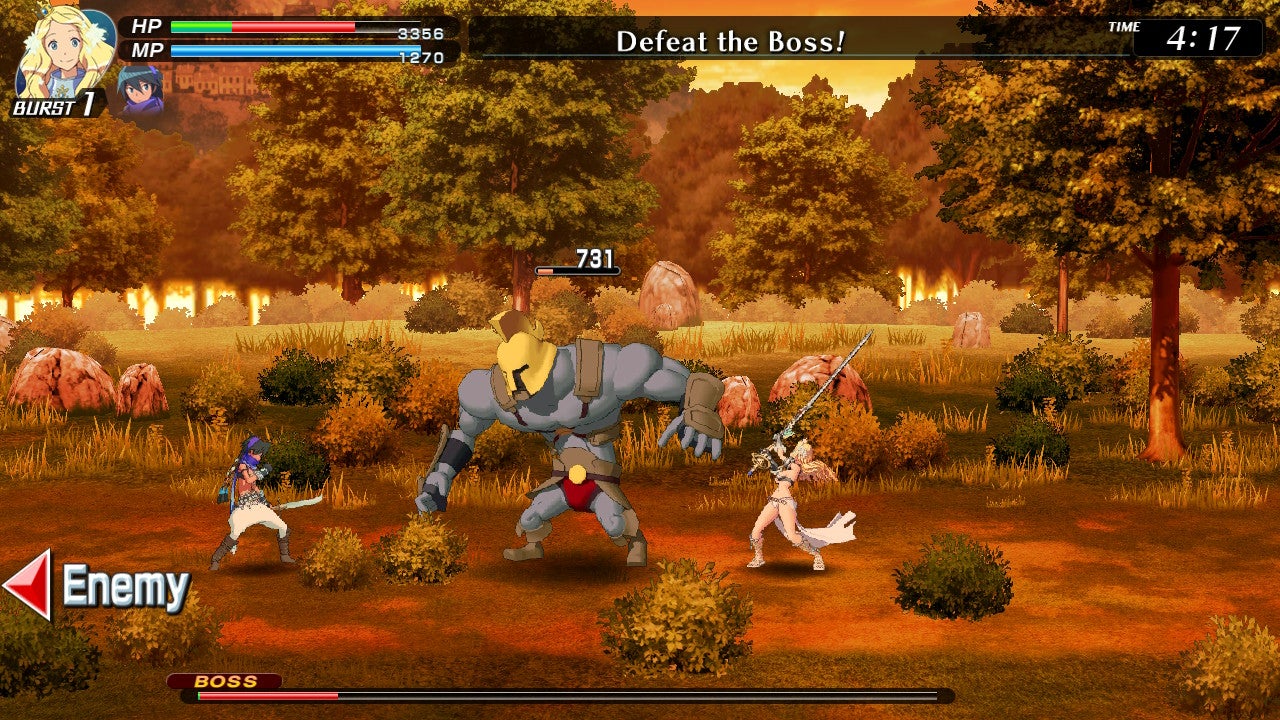 There’s certainly a fair amount of monotony, though. Each session has you picking out a mission, a character, equipment to customise yourself with (don’t get too excited by the quality here), and then there’s a couple of minutes of punching and whacking.

Such a setup lends itself to portable play well. After all, on a commute you wouldn’t really want to commit to anything too involved. The flip-side, however, is that it can feel ‘samey’ during extended sessions.

It’s a concept that’s quite reminiscent of free to play mobile games, but there’s no worry of running out of energy along the way. You can replay old missions, too. In fact, you kind of have to. Grinding is a key part of progression, with some fearsome difficulty spikes peppered liberally throughout the game.

Each mission offers a difficulty rating, but these aren’t always as accurate as you’d like them to be, so don’t be afraid to replay old missions multiple times. Every time you level up, your character stats go up and it goes a long way to improving your chances in tough battles.

This might not be fun for all, though. There’s a certain amount of busywork involved here, extending the length of a game that’s actually very straightforward. Weirdly, though, it can be fun in short bursts. Stick with it for too long and you’ll come to the realisation that this isn’t as entertaining as it first seemed. 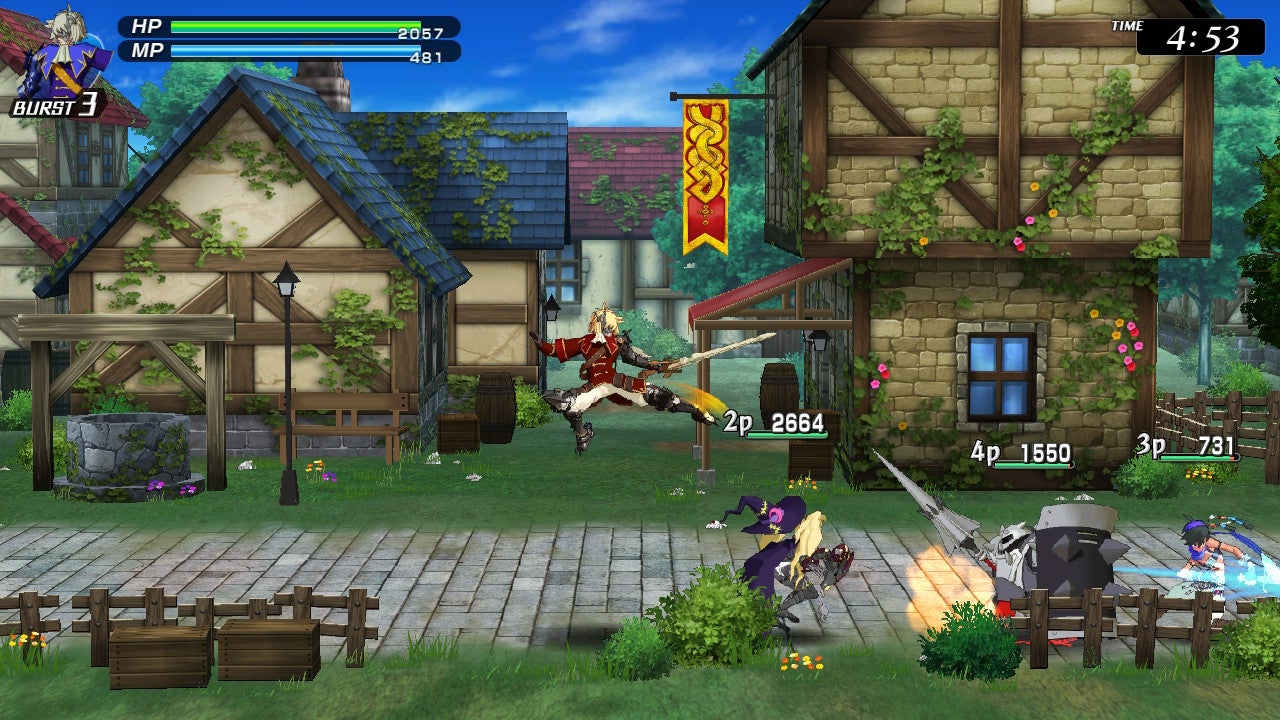 Where Code of Princess EX improves vastly is through its multiplayer modes. Both online and local multiplayer is available, in co-op and competitive modes. Local co-op is enjoyable, and I can only imagine that this extends to online (providing you can find someone to play with), easily invoking memories of childhood sessions of Golden Axe and Streets of Rage.

Code of Princess EX is a bit of a mixed bag for. It looks great, never missing a beat no matter how action-packed things get, and it’s certainly very accessible. And it’s fun – for a time. It simply isn’t a game that will stay with you for any length of time. It’s more a palate cleanser between meatier fare, or for those times you want to relive your youth with some Streets of Rage-style bashing.

At full price, then, it’s a bit too lightweight for what we’d like.