Currently the plan is an 8-12-month Early Access phase and a final release in “early 2018”. But this is Early Access survival we’re talking about and we’ve all been hurt before. Keep an eye on the Steam page for further announcements by the developers, and don’t be surprised to see it slip at least a month or two behind schedule.

Most of the planned improvements along the way are simply expansions of what’s in place now: more wands, more beasts to tame, more building options, and more creatures to fight. There’s also mod support on the way, though, which would really open C:FWF up to be taken in whatever direction its community desires. And that’s kind of the point of Early Access, right?

An expanded and more sophisticated House vs House warfare system is also on the list, which will apparently give you more reason to play with others, forge alliances, and wage war with organised bands of other fleshy human folks. 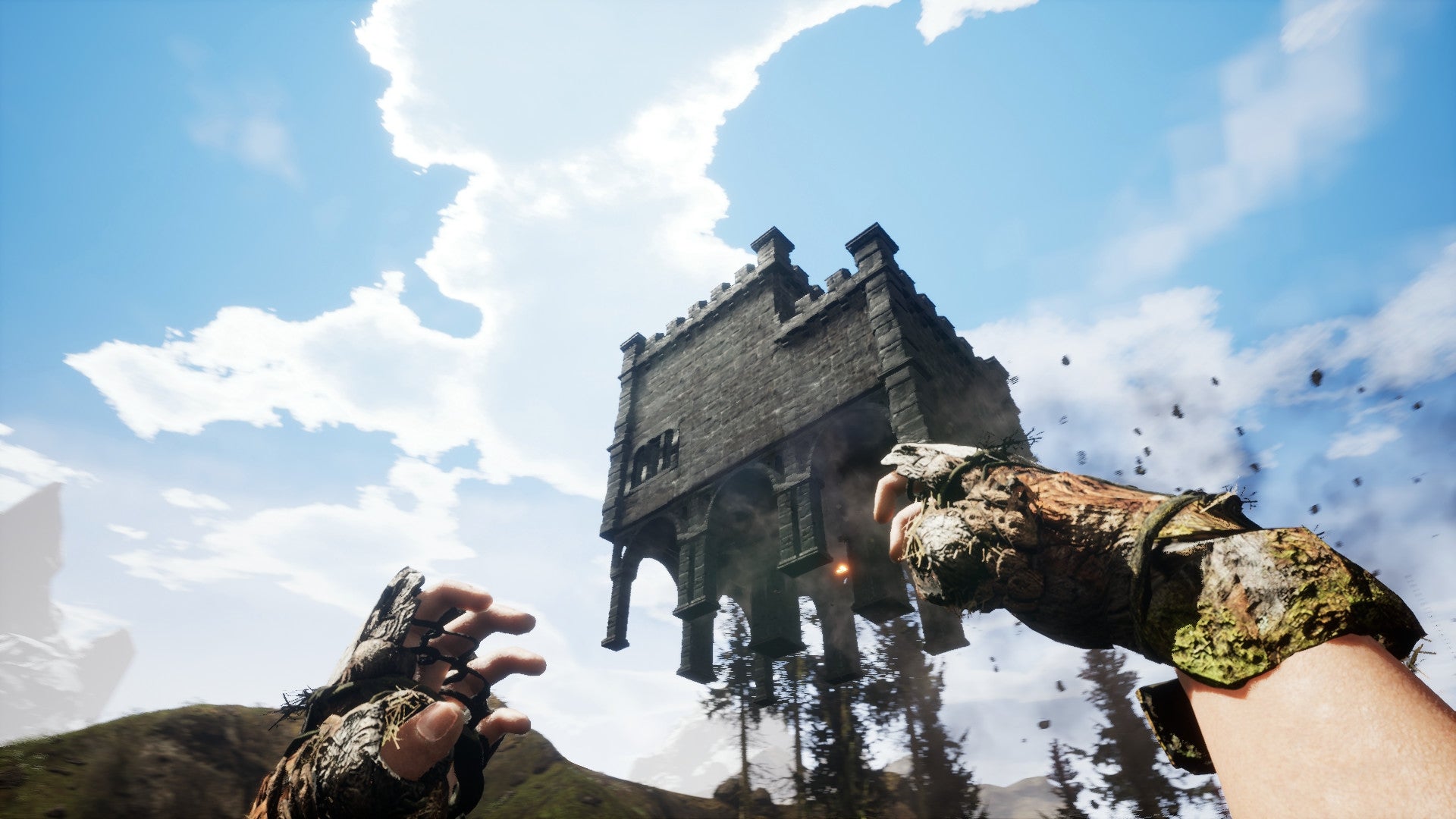 Citadel: Forged With Fire frame rate – how to unlock FPS

Running this game at anything above 60fps is a difficult task for any hardware at the moment, and your fps might even vary from server to server. However, if you’re hitting the 62fps cap Blue Isle have imposed, there’s at least an easy way to circumvent it.

Then open ‘GameUserSettings.ini’ as a text document, fine the FrameRateLimit line and change it to 300, like so:

The minimum specs are reasonably low for this game. Blue Isle’s minimum specs include a 2GHz CPU, 8GB RAM, and GTX 950 or better in the graphics card department. That might get you up and running at the lowest graphics settings, but a machine with those specs will really struggle at higher settings.

Recommended specs aren’t much higher: 3GHz CPU, 16GB RAM, GTX 970 or better. In our experience, with the game at the beginning of its journey through Early Access, you’ll need a GTX 1070 or better to max out the graphics settings and hit something approaching 60fps. This is very likely an optimisation issue, though, and as such you can expect subsequent updates to improve performance on machines of any spec. Citadel: Forged With Fire base building

Fundamentally the base building is simple: a familiar snap-on item-placement system will get you laying foundations, walls, stairs and ceilings early on in the game, and wooden construction sets are unlockable well before hitting level 10. Resources are so abundant on most servers that you’ll be able to build a reasonably spacious home or crafting base via solo play alone. Just make sure to place your throne (unlockable for free at any time) in your newly built base so it doesn’t disappear.

From there, a bit more time, levelling and collaboration is required. It’s possible to build enormous multi-level castles if you can gather enough stone and iron together, but since it’s also possible to raid and destroy player structures, your first thought when building anything substantial as a high-level player should be fortification. Better fortification options are unlocked as you level, particularly once you get over the level 20 hump.

Taming is a big part of the game, although it works differently than you’ve come to expect in Ark. Once you unlock the ‘pacify’ spell at level 10 you’ll be able to tame low-level creatures such as bears, but there are some significant provisos to consider: firstly, you need a lot of mana to successfully cast the spell, and even after doing so they’re only tamed for between 30 minutes and 2 hours, depending on the creature’s level.

This is proving a big turn-off for a section of the community, and who knows – maybe it’ll be tweaked down the development road. It’s Early Access, after all. For now, that’s what we’ve got. The only way to extend it is by using scrolls, which do stack and allow you to keep a being tamed for up to two weeks.

Once your creature’s tamed you get to name it, and issue it orders – stay or follow in passive or aggressive modes. If you’ve crafted a saddle you can ride it around as long as it’s under your spell. 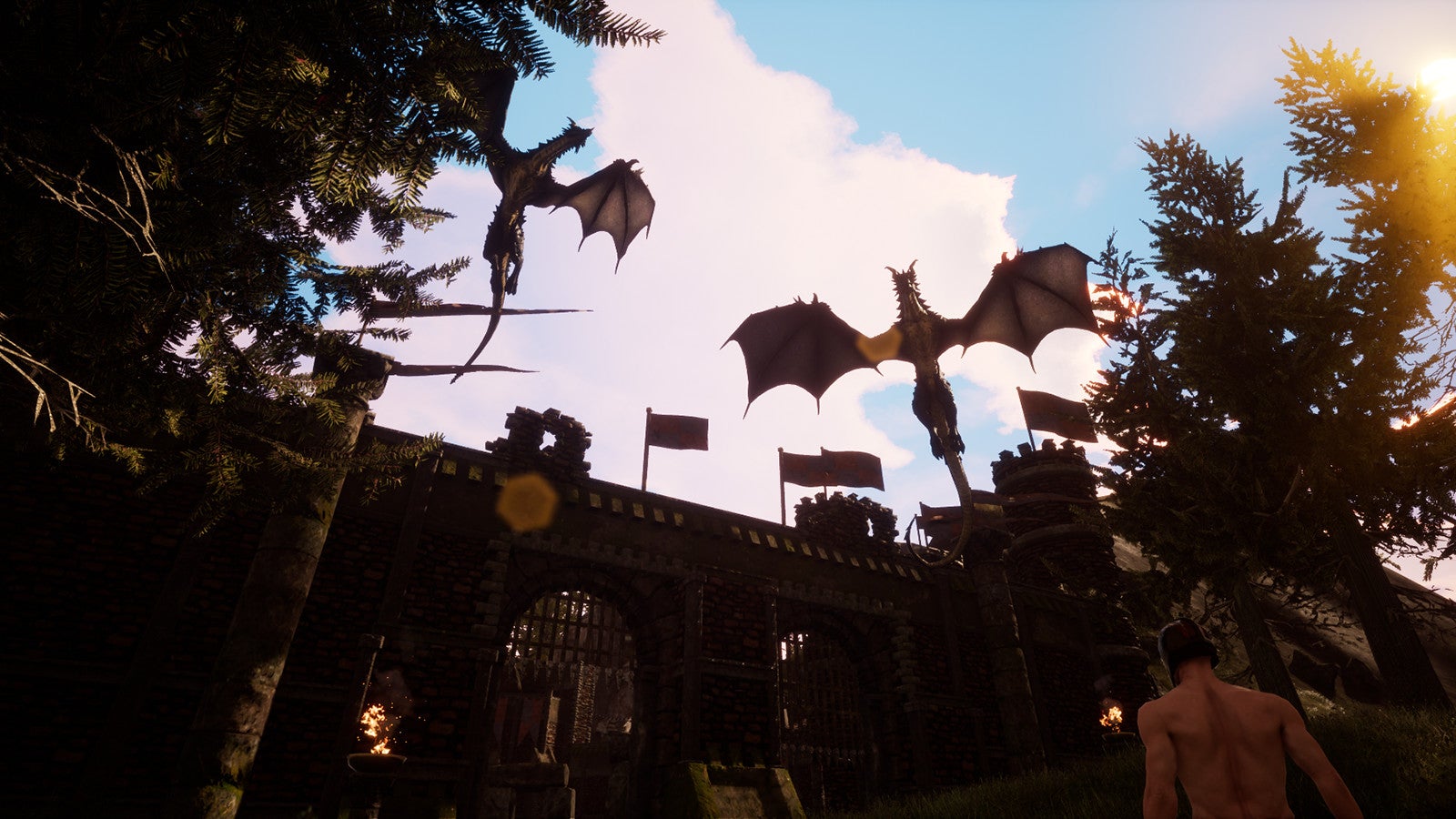 If you have your heart set on taming a dragon, the process isn’t any different than the one described above, but the health and mana requirements are pretty huge. Even to tame a small Wyvern you’ll need to be at around level 30 to stand a good chance. Keep casting ‘pacify’ while following your target on your broom, and eventually it’ll submit. Now it’s just a matter of finding those scrolls to make it loyal for longer.

Billed as a “massive online sandbox RPG” and bearing the hallmarks of both survival games and MMOs, Citadel: Forged With Fire has some lofty ambitions. One way to look at it is Ark: Survival Evolved with Wizard hats: it’s a giant open-world populated by other players and AI enemies, and it’s full of materials to be crafted into gear and buildings, creatures to be tamed, and human alliances to be joined – or fought against.

But just because your very first experiences of C:FWF are of collecting sticks and rocks from beaches, don’t expect an exact facsimile of Ark or Rust. There’s no hunger or thirst meter to worry about, which makes the fundamental experience drastically different to the aforementioned titles. Yes, you’re still hoovering up wood, stone, mushrooms, flowers and absolutely everything else in sight, but you’re not slowly dying while doing so. Instead, the focus is on a gentler kind of exploration, and a relatively tranquil open-world experience. That’s unless you elected to play on a busy PvP server of course, in which case: yes, you’re going to get punched to death a lot.

And even if you’re playing on a PvE server, you can’t relax completely. Wandering Warthogs, Sprites, Orks and the like will dispatch of low-level players like hungry lorry drivers at a roadside burger van unless they managed to craft a decent staff, learn a spell or two, and make a cloak out of pine trees and flowers. Sturdy.

The early game continues thusly: resource-gathering, Warthog-smiting, item-crafting. Rinse and repeat. It makes a welcome change not to have to wrestle with token thirst and hunger bars, which never really feel immersive in any game they appear and instead function as a low-level annoyance. Also welcome is a more laissez-faire inventory/weight system than most survival games adopt. Rather than being absolutely rooted to the ground as soon as you pick up, say, 15 lumps of rock, you’re only bound by the number of slots in your inventory here. So while you can’t carry a huge amount of different resources and items, you can carry a decent variety in huge numbers. As anyone who’s spent actual days schlepping from their beachside hut to a nearby forest in Ark will tell you, weight-limited inventories don’t provide fantastic apparatus for fun any more than thirst meters do.

Let’s not give the wrong impression, though: C:FWF’s innovations and ambitions aren’t just limited to the things it leaves on the cutting-room floor. There’s real, scary depth to the crafting, building and spellcasting here. The ‘extract’ spell, for example, is unlockable early on, and lets you siphon nature’s goodness quicker than your humble fists could ever manage. In the later game, however, you’re able to summon down meteors from the sky with ‘conflagrate’ and harvest their resources, or use ‘telekinesis’ on entire buildings. In other words, you can pick up castles and throw them at things. Not even Vold– sorry, You Know Who, could pull that one off. 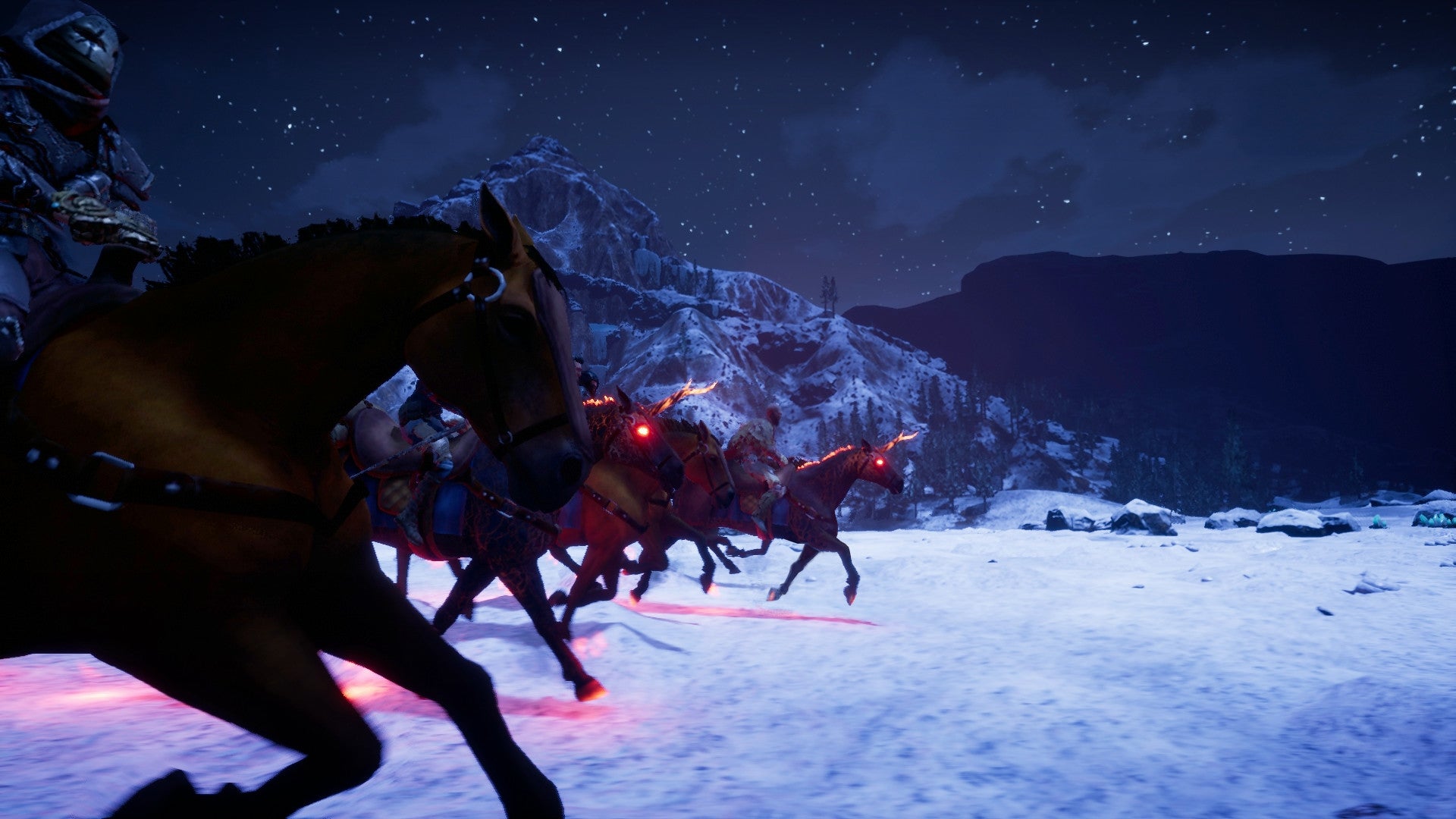 Perhaps even more impressive than the dramatic spells and the detailed environmental destruction they can wreak is the game’s basebuilding. Sure, your first structure will be a shabby wooden shack, just like the one’s you’ve built in every game since Minecraft, but the upper limit of what this game’s capable of is sky-high. Both internal and architectural detail has scope for incredibly ornate and complex structures, and it’s entirely possible to build an entire walled castle with multi-tier buildings within the outer fortress walls. It’s a goal that only really becomes achievable by forming a House with other players and pooling your resources, not to mention grinding through the levels in order to unlock construction packs. Even at the beginning phase of Early Access though, players are laying down some formidable fortresses.

Speaking of: if you’re Early Access-averse, this one is definitely one to wait a while on before investing your time and money. While developers Blue Isle are planning an 8-12-month dev cycle in this phase with frequent updates along the way, currently the game has some substantial teething problems. Chief among them are server issues: disconnections are frequent, and most of the functions in the server browser don’t work at present, including the big one: history. Unless you can remember the name of the server you were on and manage to find it manually, that’s your progress gone.

Optimisation is another prominent item on Blue Isle’s to-do list. It’s capable of breathtaking visuals at times thanks to Unreal Engine’s various guiles, but getting it to run at a stable 60 fps is proving a Sisyphean task for many players at present, including those with Nvidia’s GTX 1080 or 1080Ti. On a GTX 1070 running at 2560 x 1600, frame rates can fluctuate from the high teens up to high fifties. Thankfully there’s at least a quick fix for unlocking the frame rate if your system can hack it – we’ve got the details below.