The G-Shock GBA-400 is a Bluetooth watch which connects to your phone and enables you to remotely change music tracks and alter the volume. Part of the famous G-Shock range, it boasts the traditional ruggedness that the brand is famous for – it offers shock resistance and is waterproof down to a depth of 200m. The watch itself is largely plastic, and comes with an analogue movement and two LCD screens. 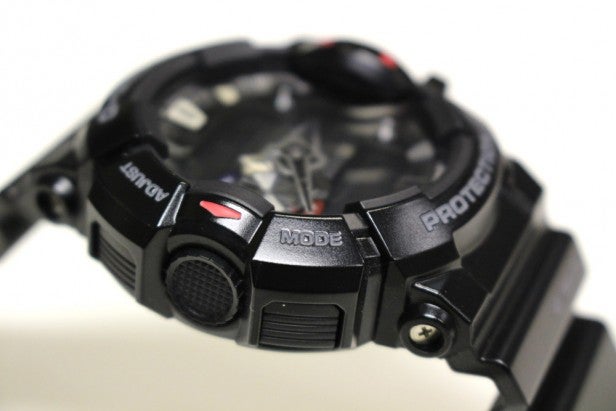 While most modern smartwatches are dominated by touchscreen displays, the G-Shock GBA-400 looks like any other member of the G-Shock family. The chunky plastic design gives the watch a level of resilience which timepieces like the Moto 360 and LG G Watch can only dream of – this is a device which is more than capable of standing up to the rigours of daily life, and the water resistance goes way beyond what other smartwatches are capable of. With a limit of 200m, the GBA-400 can take dips in the ocean, not just the bathtub.

The face of the watch features an analogue movement with large silver hands, as well as two LCD screens. The uppermost screen is where you’ll find the date, but when the watch is connected to your phone and flexing its music control talents, the current track name scrolls across this display.

Between the LCDs is a large silver disc which rotates to show whether or not the Bluetooth is on or off – a totally useless element, but one that looks pretty cool all the same.

The lower LCD display shows the time in a digital format, which is just
as well, as the busy-ness of the dial overall makes the hands a little
difficult to read. 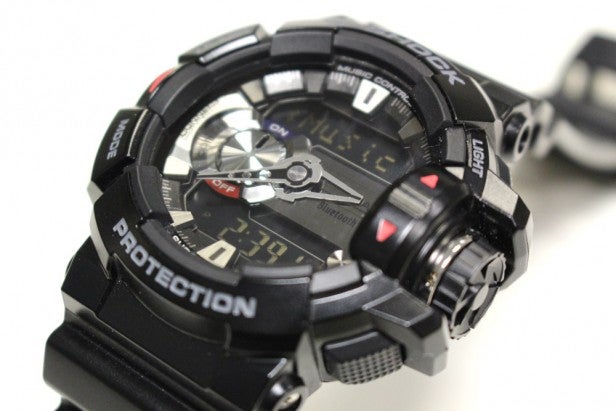 On the right-hand side of the GBA-400 there’s a large wheel which can be rotated to change tracks on your phone’s music player or alter the volume level – the function depends on which connection mode you’re using, but we’ll get to that later. The positioning of the dial means that if you wear your watch on your right hand, you might have difficulty operating it.

Arrayed around the edges of the GBA-400 are five buttons. One’s used to trigger the Bluetooth connection, while the other four are concerned with general watch functions, such as cycling through modes and controlling your music. One of the buttons is used exclusively to activate the “Super Illuminator” LED light, which is supposed to make the dial easier to read at night. In reality, it does a pretty poor job and as a result it’s sometimes hard to tell the time in dark conditions. 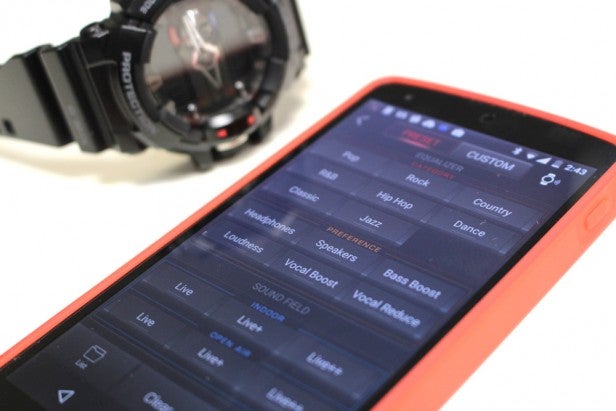 The GBA-400 has all the usual watch features, such as an alarm, stopwatch and timer. However, the most significant selling point has to be the ability to control your phone’s music player. It’s compatible with both iOS and Android, using Bluetooth and an app called G-Shock+ to do all of its wireless magic.

While it’s possible – and perhaps even preferable – to use G-Shock+ to control your native music player, you can also install another Casio-made app by the name of G’Mix. This is essentially a dedicated media player with its own equaliser settings and interface. It even comes with the rather nifty feature of being able to listen to songs played nearby and identify them using a baked-in version of SoundHound. 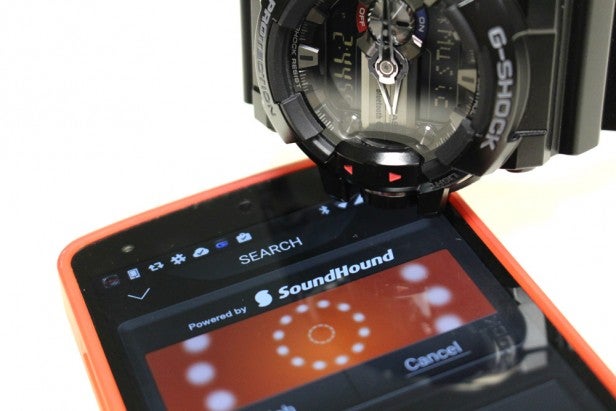 The big issue we personally found with G’Mix is that it only allows you to access tracks that are stored in your phone’s memory. If you use Google Music and have your collection stored in the cloud, the G’Mix can’t access or play any of those tracks. Also, when using G’Mix the physical controls on the watch are slightly different – the rotary dial controls tracks, whereas the G-Shock+ connection uses it to toggle the volume. The other buttons on the watch control moving through tracks and stopping or playing songs.

Unlike other smartwatches, the GBA-400 doesn’t offer any kind of notification alerts for events on your phone. This is a rather strange omission, as Casio’s previous Bluetooth watches have showcased this feature, albeit with somewhat inconsistent performance. In the case of this particular watch, we found that the Bluetooth connection was well behaved, although there’s an enforced disconnect period in order to conserve the battery. When the watch powers down, you’ll need to manually pair it again. 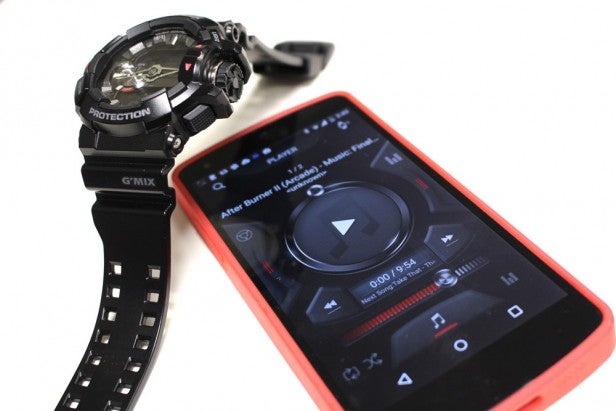 Although we’ve naturally not been able to confirm it, Casio claims the GBA-400’s battery is good for two years of use. That’s a fairly generous prediction, and if you have the Bluetooth turned on a lot during the day, you can expect to get much less.

It goes without saying that you’ll also have to change the battery when it does eventually fail, but we’d gladly take that over the rechargeable power cells which ship with pretty much every other smartwatch, some of which require a top-up on an almost daily basis. Again, this is yet another way in which the GBA-400 has more in common with a traditional watch, rather than one of the “smart” persuasion. 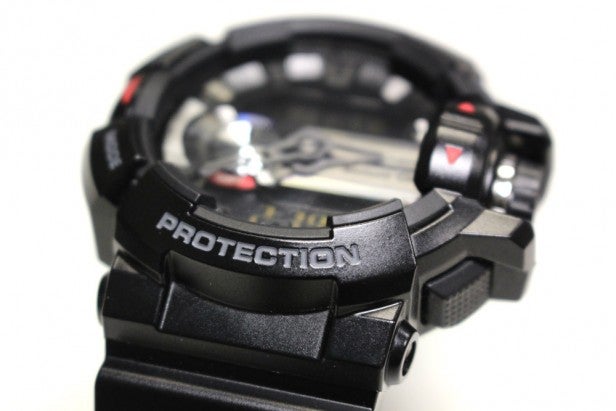 If you’re already a firm believer in the wearables concept, there’s a good chance that the G-Shock GBA-400’s limited feature set will come as something of a disappointment. It won’t inform you of emails, tell you who’s calling or list the contents of your text messages – functions which, ironically, Casio has seen fit to include in its previous Bluetooth watches, the GB-6900 and GB-6900B.

However, this weakness could potentially be viewed as a strength. By focusing on a single aim – controlling your music without having to remove your phone from your pocket – the watch is capable of doing that one thing really well.

It’s also important to remember that, despite its smartwatch pretentions, the GBA-400 is still a solid timepiece with all of the build quality you’d expect from a G-Shock – and that makes it far more rugged and resilient than your typical wearable.

The G-Shock GBA-400 combines Casio’s famous toughness with limited smart capabilities – it’s not quite a smartwatch, but still offers some cool connectivity with your iOS or Android handset.