Appreciate the Soundbar 10 for what it is and you’ll be hugely entertained. It does a sensational job with Atmos movies and streamed TV shows, but sounds a bit one-dimensional with non-Atmos content

Like previous Canton soundbars and soundbases, it brings a touch of Teutonic class to proceedings – but is it really worth the price premium it commands over the lookalike Soundbar 9, and rivals such as the Sonos Arc?

There’s only one way to find out.

The Soundbar 10 was announced and released in 2019. It went on sale for a price of £899/€899. It’s currently not available in North American or Australian markets

The Soundbar 10 boasts serious hi-fi credentials, but it’s also room-friendly. Just 7cm tall with a depth of 10cm, it won’t dominate a screen. At 99cm wide, it’s suitable for flatscreens of 50 inches and upwards.

Yet despite the compact profile, it still has room for up-firing drive units to support its Dolby Atmos aspirations. Canton describes the Soundbar 10 as a 2.1.2 solution.

Build quality and cosmetic finish are second to none. Canton has got the premium look down, thanks to a mix of gloss lacquer (watch out for fingerprints) and glass. At 5.24kg, the Canton Soundbar is a reassuring weight. All drivers are protected behind metal grilles, and the unit is available in a choice black or silver finishes.

There are eight drivers in play. Four 79mm bass drivers, which aim skyward, plus two forward 50mm mid-range units, coupled with a pair of 19mm fabric-dome tweeters. The soundbar uses a phantom centre. 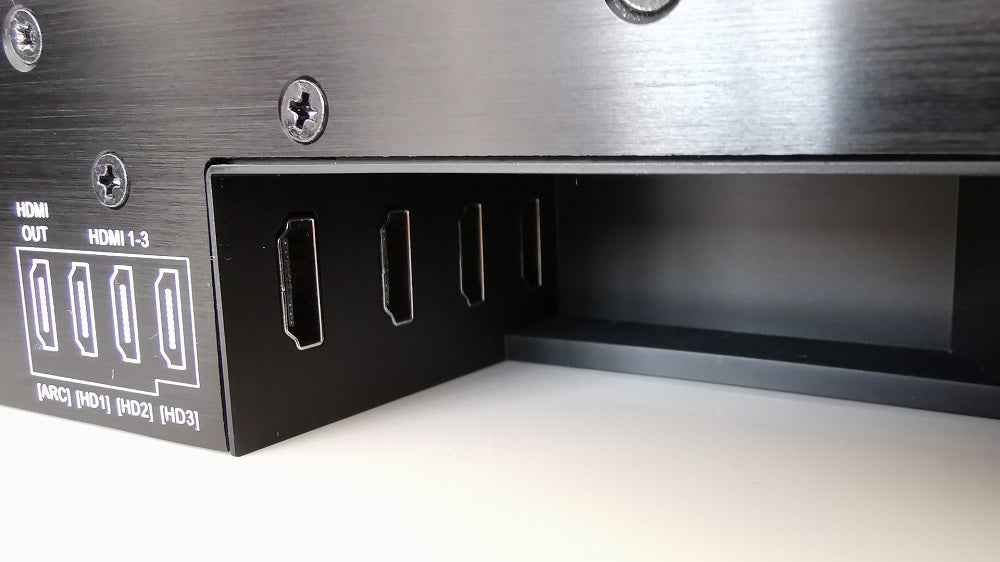 Connectivity is comprehensive. There are four HDMIs: all 4K, HDR10 and Dolby Vision compatible, with one ARC-enabled, so you can run the audio from TV apps straight into the bar for playback. There’s also a pair of digital audio inputs, one optical and one coaxial, plus a stereo phono input and Ethernet.

While no matching subwoofer is bundled, you can always add one afterwards. Canton offers the wireless Sub 8 from its Smart speaker range as the best candidate. There’s also a phono sub-out, if you already have a boombox to hand.

As befits its “Smart” moniker, the 10 is Wi-Fi and Bluetooth (4.0) capable. Wi-Fi is dual band, so there’s the option of 2.4GHz and 5GHz connections. Chromecast is built-in, with Spotify Connect, Tidal, Google Play Music, Deezer and TuneIn easily streamed.

Owners of Canton multi-room sound systems can also incorporate it into their whole home audio ecosystems.

The soundbar itself sports touch-sensitive controls up top, but there’s also a compact remote control supplied. 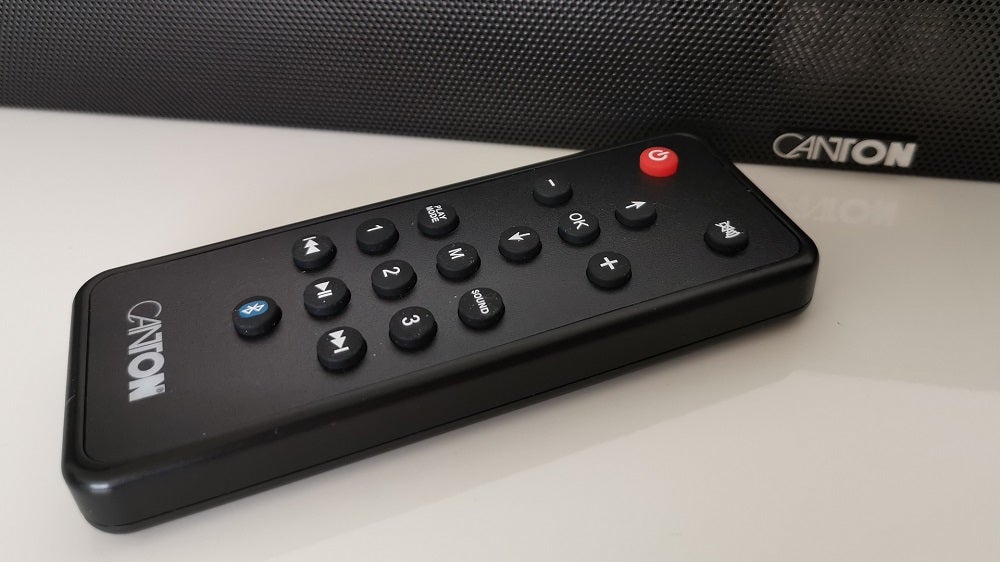 In addition to Dolby Atmos, the Soundbar 10 is compatible with DTS-HD and DTS 5.1 audio. But if you’re looking for DTS:X support then you’re out of luck, at least for the time being. There has been a suggestion that this will be added via a firmware update in the future, so fingers crossed.

Setup doesn’t involve any auto-calibration. You’ll need to dive into the on-screen menu and get your hands dirty.

The on-screen display is a simple text overlay, but is straightforward enough to navigate. The soundbar itself has a matching graphic display.

Not only can you alter the level of the physical drivers, but also the virtual rear surround rights and lefts and the phantom centre. There’s adjustable distance and room height, as well as device height. You can also tweak lip sync, in 10 millisecond blocks. Bass, mid-range and treble controls are all adjustable, while a trio of sound modes support different genres of content.

Once configured, the Soundbar 10 sounds supremely cinematic. Cut it in half and you’ll probably find popcorn and nachos inside. It does a fantastically good job of creating an immersive soundstage with Dolby Atmos content. There’s height, width and an airy presentation that’s immediately impressive.

Not surprisingly, there’s no real sense of physical surround sound, although the same can be said for most speakers of this ilk. If you want to upgrade to a full multi-channel sound system, then Canton will supply you some wireless rears. 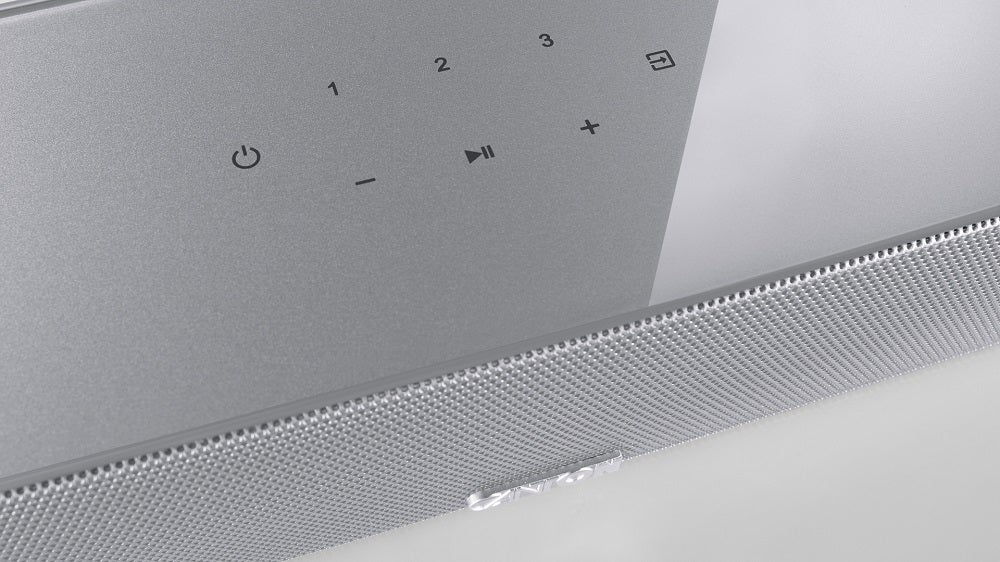 We put the Soundbar 10 through its paces with the usual collection of Dolby Atmos demo test clips, as well as some much-worn classic mixes. We quickly came to the conclusion that this bar does Atmos cinema exceptionally well.

The opening chase in Mad Max Fury Road is deliciously dynamic. Max Rockatansky’s opening monologue sits in space before the screen, before that pack of pursuing vehicles thunder into view. The presentation is rewardingly theatrical. 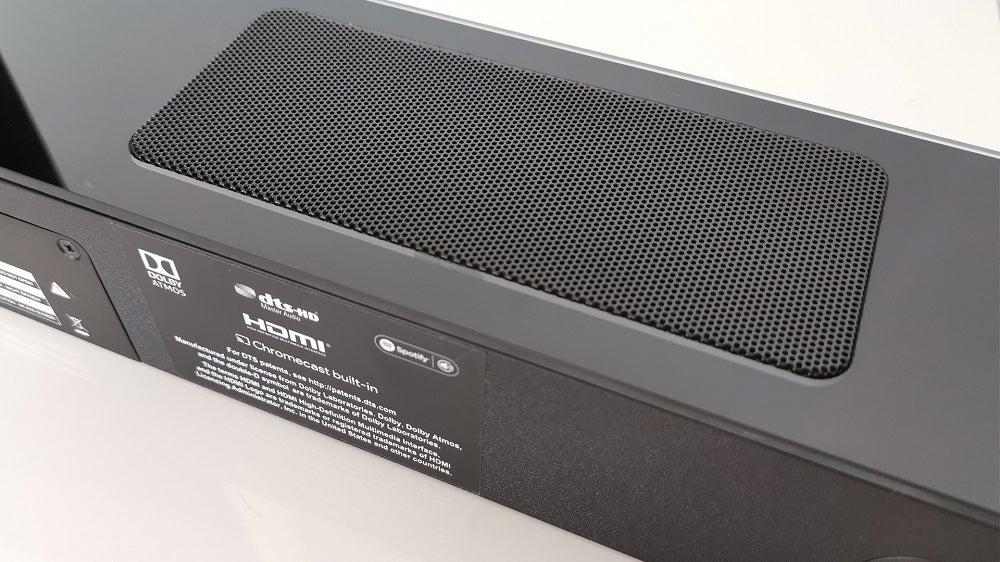 One thing we did notice is that with non-Dolby Atmos material the soundstage shrinks, becoming rather more constrained.

The opening deer hunt from Dawn of the Planet of the Apes (Blu-ray), a DTS-HD MA mix, lacks the spatial definition so evident with Dolby Atmos content.

We’re back in happier territory with the tense thriller Uncut Gems (Netflix). Here Atmos is delivered over HDMI from the TV app – using ARC – to the bar, and the soundstage plumps out once again. Daniel Lopatin’s score is throbbing and intense. If you’re intending to use this Canton with Dolby Atmos streaming TV services, it does a fine job.

Perhaps predictably, bass response is limited. While the Soundbar 10 makes a fist at 50Hz, the result is more DSP “parp” than meaningful punch. It saves most of its energy for 100Hz.

Power output is quoted at 300 watts. We think it goes loud enough for most medium and smaller rooms, although we wouldn’t want to crank to the max, since it starts to get a little trumpety.

As a two-channel music speaker, the Soundbar 10 is entirely serviceable, if a little undynamic. The detail is present, but perhaps not a joyous sense of musicality. This is very much a home cinema sound system, and it showcases Dolby Atmos brilliantly well.

You should buy the Canton Smart Soundbar 10 if…

Appreciate the Soundbar 10 for what it is, rather than what it is not, and you’ll be hugely entertained. It does a sensational job with Atmos movies and streamed TV shows, creating a soundstage that’s both imposing and immersive.

With its best-in-class cosmetics and build, you’ll quickly come to the conclusion that the Canton Smart Soundbar 10 Dolby Atmos is a well-balanced TV upgrade – and, like popcorn, is difficult to resist.

You shouldn’t buy the Canton Smart Soundbar 10 if…

The provision of physical up-firing Atmos drivers, rather than rely purely on virtualisation technology, brings immediate rewards. If it does have a flaw, it’s that beyond Atmos it can sound a bit one-dimensional.

The Sonos Arc serves Atmos height channels even better than the Canton and is better suited to music playback, too. That’s not to say it doesn’t come with its own foibles, however,