The Air 200 V2 is the second generation of Cambridge Audio’s Minx Air wireless speaker, which comes equipped with WiFi, apt-X Bluetooth, AirPlay and Spotify Connect – the latter being a new addition to the feature list.
This new version also boasts an updated design and offers what its creator describes as “an improved, more rhythmic and musical sound”. It’s joined in the range by a less powerful version, the £300 Air 100 V2.

Available in black, white and a new premium matte finish, the Air 200 V2 is a stunning speaker in any colour. At 220mm high by 174mm deep, it’s relatively big and less discreet than many wireless speakers, but the elegant curved enclosure and classy grey cloth grille disguise the bulk.

This grille covers the entire front panel and is surrounded by a fetching silver trim, while the high-quality matte finish on the rear end exudes a sense of luxury. It rests on a thick rubber pad on the bottom.
There’s no display panel, only a single LED behind the cloth that glows in different colours to indicate the selected input. Running along the top are two rows of buttons. The left row includes five numbered internet radio preset keys; the other five presets are selected using the remote. The right row houses volume, input selection and power. The solid rubber buttons click firmly when pressed.
Build quality is outstanding. The acoustically damped enclosure is robust and hefty – no wonder Cambridge Audio has fitted it with a built-in carry handle, which also doubles as the bass port.
An attractive brushed metal back plate plays host to a smattering of sockets, including RCA analogue input, a 3.5mm mini-jack input, an Ethernet port and a micro-USB port for service use. The analogue ports are useful for hooking up a TV or portable device. A small and fiddly dial on the back allows you to adjust the bass level, and there’s a WPS button to help connect to a router.

The Air 200 V2 takes a come one, come all approach, letting you stream music from a variety of sources across all operating systems. They include DLNA/uPnP devices, internet radio, Apple AirPlay and Spotify Connect, which lets premium users stream music directly from the Spotify app.
It can all be accessed from Cambridge Audio’s Air app for Apple and Android devices, which allows you to search 20,000 web radio stations from around the world.
You can also stream via Bluetooth, while apt-X support lets you enjoy CD-quality sound from compatible devices. The only thing missing is multiroom functionality, which might come as a disappointment if you have a few Airs dotted around the house.

The Air 200 V2 is endowed with a pair of Cambridge’s fourth-generation 2.25-inch Balanced Mode Radiator (BMR) drivers, also found on the company’s flagship Aeromax 6 floor-standing speakers, plus a 6.5-inch subwoofer. They’re driven by a custom-developed Class D digital amplifier, which musters 200W of power – the same as the Minx Air 200 – and helps the system deliver a wide, room-filling sound.
The EQ has also been updated, achieving what Cambridge describes as a “warmer and more natural musical performance” than the Minx Air speakers.

The Air 200 V2 looks easy to set up on paper, but like any wireless speaker it’s bound to seem complicated to first-time users – particularly if you encounter any snags.
For starters, to connect Air to your WiFi router you’ll need a PC, which makes the process rather convoluted. Connect your PC to the speaker’s own WiFi network, enter its IP address in a browser, and type your password into the setup screen. The network info is shared with Air and you’re good to go (a solid green light on the back confirms the connection).

Sounds easy enough, but if the tiny LED on the back isn’t flashing in the right way, or if your laptop won’t connect to the speaker – as I experienced – then the solution isn’t obvious. I got there in the end, but it could have been so much easier. Cambridge Audio should take leaf out of Samsung’s book, which uses its smartphone app to set up the WiFi connection.
On the plus side, the Air smartphone app is clear and simple, using a friendly colour palette and an uncluttered layout. It’s easy to jump between sources or tweak the sound.
The main screen displays a list of ten popular radio presets, but you can replace them with your own using the search tool or by browsing locations and genres. These presets correspond with the physical buttons on top of the unit, which means you don’t need your phone to select favourite stations.

A handy sidebar displays the list of available sources. Disappointingly, the Air app doesn’t access UPnP or DLNA servers itself – instead it launches the third-party BubbleUPnP app. Similarly, if you select Spotify it takes you to a separate app. This isn’t unusual, but it doesn’t help the overall sense of integration.
Tap the volume icon at the bottom and a dialogue box lets you tweak the volume and bass, or choose from a range of 12 presets. If you like it old-school you can control the Air 200 V2 using the supplied remote, but I wouldn’t recommend it. It’s an awkward, fiddly credit card-sized zapper with unresponsive blister buttons – a high-quality speaker like this deserves better.
It sports dedicated bass controls and ten numbered keys that let you jump to your required radio preset, but annoyingly there are no Bluetooth playback controls.

Cambridge Audio wasn’t kidding about the Air 200 V2’s room-filling sound. The scale and reach of those BMR drivers is enormous, flooding the listening area with music. There’s no omnidirectional tech or fancy processing at play here – it’s just powerful.
As a result, the Air 200 gives tunes plenty of oomph when it matters. The sound is dynamic and punchy, tackling up-tempo rhythms with admirable enthusiasm.
Such muscularity is largely due to the sterling efforts of the subwoofer, which underpins songs with tight, beefy bass notes and makes kick drums hit hard. Play “Silver Shadow” by Incognito and the Air 200 handles the funky bassline with terrific depth and pin-point timing, making the track groove along effortlessly. You can adjust the bass level on the rear, but I never felt the need to push it any higher than halfway.

With such a large, potent subwoofer on board, there’s always a chance it will thicken up the sound and stifle the other sonic elements. However, provided you don’t twist the bass dial too far, this isn’t the case – the mids and treble are given room to breathe, resulting in an open, expansive sound. The tonal balance is spot-on.
There’s warmth in the keyboards and a lovely crispness in the cymbals too. We’re not talking Naim Mu-So or Monitor Audio S200 levels of finesse and high/mid-range separation here, but it’s certainly one of the more polished wireless speakers I’ve tested – and that applies whether you’re listening via WiFi, Bluetooth or the analogue inputs.
The Air 200 V2 handles loud volumes confidently, with no distortion or hardening in the high frequencies. It’s a poised and steady listen no matter how high you push the level, and that’s a rare talent in this market.
I’m also impressed by how it teases out subtleties in delicate jazz pieces such as “Flamenco Sketches” by Miles Davis. The gently caressed cymbal and the breathy leading edge of saxophone notes are clear as day. 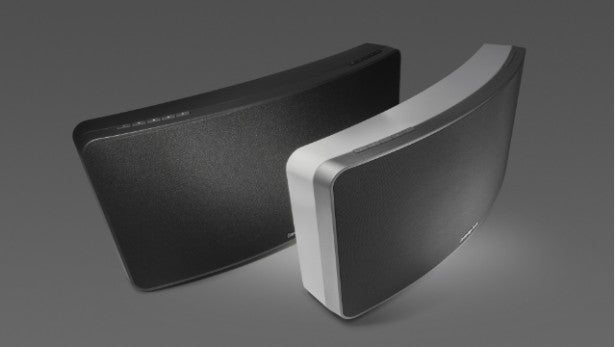 Should I buy the Cambridge Audio Air 200 V2?

Aside from the cumbersome setup procedure and cheap remote, the Air 200 V2 is a superb wireless speaker that won’t leave you feeling short-changed.
Build quality is excellent, and its alluring design will look great in any living room. The inclusion of Bluetooth, AirPlay, DLNA/UPnP, web radio and Spotify Connect (plus two analogue inputs for old-school gear) provides a wealth of listening options, while the straightforward Air app makes it easy to stream music from any source.
But it is the Air 200 V2’s performance that’s the real star. It delivers a hugely powerful room-filling sound with massive amounts of bass and plenty of detail. There are more refined performers out there, but it’s such an exciting, authoritative listen that it’s still worth a punt despite its shortcomings.

The stylish Air 200 V2 brings some much-needed muscle to the wireless speaker market, although setup could be easier and there’s no multiroom functionality.