What is the Breville VTT571?

The Breville VTT571 toaster is billed as “The Perfect Fit for Warburtons” but this is surely a marketing tie-in rather than a genuine attempt to make a toaster that does a great job with tall slices of bread. The Breville’s slots are not much bigger than those found in most modern toasters. In fact, some boast bigger slots.

Its “lift and look” function is great for inspecting progress without cancelling it. But toasting is uneven and very disappointing: The worst I’ve had on test. 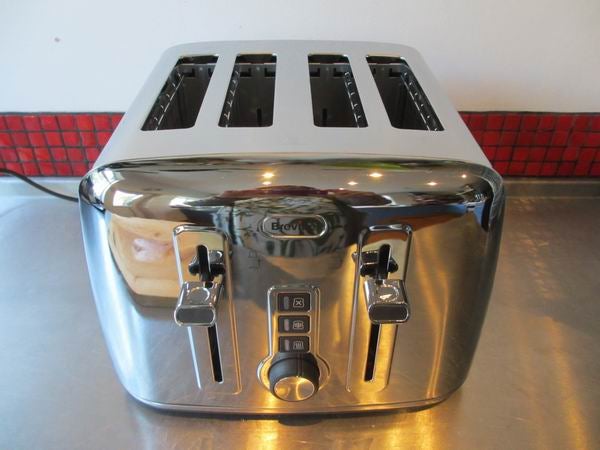 The Breville is big and chrome, with a shiny finish that loves to gather fingerprints but wipes down easily. It connects to the mains using an 80cm cable, that should be long enough for most kitchens.

It has four slots, each measuring 14.5 x 14 x 3cm. That means you can just squeeze in a 3cm doorstep. So much for this being “The Perfect Fit for Warburtons” – there are a number of rival toasters with bigger slots.

There are also buttons for defrosting/toasting bread straight from frozen and for reheating toast that’s gone cold. And there’s a cancel button that stops toasting – which means that you can use the levers at the front to lift the toast and inspect progress without interrupting it.

There are two crumb trays accessed at the back and the toaster’s feet are very grippy – this is one appliance that won’t slide around on the worktop. 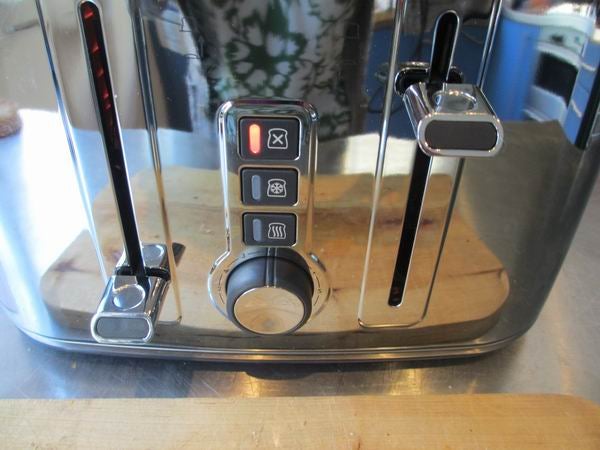 The Breville’s browning controls are numbered 1 to 9 but there are clicks in between, so it really offers 40 graduations of browning. There’s just one set of controls for all four slots.

The four slots are each just long enough for a tall slice of sliced bread to go on its side.

Its design grips even thin slices of toast very well. But the results are disappointing – I chose a middle-of-the-road 4 setting but toast was medium done on one side and slightly burnt on the other. 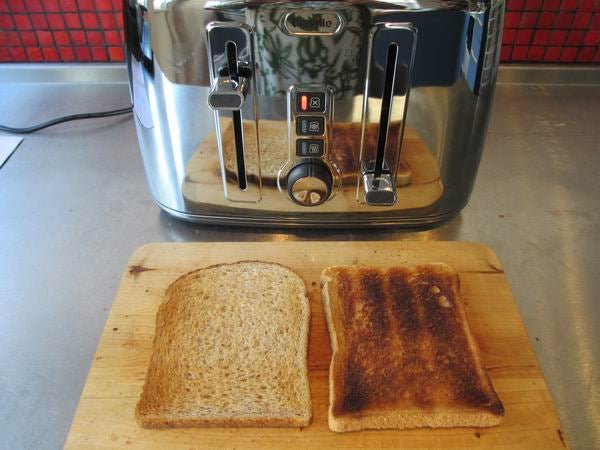 Yes, the Breville’s “lift and look” function helps prevent burnt toast but if your toast is cooked this unevenly something is wrong. I tried repeatedly in all four slots and found the bad results are consistent: The side nearest the middle of the toaster was always considerably more done.

Cancelling the toast when it’s ready is a delight though: Press the cancel button and it pops up beautifully, like an old-fashioned toaster. With practice you could probably even catch it mid-air to add flair to your breakfast routine. 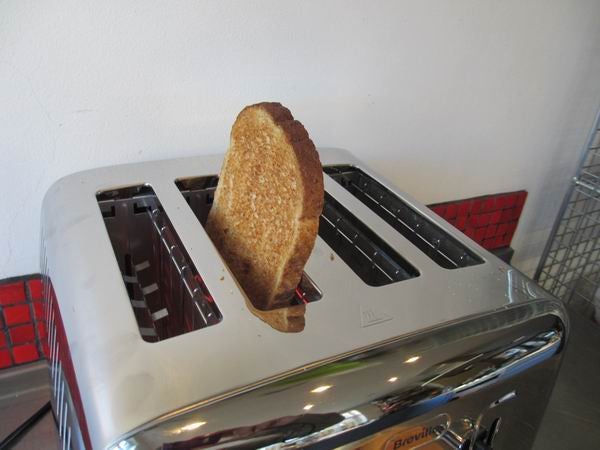 The toast sticks up plenty once it’s popped, so it’s easy to grab. Lift the handles and it pops up an extra centimetre, ideal for smaller stuff like muffins and crumpets.

Toasting bagels and muffins worked rather well once I figured out the Breville’s uneven toasting. I could put it so the cut side would get toasted more, for a soft underside. But that’s hardly a good thing. Should I buy the Breville VTT571?

No – its toasting is too uneven, so much so that if one side is sufficiently toasted then the other side is either completely underdone or starting to burn.

If you want your toast done on one side, look at the Dualit Brushed Architect Four-Slice Toaster with its bagel setting. If you just want a good four-slice toaster consider the Hotpoint TT44EAX0. And if you’re on a tight budget then cheap-as-chips Kenwood TTP210.

This four-slice toaster disappoints because its toasting is just too uneven.