What is the Hotpoint TT44EAX0?

The Hotpoint TT44EAX0 is a toaster offering digital controls. It fits in four slices comfortably and browns bread evenly. It even comes with a pair of warming racks for pastries and a bagel setting.

The results from the Hotpoint were very impressive. We’d have no hesitation in recommending it. 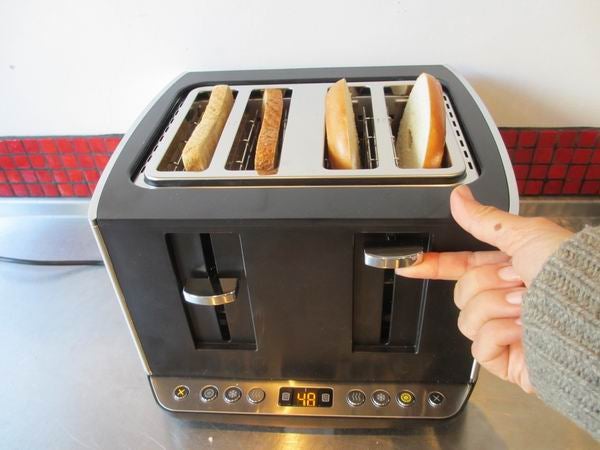 The Hotpoint TT44EAX0 is an attractive toaster. It sports a brushed stainless-steel finish on the sides and black plastic on the front and top. It’s also available in black, cream or red. On the downside, the design is rather chunky – it looks sizeable on the worktop, even though it’s no bigger than other four-slice toasters.

Its digital controls offer just eight levels of browning. Each pair of slots has a separate control, with a button you tap that cycles up and down through browning levels. The level is displayed as a number beside the button.

The toaster also includes buttons for toasting bagels, defrosting/toasting bread straight from the freezer and a cancel button that stops toasting.

A cable tidy sits on the underside of the unit, and the cable length is a generous 90cm from the right but 70cm if you’re plugging it in to the left.

Each of the Hotpoint’s four slots measures 14 x 14 x 3cm, so fitting in a 3cm sourdough doorstep was no problem at all. 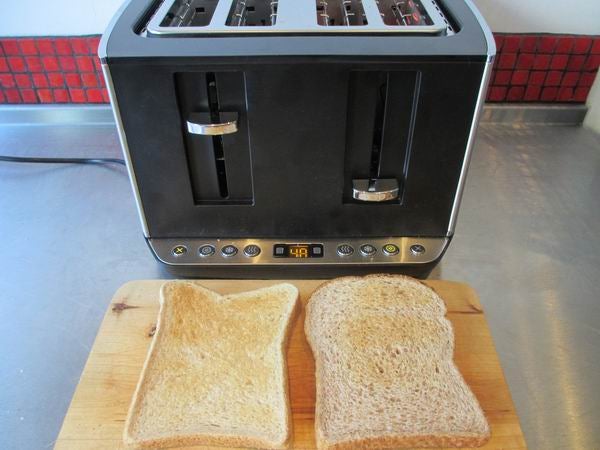 The toasting slots on the Hotpoint TT44EAX0 will easily hold a standard slice of bread horizontally. And as far as toasting is concerned, it was pretty even; the toast was slightly curved but consistently brown all over. The unit also provides the capability to defrost bread or reheat cold toast.

The bagel setting produced good results, but was counter-intuitive to use: the cut faces had to be placed outwards in the slots – facing away from each other – for them to be toasted on the cut sides. 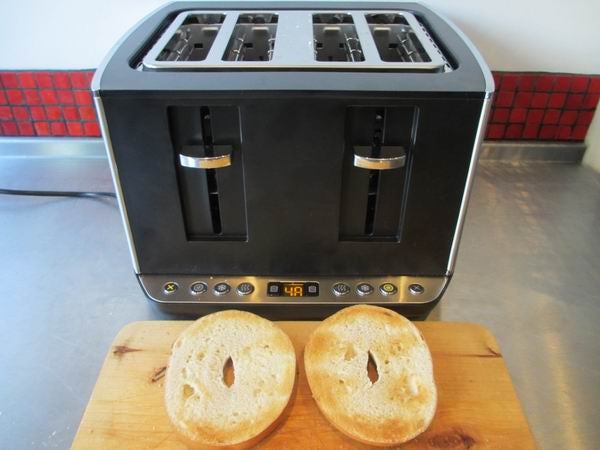 Bagel results weren’t quite as good as the Dualit Brushed Architect Four-Slice Toaster, lacking the perfectly soft undersides produced by this toaster.

The Hotpoint’s levers for each pair of slots work well: they push the toast up by a good 3cm, enough to make it easier to reach smaller items such as muffins and crumpets. 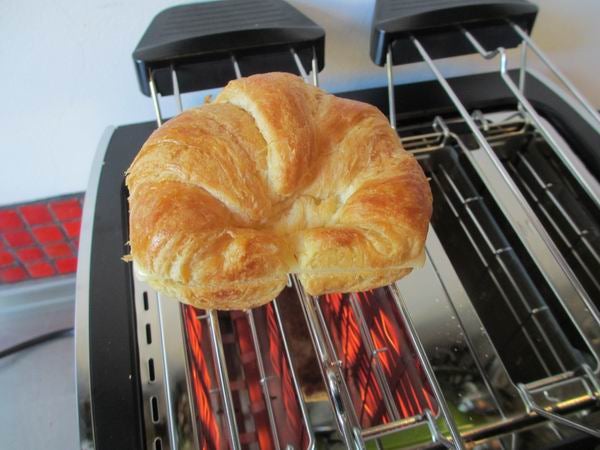 The warming racks are the best we’ve seen on a toaster. There are two, each measuring 20 x 6cm, allowing you to easily warm four pastries. What’s more, you can even lay a large loaf across both racks to warm it up.

Best of all, since the two racks are independent, you could toast in one pair of slots while warming pastries over the other. The results were simply superb: a cheese croissant was warmed well enough that the cheese melted and the top became warm, all without overdoing the underside. Should I buy the Hotpoint TT44EAX0?

Yes, it’s an excellent four-slice toaster at a very reasonable price. It does a great job of toast and pastries and its bagel setting is pretty good too.

If you’re happy to spend a little more then also consider the Dualit Brushed Architect Four-Slice Toaster. Or, if you need only a two-slice toaster then the cheap-as-chips Kenwood TTP210 is worth a look.

This four-slice digital toaster is hard to fault; it’s a veritable breakfast powerhouse.