If you look back over the years Bose has had a tough time on TrustedReviews and has never received a recommended award. The reasons are generally twofold; they tend to be overpriced and yet underperform sonically. Well now we have a Bose product we like, a lot.

The Bose Companion 20 is something all too rare from the company: a new product. The famed  Bose SoundDock Portable, for example, was released way back in 2007 and yet it remains largely unchanged while many of the competition is refreshed every 12-18 months. Bose may well choose to keep the Companion 20 unchanged for many moons, but as it stands we benefit from the company’s latest technical innovations and as such, in August 2011, it is a joy. 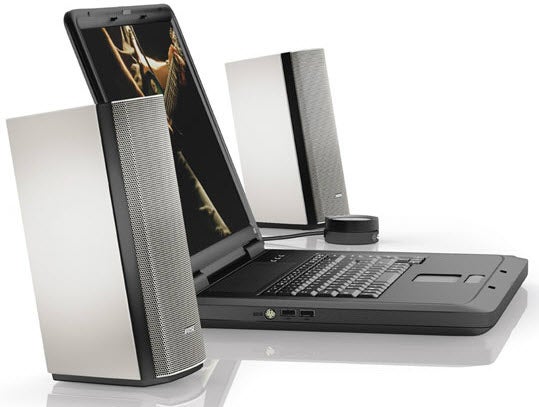 As the name hints (but doesn’t fully explain), the Companion 20 is a 2.0 speaker system, the familiar pitch being: there is no need for a separate sub woofer. Given the task at hand the speakers are fairly compact measuring just 219 x 119 x 89mm and weighing 1.13Kg each. They also couldn’t be simpler with no bass or treble adjustment and all operations confined to a simple ‘control pod’ that houses a touch sensitive power/mute button, second auxiliary input and headphone jack.

All told first impressions are positive. Build quality is excellent. The metal front grill and rear look good while Bose has steered away from the dreaded piano black to use more dust phobic matt finishes on the top of the speakers and around the control pod. The touch sensitive response of the pod’s surface (the entire metal top) is also excellent instantly turning the speakers on or off, a status illustrated by a white power indicator. The volume ring also oozes quality, feeling smooth but with a slight sense of inertia. 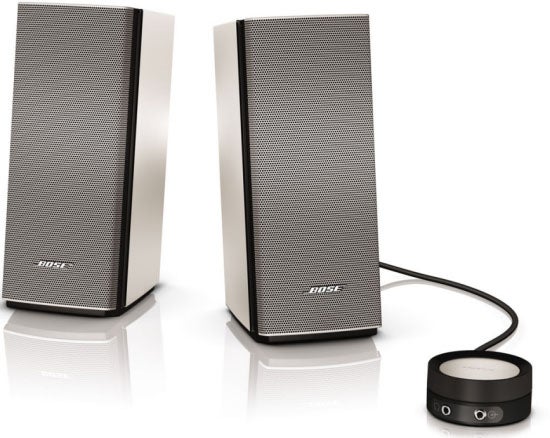 As well as useful for being easy to reach, having a separate pod is a good idea because any wear and tear on the volume ring means it can be easily replaced. By contrast controls on desktop speakers often are the first things to go and can be incredibly difficult to fix.

A further smart idea is the Companion 20’s automatic standby. Most desktop speakers remain permanently on, but the 20s will automatically go into standby if there is no audio signal after two hours. This energy saving feature can be toggled on or off by pressing the touch sensitive control pod for approximately six seconds which results in a high to low two tone chime. This chime is reversed when the feature is toggled back on by repeating the steps.

Enough of the superficialities though, the real interest lies in how they perform…

Bose is incredibly secretive about its audio technology (a strategy which wins as many enemies as fans) so no raw specs are provided. In fairness wattage is often as misleading as it is informative, but we are told the 20s do use a brand new driver along with proprietary electronics and amplification. Bose’s long standing ‘TrueSpace’ digital signal processing tech is also thrown in to expand the acoustic range and widen the perceived soundstage. Marketing buzzwords aside, does it work?

In short yes, and then some. Bose typically describes its sound as ‘rich’. Detractors say this equates to indistinct and muddy and there are certainly products where this is true, but the Companion 20s are a delight oozing drive and detail. Most surprising is the volume. Despite their small size and 2.0 arrangement the 20s will not just fill a room, but an entire floor before hitting maximum volume. They will also vibrate your windows. 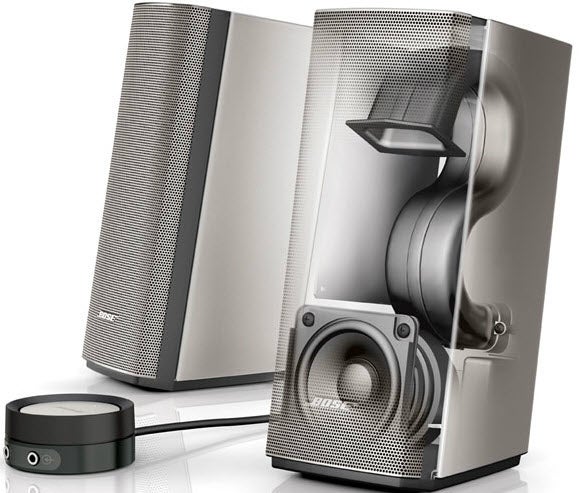 Purists will miss the ability to tweak bass and treble settings as Bose retains an Apple-esque vice control over its products, but the sound signature is very well balanced. If anything the 20s are slightly bass heavy, a remarkable achievement given they obviously have no dedicated bass unit. That said they don’t lack detail and classical music aficionados will be just as satisfied as bass heads. As mentioned at the beginning of this review, we have no idea how regularly Bose will refresh the Companion 20 to fend off rival products in future, but right now they are outstanding.

Of course this wouldn’t be a TrustedReviews Bose test if we didn’t have a few caveats. As mentioned, some treble and bass control would be welcome, particularly for those that may want to peg back the bass a little. In addition, while we are big fans of the pod control, a separate remote control, such as on the Teufel C 300 Wireless, would have been a welcome alternative and – for the price – an inbuilt wireless audio solution would’ve been nice. But, with the Bowers & Wilkins MM-1 costing around £400, these are hardly overpriced for a basic 2.0 speaker set. 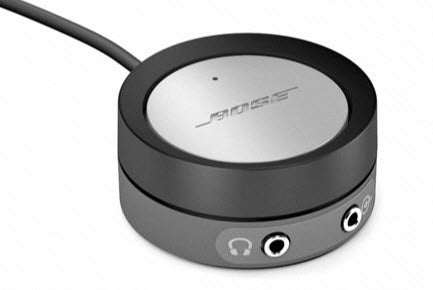 Of course, there ”is” no doubt £200 is a lot to pay for a 2.0 setup with some 4.1 and even 5.1 systems available for less. But that said the Companion 20 isn’t so much about price comparison as product comparison. Not everyone desires or has the space for 4.1/5.1 or even 2.1 setups, but they crave high quality audio. In this respect Bose has come up with a real winner and the standard two year warranty offers some compensation against the initial outlay.

While Bose products have fallen foul of us in the past, the Companion 20 has knocked our socks off. The sheer volume and drive produced by these 2.0 speakers is astonishing and bass, if anything, is fractionally more prominent than it would be in a typical 2.1 arrangement. As always Bose has slapped on a premium price, but the Companion 20 can go head to head with iPod docks twice the price and connect to your phone/MP3 player and computer simultaneously. If your wallet is deep and your space limited you can’t go wrong.