Bowers & Wilkins is on something of a roll. With the Zeppelin and Zeppelin mini iPod speaker docks, the P5 headphones and now the MM-1 PC speakers adding to the company’s already enviable legacy we’re starting to wonder whether they’ll ever build a bad piece of audio equipment.

The Bowers and Wilkins MM-1 speakers definitely look the part. The combination of the spun aluminium top plate and accents with a black cloth grille is minimalist, but far from plain. Really these speakers shouldn’t be allowed on any old desk, but only on glass (or at a push vintage wood) surfaces framing a 27in iMac – probably in a museum of modern art. They’re more deserving of entry than anything spewed forth by Tracey Emin, for certain.

Don’t be fooled into thinking that minimal equates to unsubstantial, though. The price certainly isn’t. At £399 a pair the MM-1 speakers will prove well out of reach of many. But as we often have to point out with ostensibly expensive products – value isn’t in the price.

There are numerous details that show just how much thought has been put into the creation of the MM-1s. The cable running from left to right, for instance, seems particularly sturdy, and the (plastic) base of each speaker has a small cutaway to accommodate the wiring as well as a small space to hold it. If you don’t need the full length, you can stow the remainder away in this cavity, which is a neat idea. 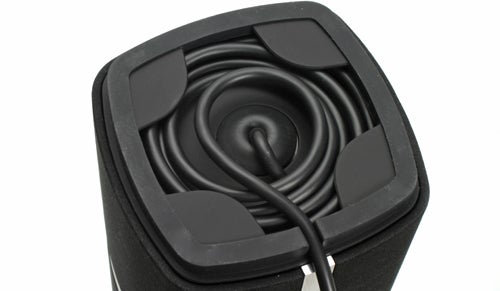 The cable joining the two speakers together is fairly short, and no extension is available or easily possible as a proprietary connector is used. This is by intent, as the MM-1s are near-field speakers. As the descriptor suggests, this means that the sweet spot of the MM-1’s – the point at which you should place yourself to hear them at their best – is close to them. This is in contrast to traditional Hi-Fi speakers, from which you’ll generally want to place yourself a fair distance to get the best results. Moreover, being PC speakers, the MM-1’s obviously benefit enormously from this near-field design, as it’s pretty much impossible to place them on a desk in an unfavourable position.

The left hand speaker does nothing more complicated than radiate sound. The right hand unit, conversely, accepts the MM-1’s mini-USB input, the cable from the left speaker and the power input. The presence of a USB port is important to note, because it is via USB that the MM-1s get audio from your PC.

Bowers & Wilkins’ choice to use USB is undeniably a smart one. It’s no secret that most PCs don’t have stellar audio outputs. The majority rely on soundcards integrated onto their motherboards, which, while fine for catching up on the occasional episode of Glee on 4oD, will hardly do justice to the likes of Bach or Mozart.


To circumvent this issue, the MM-1s have an internal DAC, to deal with the important business of turning your digital files into music. This puts any system to which a set are connected – be it running Windows or Mac OS – on an even playing field. It’s a technique that worked well for the Teufel Concept B 200 USB Speakers – the next best thing if you can’t afford the MM-1s. 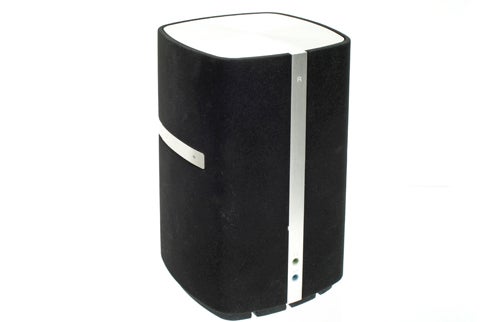 Another consequence of these speakers using a USB connection is the included remote can be used to play, pause, and skip tracks in your chosen media player (iTunes and Windows Media Player are supported). It can, of course, control volume as well, and has a mute button. The remote control is the same size and shape as that bundled with the Zeppelins.


The Bowers & Wilkins MM-1s don’t just rely on fancy electronic wizardry. Inside their sublime exterior nestles technology derived from the company’s trademark Nautilus speakers. The 1in tweeters use the same tube-loaded design featured by B&W’s flagship speakers, reducing resonance and, by extension, delivering purer high-end notes. And while there’s no dedicated subwoofer, there are 3in woofers mounted in each unit to handle the mid range and bottom of the audio spectrum 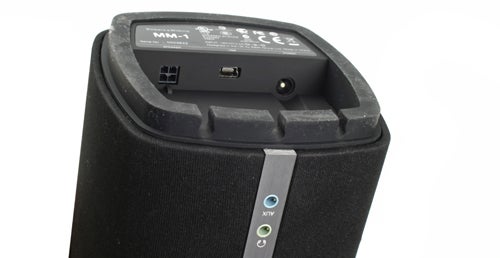 Raw specifications don’t come anywhere near describing the output of the Bowers & Wilkins MM-1 speakers, though. Certainly, the low end isn’t as deep and thumping as it is with some 2.1-channel systems, but it trades immediacy of impact for a smoothness and warmth that’s far more enjoyable to listen to in the long run. Mid- and high-end notes are equally well-delivered, coming across with excellent clarity and poise.


The overall impact is to allow you to simply sink into your music as into a warm bath, simply letting album after album wash over you like so many soapy suds. The MM-1’s are equally at home with the grungy tones of Nirvana as they are with the swinging jive of Frank Sinatra, the haunting melodies of Poe or the striking compositions of Wagner.

The MM-1s do an excellent job of making compressed music sound decent. 320kbps MP3s sound great and even the half-dozen 256kbps AAC (iTunes Plus) tracks we have sounded pretty decent. Really low bit-rate tracks can suffer, but we’re talking 128kbps WMA streaming audio here and the kind of person who would put such files through a £400 pair of speakers more than occasionally frankly doesn’t deserve the gift of hearing.


Stepping up to some 24-bit FLACs did reveal extra elements of detail to Beethoven’s 9th, among other, similarly epic tracks. The transparency the MM-1s deliver is particularly noteworthy; you can really get a feel for where in the mix each and every element was mastered, whether a cello, a flute, a viola or a xylophone.

Films and TV shows sound equally as good as music, with an episode of Doctor Who showcasing the MM-1’s ability to turn their hand to producing clear dialogue, enveloping atmospherics, and luscious accompanying music. The lack of a large sub-woofer means you don’t get quite the ground-shaking rumble of some speaker sets, which can dull the impact of action-packed films, but then for the best home cinema effect you’re going to want surround sound and a comfy sofa anyway.


Bowers & Wilkins hasn’t limited the MM-1 speakers to only accepting input from a PC, over USB. The right-hand speaker has an aux-in and headphone output around the back. The former lets you hook up just about any device, mixing its audio with that from your PC. 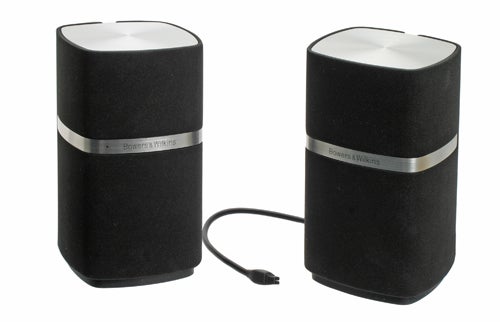 The headphone output is a little niftier as it lets you take advantage of the MM-1’s excellent audio processing when using a set of ‘phones – the speakers mute automatically when you plug in your headphones. The results are impressive, with a set of trusty Shure SE420 earphones sounding miles better via the MM-1’s than through the iPhone they’re usually subjected to.


Flourishes like this are what enable the Bowers & Wilkins MM-1 speakers to justify their admittedly significant asking price. It really shouldn’t be possible to make a set of desktop speakers sound this good, but somehow B&W has. Maybe it’s just us, but we think quality like this is worth paying for.


There was never any doubt in our minds that the Bowers & Wilkins MM-1 speakers would be something special and, lo and behold, they are. They look stunning and sound even better – truly, PC audio has never had it so good.