The brains behind the Pocket Cinema Camera 6K Pro, Blackmagic Design, has been a staple in the world of video production for years. The company started with components and software in 2002, then moved into creating the wildly popular URSA camera line for pro-grade videographers.

But with an unapologetic focus on video quality over optional extras such as continuous autofocus and in-body image stabilisation (IBIS), are the omissions out of the gate enough to put more casual videographers and YouTubers off the 6K Pro? Or is this still one of the best cameras around?

The Blackmagic Pocket Cinema Camera 6K Pro weighs 1.2kg, which is more than double the weight of cameras such as the Sony A7C – Sony’s ‘budget’ full-frame offering – and that’s without any lenses, battery grips or accessories. In turn, it’s a big bit of kit, but it’s also super-capable.

For starters, unlike traditional mirrorless cameras, the Pocket Cinema Camera 6K Pro sports a huge, 5-inch tilt-screen around the back. It’s always been a mystery why video-focused cameras such as the Sony A7S III and FX3 have small 4:3 touchscreens, but the 6K Pro’s ample 16:9 offering is excellent, and justifies a good portion of the heft. 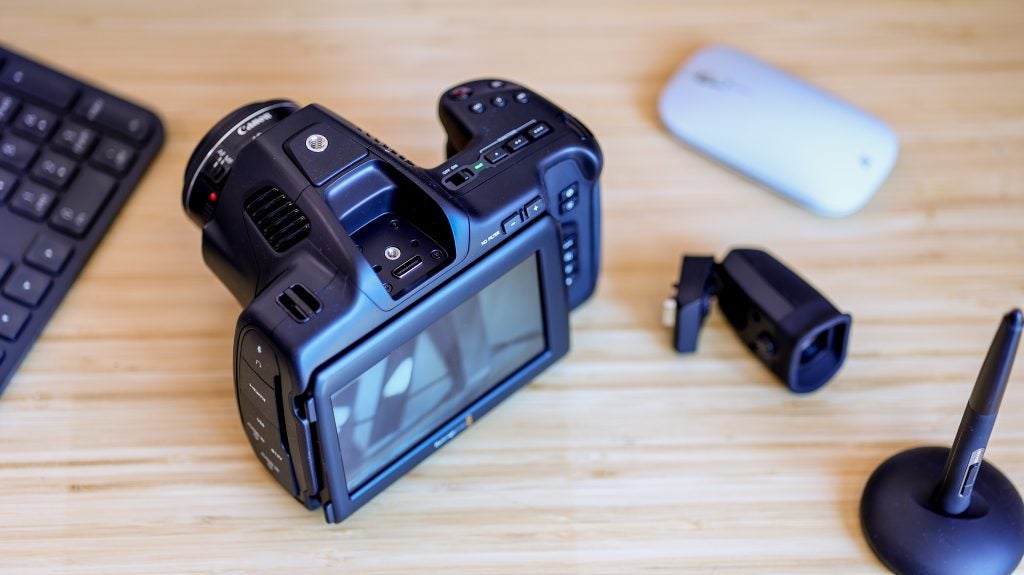 A focus on video is a constant with the Pocket Cinema Camera 6K Pro’s design. There’s no pop-up flash, wireless shutter-release slot, pre-fitted EVF or hot shoe. Heck, there isn’t even a cold shoe here. What you do get, however, is a wonderfully comprehensive suite of ports.

Three flaps sit on one side of the camera, covering microphone in, headphone out, full-sized HDMI, USB-C, 12V power, and two mini XLR ports. This is a step above hybrid shooters such as the Canon R6, with better audio solutions and no fiddly micro- or mini-HDMI ports, and is exactly what a videographer needs.

On the top of the camera is one standard tripod thread, brought more forward than on past Cinema cameras to make room for the optional EVF. To the right is a power toggle, three function buttons that are customisable – you can set them to apply LUTs, zebra lines, focus peaking and more. There’s also quick access to ISO, shutter speed, white balance, and capturing a RAW still, plus a large, easy-to-find record button.

The rest of the buttons are on the back of the camera and include auto-exposure and focus, quick toggles between slow and high frame rates, magnification, menu, and gallery, where you can view your clips. There’s also another record button on the front of the camera, and one on-display, providing three ways to fire-up video recording. The most notable new addition is a pair of ND filter toggle buttons, so you can mechanically pull back up to six-stops of exposure, and these do a fantastic job of helping out with outdoor videography on a sunny day. 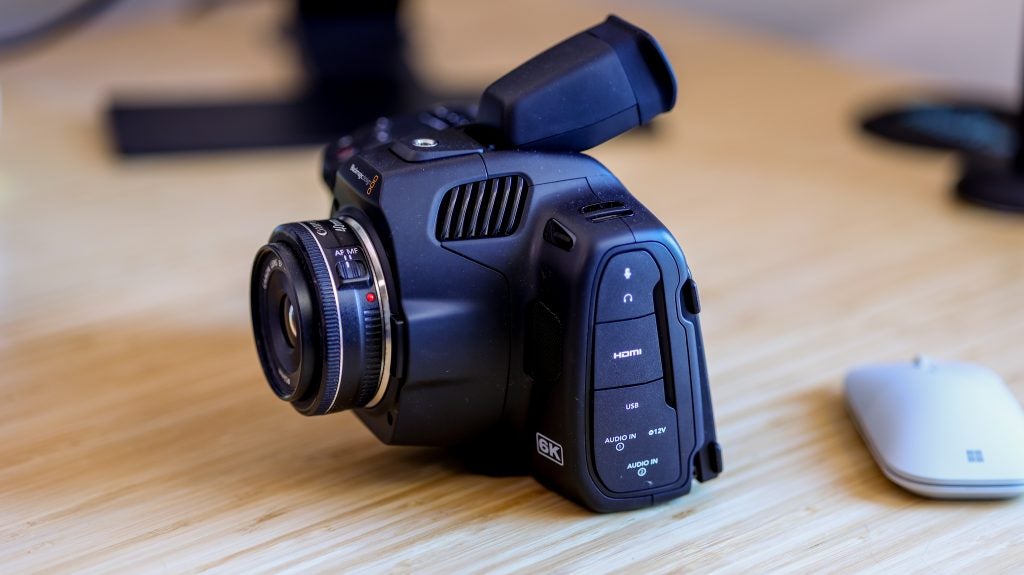 On the subject of the great outdoors, the camera isn’t weather-sealed. In addition, its outer casing is entirely plastic, so loses out on some fit-and-finish flourishes of some competing hybrids, and devices such as the Sony FX3. However, you’ll find a huge vent on either side of the lens fitting to help the camera keep its cool, and it definitely feels solid. Also worth noting, at the base are two tripod thread fittings rather than just one, as found on the Pocket Cinema Camera 4K.

One of the best things about the Pocket 6K Pro is its huge tilt-screen. At first glance, it’s identical to that of the 4K and 6K, sporting the same size and resolution, but the 6K Pro’s screen has two major advantages: it tilts and gets much brighter.

Starting with the basics, the screen is an LCD panel with 1920 x 1080 resolution – very sensible for a video camera. It’s responsive to the touch, and sports the same UI as found in Blackmagic’s more premium camera line.

The Pocket Cinema Camera 4K and 6K screens were incredibly dim, virtually unusable outdoors and in bright environments, and were only really there for reference. I would find myself needing to hook-up an Atomos Ninja 5 most of the time. Now, it’s much less of an issue. 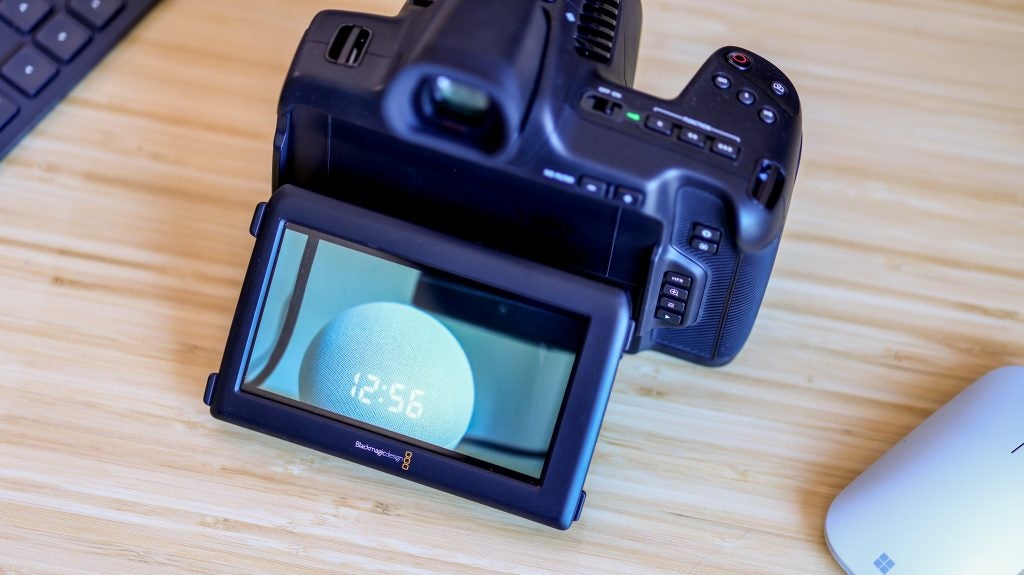 The interface still retains its highlights from past cameras, though. It’s touch-optimised, with big, easy-to-navigate menus tailored for videographers. If you’re fresh to video cameras, there will be a steep learning curve. Getting your head around switching out between shutter angle and shutter speed, shooting in log and more.

That said, if that’s what you’re after, the Pocket Cinema Camera 6K Pro’s screen and UI give you everything you could ask for, with one exception – I wish I could delete individual clips in-camera.

Upgrades usually bring with them boosts when it comes to performance, but the Blackmagic Pocket Cinema Camera 6K Pro is exactly the same as the 6K when it comes to video-recording quality. It also misses out on in-body image stabilisation and a fully articulating screen.

In addition, Blackmagic hasn’t improved the autofocus on the 6K Pro. That means there’s zero continuous autofocus while filming video, and the autofocus – which can be activated with a long-press of the touch-display or the autofocus button – is clumsy by comparison to that from Canon and Sony, creeping forward and back with little in the way of finesse.

Video quality is also supremely editable, with 13 stops of dynamic range, and pre-set LUTs that can be applied when you want a preview of what your graded footage will look like. With a larger sensor than the Blackmagic Pocket Cinema Camera 4K, the 6K and 6K Pro capture footage with a shallower depth of field and a slightly wider angle of view than Micro Four Thirds cameras, adding an even more cinematic flair when matched with the right lens.

On the subject of lenses, the Pocket 6K uses Canon EF glass, and so too does the 6K Pro. This means anyone with an existing Canon lens collection would naturally be better-served with a 6K, over the original Cinema Camera 4K.

There are also some meaningful additions missing from past models that give the Blackmagic Pocket Cinema Camera 6K Pro its 2021 flex. The most standout is an incredibly handy ND filter, something very few mirrorless cameras sport. Press the plus or minus buttons above the touch display, and the ND filters slide over the sensor in sequence, at either two, four, or six stops. This means I can keep the apertures wide in bright scenes, without having to screen a lens-mounted ND filter on.

Another highlight of the 6K Pro is its battery life when compared to the 4K and 6K. With a new 3500mAh NP-F550 battery, which sports a higher capacity than the 2000mAh Canon LP-E6, the camera powers through the 35-minute mark, which occasionally got the better of older models, and edges nearer a full hour.

The Blackmagic 6K Pro charger also keeps the camera alive even when recording, which is perfect for long indoor shoots. If you fancy splurging on an optional extra or two, the new battery grip that adds another two NP-F550 batteries to the equation, helps the camera make it to around three hours.

Traditionalists can also pick up an OLED electronic viewfinder, which sports a 1280 x 960 resolution, 3.68 million dots, and ships with four eyepieces. Having used it extensively, its pivot angle is vast (around 75 degrees) and, despite its steep price at £510, it’s a quality addition to the 6K Pro’s video experience.

Thanks to a dual-card slot, the 6K Pro shoots to either a high-speed SD card, or to a CFast card. As with previous Pocket Cinema Cameras, the Pro also records directly onto an external hard drive via USB-C, which could end up saving you a small fortune on removable media.

Perfect for prosumer filmmakers, the Blackmagic Pocket Cinema Camera 6K Pro is a beautiful refinement on a winning formula.

Despite the same best-in-class video quality available on the standard 6K and a bunch of extra features, the lack of continuous autofocus will throw anyone who wants a do-it-all camera.

You should buy the Blackmagic Pocket Cinema Camera 6K Pro if

The Blackmagic Pocket Cinema Camera 6K and 6K Pro are as good as it gets for the price, provided you want manual everything. Made for videographers and filmmakers, its connections are stellar, its battery life improves upon its predecessor, and the tilt-screen is best-in-class for a video capture on-body display at the price. Add new ND filters and modular accessories, and the extra cost will be easy to justify for many.

With its EF lens mount, the Pocket 6K Pro works beautifully with manual-focus, old-school cinema lenses that are cheap and cheerful, while also playing nicely with fast, new glass made for Canon’s full-frame cameras.

You shouldn’t buy the Blackmagic Pocket Cinema Camera 6K if

The Blackmagic Pocket Cinema Camera 6K Pro is a hefty beast, weighing more than double some mirrorless cameras such the Sony A7C, and sporting a much heftier frame than the likes of the Canon EOS R6.