What is the Blackmagic Pocket Cinema Camera 4K?

Aimed at professional filmmakers and enthusiastic hobbyists, the Blackmagic Pocket Cinema Camera 4K is a compact video camera that’s able to capture movie-quality footage at a variety of resolutions and frame rates.

With a Four Thirds digital sensor and a Micro Four Thirds lens mount, it’s able to use a wide variety of existing lenses and record footage to SD and/or CFast card, or an external device via its USB-C port. 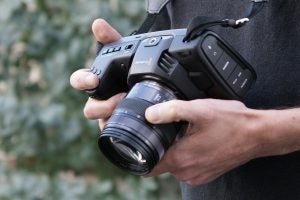 Don’t be fooled by the name, though – if there’s one thing this isn’t, it’s a camera that will fit in your pocket. Unless, perhaps, you’re wearing some sort of voluminous, flowing wizard’s cape.

Luckily, that chunky frame does at least contain some rather special video-shooting powers…

The Pocket Cinema Camera 4K, which we’ll also refer to as the PCC 4K, is built for function rather than to attract admiring looks.

It’s a strange-looking device, similar to a system camera in shape but with fewer dials, no viewfinder, a huge screen and a second tripod screw mount in the place where the hot shoe would be.

If we were feeling uncharitable, we’d call it ugly; but we don’t think any potential buyers reading this would care. Nobody buys a Blackmagic camera for its ability to turn heads in the pub garden. They buy one because it’s a reliable, powerful filmmaking tool. 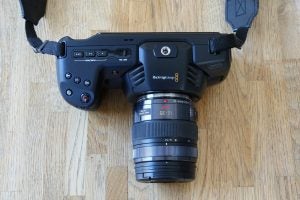 To that end, the design serves its purpose, with the hard outer body (a carbon-fibre/polycarbonate composite, which keeps it super-lightweight) feeling suitably sturdy. This is despite the abundance of plastic and the somewhat flappy doors that cover up the battery, card slots and various inputs and outputs.

This isn’t a camera that demands being handled with kid gloves – you can bung it straight into a rucksack or the boot of a car without having to worry too much about bits falling off. There’s no official weatherproofing, though, so pack a plastic bag if you’re planning on any rainy-day shoots. There are mounting points at the bottom for a tripod and at the top for other accessories. 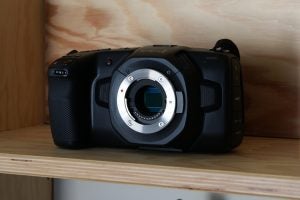 The PCC 4K uses a Four Thirds sensor and the same Micro Four Thirds lens mount system as Panasonic’s Lumix G range and Olympus’ PEN and OMD ranges. As such, any lenses made for those camera’s should be fully functional here. Blackmagic lent me a Panasonic 12-35mm f/2.8 lens for the purposes of this review, and I found it to be a pleasingly versatile, lightweight pairing.

Connectivity is impressive, with a full-size HDMI Type-A output, a mini-XLR audio input (switchable between microphone and line level), a 3.5mm stereo input, a 3.5mm headphone jack and USB-C (for firmware updates and external recording). There’s also a 12V power input, if you want to run the camera from mains power instead of a battery.

In terms of storage, you have options here. If you want to keep things fully internal, there are two card slots: one for SD UHS-II cards, one for CFast cards. Alternatively, the previously mentioned USB-C 3.1 port can also be used for external recording to a portable hard drive or SSD.

The 1920 x 1080 LCD screen is huge for the size of the camera – at 5 inches from corner to corner, it’s far bigger than the 3- and 3.2-inch displays you find on most compact system cameras. 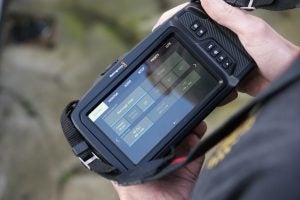 That large size is particularly useful here because, with no electronic viewfinder (almost essential for stills shooting, but only occasionally useful for videographers) it’s your only on-board means of composing and reviewing your shots, not to mention changing settings.

While most cameras use the screen’s touch capabilities primarily for autofocus point settings, this isn’t possible here. Instead, after hitting the physical menu button on the back, you can flip through several clearly laid-out screens, tapping on options to choose or adjust various settings. The large screen means the buttons can be a good size, so even users of a sausage-fingered persuasion should be happy.

Perhaps the biggest gripe we have with the Blackmagic Pocket Cinema Camera 4K is its lack of in-body image stabilisation. You can use Micro Four Thirds lenses with built-in optical image stabilisation to get around this to a degree – but, in general, you’re going to want to use a tripod, a gimbal or a very steady pair of hands when shooting. If you’re an enthusiast filmmaker, that probably isn’t a huge ask. 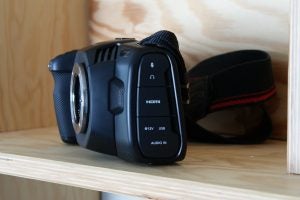 Autofocus is also extremely slow, and there’s no continuous autofocus or tracking autofocus at all. Again, for pros and knowledgeable hobbyists, manual focus is likely to be the preferred option anyway – this isn’t a vlogging camera in any way, shape or form.

That said, like in-body image stabilisation, these are features you’ll find on most video-centric mirrorless cameras. Do be aware that you’ll be expected to do a lot more work yourself with a Blackmagic than with a Panasonic GH5S or Sony A7 III. 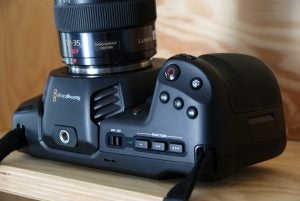 In terms of control layout, I’m super-impressed. When you’re holding the camera, the iris and autofocus buttons are well located for your right thumb while ISO, shutter speed, white balance and stop/start recording are within reach of your right forefinger.

There are also three customisable function buttons on top, and at the back is a button to switch between high frame rate and regular recording. And, even though you shouldn’t really be using this camera to take photos, there’s a button to capture Raw DNG stills at 8-megapixel quality. 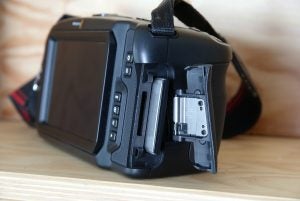 The one control I’d relocate if we worked for Blackmagic would be the power switch, which sits in a slightly awkward position near the centre of the top of the camera. We’d prefer it closer to the right for easy thumb access, since that would allow the camera to be turned on and off a lot faster and users would be less likely to miss fleeting moments.

One thing that you’ll need to keep a close eye on is the battery indicator, because each battery (the PCC 4K uses LP-E6 batteries, as do Canon DSLRs) won’t last particularly long here. Shooting 4K at 24fps to an internal card, you’ll get perhaps an hour of footage per charge – shooting at higher frame rates or to an external device will drain power even faster. Ff you’re planning on a long shoot, then, you’ll want to pack a few spare batteries.

Here’s the real make or break question: how does the Blackmagic Pocket Cinema Camera 4K perform? The answer: incredibly well.

Considering its relatively small sensor size, I was blown away by its capacity for shooting low-light material at high ISOs, and for its ability to recreate colour and detail. Have a look at the test clips below to see what it can achieve with minimal editing, no colour grading and a few minutes on the beach.

With such a huge range of shooting options, I couldn’t hope to explore all of its capabilities in my limited time with the camera, but for testing purposes I mostly shot in lossless compressed Blackmagic Raw 4K format at 60fps (converted in-camera to slow motion 24fps here), which was then rendered into an MP4 file using Blackmagic’s own DaVinci Resolve desktop app.

Since Blackmagic RAW is non-destructive (much like Raw stills taken with a camera), it can be edited and tweaked to a huge degree on your computer afterwards, and that’s another reason I see the PCC 4K as a true professional’s tool compared to less flexible mirrorless cameras that also record in 4K.

The Pocket Cinema Camera 4K isn’t as easy to live with as the many video-centric mirrorless cameras to which it will be compared – the likes of the Panasonic GH5s or Sony A7 III, for example. It’s slow to autofocus, it won’t continuously autofocus at all, its battery runs down fairly quickly, it’s next to useless for still photography, and it’s pretty unwieldy. 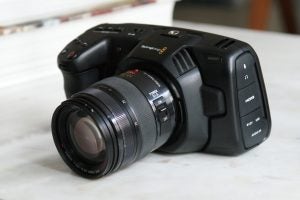 And yet it shouldn’t really be compared to those at all, because it’s almost in a category of its own: pro-level movie maker’s cameras that are as small as mirrorless cameras. In this class, it’s hard to think of anything else that can do what it does, with its superb low-light performance and Raw video performance making it seem like a bargain at the price.

For more general users, a mirrorless system camera makes far more sense. But for filmmakers who don’t care about stills and have the knowledge to make the most of its capabilities, the Blackmagic Pocket Cinema Camera 4K is a hugely impressive and flexible creative tool.