What is the Panasonic Lumix GH5S?

The most expensive model in the Lumix G compact system camera range, Panasonic’s GH5S is designed primarily with video in mind: it’s able to capture 4K footage at up to 60fps, with Hybrid Gamma Log HDR and no limits on the recording time per clip.

While its Micro Four Thirds sensor’s 10.28 megapixels might seem underwhelming on paper, each of the pixels is physically large in order to capture more light, making the GH5S suited to low-light work.

It’s fair to say that for those primarily shooting stills, there are other options that make far more sense. The Panasonic GH5S is a video-first camera, and billed as one of the best of its type.

The GH5S was originally released in January 2018, but we’ve reviewed a model with the latest firmware (which brought over 15 improvements in May 2018) to see if it’s still our favourite video-shooting system camera. 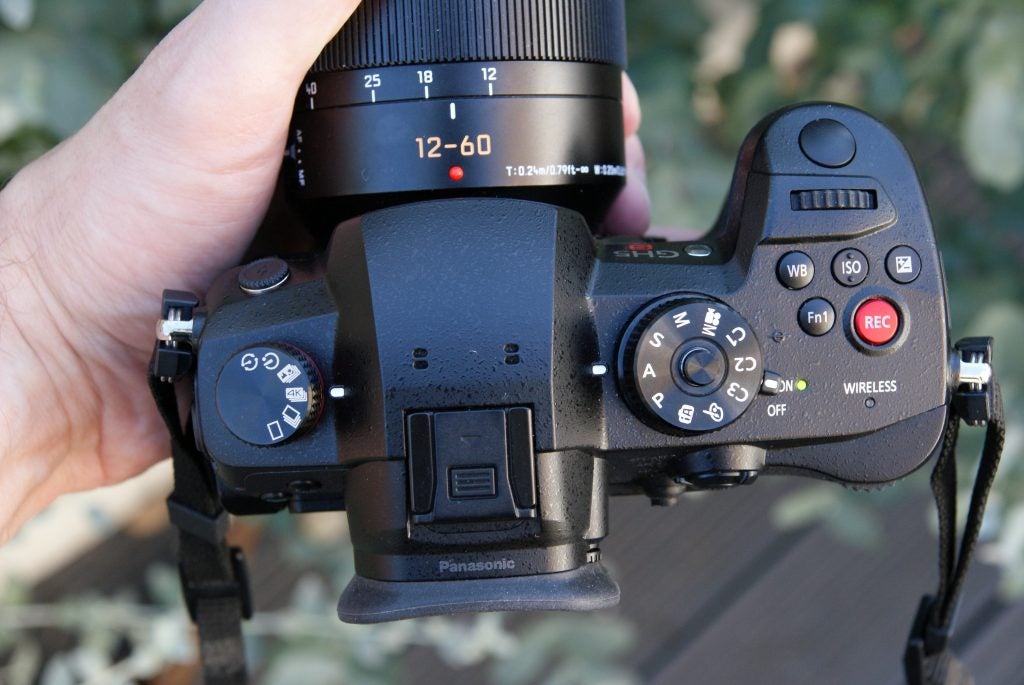 With its classic DSLR shape, the GH5S is unashamedly utilitarian – there’s a sizeable grip for your right hand and a large bump on top to accommodate the viewfinder and the hot shoe.

It works well, mainly because the camera’s compact size and light weight make it far more portable than an actual full-size DSLR. Rest assured that, with a reasonably-sized lens attached, this is a camera you can lug around all day without giving yourself a sore neck (and to that end, a comfortable, wide neck strap is included in the box).

The sturdy metal body is weatherproof – it can withstand dust, splashes of water and temperatures of up to -10 degrees Celsius – and mostly clad in a textured rubbery material to aid grip.

There are two large, chunky dials up top – one for selecting general shooting mode (including three user-customisable presets) and another that lets you switch quickly between single, burst, 4K, post focus and self-timer modes, plus two adjustment dials (one for your thumb, one for your forefinger), a thumb joystick and 13 buttons (including five customisable function buttons).

In other words: there are a lot of controls, all of them easily accessible. Once you’ve become familiar with them, you’ll be able to tweak, adjust and tailor your shooting experience very quickly. And that’s not even including the touchscreen controls… 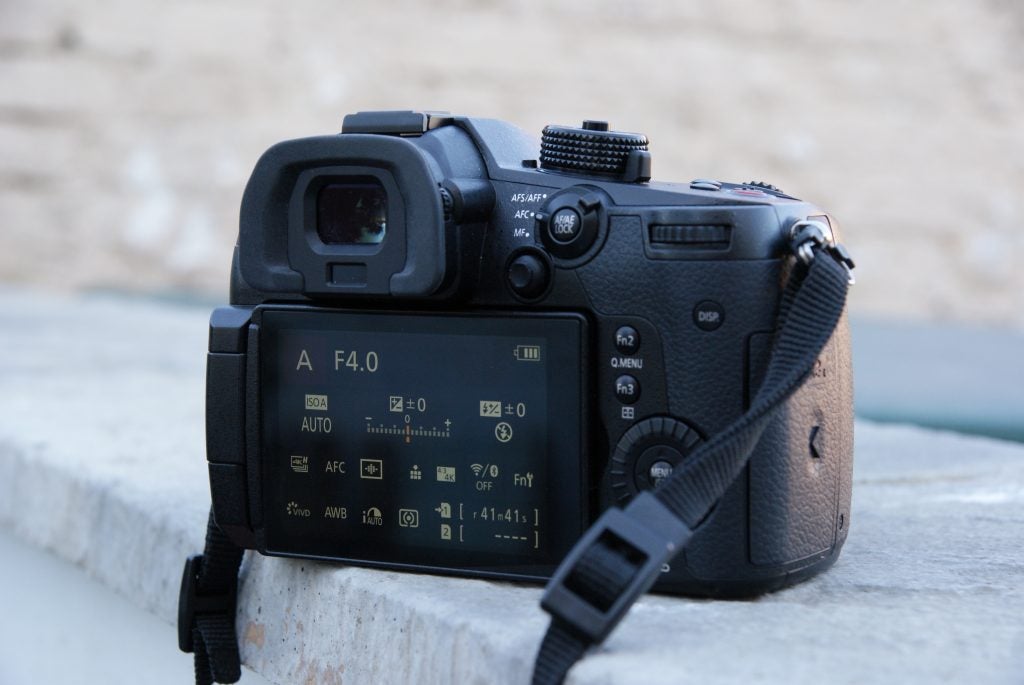 The 3-inch touchscreen is handy for setting focus points with the tap of a finger, and it lets you tweak other functions too.

You can flip it out to the side and rotate it to face frontwards (useful for would-be vloggers and selfie addicts). It’s bright and clear enough to be genuinely useful outside on a sunny day.

If you’re finding the glare a little too much, you can switch to the excellent OLED viewfinder instead. Crisp, clear and lag-free, it’s a joy to use whether you’re reviewing old shots or composing new ones.

For both the screen and viewfinder, you get a range of display options to cycle through, including a handy on-screen level to ensure you’re not shooting with a distracting canted frame. 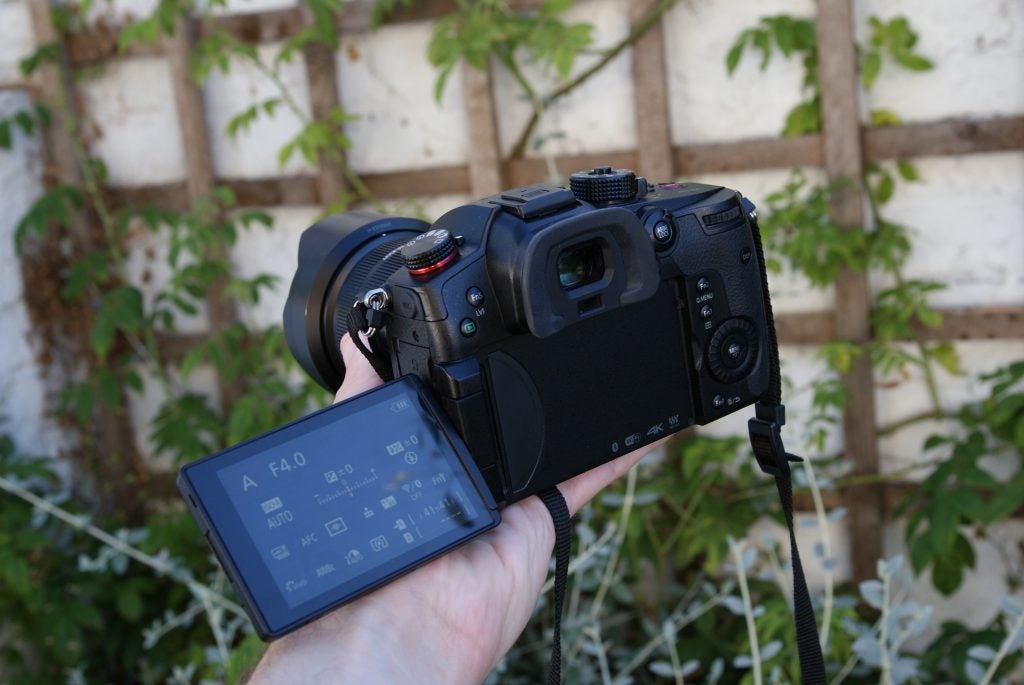 The Panasonic GH5S is an excellent camera to use: its controls are well-placed and intuitive, allowing you to switch up your shooting style swiftly – even from video to stills and back again.

It also comes with an impressive autofocus system that’s both fast and accurate. There’s laser-like tracking and intelligent face detection, all of which removes a lot of the potential trouble spots when shooting video. Switch to tracking mode, tap your desired subject on the touchscreen and the GH5S will keep it in sharp focus as it (or the camera itself) moves, seemingly 90% of the time.

We should also mention the handy 4K photo mode. This reduces stills resolution to 4K (at around 8 megapixels, which isn’t a lot less than the GH5S’s maximum 10-megapixel resolution) and allows you to shoot in bursts of 60fps or in “post focus”, whereby you can select a photo’s focus point having already shot it. You may not need either that often, but they’re useful to have.

Filmmakers, meanwhile, will feel spoiled by the number of options available. You can record 4096 x 2160 Cinema 4K footage at 50 or 60fps, with no limit on the recording time, or 1080p footage at up to 240fps for buttery smooth slow motion playback.

Other video-centric treats include internal 4:2:2 10-bit recording (designed to offer far better tonal shifts in footage) and the ability to record HDR footage in the Hybrid Log Gamma format – just make sure you have access to a TV or monitor able to display it. The sensor is also able to shoot in different aspect ratios – 3:2, 4:3, 16:9 and 17:9 – without needing to alter focal length.

On the hardware front, dual SD card slots mean you potentially have bags of space for all that video (a must when bitrates go up to 400Mbps). And the full-size HDMI output makes connecting to a screen for playback – or an external device for recording – very easy.

A resolution of 10.28 megapixels seems piffling by today’s standards and, as a stills camera, the Panasonic GH5S is hampered by its low sensor resolution. Colours are bright and vivid in fresh-out-the-camera JPEGs, but detail is lacking: zoom in just a little on your screen and you’ll see a surprising lack of sharpness for such a high-end system camera.

A lower number of megapixels often means better low-light performance instead (as each of the sensor’s pixels is larger and more sensitive to light). But the noisy, grainy images I shot at night suggest that’s not particularly noteworthy here either – at least not with the 12-60mm f/2.8-4.0 lens I was using. There are much better alternatives in this price range for stills shooters, whether you want to shoot in the dark or daylight.

The GH5S’s video quality is a different story, though. Watching its 10-bit C4K footage and Hybrid Log Gamma HDR material on my 49-inch 4K TV was a revelation. With me sitting just two feet away from the screen, the 10-bit footage displayed astoundingly clean tonal shifts and lifelike detail, with zero signs of compression – and that’s before any colour grading or even minor tweaks.

I’ve never seen footage this clear, sharp and natural-looking from a camera as small and affordable as the Panasonic GH5S.

Low light video is also impressive, thanks to the ultra-sensitive sensor. ISO goes all the way up to 204,800 in extended mode and 51,200 in normal mode. While you can expect some noticeable noise towards those limits, you’ll also get smooth-looking, usable footage in conditions in which most competitors (the Sony A7S II aside) could not function without very fast lenses.

Going for 50fps and 60fps 4K material forces you to drop 10-bit down to 8-bit, which looks more compressed and less natural, but still very sharp when viewed from a normal distance. And then you have smooth slo-mo playback at 4K and 1080p to play with too.

Simply put, the video options here are incredibly impressive, and that’s without adding any optional extras (aside from a lens, of course). You can shoot sublime video straight from the camera, in almost any circumstances. 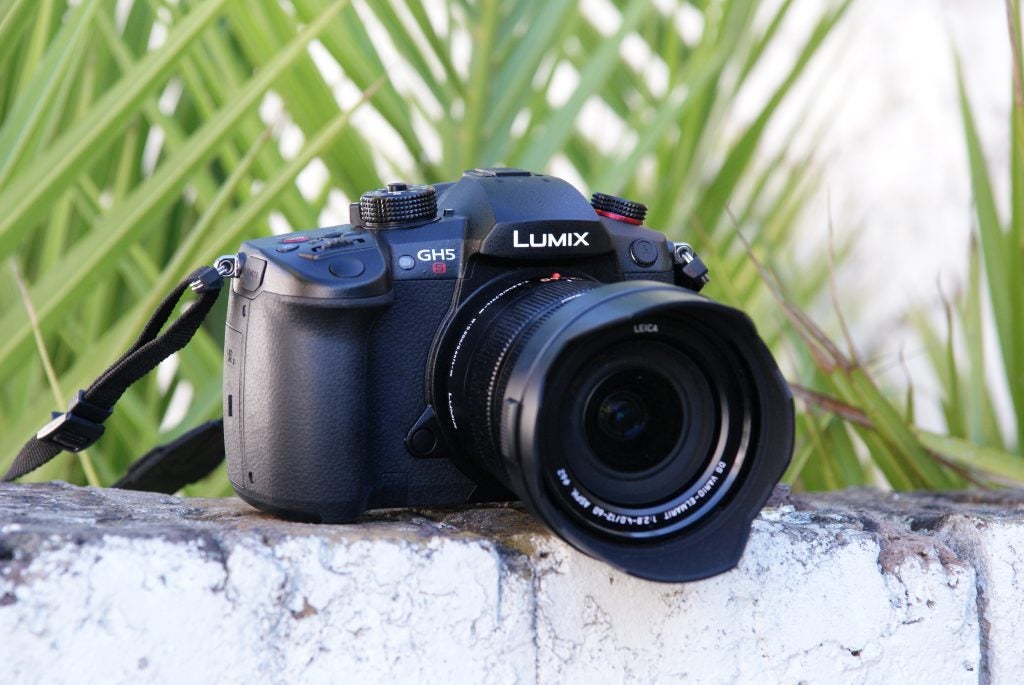 Why buy the Panasonic Lumix GH5S?

If you’re primarily a stills shooter who occasionally dabbles in video, the Panasonic GH5S is not for you – there are lots of other options that offer superior stills performance, many of them a lot more affordable than this camera.

But if video is your thing, and you want a pro-quality camera capable of shooting in all sorts of ways (most of which give you fantastic results), the GH5S fits the bill perhaps better than any other compact system camera on the market.

Sony’s newer full-frame A Series models give it a run for its money, but nothing this portable made by Canon, Nikon, Olympus or Fujifilm comes close.

A small but mightily powerful tool for videographers looking for ultimate creative flexibility.