Curved monitors are gaining ground in gaming circles, with many preferring their widescreen designs to taller and narrower 4K panels.

BenQ is the latest firm to throw its hat in the ring, and its XR3501 stands apart from the competition in several important departments. It eschews adaptive syncing features such as FreeSync and G-Sync for 144Hz operation and it makes changes to the curve itself to try to provide a more immersive gaming experience.

Watch The Refresh: This week’s tech news in video form

The BenQ’s screen is built with a curvature of 2,000R (a complete circle of these monitors would have a radius of 2000mm), which is tighter than the competition – the Samsung S34E790C sits at 3,000R, while the Asus Republic of Gamers Swift PG348Q is 3,800R. In effect, that means the BenQ’s curve is a slice of a smaller circle, which means that the panel wraps around the user to a greater degree.

That could be a boon in games and, indeed, BenQ says that it’s particularly good for racing titles. But this isn’t the only genre that benefits from a curved widescreen, though – FPS, RTS and MOBA games all look top-notch.

Although the tighter curve is a good move, it does take some getting used to. You can see the curvature of the screen on flat horizontal lines, for instance, which isn’t something that’s too visible on panels with a less pronounced shape.

That means there are more obvious pixels visible throughout – and that will impact on the fidelity of games as well as the amount of screen real-estate available for work. On the plus side, the lower resolution means that a greater number of graphics cards will run games smoothly on this panel.

The BenQ deploys an 8-bit VA screen inside the XR3501. That’s the same specification as the similarly priced Samsung, and it means that the BenQ will likely deliver fantastic contrast and black levels alongside the ability to render 16.7 million colours.

It’s a step behind the Asus, but that’s no surprise – the Asus costs around £300 more. That unit has a true 10-bit IPS panel that’s capable of producing 1.07 billion shades. 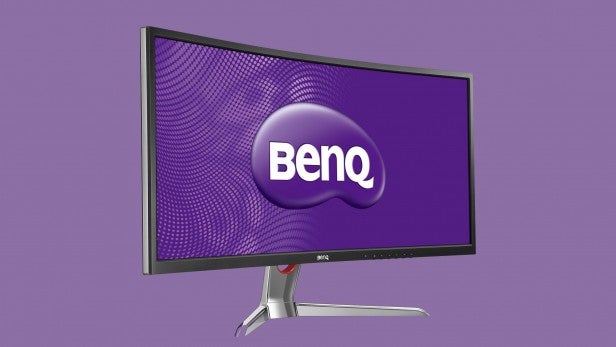 The BenQ differs from its two rivals in one big gaming department: syncing. Most gaming monitors now arrive with some sort of syncing feature, whether it’s AMD FreeSync or Nvidia G-Sync – Samsung has the former, while Asus opts for the latter. They both eliminate screen-tearing and ghosting by matching a graphics card’s frames-per-second output to the refresh rate of the monitor.

The BenQ doesn’t feature either technology, but is kitted out with a top refresh rate of 144Hz. The XR3501 won’t be able to match its GPU frame rate to the monitor’s refresh rate, but this screen’s 144Hz capabilities still bring smooth gameplay to the fore, especially when compared to conventional 60Hz panels. It isn’t too far behind G-Sync and FreeSync for butter-smooth gameplay.

One area where this screen is left wanting in comparison to rivals is USB ports; there aren’t any. It doesn’t have any speakers, either – although I’m not hugely fussed about that; monitors aren’t renowned for audio quality.

BenQ gains ground elsewhere, however. The monitor looks pretty great, with a chrome-covered stand and smart plastic elsewhere. It’s a little better than the Samsung, and not as ostentatious as the Republic of Gamers’-branded Asus. Build quality is excellent, too.

It’s packed with software features designed to boost colours and contrast, too. There are dedicated vibrancy and black equalizer sliders, and modes are included for specific gaming genres. Finally, there’s an anti-glare layer over the top of the screen: it works well, putting the brakes on any potentially pesky reflections from bright lights.

The BenQ arrived with barely any assembly required. Its 11.1kg weight matches the Asus and is only a kilogram more than the Samsung; its chrome-effect legs see the BenQ panel stretch 206mm from front to back. That’s less than both rivals, and the relatively slim legs mean that there’s a lot of room beneath the screen for storage.

BenQ has deployed a conventional navigation method for the onscreen menus, with a row of chunky, snappy buttons that correspond to icons on the front of the bezel.

Pressing any of them opens up the quick-select menu. By default they load a screen mode selector, brightness slider and a black equalizer menu, but all of these can be customised. 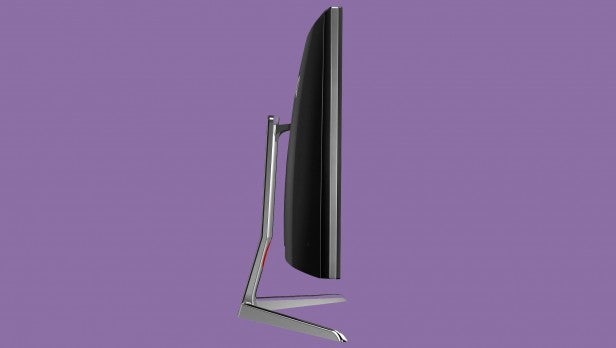 The main menu itself looks plain, but it’s well organised and quick to respond. It pairs well with the physical buttons, and large prompts function as easy reminders of arrow directions and confirmation buttons. The basic picture menu has brightness, contrast and colour temperature settings, and delving into the advanced menu serves up picture modes, vibrancy and equalizer options alongside the dynamic contrast toggle.

The BenQ is equipped with two HDMI 1.4 connectors and two DisplayPort 1.2 jacks – one of which is a mini version. All the BenQ’s ports face downwards, which means they’re tricky to reach if you’re in the habit of swapping them in and out on a regular basis.

There isn’t much versatility when this monitor is assembled – just the option to tilt the screen back and forward. That’s what I expect from bulky curved screens, though, which tend to sacrifice movement options for added stand strength. The Asus screen is more versatile, with height adjustment and side-to-side swivelling, but that hugely expensive monitor is an outlier in that regard.