The W1400 is a single-chip DLP projector that sits towards the top of BenQ’s latest home entertainment projection range. It’s full HD, supports 3D and is at the time of writing available for just a smidge over £1100, making it eye-catching affordable for its level of specification. 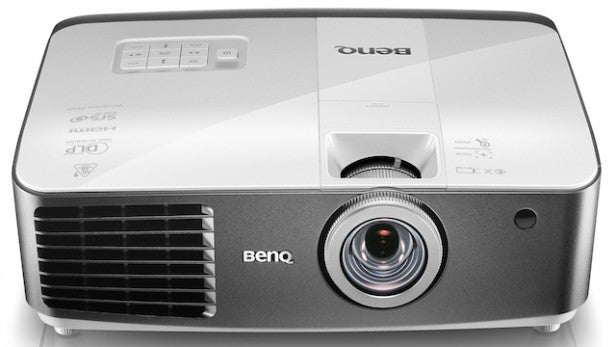 The W1400 is a touch more ‘functional’ in its design than some of BenQ’s other home entertainment projectors. Its shape is a fairly perfunctory rectangle, and while its combination of a gloss white top panel with a deep grey sides and front is reasonably striking, the rather random positioning of the lens just to the right of centre and the large fan grille that dominates the W1400’s left front side both cost it style points.

Connectivity is as we’d expect of a home entertainment projector, which is to say there are two HDMIs, a component video input, a composite video input, an S-Video input, a D-Sub PC port, and both RS-232 and 12V Trigger outputs for system integration.

The W1400’s quoted image specifications are promising. As well as a native 1080p resolution it claims a contrast ratio of 10,000:1 and a high brightness level of 2,200 Lumens.

We should point out that this brightness figure refers to a measurement taken using a full white signal rather than the ‘colour light output’ measurement approach some rival projector manufacturers – most notably Epson – are keen to promote in a bid to expose the brightness reducing side effect of the DLP colour wheel. But as ever, our judgments on the W1400 will be based purely on what we see on our screen rather than any mere numbers games.

The DLP chipset at the W1400’s heart is a DarkChip 3 system, which is widely respected for the way it minimises the ‘gaps’ between the tiny mirror devices it uses to deliver pictures. There’s a 6x RGBRGB colour wheel, and the optics are calibrated to target the Rec. 709 Colour Gamut widely used by the professional video industry.

More home cinema credentials come from its ISF Certification, meaning that it has enough picture calibration tools to be professionally calibrated to precisely suit the demands of your particular viewing room. 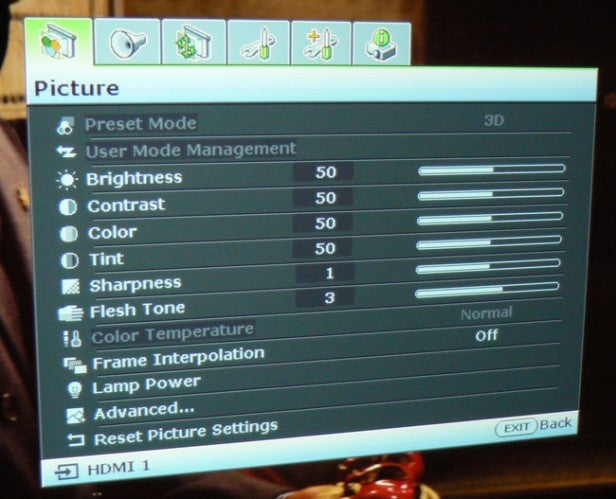 Among the calibration features available are colour management, a simple but effective multi-level flesh tone adjustment, a series of gamma presets (including the key 2.2 one), a Clarity Control system that provides an unusual amount of fine tuning of noise reduction and detail enhancement tools, and a system for fine tuning the colour temperature.

There’s also Texas Instruments’ Brilliant Colour option for boosting saturations, and a return for BenQ’s previously impressive SmartEco system for automatically adjusting the projector’s light output in response to the brightness level of the content being shown.

The most controversial feature of the W1400 is the addition of a Frame Interpolation engine to the spec of the recently reviewed BenQ W1300. As you would expect, this is designed to remove judder from images by using processing to add extra frames of picture data, but the concern is that in doing this the projector will leave pictures looking unnaturally fluid and over-processed.

Wrapping the W1400’s specifications up are a built-in 2x10W sound system for when you just can’t partner your pictures with an external speaker array, and 3D playback. This is of the active variety, and it’s good to find a pair of the necessary 3D glasses included for free.

The W1400 is unusual for its price point in offering vertical image shifting (via a wheel under a panel above the lens) to help you get pictures in the right position on your screen. The extent of this image shifting is pretty limited, but anything is better than nothing on a £1,100 projector.

Also good to find is a 1.6x optical zoom, which joins with the vertical image shift and a fairly short-throw lens in making the W1400 unusually adaptable to different room environments.

If the image shifting system doesn’t quite go far enough you can use screw down legs under all of the projector’s corners in conjunction with a keystone correction system to get your image fitting flush in your screen. However, as always we’d suggest you avoid keystone correction where possible, as it’s essentially a digital manipulation of the source image that spoils the ‘pixel for pixel’ purity we like to get when watching HD sources on full HD displays.

The menus on the W1400 are clear and reasonably logical, and the remote control is backlit and decently laid out.

Focussing next on picture set up tools, our suggestions would be as follows. First, use the Eco lamp setting while watching films in a dark room, as we found this to deliver a better black level performance than the SmartEco mode while also delivering a marked reduction in the projector’s running noise.

Second, set the noise reduction and detail enhancer elements to zero while watching HD. Third, only use the Frame Interpolation on its low setting or don’t use it at all unless you’re really noticing judder in a particular source. And finally, while the BrilliantColour setting does give images more punch and can be especially helpful if you’ve got some ambient light in your room, it can push colours into marginally unnatural territory, and also tends to exaggerate source noise.