The GP10 is an ultra-portable business projector that has more than a little promise as space-saving home film and gaming projector. It’s not quite a true ‘pocket-sized’ model like some we’ve tested, but it’s small and light enough to tuck easily into a briefcase or laptop bag. Its convenience factor is further advanced moreover by its provision of a short-throw lens system, built-in speakers, an instant on/off and ultra long life LED light engine, and a startlingly flexible array of connections. 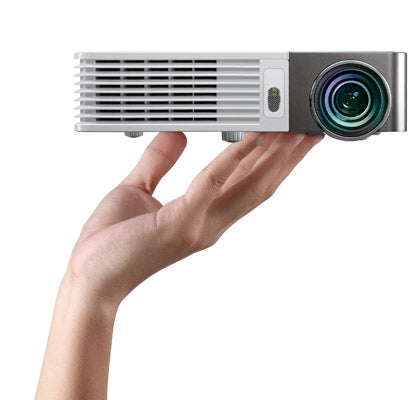 Looking at the GP10’s all-important form factor in more detail, its size is roughly equivalent to a meaty hard-back book – think something like the hard cover version of Stephen King’s The Talisman. Or if you’d rather work with cold, hard measurements than tortured comparisons, you’re talking about a width of 220mm, a depth of 177mm, and a height of 61.8mm. Oh, and a weight of just 1.5kg, which is less than your average laptop.

There’s nothing especially distinctive about the GP10’s bookish shape apart from its relative smallness, but it does boast quite a design statement in the way two thirds of it is finished in a glossy white while the other third containing the projector’s lens is finished in a deep grey.

With the USBs, you can use them for either playing back files stored on a USB storage device, or you can use one for attaching an optional Wi-Fi dongle so that you can set up an ‘untethered control’ situation by connecting your PC or iOS/Android device to the projector without needing a cable.

You’ll need BenQ’s EZ QPresenter app/software for this, which once installed on your source equipment can parse PDFs, MS Office and iWorks document formats. 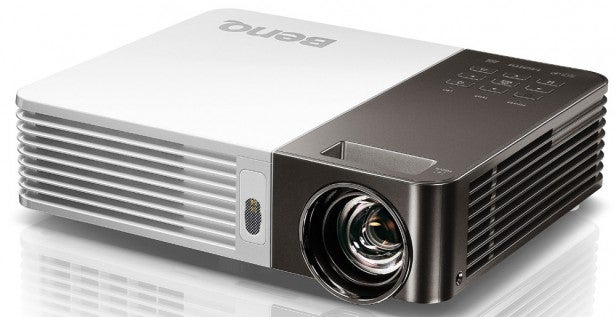 Having tested countless ultra-portable/pocket projectors where getting your sources connected can be a nightmare of weird adaptors and configuration headaches, the ease with which you can get almost anything showing on the GP10 is a breath of fresh air.

In some territories you even have the option of fastening the projector onto the top of an optional DVD player section. We weren’t sent this for our tests as it’s currently not planned for a European release, but we can confirm that if you’re in a part of the world where they are sold, the DVD deck slots underneath the projector without adding significantly to its width.

We can’t really see many business people taking advantage of this optional DVD add-on in these HD times, but it could certainly give the projector added appeal as a dual business/domestic unit that can be turned into a bedroom movie machine when not being used in the office.

The GP10’s claimed specifications are very promising. Particularly eye-catching is a claimed brightness output of 550 lumens, which is substantially higher than the figures associated with most self-consciously small projectors. This suggests the GP10 might actually be bright enough to deliver a picture you can still see in a relatively bright room environment – an especially important consideration for a business user.

Having more brightness at its disposal should also aid the GP10 in producing a larger image than you can get from many portable projectors. Indeed, BenQ claims a range of 40 inches right up to 240 inches. Personally we’d suggest you wouldn’t want to go much larger than 70-80 inches if you really want images to contain lots of punch, but this is a lot bigger than you would normally comfortably be able to go with such a diminutive projector.

Although the GP10’s high claimed brightness levels will probably prove especially useful for business, it’s worth adding that a potent lighting system may also help the GP10 produce the sort of contrast performance you need for a decent movie performance.

Backing this hope up is a claimed contrast ratio of 10000:1 which, if not wildly optimistic, humbles the contrast figures of many much more supposedly home cinema-oriented projectors at the GP10’s sort of sub-£500 price level. 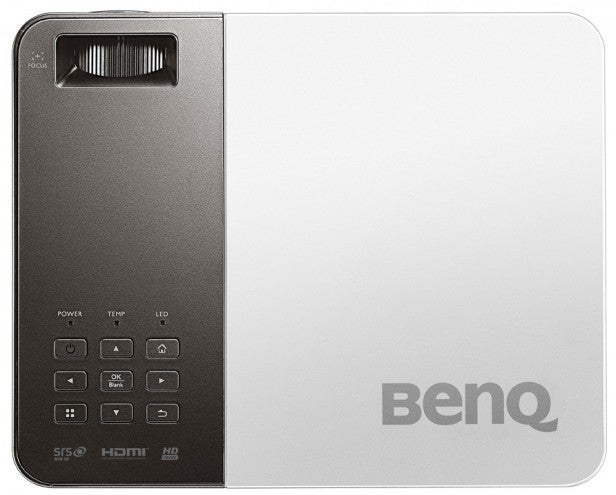 Also ticking the right boxes in the GP10’s feature list are its use of an LED lighting system expected to deliver a huge 20,000-30,000 life span, and the squeezing into its diminutive frame of two 3W speakers, so that you can play movies or presentations with audio tracks without having to worry about finding external speakers.

This needn’t be a big deal for PC users, we guess, but it does mean that if you watch normal HD video sources on the GP10 you have to accept them appearing within a slight outer grey ‘box’ of pixels the picture isn’t using. As we’ll see, though, the GP10’s contrast performance is good enough that this ‘boxing’ issue is not in reality as distracting as it sounds on paper.

The process of getting the GP10’s picture up on our screen didn’t get off to the smoothest of starts as it turned out BenQ hadn’t shipped a remote control with our test unit – even though one should be included in the package. Just as well that the panel of buttons on the projector’s top are large and tactile, and that we didn’t find ourselves having to return to them all that often during our tests.

Getting the picture to the size you want is rather basic – as in, you just have to move the projector away from your screen/wall until you’ve got to the required size! There’s no optical zoom. There’s a slightly fiddly focus ring, though, of course, accessed through a hole in the projector’s top panel.

There’s no vertical image shifting on the GP10, which is only to be expected at its price point. But it does have a decently clever autokeystone adjustment and a fair keystone adjustment range, so it’s not hard to get the image’s sides straight. Though of course, we’re duty bound to point out that a picture adjusted by keystone methods is essentially being distorted digitally, which could impact its clarity.

One last interesting aspect of the GP10’s setup features is its list of picture presets. For these include a Cinema mode, clearly showing that BenQ doesn’t just expect its new portable model to be used for business.