Regular readers will know that we’re certainly not always fans of the picture quality of ultra-portable projectors. But the GP10 pretty much instantly overcame our initial doubts.

The single most important point about its pictures is that they really are bright. That 550 Lumens claims seems to be no exaggeration at all, as pictures manage to still look bright and vibrantly coloured even when pushed to 70 inches across in a room with the majority of its downfiring spotlights still turned on.

For the best brightness you should obviously try and use a proper projection screen if you can. But another great benefit of the GP10’s exceptional brightness is that you can use it on a white wall and still get a watchably dynamic result. There’s even an option to adapt the projector’s picture characteristics to suit different wall colours, but we’d strongly advise sticking with white if you can. 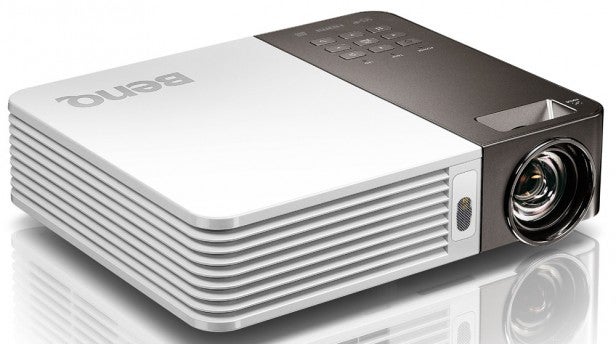 Another unexpected strength of the GP10’s HD pictures is their sharpness. Despite the projector not having a full HD or even true 16:9 aspect ratio, Blu-ray images and text-filled PC signals alike both look impressively detailed, crisp and clean for the most part, with only the occasional bit of shimmering noise over areas of very small detail detracting from the clarity. This is an excellent result for a projector of the GP10’s type.

Also fairly impressive is its ability to adapt its colour palette/temperature to suit either PC feeds or video feeds. Often with very affordable and/or very small projectors the available colour palette is only really suited to PC sources, but the GP10’s Cinema preset really does have a game stab at shifting the projector’s palette towards something best suited to movies.

Also surprising is the degree of colour subtlety the GP10 can render, even during dark scenes. This is an increasingly promising trait of the latest generation of affordable LED-lit projectors.

It’s also nice to see that the LED optical system doesn’t generate overt signs of pixel structure unless you try to blow pictures way beyond where they’re comfortable to go in size terms, and motion is handled surprisingly well, with minimal blur or judder, and none of the fizzing noise you might get with, say, a budget DLP colour wheel projector.

The only sign of a PC bias in the GP10 is that while its PC and Game picture presets need little to no tweaking to look the part, the Cinema mode does need a little TLC to look its best. The problem is that presumably in its bid to absolutely nail the picture’s colour temperature, the image lacks quite a lot of brightness and contrast, leaving it looking rather flat and grey. Personally we nudged the brightness up a bit from the Cinema default – even when watching in a completely dark room – for movie viewing.

Only one picture trait stops the GP10 from being a runaway success for its level and part of the market, and that’s its black level response. For no matter what settings we tried, dark scenes perpetually appear as if behind a greenish mist, really taking the edge of the projector’s black level response, reducing the credibility of dark colours, and hiding enough shadow detailing to leave dark scenes looking a flat and hollow.

To be fair, this problem is startlingly less obvious if you’re using the projector in a room with some ambient light in it, but it’s a shame the GP10 doesn’t quite have the flexibility in its light engine to adapt as well as we’d like for true dark room viewing.