Surprisingly the GP10 supports 3D playback. Less surprisingly it doesn’t come with any 3D glasses included, and we weren’t supplied with any for the review. It’s also important to stress that the extent of its 3D support is severely limited; it will only play 120Hz Frame sequential 3D on a PC for resolutions up WXGA; 60Hz top-bottom 3D for resolutions up to SXGA ; and 60Hz Frame Sequential video 3D for resolutions up to 480i. This latter fact means, of course, that it won’t play HD 3D Blu-rays; indeed, our Blu-ray player wouldn’t even recognise the projector as being 3D capable.

It seems strange to be talking about sound quality on a projector. After all, having the audio for the large images you’re watching coming from small speakers set some distance away from the images they’re supposed to be accompanying is never going to make a particularly satisfying audio performance. 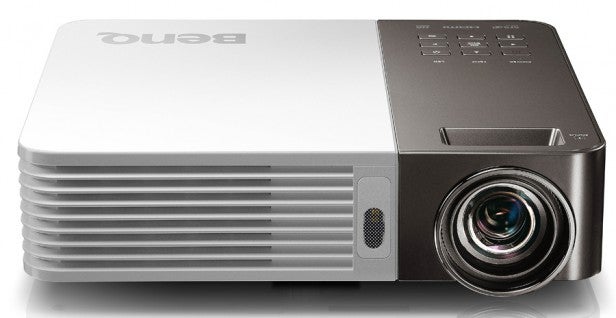 However, aside from that inevitable limitation the GP10’s audio actually isn’t bad. The speakers are more powerful, clean and open sounding than those we’ve heard from some much bigger and more expensive ‘casual’ projectors, and so actually support the pictures with a soundstage that’s at least tolerable – especially if you’re just looking at some music and narration on a business presentation, or maybe a sporting occasion.

The biggest catch with the sound quality is actually that during quieter moments you can very clearly hear the fairly frenetic high hum of the GP10’s cooling fans.

The GP10 ships with a decent quality if oddly slightly oversized carry case, underlining how easy it is to cart about.

It’s also worth noting that while the 20,000-30,000 hour claimed lamp life for the GP10 is huge (other types of projector tend to top out at around 4000 hours before they need to have their bulbs changed), once the GP10’s illumination dies, it pretty much means the projector is dead period.

If you’re looking for an ultra-portable projector with enough brightness to function in both reasonably bright board rooms and gently lit living rooms, the GP10 definitely warrants at least an audition. The rich colours and high luminance levels it pumps out are rare indeed from such a portable model, and the flexibility of its connections is outstanding.

Overall we’d say the GP10 leans more towards business than domestic use on account of its difficulties generating a convincing black colour. But that’s fair enough so long as you’re after a portable projector for business use first and home use a fairly distant second.

There’s much to admire in the sharpness, brightness and colour response BenQ has managed to get out of such an affordable and small projector as the GP10. Ultimately, though, it’s not quite good enough with its contrast to earn a Recommended badge.