What are the Audio-Technica ATH-MSR7NC?

The Audio-Technica ATH-MSR7NC are noise-cancelling headphones, the airplane-ready version of the classic MSR7 pair we reviewed last year.

This new version keeps the same sound quality, but the noise-cancellation quality isn’t going to challenge the Bose QuietComfort 25 or the Sony MDR-100ABN I tested recently. It’s a disappointing release in some respects, then, but a solid base of good sound and comfort sees the pair through at £249.

The Audio-Technica ATH-MSR7NC are full-size headphones. Audio-Technica makes some great headphones of this type, the ATH-M50X and original ATH-MSR7 being some of the best you can get at their respective prices.

The ear cups are aluminium, the headband steel and the padding leather-covered. Plenty of the other details are plastic and all the leather is quite clearly synthetic, but this is the norm for a pair of headphones at this price with extra tech packed in. 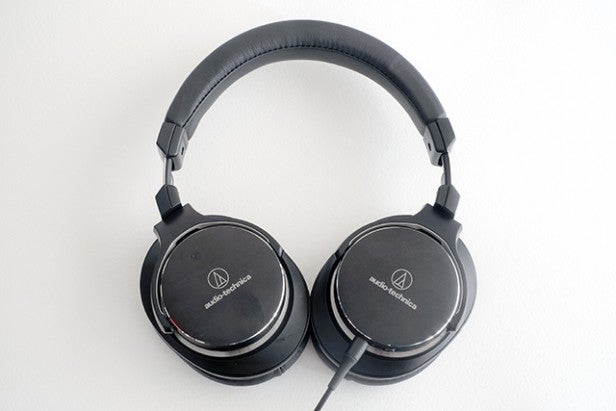 Aside from active noise cancellation the Audio-Technica ATH-MSR7NC are extremely similar to the MSR7, which cost £179 (a difference of £70).

Thick padding and cups large enough to suit most ears make these headphones very comfortable. I’ve worn them for 4-5 hours at a time with no discomfort. The Bose QuietComfort QC25’s ultra-optimised headband is even comfier, but then few headphones compare to Bose on that front. 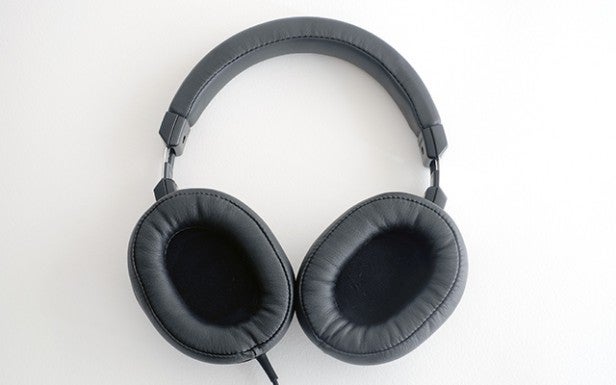 Typical of Audio-Technica’s pragmatic style, the ATH-MSR7NC have a removable cable, and it ends in a standard 3.5mm jack. You get a couple of cables in the box, one with an Android/iOS-friendly single-button remote and another without.

A carry case, charge cable and an airplane converter are also included – not that most planes I’ve travelled in recently seem to need such a converter. 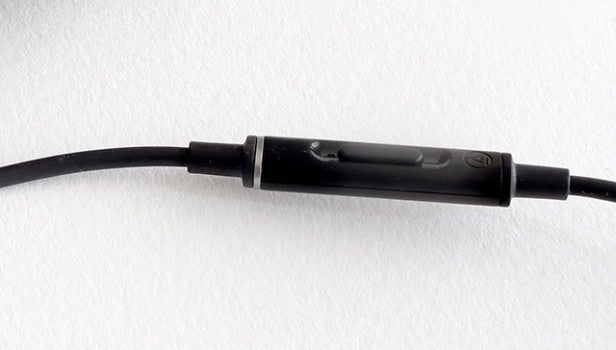 Now for the main event: the Audio-Technica ATH-MSR7NC’s active noise cancellation. Its execution is as matter-of-fact as they come. There’s an exposed Micro USB charging socket on the left cup to charge the built-in battery, next to which is an on-off switch.

The best part of the ANC is battery life. Audio-Technica says it’ll last for up to 30 hours between charges, and the number of times I’ve left the set on only to see its little blue LED indicator still lit up the next day supports that.

Sound is also very similar whether ANC is used or not, meaning you don’t feel like you’re missing out if the battery dies (well, unless you’re in a noisy environment). 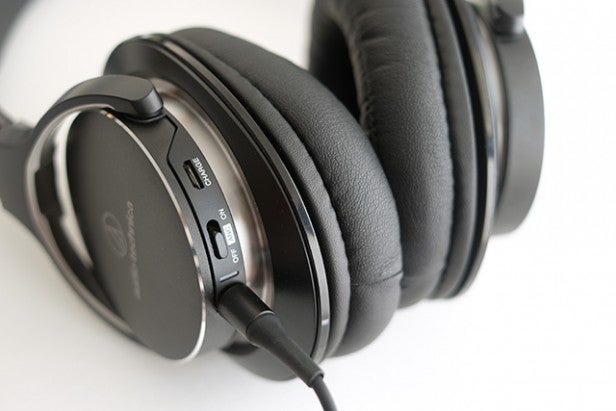 I am ultimately a little disappointed by the cancellation, though. It’s nowhere near as effective as the ANC on the Bose QC25 or the Sony MDR-100ABN.

In a lucky convergence of events, I was able to take the Audio-Technica ATH-MSR7NC on a flight to Turkey during testing. While they significantly reduce the engine noise of a plane, they don’t give you that sense of being in a near-silent world that the best ANC headphones can provide.

The question: is light active noise cancellation enough when you’re paying £70 for it? That these headphones have scored less well than the ‘vanilla’ MSR7 tells you my feeling. It doesn’t mean their ANC is useless, though. While I don’t find you get the stress-eradicating effect of some rivals, the reduction of low-frequency noise is still substantial, and helps these headphones cope with noisy environments much better than they otherwise would. These headphones don’t have the bass cushion most streetwear headphones use, which can help the sound deal with noisier environments.

Just don’t expect them to kill noise altogether. One side benefit of this light-touch approach is that there’s almost none of the sound pressure discomfort some ANC headphones (including the Bose QC25) create. 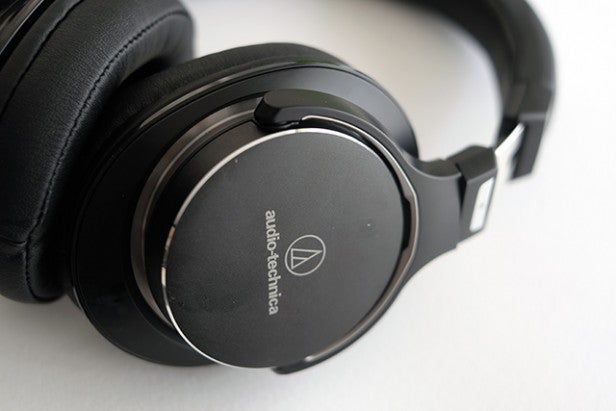 What redeems the Audio-Technica ATH-MSR7NC despite the unremarkable ANC is sound quality. Just like the MSR7, these are great-sounding headphones, and undoubtedly among the better-sounding noise-cancelling headphones you can buy.

With a more grown-up sound than the classic ‘DJ’ ATH-M50 and M50x pairs, these headphones lack the big bass boost some have come to expect, but as a result they make for a much more satisfying close listen.

They are clear and wide-sounding, without any of the hard-sounding upper-mids that I find grating in the cheaper ATH-SR5. Matching scale with a sparky treble, they’re fun and involving even without the very obvious bass boost some rivals have. Stereo imaging is great too, and while you might initially find the bass a little light if you currently own bass-heavy headphones (and odds are you probably do), bass tonality and punch are still very good. 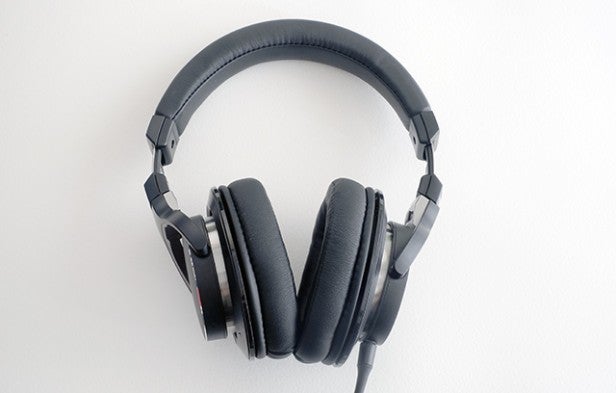 Comparing the Audio-Technica ATH-MSR7NC to the Bose QC25, these headphones have a much less slick and glossy style, but as such end up with a more intricate sound that should please picky ears more.

It’s when I made an A/B comparison between the ATH-MSR7NC and the Sennheiser Momentum 2.0 that I started to hear what you could get from some of the best non-ANC headphones at the price. The Audio-Technica ATH-MSR7NC’s mid-range detail is not consistent. A lot of what goes into making the texture we hear in vocals through these headphones comes from the upper-mid frequencies, where the Momentum pair has more meat slap-bang in the middle of the mid-range. 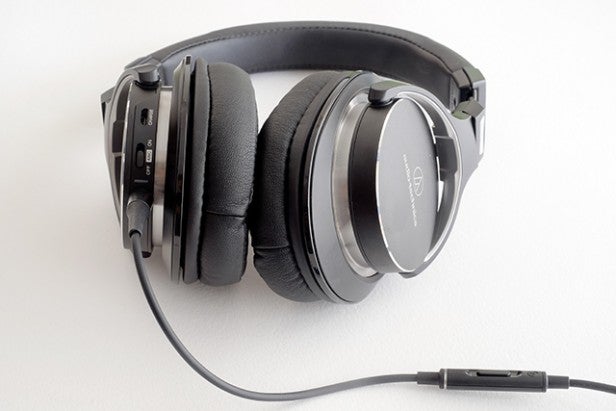 This is what leads to the Audio-Technica ATH-MSR7NC’s slight granularity. I don’t find them a harsh or fatiguing listen, but they’re not velvety smooth either. This is a choice as well as a slight failing of the mids too, though. The Audio-Technicas also have much more obvious treble clarity than the darker-sounding Sennheiser Momentum 2.0.

The comparison isn’t entirely fair when the Sennheisers don’t have ANC (meaning less of their budget goes on tech), but it’s worth thinking about when you shouldn’t buy the AR7NC largely (or at least solely) on the merits of their cancellation. 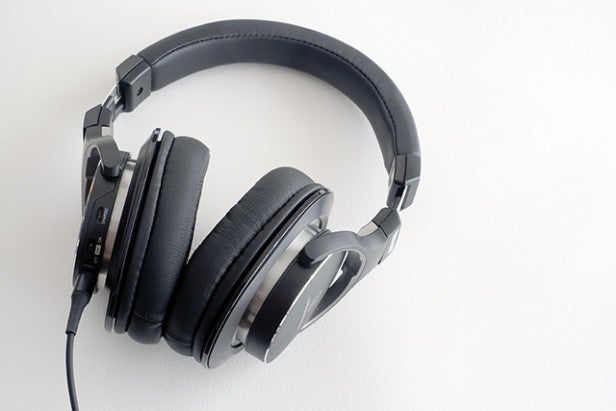 Should you buy the Audio-Technica ATH-MSR7NC?

If you want headphones because you hate the roar of tube trains, or seem to spend half your life on planes and want to be able to relax that bit more during flights, the Audio-Technica ATH-MSR7NC shouldn’t be at the top of your list. The Bose QC25 and Sony MDR-100ABN both offer significantly better active noise cancelling.

These headphones take the edge off noise, but don’t decimate it as you might hope.

They do offer very good sound quality, though, especially if you like your sound clear and well defined rather than with big brash bass attached to its bottom-end. We’re in an awkward middle ground here, though. It’s a little hard to justify the £70 bump over the original MSR7 when that presents almost 50% of the cost of the standard version.

The same sound quality and comfort we loved in the original MSR7, but the ANC could be better.