What are the Audio-Technica ATH-MSR7?

The Audio-Technica ATH-MSR7 are serious headphones designed primarily for portable use. While they’re positioned as being the perfect accompaniment for Hi-Res Audio files, we think they’re something even better.

Audio-Technica has taken the audio brilliance of the ATH-M50X, improved it and made the design stylish enough to go head-to-head with pairs like the Beats Studio and Sony MDR-1A.

There are a few little giveaways that Audio-Technica isn’t quite a style guru, but they’ve set new audio standards for a ‘style’ headphone, along with providing sound that’s good enough for for real enthusiasts to use at home. £200 isn’t pocket money for a set of headphones, but these should keep many of you satisfied for years. 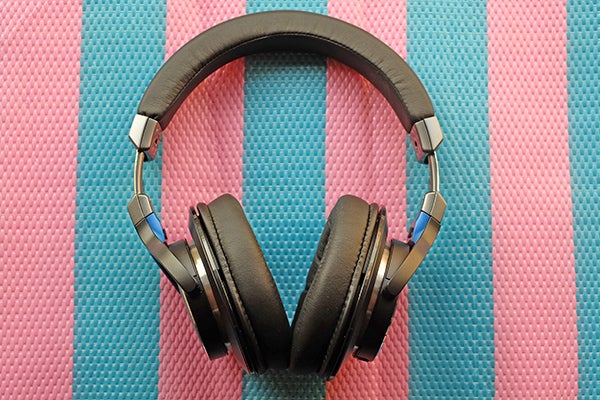 Our headphones of 2014 were the Audio-Technica ATH-M50X. We loved them, and still do. However, they look and feel like what they are: a DJ/studio headphone modified for the consumer audience.

The Audio-Technica ATH-MSR7 are much more clearly high street bound from the start. Their headband is narrower, the cups a little less vulgar, and the shape of them pretty similar to Sony’s top style headphones.

Industrial design inflections have been replaced by ones a little more subtle. However, Audio-Technica hasn’t scaled all the way up to a Bowers & Wilkins P7-grade construction. The Audio-Technica ATH-MSR7 are mostly-plastic, but the outermost parts of the cups are coated with aluminium to give them a higher-end feel. 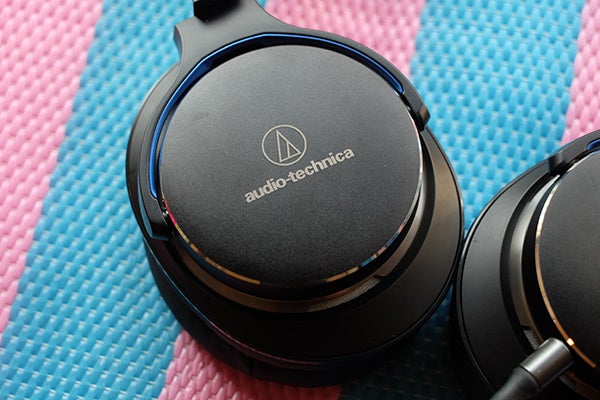 It is likely all to do with feel, but it does make the Audio-Technica ATH-MSR7 seem a bit, well, nicer than the cheaper ATH-M50X. We only wish the ear cups weren’t labelled ‘left’ and ‘right’ in a font that’d look more at home on a pair bought from the local market than a set costing £200.

On first putting on the headphones, the headband feels a touch hard but for longer-term listening these are very comfortable. The pads on the ear cups and headband use memory foam, which shapes itself to your head a little more intelligently than standard foam. After a while the distribution of pressure is very even, which is why that hard feeling disappears after a while. 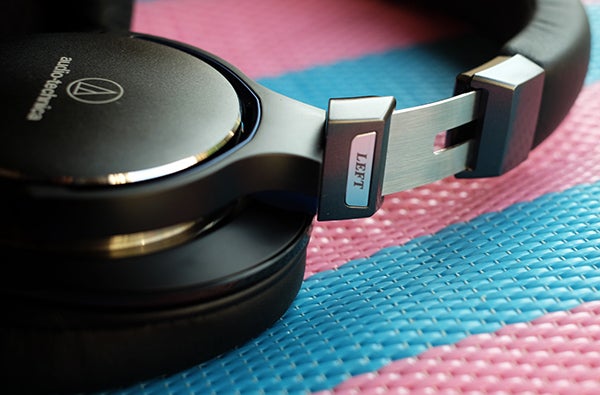 Large ear pads, good foam and mid-level headband firmness make the Audio-Technica ATH-MSR7 feel as though they’re hugging your head. It’s firm enough to run with, but not tight enough to cause any discomfort. Spot on.

We did, however, notice a bit of creak to the plastics of the headband when walking about with the band at certain positions. For all Audio-Technica’s efforts, the construction isn’t quite as good as the similar Sony MDR-1A. 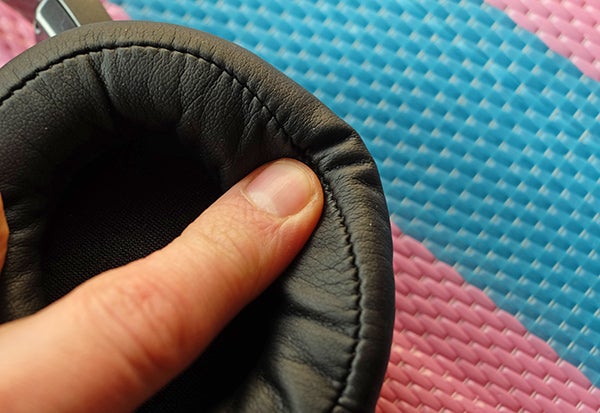 Noise isolation seems to be marginally better than that of the ATH-M50x, offering enough isolation for public transport, if not anything approach what’s on offer in something like the active noise cancelling Bose QC25. The cups are ported with little grilles on the underside that let air move between the driver and the outside world, and there’s no tech wizardry going on here. No wireless, no noise cancellation and no integrated headphone amp nonsense.

Despite being a smaller than the last full-size Audio-Technica heapdhones we reviewed, the MSR7 do not fold up in the manner of some others. The cups turn 90 degrees to make them take up less room, but that’s it.

These are definitely portable headphones though – it says as much on the packaging. There’s a carry case in the box, and dual cables for home and portable use. 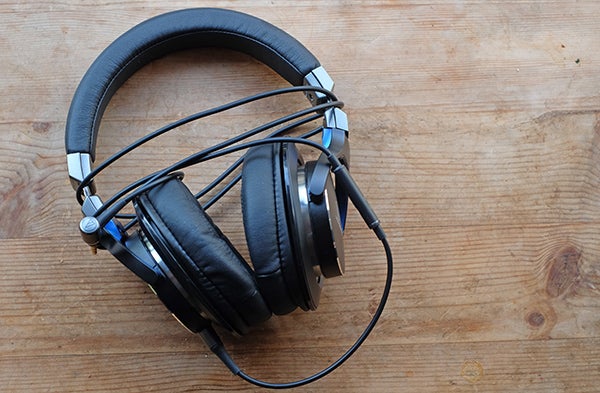 One cable is 1.2m long and features a one-button remote that’ll work with Android phones and iPhones alike. The other is a plain 3m cable that’ll be easier to plug into a TV or AV receiver. Both cables end in 3.5mm jacks at each end, and with no locking or proprietary mechanism on the headphone end you can use any old cable – 10m ones are available on eBay for just a few quid if that’s what you’ll need.

The hardware design of the Audio-Technica ATH-MSR7 doesn’t stand out, and a couple of the tiny details look a little awkward. But by Audio-Technica standards they’re pretty. 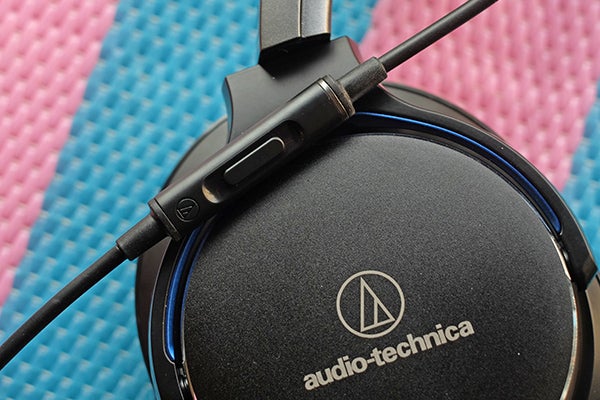 Onto the stuff that really matters: the Audio-Technica ATH-MSR7 are among the best headphones in their class at this point for sound quality. By that we’re talking about portable, closed headphones with at least a hint of self-conscious style to their design.

The Audio-Technica ATH-MSR7 offer accuracy with just enough bass emphasis to make them fun. Having such a measured approach to ear candy and accuracy is rare, especially in headphones you wouldn’t be embarrassed to wear out and about. 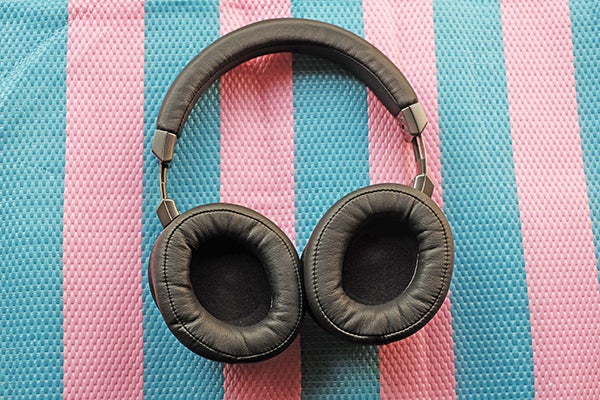 What they offer in a portable headphone for £200 is so far beyond what the high-street brands provide it makes us wish headphone auditions on the high street were’t so rare.

The Audio-Technica ATH-MSR7’s bass response is just a shade above is entirely neutral, but the balance is simply superbly natural. Granted, they don’t offer the same sub-bass thrills you’ll get from the Sennheiser Momentum, but otherwise the balance is as good, if not better.

The low-end is very well-controlled and punchy, with a bit more precision and even less evidence of the mid-range being sidelined in favour of the treble and bass.

Most headphones not designed for hi-fi geeks have a slightly V-shaped sound, where there are pronounced peaks in the bass and treble. This sort of signature is great for easy thrills, but does not offer the most even, accurate sound. 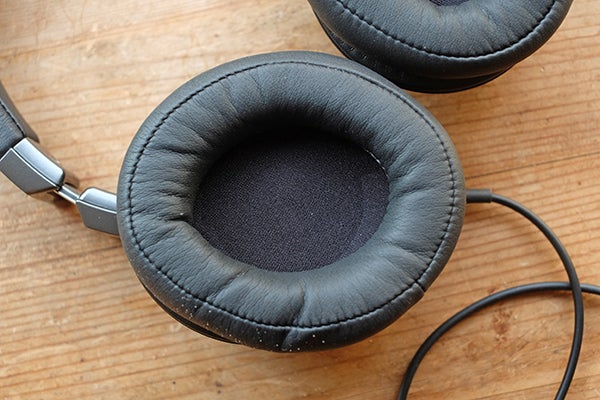 Listening to the Audio-Technica ATH-MSR7 next to the ATH-M50X and Sony MDR-1A, this set has much less of a V-shaped sound than these pairs. Bass is more reserved, treble is slightly smoother and the mids are given more presence, giving the impression of a flatter frequency response.

Sounding ‘flat’ may seem like a negative, but in this case it actually just means the MSR7 really have nailed the hifi-sounding style they were after. These headphones have the dynamic range to ensure that they don’t sound boring too.

They are great. Anything wrong? What they lack a little is the upper-mid range smoothness of the B&W P5 series II, reviewed recently. If you want real smoothed-off sweet warmth that gives vocals that ‘pretty’ sound, you may need to spend the extra money on a Bowers & Wilkins pair. Of course, the B&W alternative to these are the Bowers & Wilkins P7, which cost £130 more.

Our only other complaint is that the soundstage is a shade narrower than the recently reviewed Sony MDR-1A, not to mention the many open-back headphones at the price. These include the Sennheiser HD598 and AKG Q701 – the latter in particular are far better for detail and intricacy, but you really wouldn’t want to take them out of the house. Open-back headphones are useless for listening outside the home. 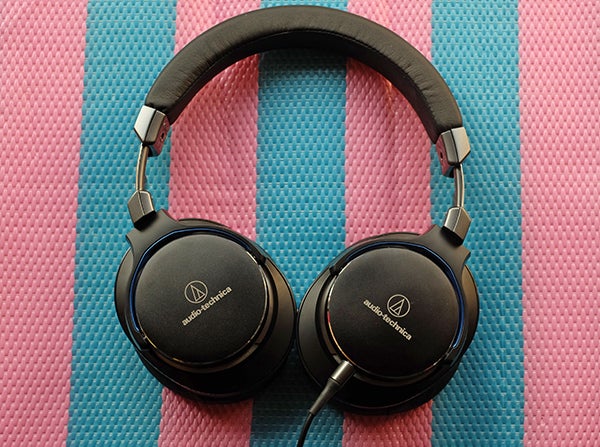 Throughout this review we’ve made several comparisons between the MSR7 and M50X. The latter are significantly cheaper, and were our favourite pair of 2014 all-round.

Are they worth the £50-plus extra? Possibly, it depends on what you’re after. The new model uses memory foam pads instead of more conventional foam, and we did find it more comfortable for long listening sessions.

The sound is also better too, although we wouldn’t be surprised if they both share the same core driver design – the MSR7 predictably claim to have an exclusive new driver. The bass has been tamed further, the treble is smoothed out further to reduce any slight harshness issues: the M50X has quite zingy treble that’s not for everyone. 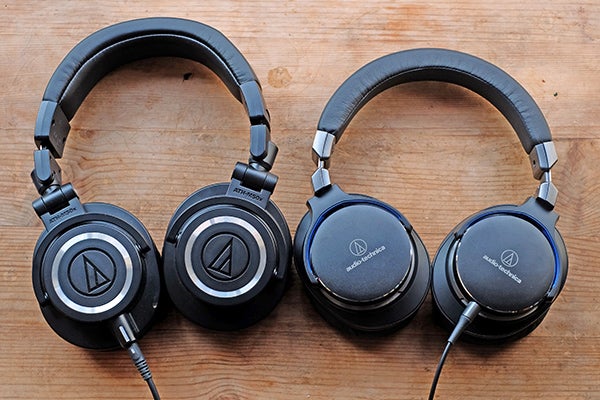 Audio-Technica’s ATH-MSR7 sound significantly more natural, especially in the make-up of vocals. Where there can appear to be a separate treble register within a vocal in the M50X, the more careful treble of the MSR7 brings greater cohesion.

As a result, the MSR7 also sound a bit less aggressive, a bit less peppy. They are also less efficient, requiring a bit more volume at the source. The ATH-MSR7 are the grown-up ATH-M50X, and if you want a headphone to wear every day for the commute, we’d recommend them.

However, there’s still plenty of life in the M50X if you like your headphones with plenty of bite. Their chunky design also feels like it can take a bit more abuse than the MSR7, although this may be a red herring. 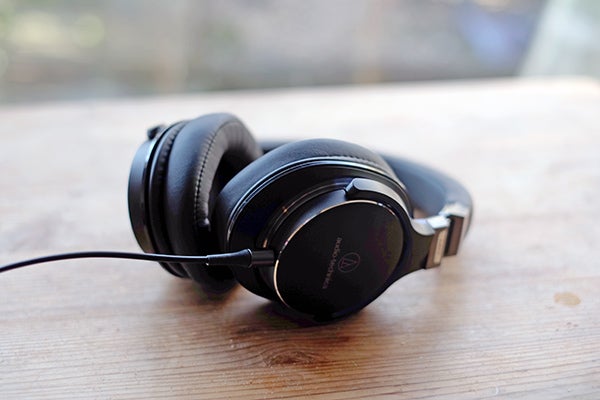 Should I buy the Audio-Technica ATH-MSR7?

The Audio-Technica ATH-MSR7 are among the best headphones ever released for under £200. While the claims of being all about Hi-Res Audio are largely marketing speak, they get you pure sound quality that quite simply outdoes what you get from the bigger names.

Like encouraging people to try restaurant food instead of Pop Tarts, the Audio-Technica ATH-MSR7 prove that higher-end headphones are worthwhile. At the price there are simply no headphones that trump this set unless you’re willing to go open-back. The Sony MDR-1A are close, but the ATH-MSR7 simple have a more balanced ‘hi-fi’ sound.

Willing to pay a bit more? The Sennheiser Momentum bring more low-bass thrills and the Bowers & Wilkins P7 get you a smoother-sounding mid-range. But unless you really want the prestige of a big name and fancy design, there’s little need to. Each of these sets has their sonic benefits.

For us an obvious draw comes from the Audio-Technica ATH-M50X. They’re more brash in both design and sound, but get you a somewhat comparable signature for around 30% less cash.

The perfect harmony of comfort, sound quality and road-friendly design makes the MSR7 a top choice for demanding audio fans.