What are the Audio-Technica ATH-SR5?

The Audio-Technica SR5 are among the cheaper headphones you’ll find stamped with the Hi-Res Audio logo (on the box only). They cost £99 for the standard set, or £150 with Bluetooth for ATH-SR5BT.

This makes almost all the big-name rivals look over-priced. The Bluetooth version here is cheaper than the non-wireless version of the same sort of headphone from Beats or Sennheiser.

Their look and design are all spot-on, but while there are several strong characteristics to the sound, the hard-edged mids make the Audio-Technica ATH-SR5 a bit of a tiring listen. 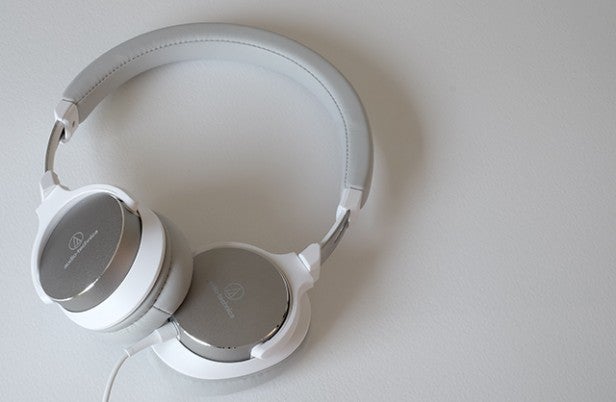 The ATH-SR5 have a classic on-ear headphone design. They have small cups, and lines that are going to look good out on the street.

Black and white versions are available, and the white version actually has a tri-tone look. The earcups have a textured aluminium finish – it’s the real stuff, not a plastic impersonation – while the frame is white, and the padding off-white. I prefer the black version, but plenty of people are tired of boring-looking black headphones at this point.

These headphones are intelligently designed from a more practical perspective too. The headband’s steel spine is springy and there’s plenty of motion to the cups’ hinges. Unlike the Jays u-Jays I reviewed recently, the Audio-Technica ATH-SR5  seem to automatically find a perfect seating on your ears. They also spread their headband pressure very evenly across your ears.

All the padding is fake leather on top of foam, but the pads are comfortable. 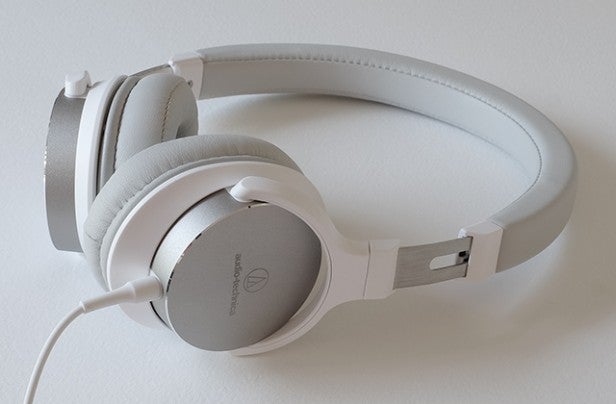 It’s intensely difficult to make on-ear headphones that are both comfortable and stay on your head, but what Audio-Technica has made here for under £100 is pretty impressive. They cause some discomfort for glasses-wearers after a few hours, but most on-ear sets do.

Small parts of the finish could be better, like how the anodised-style surface of the cups looks a lot cheaper than what Apple might use. But remember: a lot of headphones at this price are mostly-plastic.

The Audio-Technica ATH-SR5 have a very practical removable 3.5mm headphone cable with an also-sensible one-button remote housing. Using a single button is the easiest way to make a headphone remote work with all the main smartphone platforms. With the Samsung Galaxy J3 I’m using to test the remote, I can control track playback but not volume. This will be the case across iOS and Android devices.

Like the Sennheiser Momentum On-ear, the ATH-SR5 sound isolation is not great. I’ve used them on trains without issue, but if your commute to work involves very noisy transport like the London Underground, you might want to consider something with better isolation. The Beats Solo 2 block out more sound, for example. 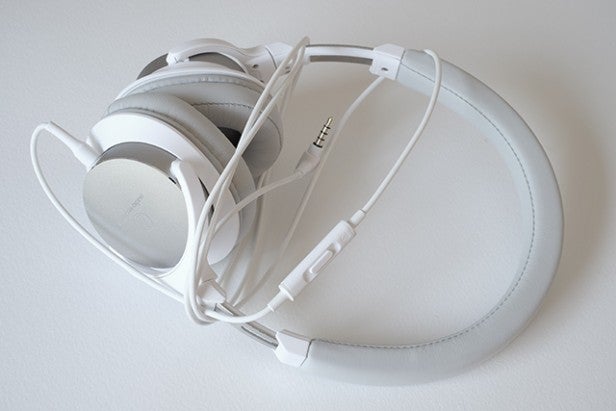 The Audio-Technica ATH-SR5 are simple headphones made for the budget-conscious buyer who still wants something a bit higher-end than a £20-30 pair. Audio-Technica also makes a Bluetooth version for an extra £50, the ATH-SR5BT.

This pair is pretty feature-packed. They support aptX, which offers higher-quality audio streams than standard Bluetooth, and they have NFC. This lets you pair up the phone and headphones without any faffing about in menus if your phone also supports NFC.

There’s no active noise cancellation, which is occasionally bunged-into wireless headphones to make them even more commuter-friendly, but this means the battery life is pretty amazing. Audio-Technica says the SR5BT will last up to 38 hours off a charge. As I’ve been using both wired and wireless sets, one charge has seen me through testing. The battery is a Li-Ion rechargeable cell, with a Micro USB port on one side used for charging. 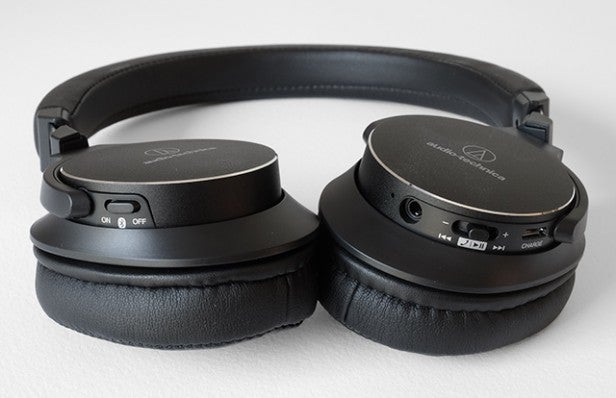 Instead of using an in-line remote, the Bluetooth version has controls on the underside of the cups. There’s a little switch that flicks back and forth and can be depressed, letting it control volume and track playback with the one mini joystick.

I found the Bluetooth performance to be very good when used with the Samsung Galaxy J3, which is like a much cheaper Galaxy S7. There was only the occasional glitch, which seems to happen when there’s something in your pocket that might interfere with the signal. Sound quality seems much the same as the non-Bluetooth version too, and a mic built into the cups lets you take calls.

We only get to see some of Audio-Technica’s products in the west. Head over to a hi-fi-nut den like the Head-fi forums and you’ll get to read about how the company releases all sorts of stuff elsewhere. However, its recent UK-released output points towards quite a distinct house sound.

Audio-Technica likes definition. The bass level varies between sets, but none of the £100-300 pairs I’ve tried over the past couple of years has had a hint of stodginess to it. 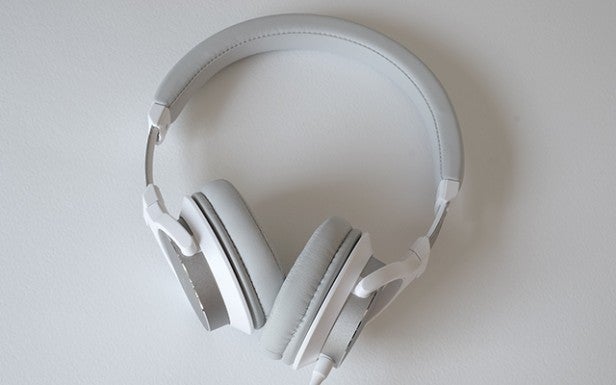 The Audio-Technica ATH-SR5 have this definition in treble and mids, while the bass is very impressive for a small headphone. It’s very deep and has real punch in the lowest registers while sounding totally balanced. The reserve is unexpected and unusual in a somewhat affordable street headphone. This pair has better bass control than the Sennheiser Momentum On-ear, although also has lesser bass volume.

It’s no wonder they offer punch without bloat when these headphones use 45mm drivers – pretty large for such a petite set.

If you were to look at the ATH-SR5 sound as a frequency graph, it’d probably look grand. However, there is an issue.

These headphones’ upper-mids are quite hard. What this means is that when a singer starts really going for it, their voice will take on a caustic edge that is quite hard on the ears. There’s also a synthetic edge to the tone of the mid-range that stops them from being quite as involving as a headphone that might otherwise have a less balanced sound.

The ATH-SR5 are clean and clear-sounding, but also a little cold. 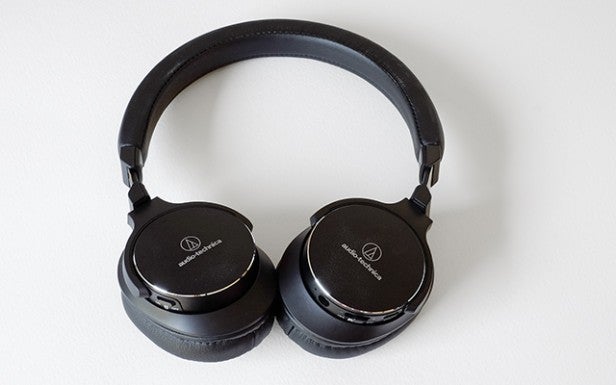 Should I buy the Audio-Technica ATH-SR5?

The Audio-Technica ATH-SR5 deserve to sell well on the merits of their good price and smart design. Take in their design and build and you could easily believe these headphones cost £170, particularly the black version. Looks smart, doesn’t it?

However, parts of the ATH-SR5 sound are a bit stiff and hard, leading to a sound that, while nicely balanced, won’t be to all tastes. If you don’t care too much about the size of your headphones, the ATH-M50x are more fun. They get rid of that hard sensibility, and have a lot more bass. They’re less balanced as a result, but some of you will like the extra energy, and the price is only a smidge higher at around £120.

If a small headphone is what you’re after the more expensive Sennheiser Momentum On-ear have an easier-to-appreciate sound.

The design is great and the sound balanced, but the Audio-Technica ATH-SR5 can be a bit hard on your ears.