Here’s a ridiculous question for you: How do you fancy being trapped in an arena surrounded by the living dead? No? What about if we blinded you so all you had to go on to secure your safety was your hearing? Sound any more appealing?

That’s the proposition behind Audio Defence: Zombie Arena and, if turning you into a panic-stricken jumpy mess, swivelling around on the spot is it’s aim, it makes a good thrash and getting you there.

But leaving you sodden and sweaty doesn’t necessarily a good game make, and Audio Defence: Zombie Arena is something of a one trick pony.

The basic concept is a simple one. With headphones implanted in your ears, you have to take down an approaching mass of zombies and ghouls eager to munch on your flesh. With no visuals at all to go on, the iPhone’s screen becomes little more than a rather flash remote control, serving up four buttons for you to mash on; one that fires your weapon, one that reloads the ammunition, one that switches it for another gun and one that acts as a melee attack. 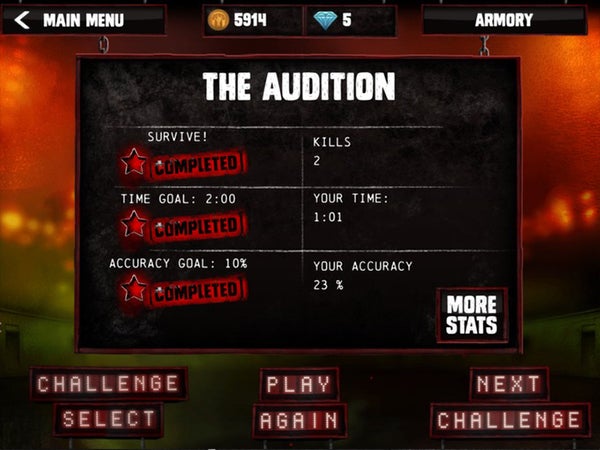 Success is a matter of hitting these buttons when required, all prompted by the sounds you hear around you. It’s a case of waiting for the approaching ensemble to get close enough, lining yourself up so you’re facing the way the noise is coming from and attacking as quickly as you can. By default you’ll use your iPhone’s accelerometer to do this, turning until the sound is central in your ears, though swipe or tilt-based controls are also on offer.

All of this is orchestrated by Audio Defence’s somewhat trying master of ceremonies, Doctor Bastard. His tones – taking the form of an almost constant commentary, where he looks to belittle your attempts to survive with the kind of put downs that would be better placed on the school playground – are designed to guide you through the game, arena by arena. However, they soon become an annoyance that adds a somewhat misplaced attempt at humour to what otherwise is a serious attempt to play with your senses. 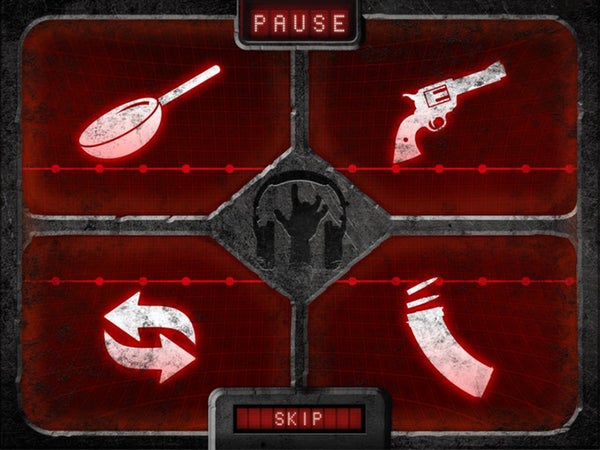 It’s logical to think, therefore, that Doctor Bastard exists merely to flesh out what is a fairly superficial attempt at sensory-based action. When Audio Defence plays all its tricks – enemies coming from all angles, moaning and salivating as they head your way – the action feels quite intense, thanks in part to the game’s built-in heartbeat, which thumps ever quicker the closer they get.

In reality, however, said tricks have only limited appeal. Extra features like slot machines that fire off random weapons that clear the room are undoubtedly designed to spice up proceedings, but essentially  your job remains identical whether you’re firing at a slot machine or a flesh-eating zombie: find where the noise is coming from and fire.

One of the game’s main problems, however, is unavoidable. Audio Defence teaches you to line yourself up so the sound you’re after is coming from dead centre. However, while you can physically turn 360 degrees, the sound pulsing out of your headphones is somewhat less 3D, coming out of either the left or right headphone, or both. As such, while you might think you’ve got the sound dead on, the enemy is actually directly behind you. The only way you can tell is that said noise is slightly louder when you’re directly facing it.

Of course, you’ve got no point of reference to tell which way round offers the loudest sound until you’ve faced both directions – by which time it can be too late. 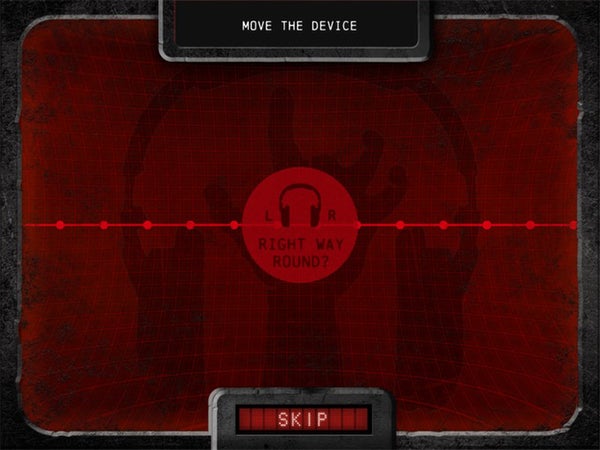 Nevertheless, more problematic than this is the fact that, though the difficulty level ramps up arena after arena – and there’s a play-until-you-die endless mode to contend with – there’s not enough variety here to keep play interesting, and the curiosity that first draws you into Audio Defence: Zombie Arena initially soon dissipates to leave you with…well, not very much, really.

In truth, Audio Defence’s issue isn’t that sound-only play isn’t strong enough to hold your attention, but rather that – even if it had visuals – simply mowing down zombies one after the other white rooted to the spot isn’t very entertaining. Intriguing as the game is in its early stages, developer Somethin’ Else has rather unwisely focused its attention almost entirely on the sound of Audio Defence: Zombie Arena, rather than on the gameplay it should be built around.

Verdict
Audio Defence: Zombie Arena’s audio-based action makes it a curious enough piece of entertainment to begin with, but its fixation with firing at approaching foe – all delivered via noises beaming into your headphones – is somewhat one dimensional, leaving you with a game far too fixated with a gimmick than with the gameplay behind it.