Atomic Floyd is the kind of name a group of geeky pre-teens might give to one of their friends. It’s not the kind of name you’d expect from a serious business. But in a world where Fanny Wang headphones exist, we’ve come to accept Floyd as one of the gang. Its latest headphones are the £200 Atomic Floyd SuperDarts + Remote. At this price, we expect no less than amazing sound quality.

Design
Before the Atomic Floyd SuperDarts Remote have a chance to wow us with their dual-driver sound, the design had us rapt. They are unusual in more than one sense.

Like all of Atomic Floyd’s earphones, the SuperDarts are made primarily out of metal. The ear of each earpiece is finished in embossed diamonds, giving them the feel of – you guessed it – a dart’s grip. If you don’t mind your earphones looking a little “out there”, they’re pretty attractive earphones. The mix of silver, red and black is loud, but not to the point of embarrassment, and they feel as well-built as earphones come. 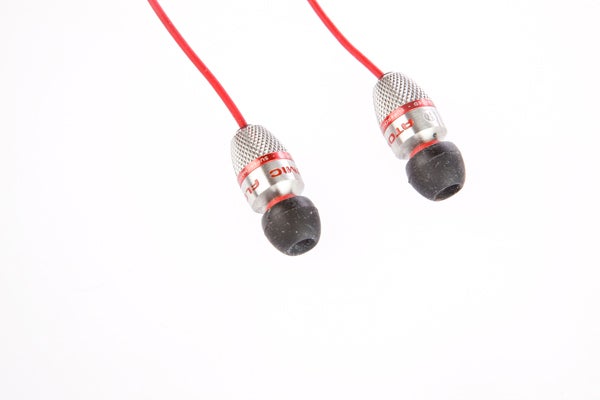 There are a couple of design decisions here that we find quite baffling, though. The Atomic Floyd SuperDarts’ cable doesn’t point downwards, but rather straight out of the back of each earphone. In order to coax the cable into heading groundwards, there’s a chunky little nugget of metal at the cable join, but this whole arrangement doesn’t really work for several reasons. 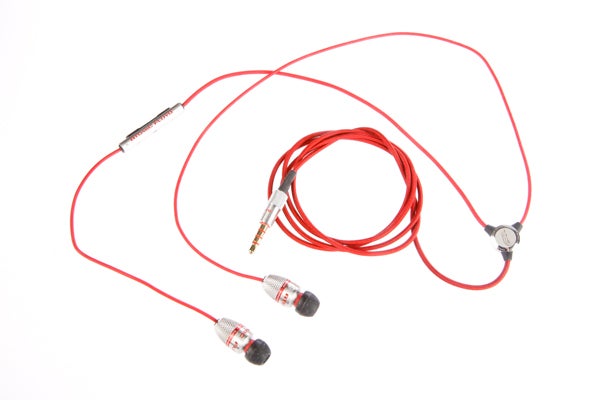 Comfort
First, it looks rather ridiculous as the cables still point out of your lug ‘oles further than normal – and it’s not like we need any help looking uncool as it is – unless you ram them far enough into your ears to risk irritation/infection. Second, adding superfluous weight is never a good idea in earphones.  While it’s not quite as bad as lugging around a dead albatross about your neck (the SuperDarts don’t smell of rotting carcass, for one), it is a noticeable weight.

You will undoubtedly get used to it, but these are not the most comfortable earphones around. And while some people complain about the size of the Shure SE535 and the odd fit of the Ultimate Ears Triple.Fi 10, we’d take wearing them over the SuperDarts any day of the week. And it’s all so unnecessary – for the sake of aesthetics and not a great deal else as far as we can tell.

However, the design isn’t all bad by any means. The cable switches from rubberised plastic up top near the buds to a fabric-braided finish further below, and it’s some of the best braiding we’ve seen recently in an earphone cable. There’s not a sign of it unravelling, no odd kinks, and it does seem to have a slight tangle-reducing effect. The 3.5mm jack plug is also impressively hardy, featuring the same sort of dart grip-like texture to help you pull the thing out. 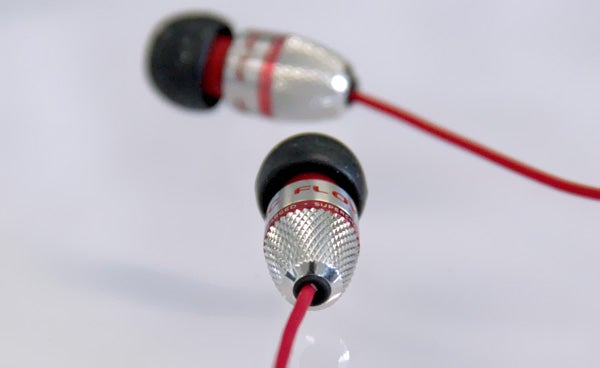 At £200, the use of a non-removable cable takes the shine off the otherwise excellent build, though. Similarly-priced alternatives like the Ultimate Ears Triple Fi 10 and Shure SE 425 make sure to offer removable cables, knowing the all-too-real possibility of destroying the jack cable is too horrible to contemplate.

Accessories
Like the earphones, the three-button iPhone remote control is covered with metal. Again, it doesn’t help the SuperDart Remote’s weight problem, but it feels strong and tough. The buttons themselves sit on a single piece of contoured rubberised plastic, and perform the usual actions. 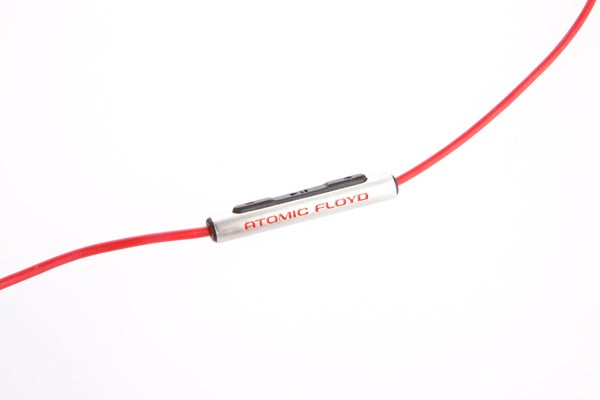 The outer ones handle volume, and the middle one pause/next track/previous, depending on how many presses you make. Music playback functions won’t work with an Android device. However, you should be able to take calls with most smartphones.

Also in the box are a 6.3mm jack adapter, an airplane adapter, a rubber carry case and three pairs of rubber isolating tips. The accessories package as a whole is good, but three tips is pretty stingy at £200, and they’re rather bizarre sizes. 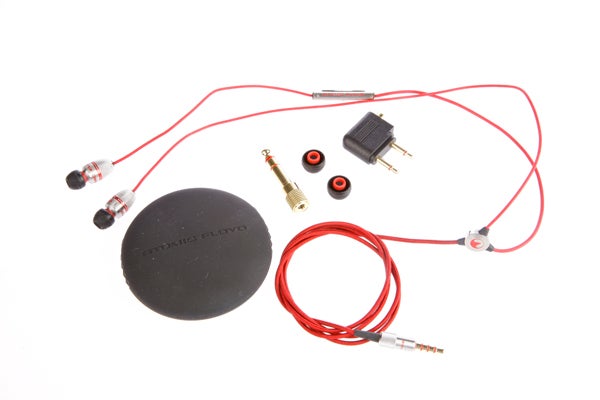 Roughly equating to the usual small, the usual large and what can only be described as XXL, some may not be satisfied by the tips on offer. And thanks to the weight of these buds, you need to attain a good seal to avoid them creeping towards the light, and out of your ears.

Atomic Floyd boasts about the “SoundProof” 2-way noise isolation of the SuperDarts Remote. However, what this boils down to is perfectly ordinary – they stop outside noise from getting in, and stop your music from getting out into the world.

The Atomic Floyd SuperDarts earphones give you an usual amount of freedom to choose quite how invasive they are. Supplying oversized tips means you can pitch them up near the entrance to you ear canal, or use the right-sized one and they’ll get about 3/4 of an inch away from your cerebellum. Opt for the latter in particular and noise isolation is very good.

However, microphonics – the rumbly noises created when the cable rustles up against your clothing – are particularly noticeable here, in part thanks to the big metal ingot at the cable join. Atomic Floyd offers goodies, but tends to supply them with a side salad of problems too. 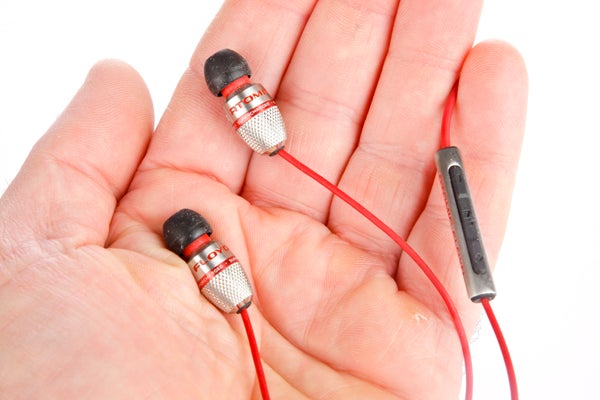 Sound Quality
In several respects, the Atomic Floyd SuperDarts Remote veer towards the “extreme”. The paint job, the conspicuous metal construction and the odd cable design – all help to separate these earphones from the headphone standard.

The sound is no different. These earphones use two drivers per earpiece. However, where the majority of multi-driver earphones use an array of micro armature drivers, here there’s a mix of the dynamic and armature type – one of each. Armature drivers are renowned for their accuracy and detail, while dynamic drivers are adept at providing bass. Is it the perfect marriage?

In some respects is it. The Atomic Floyd SuperDarts offer intense, biting top-end detail, with greater crispness than the majority of rivals at the price, including the Shure SE 535 and Sennheiser IE8i. 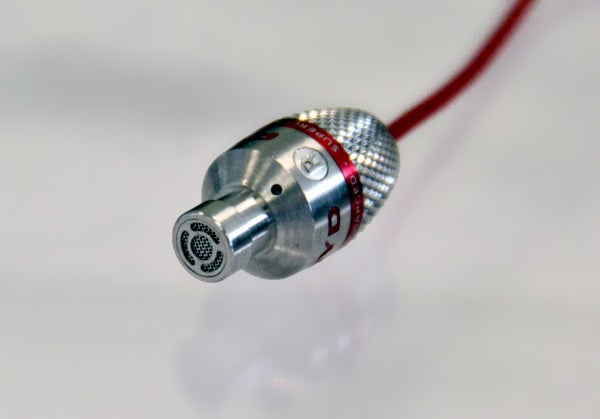 Bass performance is excellent too. There’s no muddying mid-bass hump, plenty of power and quite remarkable low or “sub” bass. Hand the SuperDarts some dubstep and it can handle the genre’s low frequency basslines with unusual authority. And the bass never appears to be bloated because slightly higher up the frequency spectrum, where the low-end starts to merge with the mid-range, the SuperDarts are more reserved.

Performance at these extremes is quite notable, but there’s a distinct V-shaped sound here that can at times seem larger-than-life to the point of being almost cartoonish. There isn’t much mid-range warmth or presence here, and the tone isn’t all that balanced – certainly less so than we’d expect at the price. The top-end can often seem a little aggressive, lacking the light touch and fidelity to handle the bright sound signature. They can become a little harsh when pushed. 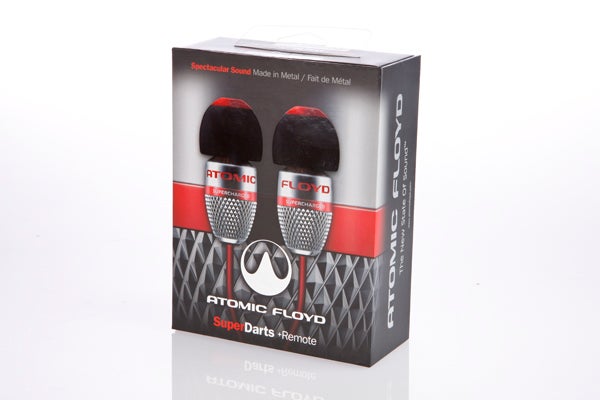 While there are factors to the sound here that better rivals at the price, the greater cohesion of the Sennheiser IE8i and Ultimate Ears Triple Fi 10 keep them above the SuperDarts on our favourites list. We’ll have to hand it to Atomic Floyd, though, they absolutely supply the “big beating heart pumping bass” and “acid sharp details” promised on the company’s website.

Verdict
The Atomic Floyd SuperDarts clearly want to make an impact, and these earphones do just that. An unusual design, and more balls-to-the-wall elements than pairs from the bigger names make sure of it. However, some comfort issues and the tiring lack of mid-range warmth to the otherwise impressive sound stop it from becoming a high-end classic.