We recently looked at the ASUS V550C: a £500 laptop that did very little wrong, but didn’t really excel in the price bracket either. Well, we’re back looking at the Asus X550CA-XO113H, which retails for £170 less, and could be ideal for the family on a budget or the student wanting to do basic word processing and web browsing. It’s got an Intel Celeron processor, 4GB RAM and a 500GB hard disk,
which is certainly lower specs than the laptops we’ve been looking at of late, but can it punch above its weight to be bargain of the year? 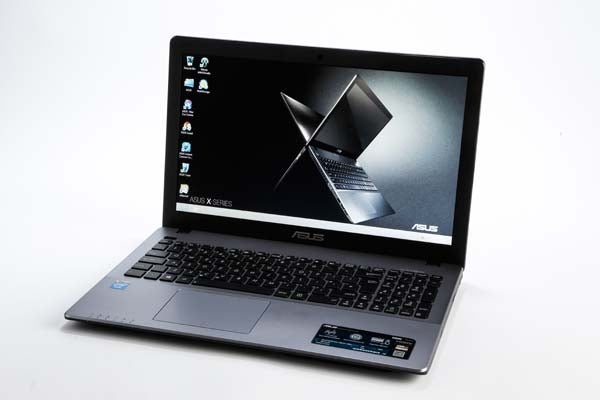 Like the V550C, the X550C has plenty of the trappings of an Ultrabook in terms of appearance, although at 15.6-inches, it’s fooling nobody really. Still, it’s very thin all round and has the stylish minimalism that’s in laptop style at the moment. Like the V550C, it’s black, rather than chrome, although the texture is completely different – markedly cheaper. Asus describes it as a ‘classic spin line finish’. What this actually means is it feels ever so slightly like vinyl, with the circular grooves from the Asus logo in the middle to the outside of the lid.

When you lift the lid, the colour-scheme changes to a metallic silver around the keyboard, although the black remains on the plastic bezel around the screen. The keyboard area is textured with small dimples around the touchpad, but around the keyboard it’s mainly smooth, adding light dots just above. It’s an eclectic mix of styles that doesn’t quite come off in our view. You can definitely tell it’s on the cheaper end of the laptop scale, especially as the keys make an off-putting rattling noise when you type at anything approaching speed. 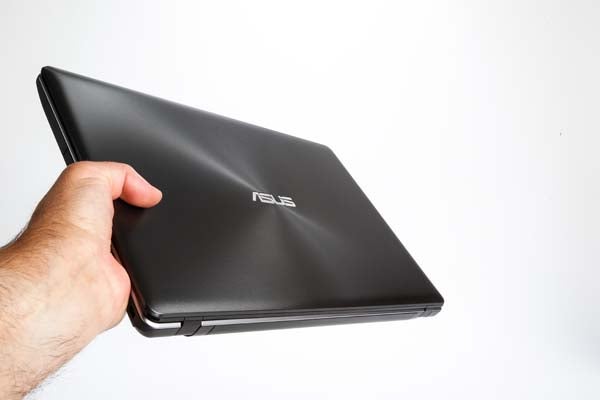 All of the connectivity is down the left hand side of the laptop with a VGA port, two USB slots, an HDMI port, an Ethernet port and a headphone/microphone jack. On the right hand side, there’s a DVD drive – impressive considering its low price, and the fact that it’s really rather slim. So slim in fact, that the Ethernet port requires the plastic to be pulled down a little to make the cable fit.

One area the laptop saves costs is through its screen – there’s no touch controls, which is fine because we don’t use them that often in Windows 8 anyway. What’s less fine is the general quality it offers: while the brightness is generally okay, the resolution of 1366 x 768 isn’t too great which leads to slightly blurry images. Worse, it’s really pixelated when viewed up close – it’s particularly noticeable on the icons, which are clearly squared off in an obvious mesh style on the screen. The colour accuracy is okay, if a little washed out, but the viewing angles aren’t too bad. 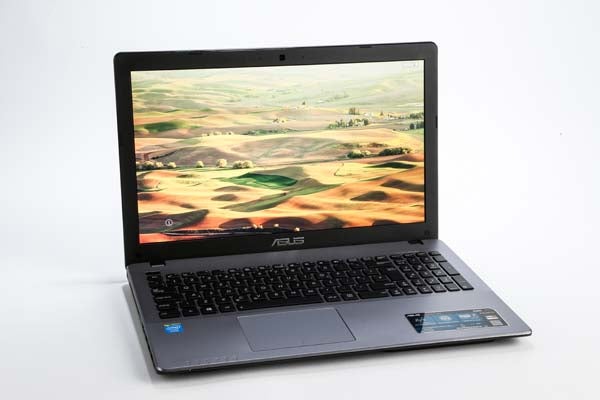 To be entirely fair, we shouldn’t expect anything more from a £329 laptop, and its perfectly fine for everyday use – it should just be noted that the screen is one of the more obvious areas of cost saving.