As the brackets suggest, this is the 2013 edition of Apple’s AirPort Extreme wireless router. The big news this time around is Apple has added the next generation 802.11ac wireless standard to bring it up to date with the latest flagship routers from the likes of Asus, D-Link, Linksys and Netgear. Given the previous AirPort Extreme was released over two years ago, Apple has also overhauled the design, which the company claims is “rebuilt for speed”. 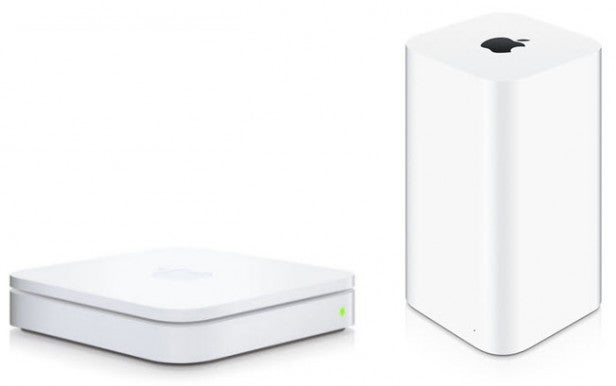 So what does this spruce up entail? Gone is the formerly flat, traditional rectangular design of the 2011 edition to be replaced by what can only be described as a white, elongated Apple TV (see comparison above). The logic is the switch in form factor allows Apple to position the antennas at the top, creating a higher platform for signal dispersal. It also reduces the Extreme’s desktop footprint by 64 per cent with the base measuring just 98 x 98mm compared to the 16.5 x 16.5mm of its predecessor.

This being Apple ‘rebuilt for speed’ isn’t the only motivation, there is no doubt that ‘rebuilt for style’ was also a key consideration as the AirPort Extreme is by far the best looking router we have ever seen. This might seem glib for a product which is essentially a white, angular tube, but the result is a router that is both minimalist and eye-catching and the gentle curves are simple yet dramatic enough that we can imagine Jonathan Ive agonising with his protractor for weeks.

A nice touch is Apple has built in the power supply to keep cabling neat. In short, the company has rewritten the rule book for router design.

Construction is outstanding, too. Typically we forgive routers their somewhat hollow and cheap plastic construction because of the protests that this is needed to let signal pass through. Apple has scoffed at this and the new AirPort Extreme is solid, weighing in at a hefty 945g, and the casing is clearly cut in a single piece with beautifully drilled port and power slots.

If we were to quibble, Apple’s choice of a matt finish for the top and gloss finish for the sides is a little inconsistent, but it isn’t overly noticeable and both are highly resistant to fingerprints. It also seems laughable Apple has including just a single pinhole status light on the front, but many will stomach such wild impracticality for the superficial benefits it brings. 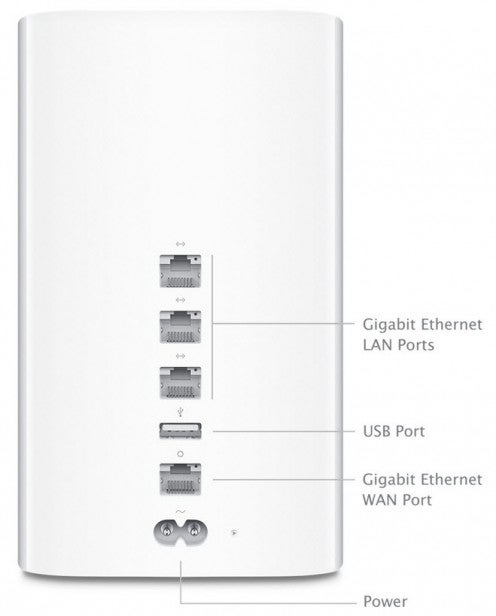 We’ve haven’t talked so long about router design before so we’ll crack on through the features and the first thing to notice is the theme of minimalism continues, but this time in an area it is not welcome.

Of course the headline act is the new Extreme’s 802.11ac wireless and its backwards compatibility with 802.11a/b/g, but aside from this numerous corners are cut. Illustrating Apple’s stubbornness over standards it dislikes, the Extreme is the only modern, premium router we’ve seen to omit WPS and even takes the effort of fudging the standard with pin codes to connect WPS-based printers.

Apple isn’t overly keen on incorporating standards it does like either and, like the new Time Capsule range, the 2013 Extreme continues to ignore AirPlay missing out on a powerful differentiator. There are also just three Gigabit Ethernet ports rather than the usual four to accompany the WAN port and a single USB 2.0 port, for sharing a hard drive or printer across the network, when a minimum of two or at least one USB 3.0 port tends to be the bare minimum for high-end routers these days.

One the plus side, the Extreme can operate both as a router and wireless bridge (at which point the WAN port can be used as a fourth Gigabit LAN), there’s IPv6 support (which works over PPOE for the first time) and WPA and WPA2 encryption standards aboard. But it isn’t enough.