The Asus GL 12CX is worth a look for those seeking a compact but capable gaming PC, but it isn't without its foibles.

What is the Asus ROG Strix GL 12CX?

The Asus GL12 CX is an impressively compact PC that packs in masses of gaming performance. Inside its modest frame it houses an Intel Core i9-9900K, an Nvidia RTX 2080 and plenty of storage, RAM and an optical disc drive too.

All this doesn’t come cheap, with this version of the PC reviewed here costing a cool £3000. But, for that outlay you do get plenty of performance.

Elsewhere, there’s nothing particularly exotic going on with the design and build of this PC – just a few RGB lights on the front. However, if you simply want a hugely powerful, but not huge, PC then it’s worth a look.

We’ve seen our fair share of compact gaming PCs recently, such as the Alienware Aurora and astonishingly tiny Corsair One. As such, the GL 12CX isn’t breaking any new ground. Nonetheless, this is a smaller PC than many.

In terms of design, it’s dominated by angular plastic sections that sit on the front and top of the otherwise black-painted steel case. The look is certainly a little different to your more generic rectangular box. 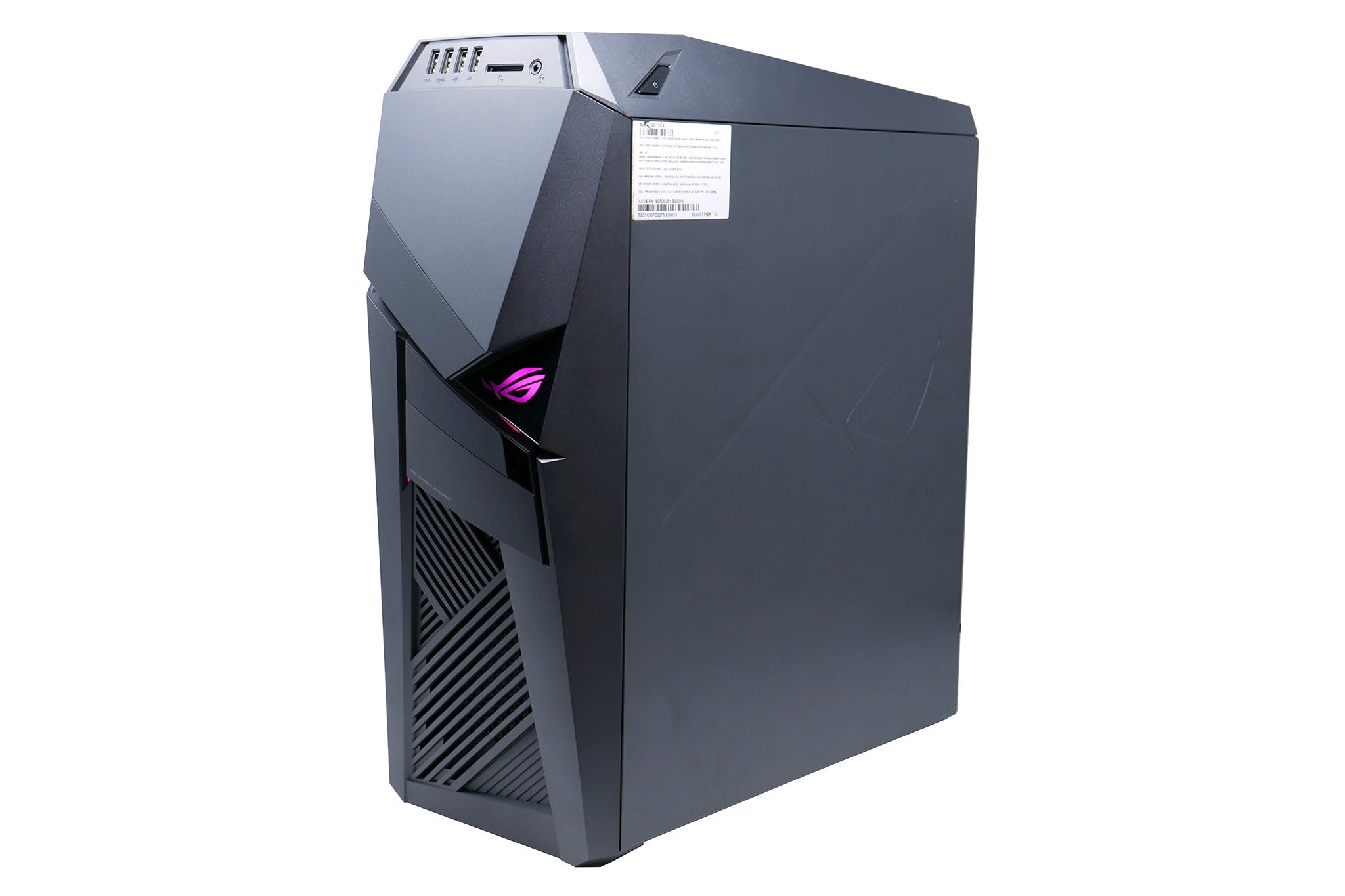 There are also a couple of glossy plastic sections on the front, along with some RGB lighting zones that are the calling card of Asus’ Strix-branded products. It’s a modest smattering of lights, however, with just a backlit Asus ROG logo and a couple of glowing lines on the front.

You can also remove the left side panel and replace it with an included plastic panel that allows you a view into the interior of the case. However, don’ expect the glass side panels and illuminated interiors that are all the rage in DIY PC building circles.

Indeed, overall, the GL 12CX’s design is somewhat underwhelming for such an expensive PC. While the PC does come in more modest configurations than the one reviewed here (although good luck finding them), the fact that the same case is used for such high-end components is a little disappointing. The likes of the HP Omen X, Corsair One and Alienware Aurora all outclass it.

As far as more practical considerations go, the GL 12CX’s case is largely a conventional affair. The steel side panels are held on by screws at the back and slide off to reveal the innards of the PC. On the left side is the main section with most of the components, while the right side panel reveals the underside of the motherboard tray and mass of cabling that connects everything together.

Along the bottom is a sectioned off area for the power supply and yet more cabling, while across the centre is the graphics card, which is held in place by a reinforcing bracket.

Up in the top, towards the front, is a CD/DVD drive and a bracket, alongside cabling for a 2.5-inch hard drive or SSD. In the box you’ll find a 2.5-inch drive tray that fits into this slot, so you can have a quick-release 2.5-inch drive accessible through the front. The main hard drive is a 3.5-inch model that sits in the bottom of the case, while the SSD is attached directly to the motherboard via a strange riser card. 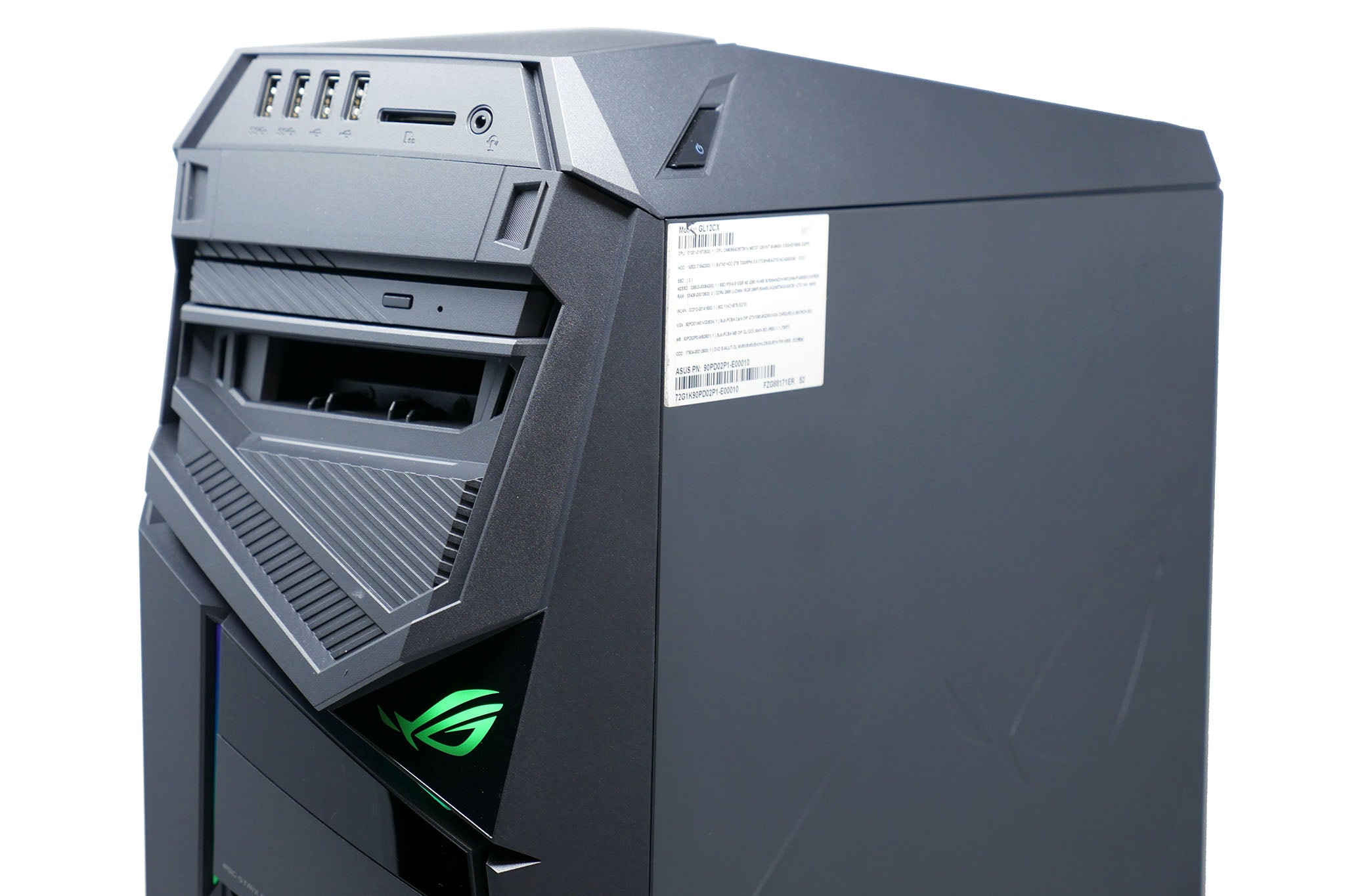 All other ventilation for the case is handled by a single 120mm fan sucking air in at the front and a 92mm fan blowing air out the back.

Back to the front of the case and you can access that DVD drive by removing a magnetically attached plastic plate that covers the front. Once removed, the case looks decidedly less smart. A solution that sees the front plate flip upwards on a hinge seems like it would have been a bit more elegant.

Above this area you’ll find a selection of ports, consisting of two USB 3.0 ports, two USB 2.0 ports, an SD card reader and headphone jack. That’s a useful selection, although a USB Type-C port would have been welcome too.

Meanwhile, round the back of the PC you’ll find six USB 3.0 ports, two USB 2.0 ports, Gigabit Ethernet, five audio jacks and optical digital audio output along with the video outputs from the graphics card. It has two DisplayPorts, one HDMI and one USB Type-C port. You also get in-built 2×2 802.11ac Wi-Fi.

Inside this GL 12CX is a monstrously powerful set of hardware, although the exact configuration you get will depend on which version you buy.

Here you get an Intel Core i9-9900K, which is a mighty 8-core chip that can process up to 16 threads at a time. It also runs at between 3.6 and 5GHz and is overclockable, making it a true powerhouse.

Impressive as this chip is, it’s worth noting that as far as gaming is concerned, it’s totally unnecessary. Most gaming PCs need no more than a quad-core chip, so you could easily save yourself a significant chunk by opting for a system with a more basic CPU such as the 9600K. Instead, the 9900K will be useful for more workstation-orientated tasks such as video editing. 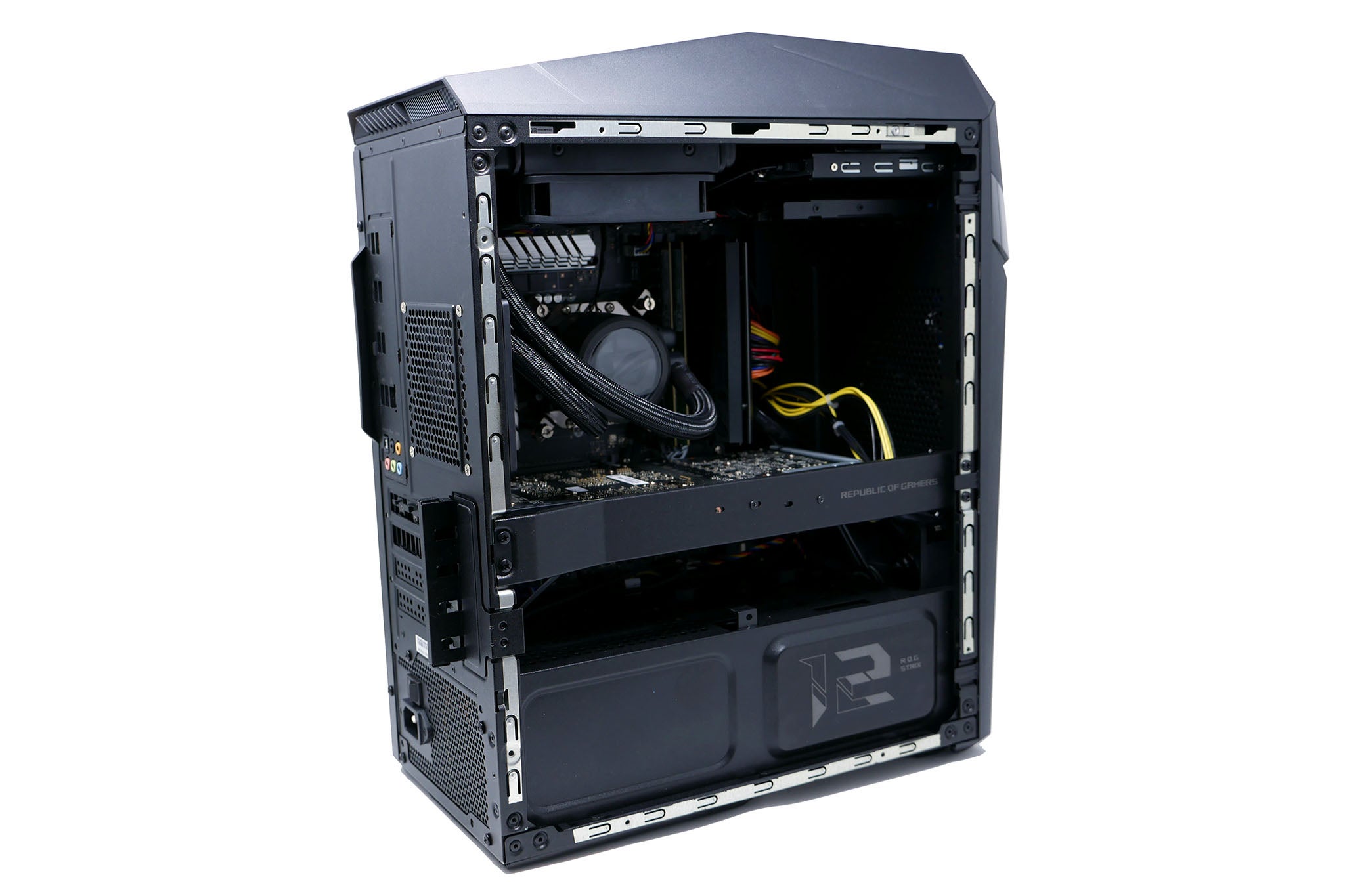 Then there’s the Nvidia GeForce RTX 2080 graphics card, with its 2944 stream processors and 1710MHz clock speed. This is a very powerful graphics card that should easily deliver frame rates well in excess of 100fps in most games at 1440p resolutions and above.

Joining this hugely powerful combo is a plentiful 16GB of DDR4 RAM running at 2667MHz, which is adequate for just about anything you might throw at a machine such as this. You also get a 512GB SSD and 2TB hard drive, so there’s plenty of room on the faster SSD for all your games and apps as well as that 2TB of slower storage for all your videos, pictures and music.

It’s also somewhat of a surprise to find an optical drive in this system. Remove the front plate and underneath is a slim-line laptop-style CD/DVD drive. There may be fewer and fewer uses for such drives these days, but it’s still nice to have one on the odd occasion. 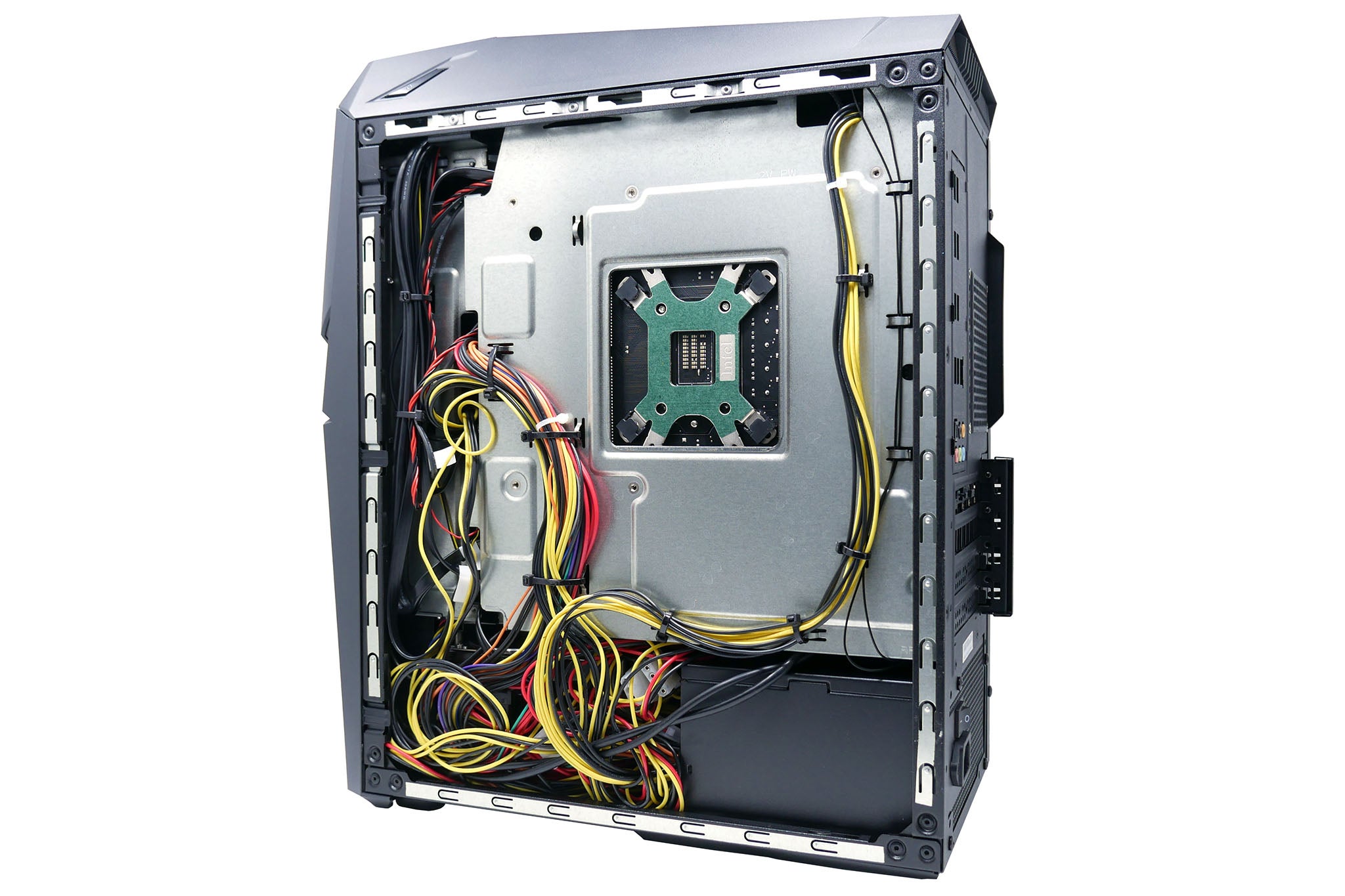 The motherboard here isn’t one straight from the Asus consumer range. Instead, it’s simply labelled as the “GL 12CX Main Board”. Regardless, it’s based on Intel’s Z390 motherboard chipset and includes two RAM slots, an M.2 slot for the SSD (via a riser board), 2 x 2 802.11ac Wi-Fi and plenty of connectivity.

Jump into its BIOS, though, and it offers very few of the extras you’d get in a consumer motherboard. You can’t overclock the CPU or otherwise tweak anything at all. Instead, Asus provides some pre-installed software for tweaking various aspects of the performance.

Along with your expected copy of Windows 10, the GL 12CX arrives with a whole stack of pre-installed Asus software.

You’ve got Armoury Crate, which is the main management software for the PC. It provides options to tweak the front case lighting, switch between power modes that overclock the PC, and change the fan speed profiles (Windows, Balanced, Turbo and Manual) and select what other Asus software to install. 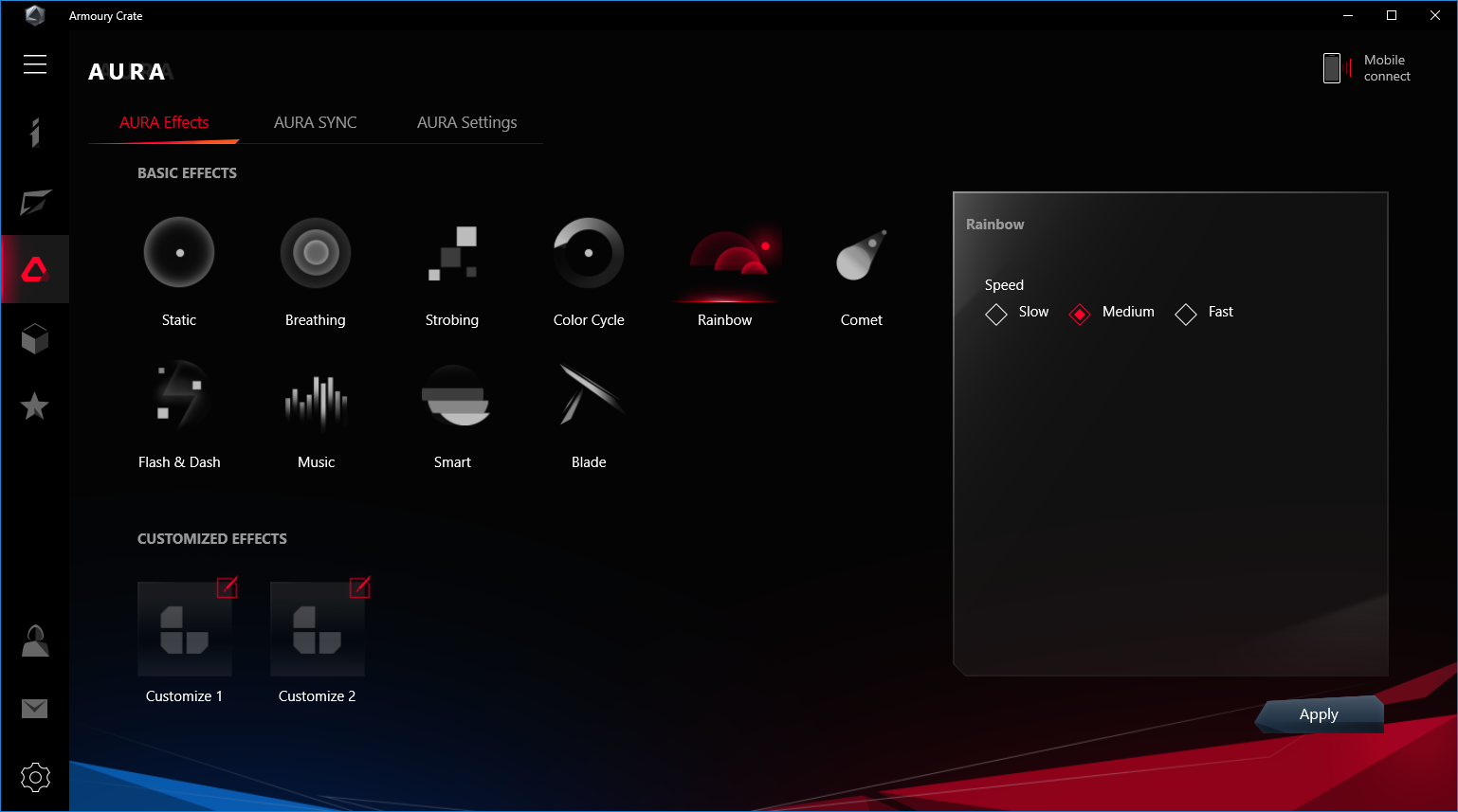 Then there’s Sonic Radar, which is the company’s audio management software. Among other things this defaults to displaying an annoying visual overlay on your games that shows various audio settings. It took us quite a bit of searching around to work out what was causing this distraction in our games. 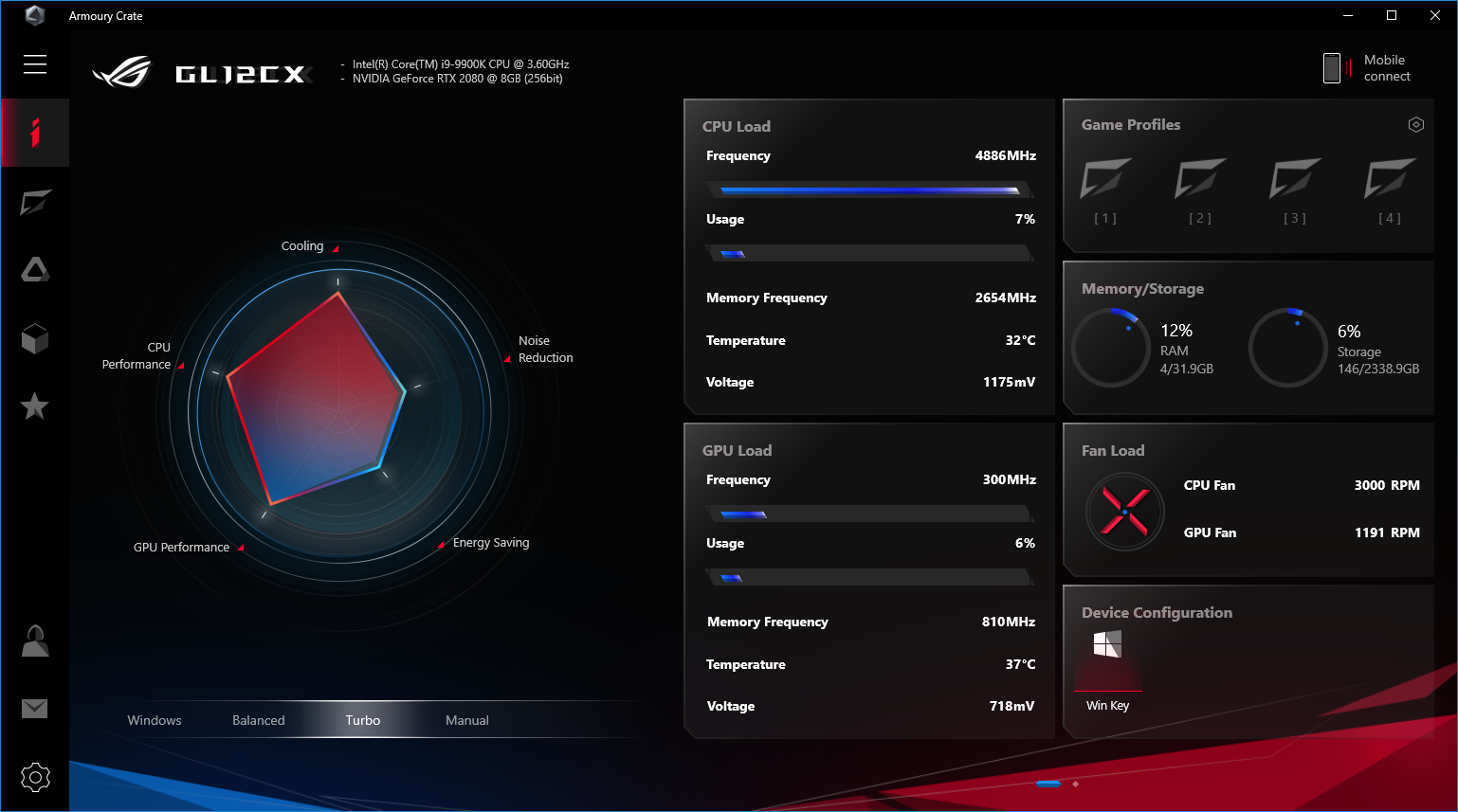 You also get GameFirst, which provides options for prioritising network traffic through your computer’s network connections. Meanwhile, Asus GiftBox provides a portal for downloading other software for use with your PC. 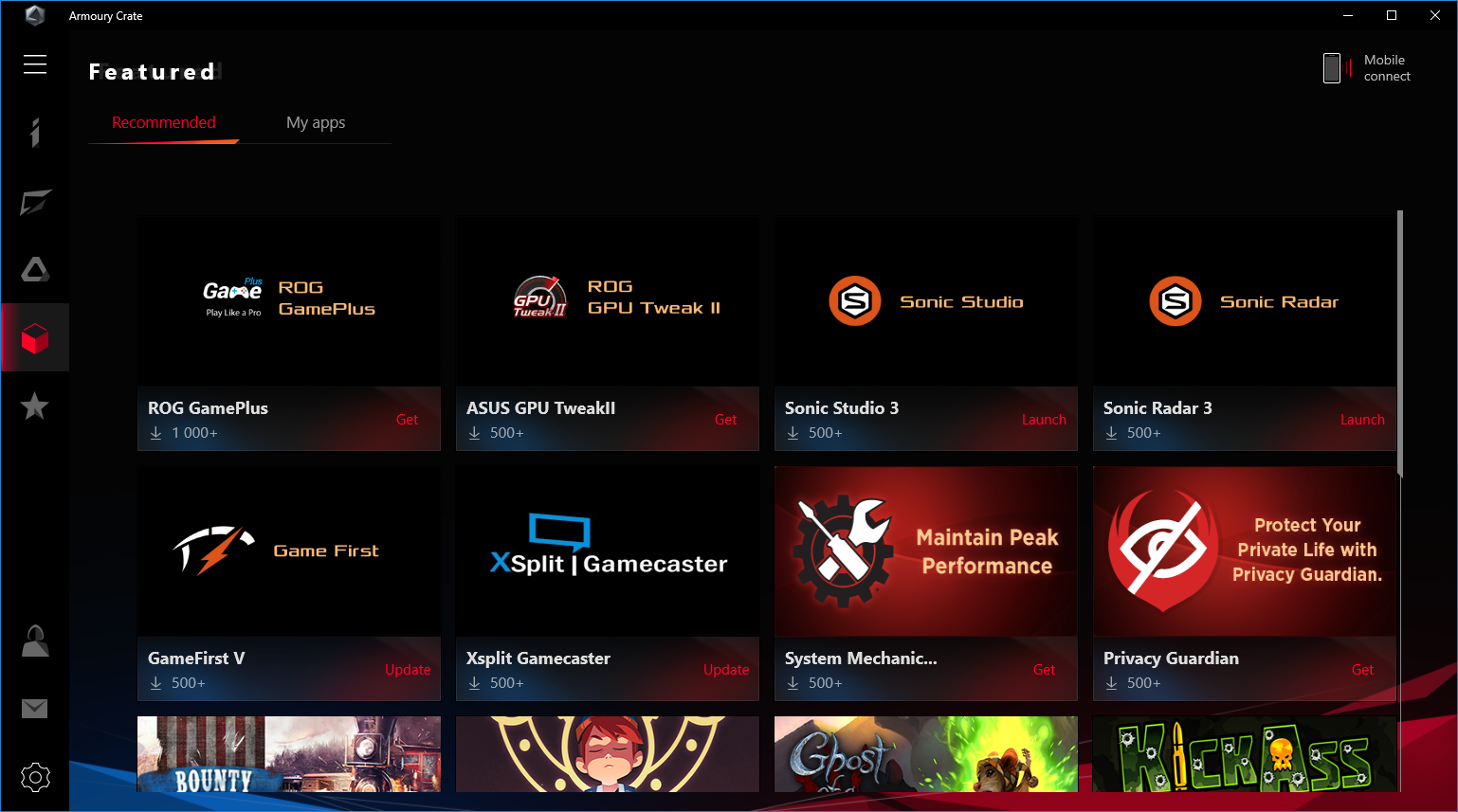 Most of the software has its uses, but it’s all a bit much, especially since it’s all installed by default and has some default functionality that interrupts the normal function of your PC. It isn’t that we’d prefer not to have this software, but a slightly cleaner way of managing it all would be nice.

Starting our performance testing with the Intel Core i9-9900K, and while it may be overkill for a normal gaming PC, there’s no denying its huge performance potential. In the Geekbench 4 benchmark its single-core score of 5190 is one of the fastest we’ve recorded for a pre-built PC, while its multi-core score of 31,624 is the fastest ever.

The Nvidia RTX 2080 graphics card is also very capable. Technically, it isn’t the absolute fastest graphics card you can buy right now – but it’s right up there. In our Rise of the Tomb Raider benchmark, which runs at 1080p resolution with very high detail settings, this PC delivered 120fps. Bumping up to 1440p resolution and it still managed 109fps. In Middle-earth: Shadow of Mordor it fared even better, hitting 193fps at 1080p and 140fps at 1440p. In 3DMark: Fire Strike Ultra it scored an impressive 6172 points. In all but the very most demanding games you can expect to get over 100fps, even at maximum detail settings.

Also impressive is the speed of the 512GB SSD in this PC. It’s a Samsung SM961 and it boasts mightily fast performance in every regard. It can read data at up to 3352MB/sec and write it at 1908MB/sec, resulting in fast PC boot times, game load times and file transfer times. There are few faster SSDs available.

The same can’t be said of the basic Toshiba 2TB hard drive, but its performance is typical for a budget drive.

Where things take a bit of a wobble is when it comes to cooling. Not that it can’t keep cool, but that its attempts to do so can result in a lot of noise. This thing sounds like it’s taking off when booting up, and under high CPU load it can hit 52dB according to our tests.

At least, that’s the case in its default Turbo mode. Enter the Asus Armoury Crate software and turn the PC down to Balanced mode and it’s far quieter. It hit just 36dB in the same test.

You do miss out on a smidge of performance by opting for this mode, with our Cinebench benchmark score dropping from 2055 points to 2016 points, but this amounts to less than a 2% difference. A small price to pay for a massive reduction in noise.

The graphics card also makes plenty of noise when gaming, but this is a more common and understandable problem with gaming PCs – and this PC is no worse than most. 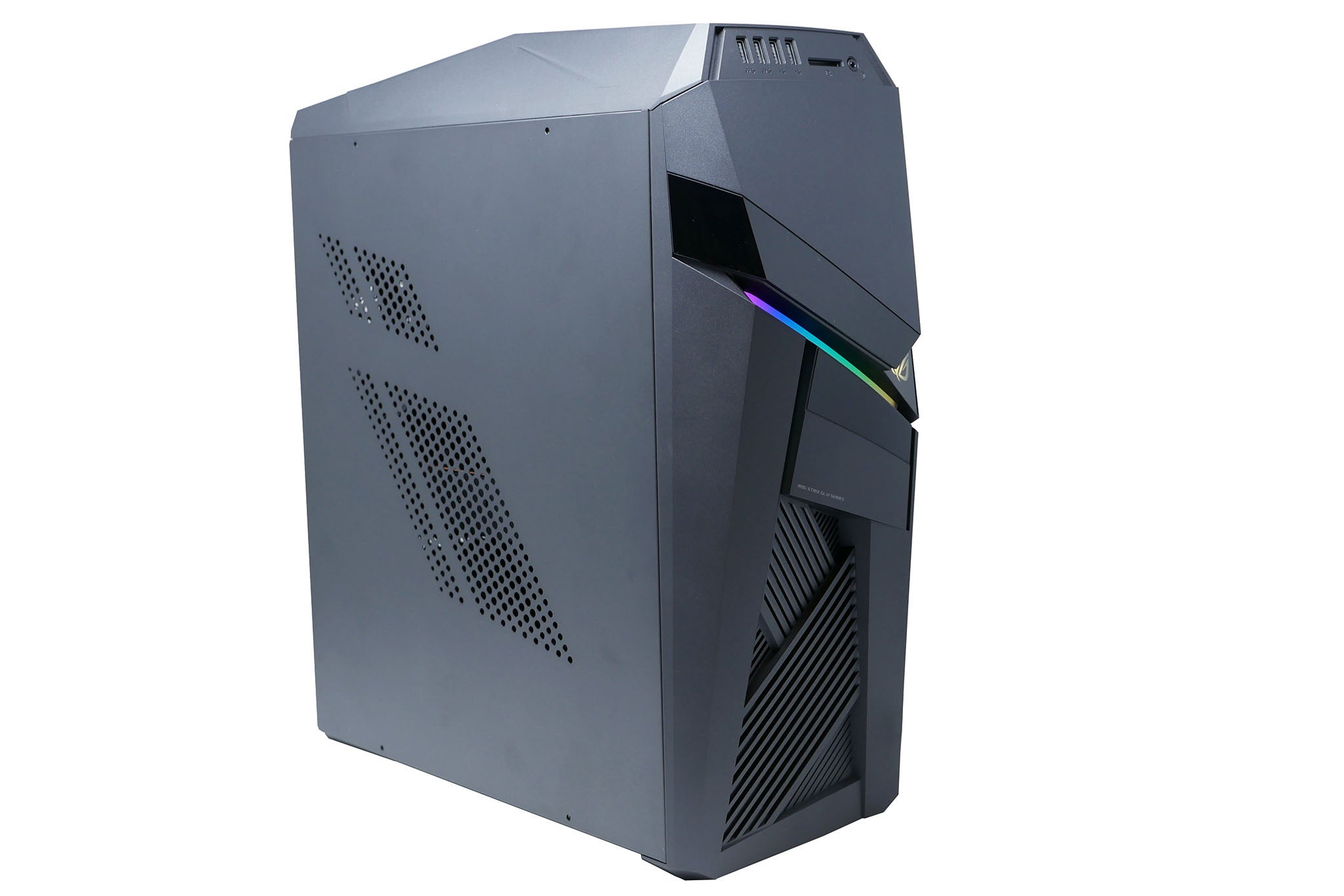 The GL 12CX is an impressively compact and powerful gaming PC that includes all the features you’d need. Its fast CPU and GPU tear through any gaming challenge you throw at them, and the speedy SSD ensures boot-up and game-loading times are fast, too.

The machine is also fairly easy to upgrade, and you even get a CD/DVD drive, which is far from a given these days.

However, the GL 12CX’s styling is a bit lacklustre, and its CPU cooling solution very noisy. The lack of any USB Type-C ports is a disappointing oversight, too.

Then there’s the fact that the most commonly available configuration of this PC uses an Intel Core i9-9900K, which is far more CPU than most gamers will need. Sure, it only costs £80 more than a 9700K, but when even a 9600K is more than enough, many buyers would be better off seeking out a slightly more balanced system.

The Asus GL 12CX is worth a look for those seeking a capable compact gaming PC, but it isn’t without its foibles.