The Asus ROG Strix G15 is as flashy on the outside as it is on the inside. Its Electro Punk design is certainly eye-catching, but may be too garish for some, especially when paired with the RGB light bar. But with some cutting edge specs, this gaming laptop is showing a lot of promise at its attractive price point

The Asus ROG Strix G15 gaming laptop has seen a mighty refresh, not only hopping aboard the bandwagon for Intel H-Series and Nvidia RTX Super component upgrades but also seeing a lick of new paint for snazzy Electro Punk styling.

Asus has given a slew of its laptops and gaming peripherals an Electro Punk makeover, with the black and pink colour combo standing out from your general portable.

Only the 15-inch Strix G laptop is lucky enough to see the limited-edition colourway, although the 17-inch version does at least feature the new Intel and Nvidia components.

Such new-fangled specs should give the refreshed ROG Strix G a performance boost to ensure higher refresh rates and improved visuals. Nvidia’s RTX cards also provide high-end features such as ray tracing – the same technology the PS5 and Xbox Series X are championing.

An impressive spec sheet then, but how good is the ROG Strix G in practice? We went hands-on with the upcoming laptop for a closer look.

Asus ROG Strix G15 release date – When will it launch?

The Electro Punk version of the ROG Strix G15 will be available from mid-June in the UK. We will update this article once we get a more exact release date.

Asus ROG Strix G15 price – How much will it cost?

The Electro Punk ROG Strix G15 is confirmed to have a starting price of £1199.99. However, you’ll have to pay more to configure it with high-end specs such as Nvidia’s RTX 2070 Super graphics card. 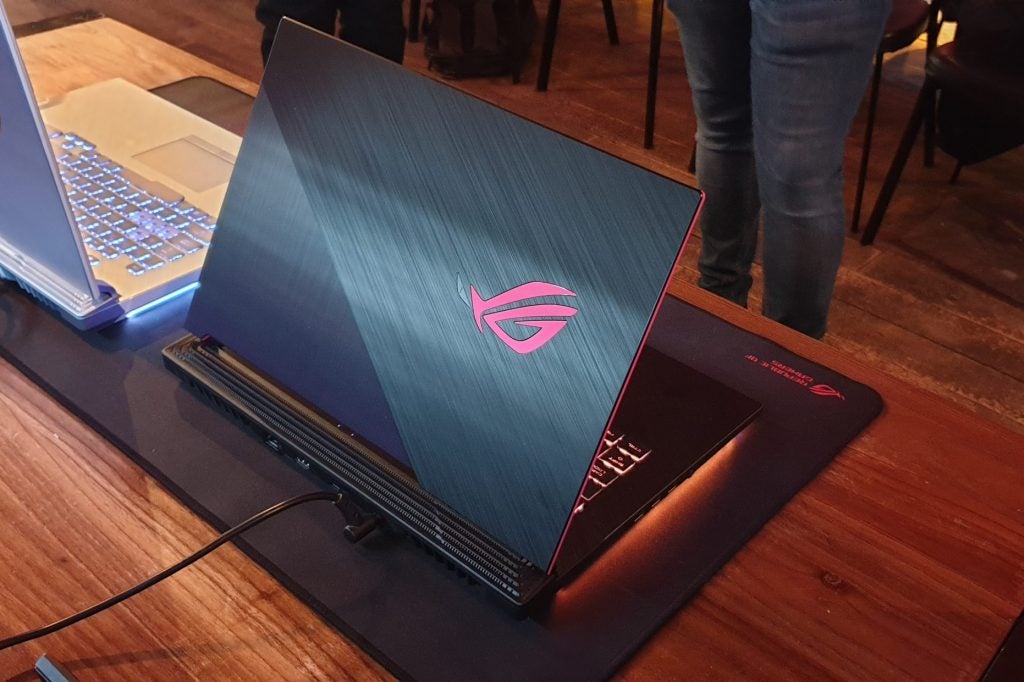 Asus invited me to a press event in London in March to get hands-on time with some of its most exciting gaming laptops set to launch in 2020.

While the Asus ROG Zephyrus Duo 15 certainly dominated the spotlight at the event thanks to its eye-catching dual-screen design, it’s actually the more subtle Asus ROG Strix G15 that I’ve got my bets on as having the most significant impact in the market.

The ROG Strix G15 is a far more straitlaced laptop, with no headline-grabbing gimmick on show. That said, in typical Asus ROG fashion, this laptop clearly isn’t ‘subtle’ compared to other gaming laptop rivals.

A newly launched Electro Punk design looks just as striking as it sounds, with a dark black chassis complimented by a hot pink rim and logo on the lid. On paper, it sounds sickly. But in practice? It looks really smart and shows laptop manufacturers don’t need to stick ardently to blanket black, silvers and greys to remain classy. 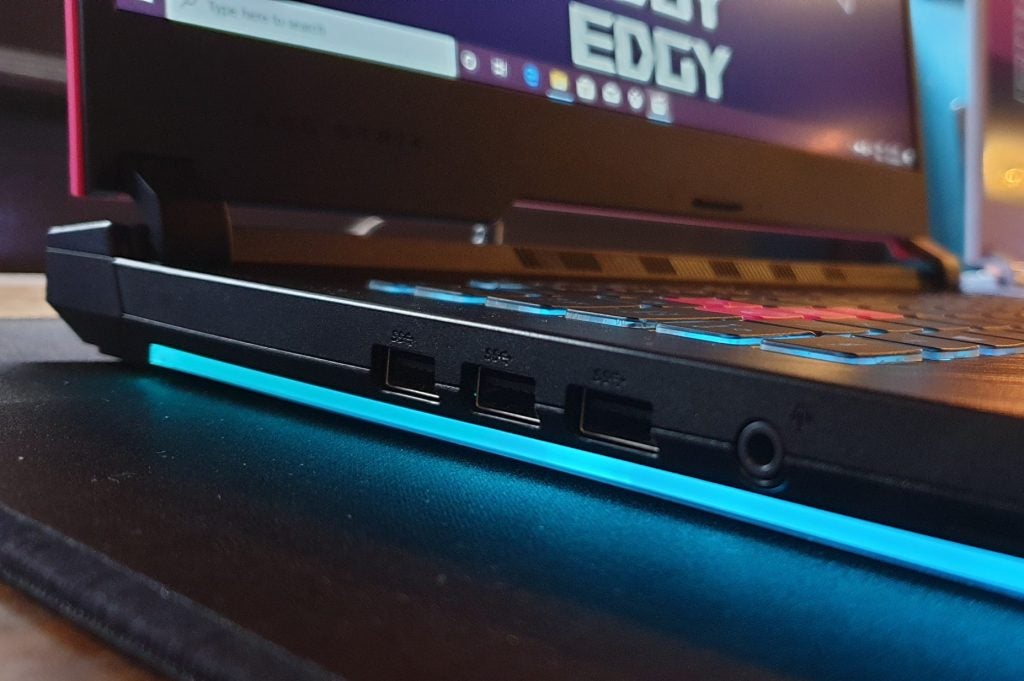 An RGB light strip also runs around the bottom edge of the main chassis, which is bound to be accused of being ‘overbearing’ by those who prefer a minimalist approach. I quite like it, although it’s something I’d want to restrict to home use – nobody wants to see the light show at the office or internet cafe. Fortunately, you can deactivate the RGB lighting permanently if you’re not a fan, or at least customise it to your taste.

It’s easy to become mesmerised by the design choices but the ROG Strix G15 is just as bold inside as it is out. Asus has fitted it with Intel’s 10th Generation H-Series processors, which are so new we don’t have any performance data to provide a glimpse of its performance power. We’re expecting a sizable jump from Intel’s own 9th Generation counterparts though.

The Asus ROG Strix G15 also offers graphics card options up to Nvidia’s RTX 2070 Super – another brand new component recently announced. This will be one of the very first gaming laptops to have the luxury of such cutting edge technology and we’re excited about what this thing is capable of. 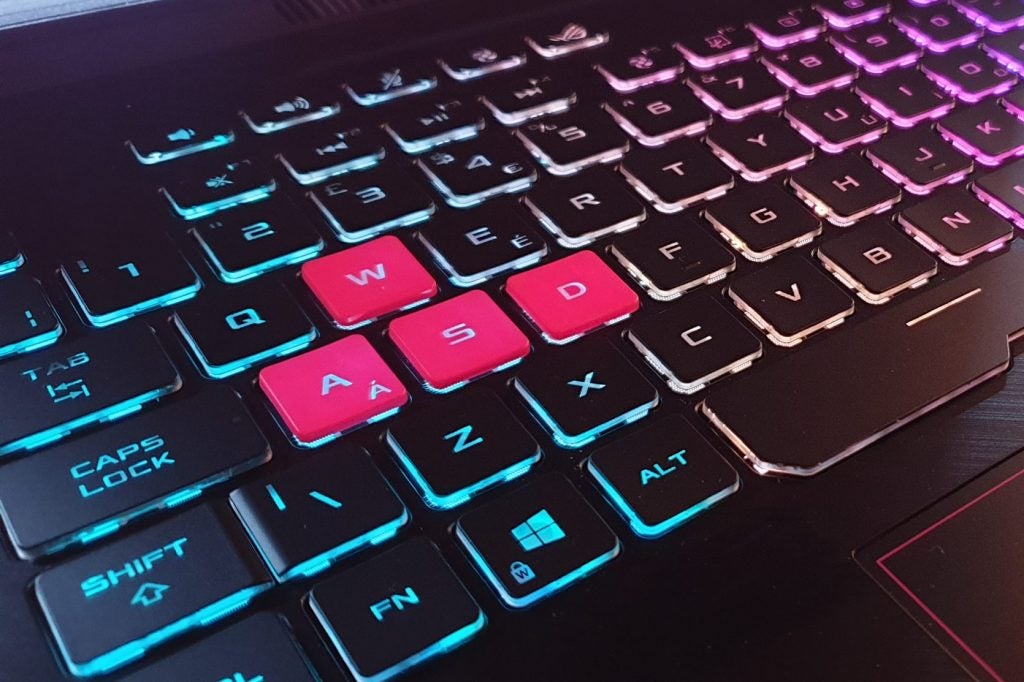 To partner that powerful GPU, the 15.6-inch screen can see refresh rates spiral all the way up to 240Hz, which should easily be speedy enough to please even the most competitive gamer. The IPS panel also means picture quality shouldn’t be compromised. The Strix G15 is limited to a Full HD resolution, although I think that’s a good thing, as 4K would only boot up the price and lower the frame rates.

The jaw-dropping specs don’t stop there, as the Asus ROG Strix also features up to 32GB RAM and two M.2 NVMe PCle SSDs with storage capacity up to 1TB. There’s even a third SSD slot available if you fancy upgrading your storage. There’s not much more you could ask for in terms of specs.

There’s a drawback from having such powerful components though, as the ROG Strix G15 weighs a hefty 2.39kg and measures up at 25mm thick. Saying the Strix G15 has a ‘desktop replacement’ form would be unfair but it’s probably not something you’d want to be lugging to and from the office every day.

On the plus side, there’s plenty of room for ports here as the Strix G sports 3x USB-A, USB-C (Thunderbolt 3), HDMI and Ethernet. The laptop also supports Wi-Fi 6, allowing for faster and more reliable network connections provided you have a compatible router. 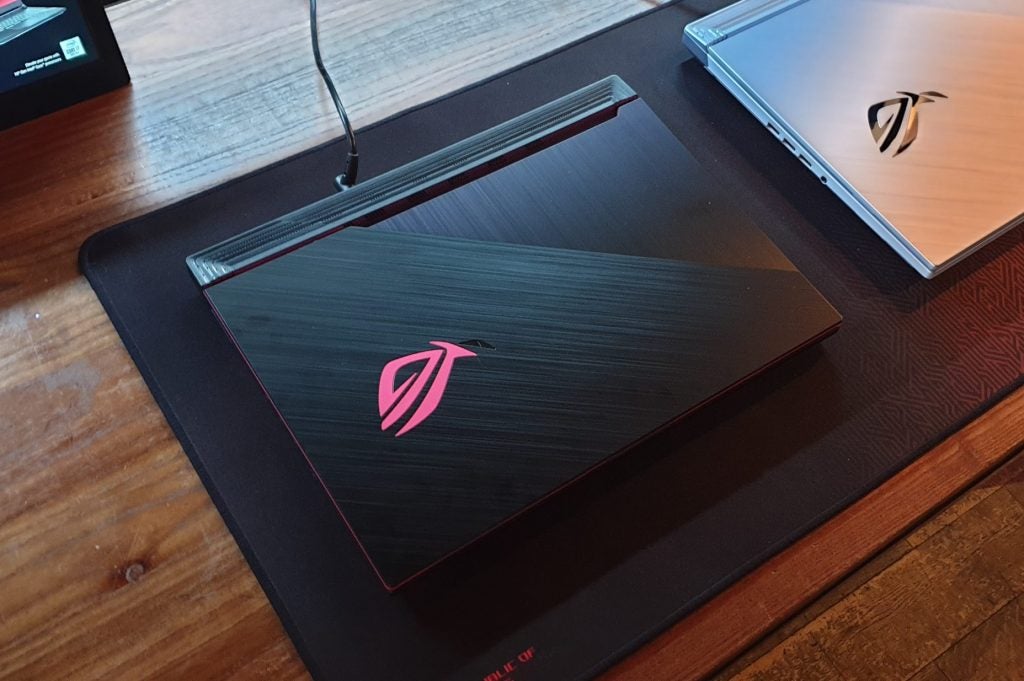 We wouldn’t recommend you buy anything before we’ve had a chance to test it properly ourselves. The spec sheet is undoubtedly impressive but we’ll need to put the Asus ROG Strix G15 through some benchmark tests before we get an idea of how powerful this gaming laptop is.

That said, early impressions are always important and I’m very impressed with what I’ve seen so far. I’m really digging the Electro Punk design, with the pink highlights helping it stand out from the hordes of competing gaming laptops. I can see some people criticising it for being overly garish, especially with the flashing light bar around the edge, but that comes down to personal preference.

With a relatively affordable starting price and some of the latest and greatest components available, I can see the Strix G15 being a great option for gaming on the go in 2020. Stay tuned to Trusted Reviews in the coming months for our final review.