The Razer Blade 15 (2021) isn’t the most exciting gaming laptop to arrive this year, featuring a near-identical design to its predecessors. This makes it a hard sell to anyone who’s upgraded their mobile gaming rig in the past year or two. But under the hood, there’s no denying it's one of the most powerful gaming notebooks on the market, and a solid option for any player with cash to burn.

The Razer Blade 15 base edition (2021) is the latest powerhouse gaming laptop from one of the biggest names in the business.

It aims to offer the same core experience as the 2020 model we reviewed and recommended in our best gaming laptop guide last year, retaining the same design and many of the same key features. The only major change is that the portable has been upgraded to run Nvidia’s latest 30-series mobile graphics cards.

This makes the new model a bit of a hard sell for anyone who’s bought a top-end gaming laptop in the past couple of years, with its high price in particular making it less alluring to existing Blade owners. But following a solid fortnight testing the device, I can confirm that it remains a great choice, with the new card making it one of the best options for premium buyers looking to enjoy next-generation gaming features such as on-the-go ray tracing lighting. Here’s why.

The Razer Blade 15 base edition is available to buy now on the Razer store and from various other retailers across the world. The devices were unveiled in January just after Nvidia revealed its new line of RTX 30-series laptop graphics cards.

Design and keyboard – It looks like last year’s model

Razer Blade laptops have a reputation of being the best built gaming notebooks around, to the point that some gamers joke that if Apple made a gaming laptop, it would look like a Blade.

And for the past couple of years, that reputation has been upheld with the Blade’s sturdy metal frame and reasonably small-screen bezel – which is less than 4mm wide along the display’s sides – combining to present a laptop that oozes class. I welcome, too, that the laptop’s plain-black chassis is blissfully free of superfluous RGB lights, aside of the solo green Razer logo on their top.

I also appreciate Razer’s decision to retain the position of the webcam at the top of the device, unlike many gaming notebooks and Ultrabooks that have either removed it entirely or positioned it underneath the screen, giving video callers a lovely view of your nostrils.

As a person currently working and gaming from home, I’m also thankful that Razer has chosen to load the Blade 15 with all the ports you’d need to easily connect it to an external monitor, keyboard and mouse, including 1x Thunderbolt 3 (USB-C), 1 x USB-C 3.2 Gen 2, 3x USB 3.2 Gen 2 (USB-A) and Gigabit Ethernet. You also get a HDMI port, which can push 4K at up to 120Hz. 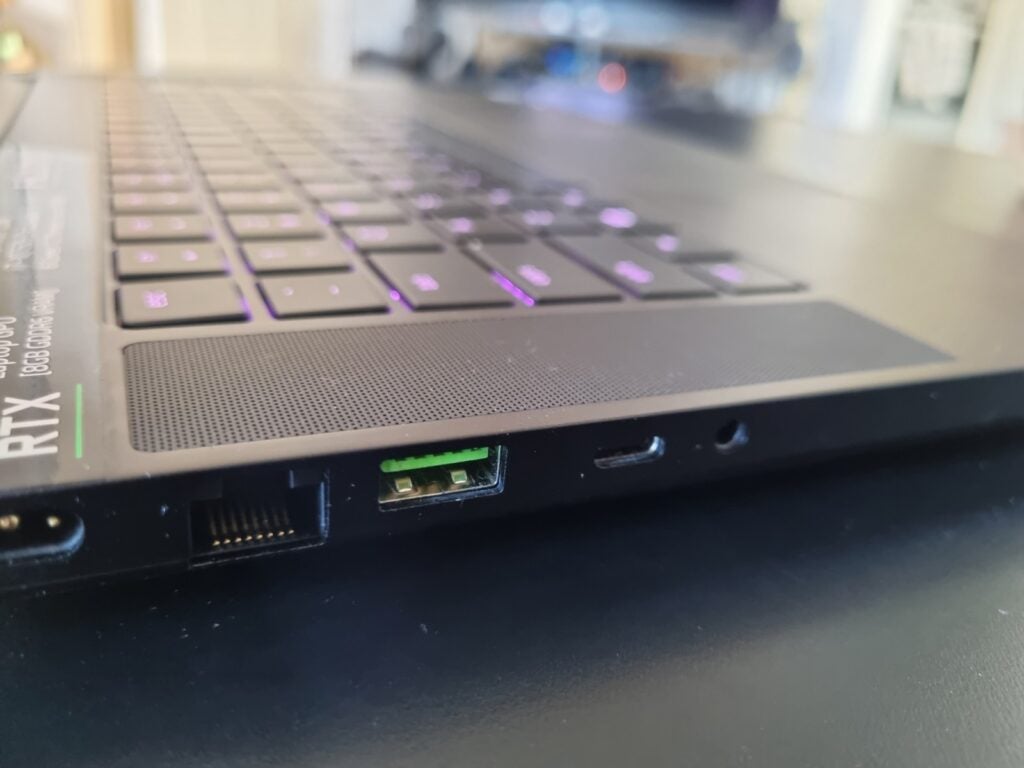 However, the Razer Blade 15’s clamshell design is beginning to feel a little stale. On lifting it out of the box, I was also disappointed to find that the company still hasn’t addressed some key issues we’ve reported over the years.

First the positives. The Blade 15’s metal chassis is wonderfully premium feeling and well built, to the point there’s no flex when pressed extremely hard. There’s no give to the keyboard either, even when met with heavy typing during heated game sessions which is a key problem I’ve experienced when testing laptops with plastic designs from the likes of Gigabyte and MSI.

But the black finish is a magnet for smudges and is easily scratched too. Just taking it out of the box, the top of the laptop looked like it had been dusted for prints. Filming it for a video was a nightmare, with the device collecting smudges and dust at an almost supernatural rate. I had to use a whole can of compressed air to capture a five-minute unboxing – and even then it didn’t look pristine.

Note, too, that I’m still not completely sold on the Razer’s keyboard. Three years ago, the Razer Blade 15’s keyboard was one of the best around, featuring anti-ghosting and programmable RGB lighting. But last year, Razer switched things up with mixed success. Specifically, it squished down the size of some keys, such as the arrow inputs, to make room for the side-facing speakers and minor hardware changes. 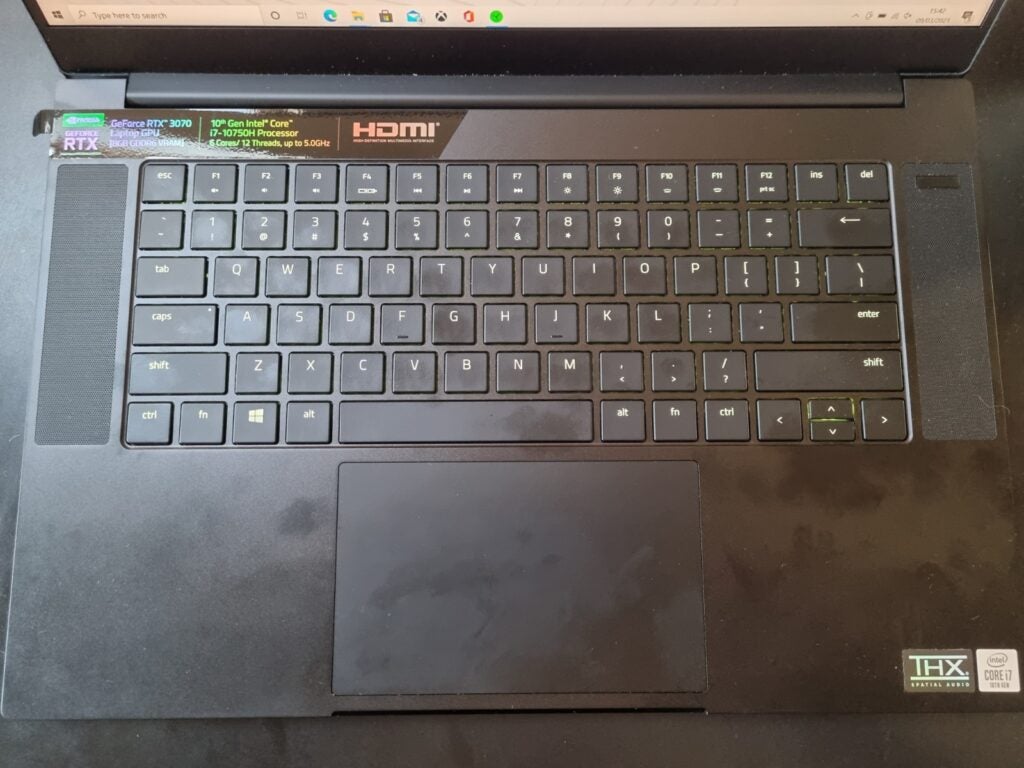 The two giant speakers lining the sides make the keyboard feel smaller, which is sad since there remains a lot of bare real estate around the trackpad and other parts of the laptop. The quality of the speakers themselves partially make up for this – they’re THX certified, offering fantastic sound quality for a laptop.

During testing I’m yet to find a more immersive audio experience on a gaming laptop, with the speakers here presenting noticeably more dynamism and detail than the competition when playing key titles such as Call of Duty and Destiny 2. But I still can’t help but think Razer could have made some improvements in the last year.

The keyboard remains comfortable enough to type and game on. But the switches aren’t the best on the market. With more and more gaming laptop manufacturers opting for mechanical switches, I find it odd that Razer is yet to do so, despite making some of the best gaming keyboards around and has opto-mechanical switches ready made.

Thankfully, Razer has made some changes to the 2021 base model’s screen, loading it with higher refresh rate panels and introducing a new Quad HD resolution option.

Viewing angles aren’t the widest I’ve experienced, with colours distorting quickly if you view the screen at anything but head-on. But considering the Blade 15’s gaming focus, this is hardly a deal-breaker. It just means the screen isn’t great for watching Netflix with more than one person.

The 165Hz refresh rate is also a key spec that will catch technical gamers’ eyes. A refresh rate refers to how many images per second a screen displays. A higher figure is particularly beneficial to gamers as, by rendering more images per second, animations are more fluid. In certain games it can also deliver a competitive advantage, ensuring less of a delay between you clicking a button and the command being enacted on-screen. 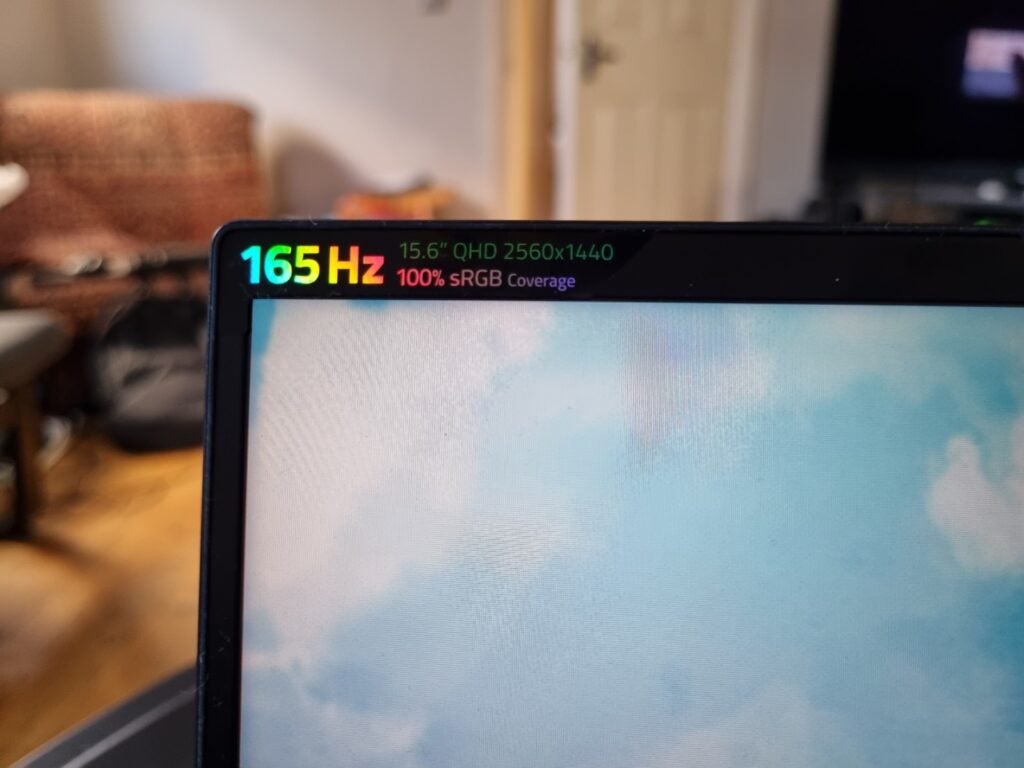 A few years ago, seeing a 120Hz – let alone 165Hz – screen on a gaming notebook would have been atypical. However, these days refresh rate seems to be the battleground of choice among gaming laptop and monitor manufacturers. The likes of MSI is actually pushing out notebooks with 240Hz panels right now. But, truthfully, the 165Hz rate is plenty. Even with one of the best GPUs around, there are very few AAA games that will run this fast with their graphical settings maxed out.

Cracking out my trusty colorimeter, a tool used to measure screen performance, the results of testing generally matched my real-world experience with the Blade 15 base edition.

The 6432K colour temperature I detected is just a little warmer than the 6500k ideal. Colour gamut coverage is also impressive, especially when you consider the laptop’s gaming focus. Running it through our suite of tests, the laptop proved capable of covering 99.7% of the sRGB colour gamut.

More impressively, I found it could cover 81.3% of the Adobe RGB and 96.7% of the DCI-P3 gamuts. These are wider gamuts generally used by creative professionals working in design, photography or film. Coverage of both is a key factor that helps to ensure the on-screen colours you see are accurate, and closely match how they’d look if professionally printed or displayed in physical media. 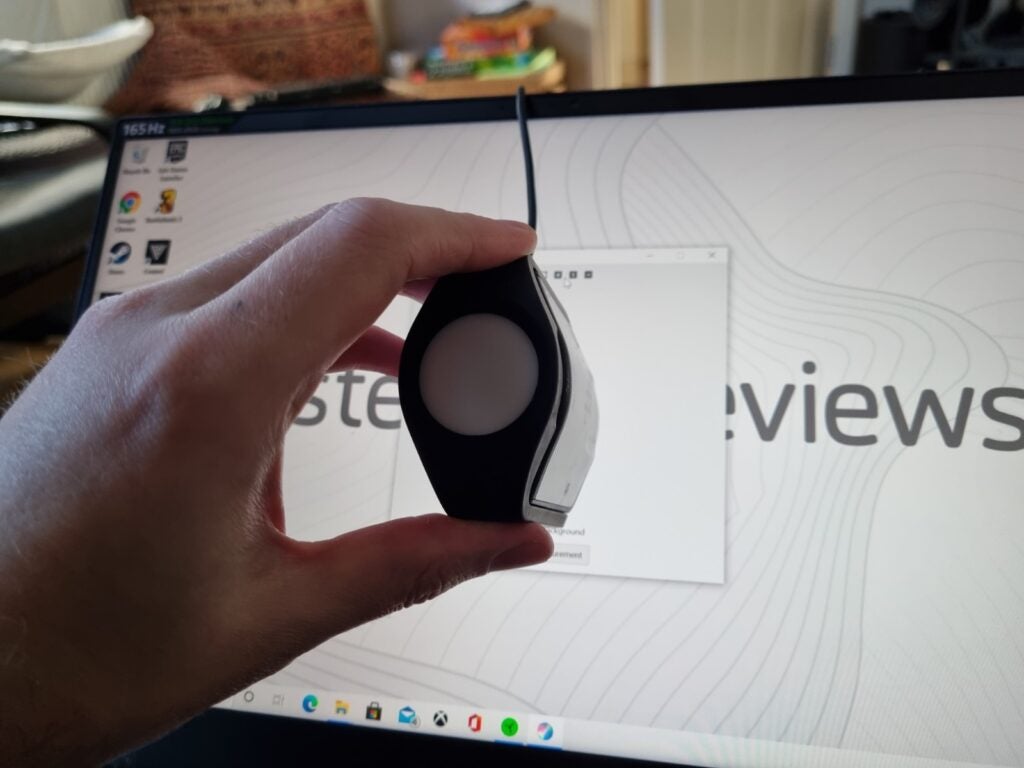 The only minor downside is that peak brightness levels was slightly lower than last year’s model, scoring 315 bits which is just slightly higher than average. A nit is a metric used to measure brightness. One nit is representative, roughly, of a single candle’s brightness. The screen also displayed a solid 0.3-nit black level, which is great for a non-OLED screen, but slightly lower than expected, which indicated the laptop could struggle to give dark and shadowy scenes justice.

These figures result in a 1011:1 contrast ratio, which again, is fine. You can find gaming laptops with a superior contrast, which helps to make on-screen images more vivid. But while the Razer Blade 15 screen is arguably not best in class, it’s still fantastic to look at.

The Razer Blade 15 2021’s primary selling point is its use of Nvidia’s new RTX 30-series graphics cards. For those not in the loop, the RTX 30-series is Nvidia’s latest flagship line of GPUs. They debuted last year as desktop cards, aiming to offer radically faster ray tracing and general performance than the previous generation RTX 20-series.

The Razer Blade’s Nvidia RTX 3070 GPU matched my experience with the desktop version of the RTX 3070 in most areas, proving capable of playing nearly every game I threw at it with its settings maxed. Post-60fps is considered by most gamers to be the baseline at which you want any competitive game to play, and the Razer achieved this comfortably. 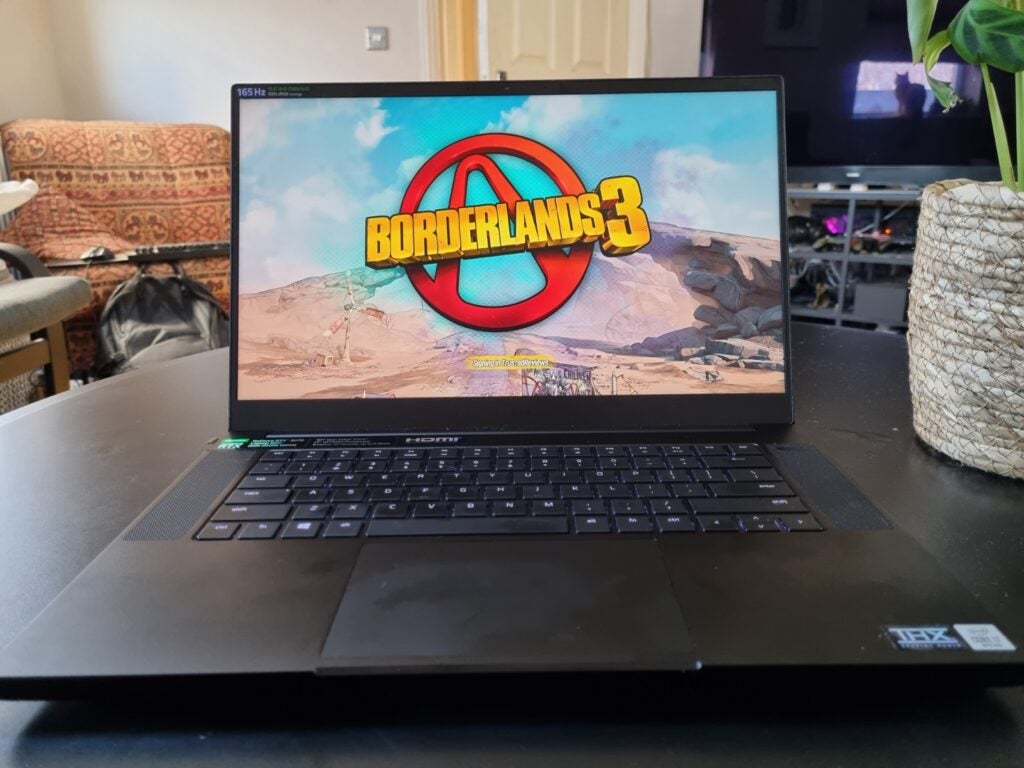 With ray tracing on, things go a little lower, even if you turn on DLSS. Control ran at an average of around 50-55 fps in 1440p when both ray tracing and DLSS were activated, although during particularly intense scenes it could drop to below 40fps. DLSS is a clever AI technology developed by Nvidia that aims to help reduce the workload on a GPU when doing demanding tasks by using clever upscaling technology.

Connecting a Wacom Intuos graphics tablet, I found the laptop also performed reasonably well when tasked with creative work. I was able to use it for big digital painting projects, some vector work and basic 3D modelling without any issues.

Running the Blade 15 base edition through Trusted Reviews’ standard suite of benchmarks, the laptop’s performance matched my real-world experience.

You can see a breakdown detailing its Geekbench 5, PCMark 10, 3DMark and Crystal Mark scores, and how they compare to a competing laptop we’ve tested recently. In all tests a higher score is better.

Gaming notebooks aren’t known for offering long battery lives. If that’s your priority, then you should be looking at a regular Windows ultrabook or MacBook Air M1, which sacrifice graphical grunt for improved battery life. With this in mind, there should be no surprise over the Blade 15’s results in our battery life tests.

Using the laptop as my regular work machine during the day, I generally made it half way through the 9-to-5 slog before needing to reach for the power outlet. This was with the screen set to 150 nits (just below 50% brightness).

I decided to push my luck with an hour’s gaming at lunch, things went downhill fast: I lost 30% of my charge in as many minutes. In short, the Blade 15 (2021) won’t last a long train ride, let alone a long-haul flight without external battery packs or a top-up charge in a coffee shop. 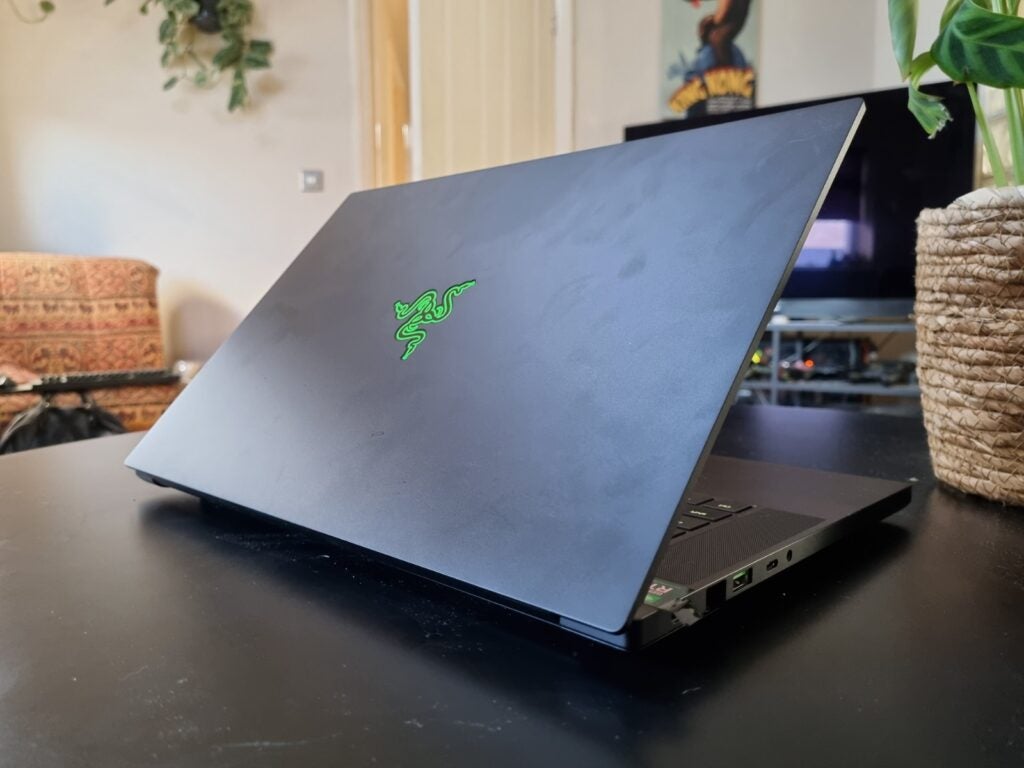 The Razer Blade 15 base edition is an iterative update to what was once the undisputed best gaming laptop.

It doesn’t fix the niggling design issues we’ve highlighted since Razer debuted the clamshell design, but it gets enough right to retain a spot in our best gaming laptop guide thanks to the upgrade to Nvidia’s new 30-series of GPUs.

You should buy the Razer Blade 15 base edition if:

You shouldn’t buy the Razer Blade 15 base edition if: