The Asus Crosshair VII Hero is one of the priciest boards we've seen, but it justifies the cost by offering superb design and a wealth of features. It's only a little way ahead of rivals in benchmarking, so only shell out for this if you insist on having the best performance.

What is the Asus ROG Crosshair VII Hero (Wi-Fi)?

When you buy an Asus ROG product, you’re expecting a device that’s packed with gaming features – and the Crosshair VII Hero doesn’t disappoint.

It’s loaded with enthusiast-level gear, and has the connectivity to support powerful rigs. With a price of £260, though, it will have to work hard to tempt you into opening your wallet – and to go one better than the Gigabyte X470 Aorus Gaming 7 WiFi, which is £20 cheaper. 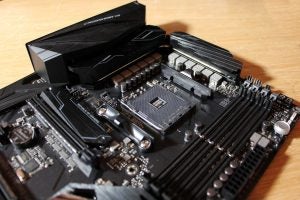 The Crosshair VII Hero certainly looks the part. The left-hand side of the board is dominated by metallic heatsinks, and more metal is used to cover the rear I/O and to protect the audio circuits. There’s a chunky metal heatsink on the right, and the board itself is a black slab of PCB that’s decorated with smart patterns.

There are the usual RGB LEDs in the two main heatsinks, but this board is a lot more sedate than the Gigabyte offering. That board features orange accents all across its heatsinks, and more lighting too.

Enthusiast features are scattered around the Crosshair’s periphery. In the top-right corner, there are power and reset buttons plus a two-character POST display for diagnosing problems. Along the bottom there are buttons for safe booting, retrying the system settings during overclocking, and for loading the system in a slow mode.

It’s a similar enthusiast lineup to the rival Gigabyte product, which also has a POST display and options for switching between two BIOSes. However, the Gigabyte model doesn’t have power or reset buttons.

The Crosshair’s more conventional specification is high-end, too. With a second-generation Ryzen processor installed, the Asus board supports 64GB of 3600MHz memory in four slots, which matches the speed offered by the Gigabyte. It will handle two graphics cards, thanks to a second steel-bolstered PCI-E slot that runs at 8x speed, and elsewhere there’s a PCI-E x16 slot running at x4 speed – but only two PCI-E x1 sockets.

Storage is catered for by two M.2 sockets – just like the Gigabyte – and you get the usual gamut of SATA ports. In addition, there are two RGB LED headers, two connectors for Asus AURA light strips, and ten connectors for various combinations of fans, pumps and water coolers.

Gigabyte’s board has the same memory configuration, and the same PCI slot configuration. It also has two M.2 connectors and plenty of SATA support. Both boards have 802.11ac wireless, too. Specs-wise, they’re similar – the Gigabyte only falls down by missing out on beefed-up audio and game-friendly networking.

At the rear, the Asus serves up a mighty nine full-sized USB 3.1 ports alongside a Type-C connector. In addition, there are five audio jacks, a PS/2 connector and buttons to clear the CMOS and reload the BIOS – all handy features. The Gigabyte is a couple of USB ports down, but that’s the only difference here.

Asus is generous with its accessories. You get a smart wireless dongle, an Nvidia high-bandwidth SLI bridge, a sheet of stickers and a coaster.

There’s no doubt that the Crosshair ticks most of the boxes when it comes to features, but it wasn’t able to consistently outpace the Gigabyte in benchmarking.

The Asus board returned a minimum of 61.4fps in Middle-earth: Shadow of Mordor, but that was actually one of the worst results in the group – and the Gigabyte was around two frames faster. The Asus’ average frame rate here of 92.92fps was better, but only half a frame quicker than the Aorus. In Rise of the Tomb Raider, the Crosshair led over its rival – but its 73.79fps average was less than two frames faster.

The Asus board gained a slim advance in theoretical tests. It rattled through 3D Mark: Time Spy and Fire Strike with scores of 4137 and 10,997 – some of the best results in this entire test, and marginally quicker than its main rival.

The Crosshair was marginally quicker in application benchmarks, too. Its Geekbench results of 4807 and 22,137 were a handful of points faster than the Gigabyte board. They were some of the best results I recorded anywhere in this batch – only the MSI X470 Gaming Pro Carbon was faster.

The Asus was marginally quicker than the Gigabyte in Sandra’s processor arithmetic test, and it also took a narrow lead in the NVMe storage benchmark. It fell behind in two of the memory bandwidth tests, but never by a wide distance.

The Crosshair was a little quicker than the Gigabyte in most tests, then, and it also proved a little faster than almost everything else in the group. This is no surprise considering the price. However, it was also one of the most power-hungry boards here, with an idle draw of 67W.

The Asus ROG Crosshair VII Hero is packed with features and regularly beats every rival when it comes to benchmarks, but it remains a very expensive board. It’s only worth investing if you’re a true enthusiast.

A lot of the features will only be appreciated by overclockers and tinkerers, and the performance gains this board delivers aren’t vast. The Gigabyte board – and plenty of other models – will deliver the same basic specification without the high-end features or the high price.

If you do intend to use the myriad features this board offers – and want great performance, too – then take the hit. Just be aware that you could save a lot of money by giving up the niche extras, and only a slight improvement in benchmarking ability.

The Asus Crosshair VII Hero is the priciest board in this group, and it justifies the cost with superb design and plenty of features. Performance-wise, there are only slight gains to be had over rivals in benchmarking, so only shell out if you insist on having the best performance – and if you’ll be using every feature included.