The Aorus Gaming 7 has plenty of high-end features and a good basic specification, and it’s festooned with lighting options. It isn't as fast as the Asus ROG Crosshair VII, though.

What is the Gigabyte X470 Aorus Gaming 7 WiFi?

The Gigabyte X470 Aorus Gaming 7 WiFi gaming motherboard is one of the most expensive new AMD-based models out there. At £240 it’s only £20 cheaper than the table-topping Asus Crosshair VII Hero.

It’s a lot to spend on a motherboard, though, so can it justify the price and keep up with its more expensive competition? 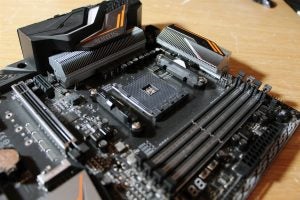 The Aorus Gaming 7 WiFi is one of the brightest and most eye-catching boards on the market. The rear I/O, CPU surround and bottom chipset are covered by large heatsinks, finished in multiple tones and with orange highlights.

Note too, that this board is covered with RGB LEDs. They can be found in the main heatsinks, and in the plastic that’s used to shield the audio circuitry. The top two PCI-E x16 slots are surrounded with lights, and bars of RGB LEDs are sandwiched between the four memory slots. There’s even a band of patterned plastic featuring even more lighting on the right-hand side of the board.

The board pairs its outrageous looks with numerous enthusiast features. At the top-right corner is a button to automatically overclock the CPU. Along the memory slots you’ll find a POST display and buttons to flick between two BIOSes. Those BIOS switches are good, but the Gigabyte doesn’t have on-board power and reset buttons such as the Asus. I’m also not keen on the sideways POST display – it just makes the characters trickier to read.

Get beyond the lights and the high-end features and the Gigabyte ticks all of the more conventional boxes. Its four memory slots support 64GB of 3,600MHz memory – just like the Asus Crosshair VII Hero – and its top two support dual graphics. There’s a third PCI-E x16 slot at the slower x4 speed. Like the Asus, there are two PCI-E x1 sockets too. 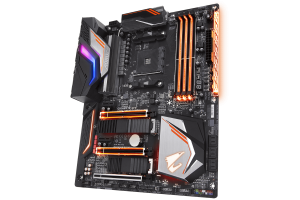 You get the conventional two M.2 connectors – both have heatsinks, unlike the pricier Asus – alongside six SATA connectors.

The Gigabyte has wireless internet, and both boards use the same ALC1220 audio codec. Gigabyte’s Gigabit Ethernet isn’t quite as beefy as the GamingFirst networking on the Asus, but that won’t make a difference to most people.

The backplate has seven USB 3.1 ports, which is plenty (but two fewer than the Asus), alongside a Type-C port. Elsewhere, there are five audio jacks, a Clear CMOS button and a power button, but no BIOS reset option.

Gigabyte’s board does have one extra on-board USB 3 header when compared to the Asus, and you’ve got eight fan and water-cooling connectors, which is fewer than the Asus, but still plenty.

Aside from that, you get seven different connectors for adding LED strips and RGB lighting, making it better-equipped in this regard than the Asus. 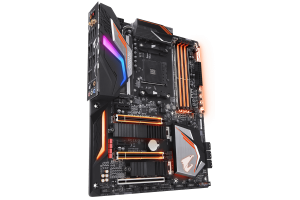 The Aorus board is £20 cheaper than the Asus model, and that translates to a marginal gap between the two in gaming benchmarks.

In the 3DMark: Time Spy and Fire Strike tests, the Gigabyte scored 4136 and 10,973 points with the Asus a couple of points faster in both benchmarks. In Middle-earth: Shadow of Mordor, the Gigabyte’s minimum frame rate was a little better but its average was slightly behind the Asus. In Rise of the Tomb Raider it was a couple of frames behind.

Taken in wider context, though, the X470 Aorus is a good performer. Those 3DMark scores are better than the majority of boards in this latest test group, and its real-world gaming results are solid.

It’s decent in CPU benchmarks too. Its Geekbench results were barely behind the Asus but still competitive with everything else here. A Cinebench score of 1405cb matches the Asus and is one of the best in the wider group.

The Gigabyte’s SSD and SATA scores are towards the top of our results tables, and it competed with the Asus in memory bandwidth. It also consumed a little less power than the Asus board.

The Gigabyte X470 Aorus Gaming 7 WiFi doesn’t match the rival Asus board for pure performance, but it’s still one of the faster motherboards on the market – and it makes up for its marginal lack of speed in other departments. 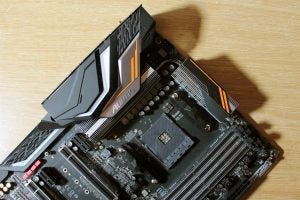 It has virtually identical core features to the Asus, and both boards offer plenty of enthusiast kit. The Gigabyte board goes further with its lighting options, and it’s £20 cheaper than the Crosshair.

As ever, this is still an expensive board, so only invest if you’re sure that you’ll make use of all the features. Or, if you want to build a system that’s littered with RGB LEDs, then this is the best high-end option available.

The Aorus Gaming 7 has plenty of high-end features and a good basic specification, and it’s brimming with lighting options. It’s a decent buy only if you’ll use all the features on offer, though.