The Asus N53SV is a 15.6in laptop suitable for use as a desktop replacement. With a Sandy Bridge Core i5 processor and dedicated graphics chip, to get equivalent performance from an Apple Macbook you’d have to spend over a grand. However, the Asus N53SV costs around £700. It’s a mid-range lappy, but these days that spells a great deal of power.

This laptop’s frame isn’t new, having been used in the N53JN for one. What is new is what’s inside. It offers the latest-generation chipset – our review model rocked an i5-2410M 2.3GHz processor and 6GB of DDR3 RAM. This should help push up the power without compromising battery life too much.

The Asus N53SV cuts an imposing figure. The brushed dark grey and black interior is serious-looking, but there’s enough elegance to temper this seriousness with style. A brushed metal layer sits atop the keyboard rest, to supply a classy cool-touch element. The rest of the interior is plastic, but its lines have been laid-down carefully enough to cast this as a quality laptop.

A row of shortcut buttons sits above the keyboard, embedded within a crystal-like line of clear plastic. They offer media and volume controls and the two power buttons – one to load Windows 7, the other Asus’s Express Gate interface. Too often these shortcut buttons stand out a little too eagerly, but here they’re blessedly low-key. The speaker housing above these buttons isn’t quite as timid though. It’s shiny, rather large and styled as a perforated grille across 90 percent of the laptop’s width. This isn’t a laptop we’d accuse of macho posturing, but it’s edging towards that territory here.

Along with the latest Sandy Bridge processor, the Asus N53S also benefits from USB 3.0 connectivity. There’s just a single USB 3.0 socket on the laptop’s left edge, to complement the three USB 2 slots. Alongside the USB 3.0 port are one of its slower USB 2.0 brothers, the HDMI output, Gigabit Ethernet port and the memory card reader. On the right edge are two of the three USB 2 ports, the headphone/mic sockets, Wi-Fi switch and tray-loading Blu-ray drive.

The back houses just two additional elements, the VGA output (for older displays) and the power socket. Internally there’s Wi-Fi and Bluetooth 2.1.

The Asus N53S’s keyboard doesn’t follow in the footsteps of the current trend for chiclet-style keyboards. Instead, there’s just a 1-2mm gap between each key, allowing each to be of a fairly decent size. The numerical keypad’s buttons are a little smaller, but this feels like a fair compromise when it results in a spaceous main keyboard area.

The key action is a little bouncy, but it’s definite enough to avoid that imprecise spongy feel of some laptop keyboards. The large-sized keys and decent action make the Asus N53S very comfortable to type away on – its keyboard doesn’t lead the class though, trumped by the likes of the Lenovo Thinkpad Edge 15.

It’s a similar tale with the display. The laptop uses a 1366×768 pixel panel of the TN (twisted nematic) type. Although the standard setup for laptops of this level, performance is fairly uninspiring. Horizontal viewing angles are acceptable, but there’s significant contrast shift when viewed from a less-than-optimal vertical angle. The backlight is fairly consistent but cast a blue hue at angles. To top it off, contrast is unimpressive. The experience of viewing Blu-rays and playing games on the N53SV isn’t much cop unless you sit just in the right position. The screen has a reflective glossy finish, so you’ll need to pump up the screen brightness right up if you want to venture outside with the laptop – and even then you won’t have much fun. 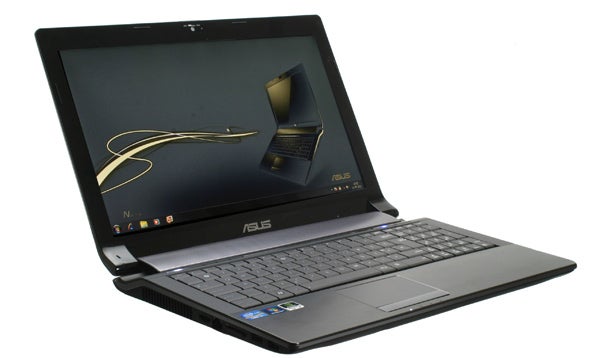 To get the bump up to a full 1080p screen, you’ll usually have to spend a little more cash though – on something like the Sony Vaio VPCEB4X0E, which has its own share of other issues surrounding poor battery life, or Dell XPS 15z.

The trackpad uses a brushed finish, offering an extra bit of texture to give your finger a very smooth ride across its surface. A single shiny metallic strip below accommodates the two mouse buttons – a design that won’t appeal to all, but is in keeping with the N53SV’s simple lines.

One of the Asus N53S’s stand-out design elements is the speaker grille that sits just below the screen. This houses the Bang & Olufsen IcePower speakers. Bang & Olufsen is a big name in hi-fi terms, but one as famous for its high prices and unusual designs as sound quality. 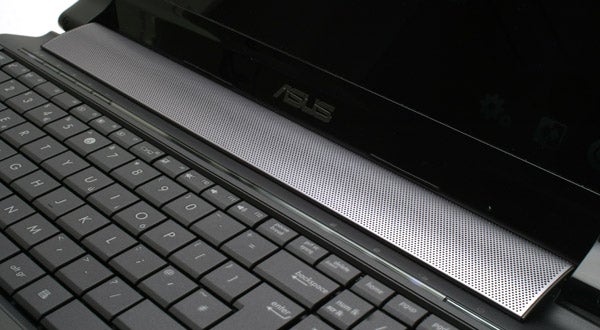 Putting a name like this remains a marketing ploy that may skew some expectations – they’re still tiny little laptop speakers after all – but sound quality is far above average here. There’s some semblance of bass, and while the drivers start to show the strain at top volume, the scale of sound benefits significantly from the extra attention the built-in speakers have been given. For the casual bit of music-listening, or watching a TV episode in your bedroom, the Asus N53S is more than up to the task. For anything more substantial though, we’d still recommend hooking-up some external speakers.

As a desktop replacement-style laptop, performance is of utmost importance with the Asus N53SV. Thankfully, with a dedicated graphics chip and the Sandy Bridge Core i5 processor running the show, it comes up with the goods.

In our PCMark productivity tests, it managed a respectable 6238 points. The 5400rpm hard drive isn’t hugely quick, but the Asus N53SV will be able to cope with the vast majority of productivity and media tasks you could throw at it – including favourites like decoding 1080p video. 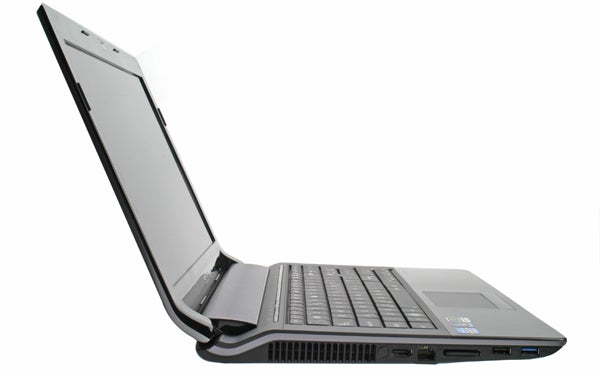 Something that has added a significantly chunk of change to its £699 price is the 1GB GeForce GT540M graphics card. This mid-range card performs well with older games, and will handle new games at middling or lower settings. In our most challenging Crysis test, it didn’t produce enjoyable frame rates at a sub-native resolution of 1,280 x 720, supplying 21.8 frames per second (fps) on high detail settings. Slipping down to medium settings though rendered a perfectly playable 36.7fps average. 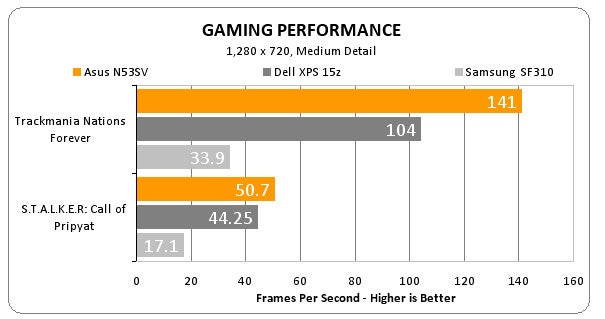 Predictably, it also performs extremely well in our less intensive S.T.A.L.K.E.R. and Trackmania Nations benchmarks. In the former, it reached an average of 50.65fps and a rather ridiculous 141fps in the less-intensive Trackmania. The Asus N53SV isn’t quite powerful enough to satisfy the most hardcore of gamers but for the rest of us, it’ll do the job admirably.

For such a large laptop the Asus N53SV has decent battery life, lasting for four hours and 20 minutes in our productivity test. It won’t manage that long when playing Crysis of course, but for typing documents and so on you’ll be able to stay away from the power plug for the best part of a working day.

At 2.7kg, it’s a little too heavy to comfortably carry around with you all day long, but this is otherwise a very versatile, feature-complete laptop. A higher-quality screen would have been a bonus, but with a built-in Blu-ray player, decent build quality, good speakers and strong overall performance, the Asus N53SV is an excellent all-rounder.

Can you get more for your money elsewhere though? The Dell XPS 15 doesn’t quite have the gaming performance, a Blu-ray drive or as much RAM when configured to the same price, and it’s a similar tale with the Samsung SF310 – which has a lesser graphics card and no Blu-ray player. Stacking up the Asus N53SV’s features up against its asking price, it’s hard not to be at least a little impressed.

A versatile machine that handles gaming, multimedia and productivity tasks equally well, the Asus N53SV offers excellent value and decent build quality. Its looks err on the serious side a bit more than is strictly necessary, but its design remains cohesive resulting in a good-looking laptop. The screen’s nothing special, but the rest of what’s on show makes this mid-range laptop a highly attractive buy. 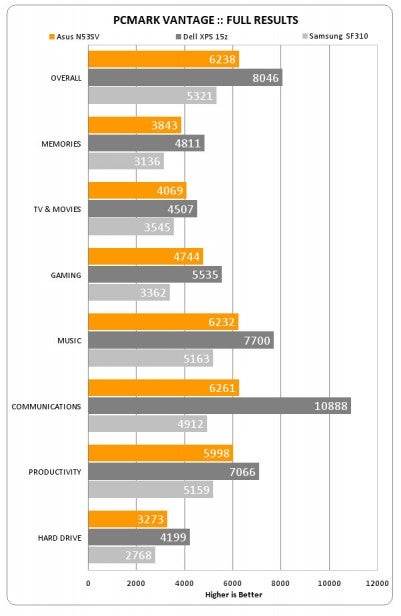