Getting outside help to improve laptop audio isn’t a new idea; Toshiba has enlisted Harman/Kardon’s help on several occasions and Altec Lansing has added its weight to many a laptop over the years. Asus, however, is the first to our knowledge to enlist the help of Bang & Olufsen, and the Asus N53JN is the first fruit of their combined labour. 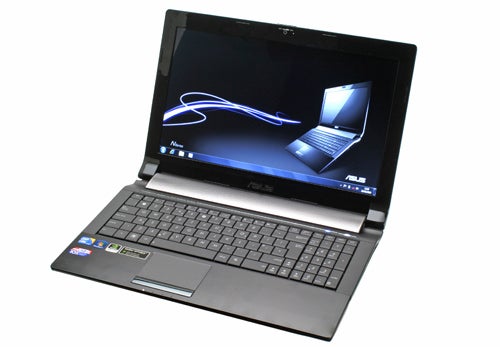 As reported recently, the N53JN is the smaller of two Bang & Olufsen ICEpower laptops – the other being the 17.3-inch N73JN. There’s more to the machine than just its purported audio prowess, however, as the 15.6-inch machine also features a USB 3.0 port, Blu-ray and Nvidia’s Optimus graphics switching technology. You could say it’s a flagship laptop for Asus, a point reflected in the near £1,000 asking price.


Asus has lavished some attention to the design, too. Clad in brushed metal inside and out, the N53JN has a classy, imposing appearance that’s enhanced by some dramatic curves around the hinges. And, wedged between the two hinges, is the enlarged speaker system of which Asus promises so much. Considering its relative size it’s a surprisingly unobtrusive addition to the machine, a fact helped by the attractive metal grille. 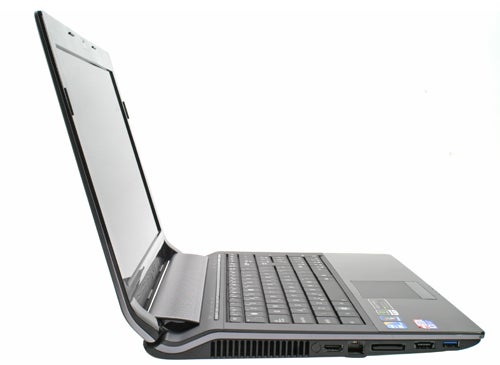 Inside the N53JN doesn’t want for processing power. A 2.4GHz Intel Core i5 processor handles the day-to-day, supported by a 3MB Cache, 4GB of DDR3 RAM. Meanwhile graphics switches between a 1GB Nvidia GeForce 335M for the intensive work and Intel’s power-efficient integrated graphics. For storage there’s a 5,400rpm, 500GB hard drive. Throw in the Blu-ray player, the aforementioned audio enhancements, and a generous two-year warranty, and the N53JN represents decent value and lacks for little.


Much the same can be said for the connectivity. On the wireless side of things you get 802.11n Wi-Fi and Bluetooth 2.1 – not 3.0 as seen in a few laptops and mobile phones of late. Also included is Gigabit Ethernet, and of course there’s the ultra-fast USB 3.0 port – more on which you can read in our USB 3.0 guide. It’s joined by three USB 2.0 ports, one of which doubles as an eSATA, giving you plenty of choice for your external devices.

Video connectivity is standard, with both VGA and HDMI on show, and there are just the two audio jacks – one for headphones, one for an external microphone. Unusually the memory card reader is placed on the left edge, which you may find an inconvenient change, and similarly the hardware wireless radio switch is tucked right away at the far end of the right edge. For the paranoid among you, Asus has added a plastic cover for the integrated webcam so people can’t spy on you. Okay…

In general the build quality of the N53JN is excellent, a fact helped by the liberal portions of brushed metal. At 2.73kg it’s not outrageously heavy, but it’s not exactly portable either. Even under reasonable load the N53JN remains relatively cool and quiet, which is a nice quality to have if watching a film at night.

While the build quality is very good, we’re still not sure we like the keyboard despite much testing and discussion. Its layout is fine, and the keys are a comfortable size for prolonged typing, but the key actions are just a little on the fuzzy side and there’s some noticeable flex. Most people will probably get on okay with it, but the N53JN isn’t in the same class as the Dell Inspiron 17R in this respect. 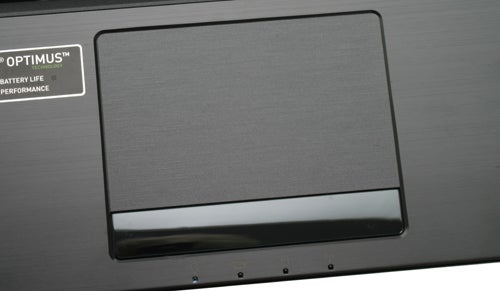 There’s little to say about the touchpad. It has multi-touch support, which works fine, and the faux-chrome rocker switch offers decent feedback. It’s also positioned off-centre, so rarely interferes with typing – a problem we’ve been seeing all too often of late.


Considering the price, the presence of a Blu-ray player, and the much touted B&A ICEpower audio, the N53JN ought to be a very good multimedia machine. Things get off to any inauspicious start though, as the 15.6-inch display does little to inspire. For starters its low 1,366 x 768 resolution is a tad disappointing, but we’d happily overlook such a fault were it not for the equally mediocre viewing angles. 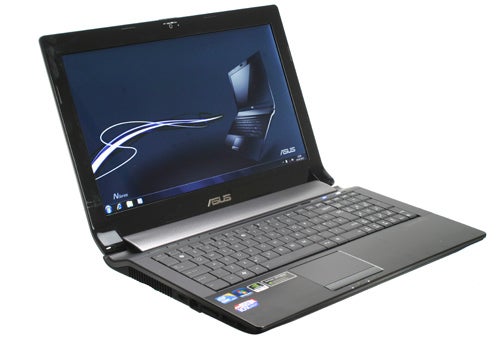 More vitally, the colour gamut isn’t especially wide – yellows in particular look pallid – and the amount of fine detail reproduced is merely average. If you look closely there’s also a slightly mottled quality to the panel, and the bottom edge of the panel is slightly brighter than the rest – a defect particularly noticeable if watching a film in dim conditions. For a £1,000, Blu-ray equipped machine it’s a poor effort.


In stark contrast, the audio performance definitely lives up to its billing. Feed the Bang & Olufson ICEpower speakers decent quality music or film audio and they do a fine job, bringing out plenty of detail and creating a convincing sound stage. Particularly impressive are the astronomic volumes achieved without obvious distortion.

There’s also SonicMaster processing on hand, which comprises a Voice Clarity mode and adaptive volume equalisation. This does a good job of adding some dynamism to films, but tends to make music sound over processed. These speakers are good enough without it, though, so you needn’t use it if you don’t like it.

Little complaint can be made of the of the N53JN’s performance. It’s not quite a powerhouse, but it will cope more than adequately with most of what normal computing life will throw at it. It has genuine desktop replacement levels of power, and will make short work of multitasking, video editing and other CPU intensive tasks. On the whole it performs comparably to the likes of the Acer Aspire 5942G and Samsung R780.

Such performance includes a modicum of gaming ability. The Asus handled our TrackMania Nations test with ease, and even posted playable rates in the more demanding STALKER: Call of Pripyat benchmark. It doesn’t have the grunt to move beyond medium detail settings in most games, and anti-aliasing will be a rare treat, but it does a solid job.

By dint of Nvidia’s Optimus technology, which allows the N53JN to switch seamlessly between its more powerful Nvidia chipset and Intel’s HD Graphics, the N53JN has better than average battery life for its size. In the productivity segment, for example, it lasted 226 minutes – over three and half hours. This beats the Acer and the Samsung quite comfortably, though you’ll likely get closer to three hours if using Wi-Fi extensively.


Things aren’t quite so emphatic in the DVD playback test, though. Here the N53JN managed a passable 124 minutes, just a shade over two hours. That’s enough for most films, and you could reduce the screen brightness to get an extra half hour or more. Ultimately its weight and size renders this battery life advantage of slender benefit, but the switching ability does account for the cool and quiet nature of the machine as well.


It doesn’t, however, solve our single greatest criticism of the N53Jn: its screen. In every other respect it’s an outstanding multimedia laptop, one that mostly earns its price and the hype attached to its speakers. Unfortunately, given the choice between great integrated audio and a good screen, we’d choose the latter every time. After all, it is relatively easy to improve your speakers – just plug-in external ones, or use headphones – but improving a display is less practical and rather more expensive.


The Bang & Olufsen ICEpower speakers deliver handsomely on their promise, and the N53JN lacks little for performance or features, but a mediocre display is a real let down.