Asus has dropped a bit of a clanger with the model code for the M4A78T-E. The name suggests a fourth generation Socket AM3 AMD Phenom II motherboard with an AMD 780 chipset. In fact the chipset is an AMD 790GX so we would expect this model to be called the M4A79G-E or something. It would be rude to call this model code an error but it is certainly confusing and it means that the M4A78T-E is very similar to the Asus M4A79T Deluxe that we have previously reviewed.


The big difference is that one model uses the 790GX chipset while the other has the 790FX. That may not sound like a huge change but it affects almost every aspect of both motherboards. The dominant feature of the Asus M4A79T Deluxe must surely be the quad PCI Express graphics slots (2×16, 1×16 and 2×8 or 4×8) which allow you to combine your Socket AM3 Phenom II with as many as four ATi Radeon graphics cards.


This is ideal for a couple of niche applications such as PCs with four feeble graphics cards that support a video wall of eight TFTS or desktop super computers that offload a chunk of the workload from the CPU to the GPU but in the main we’re talking about games. 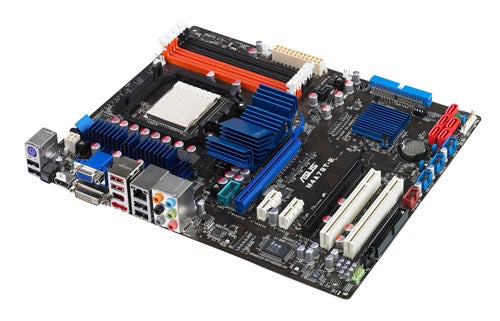 The idea of plugging three or four Radeon HD 4850s into a gaming PC seems like a questionable move as the CrossFireX drivers are bound to cause you problems in certain games. The real killer, however, is the CPU.


Phenom II is a vast improvement over Phenom and Athlon 64 but it struggles against Core 2 and it’s left in the dust by Core i7. If you should happen to want to combine a Phenom II with loads of PCI Express the Asus M4A79T Deluxe is a good place to start but frankly we think it’s the right answer to the wrong question. 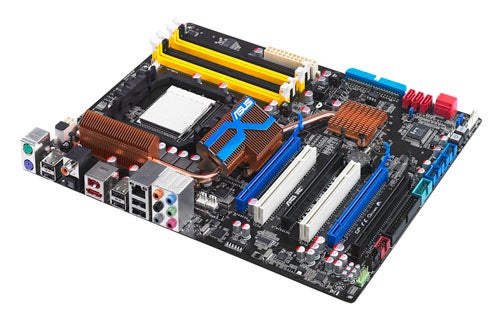 The M4A78T-E is a different proposition as it has dual PCI Express graphics slots (one x16 or dual x8) and it includes Radeon HD 3300 integrated graphics. We’re familiar with this graphics core and have seen it in a number of motherboards such as the MSI DKA790GX but this is the first time we have seen HD 3300 graphics combined with Phenom II and DDR3 memory.


We used a Phenom II X4 810 in our testing and found that we could overclock from the stock speed of 2.6GHz to 3.38GHz, by raising the base clock from 200MHz to 260MHz, when we used integrated graphics and a slightly lower speed of 3.31GHz with a Radeon HD 4870 X2 graphics card installed. That’s in line with our findings with the Asus M4A79T Deluxe and a touch slower than our current overclocking favourite, the Gigabyte GA-MA790FXT-UD5P.

The layout of the M4A78T-E is rather basic but still very functional and it has an incredible feeling of space. The passive coolers on the chipset take up a tiny amount of space, the ATA133 connector is laid down at the edge of the board and the five SATA ports are positioned in one corner where they are a safe distance from the graphics cards slots. The SB750 Southbridge supports a total of six SATA ports and there is an eSATA port on the I/O panel that is also controlled by the Southbridge.


There are other aspects of the layout that we like, such as the power connectors that are at the edge of the board and the headers for additional USB and Firewire ports that are neatly arranged along the foot of the board. This isn’t a Deluxe model so there are no extras such as micro buttons for Power and Reset which is a bit of a shame and there are no brackets in the package so the only ports and connectors are the ones you see on the I/O panel. We have some concern about the six USB 2.0 ports as we prefer to see eight but the headers support up to six case mounted ports so for most people it probably won’t be a problem.

The I/O panel is dominated by the graphics outputs and you get a full selection of VGA, DVI-D and HDMI ports which means that the M4A78T-E caters for both the desktop and Media Centre markets straight out of the box. We know that an AM3 Phenom II has an impressively low power draw but this becomes especially apparent when the graphics card is removed from the equation and you run on integrated graphics. At idle the system draws 55W which rises to 80W under load. Overclock from 2.6GHz to 3.38GHz and the numbers rise to 80W and 110W respectively. When we reviewed the MSI DKA790GX with a Phenom X4 9850 the idle power consumption was 145W at stock speed which rose to 170W under load so the move from AM2+ Phenom to AM3 Phenom II has saved the best part of 100W.


When the system is under load the cooler on the Northbridge gets reasonably hot at 70 degrees however you don’t need to use active cooling. This means that the system is remarkably quiet as a Phenom II CPU is perfectly happy with a slow, quiet fan on the CPU cooler. 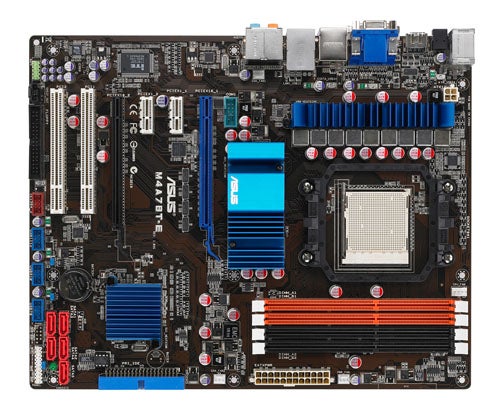 The HD 3300 graphics aren’t really cut out for modern gaming but they are better than you might expect. We were able to play Far Cry v1.32 at 1,024×768 on High Quality settings without any trouble at all but when it came to Far Cry 2 at 1,024×768 we had to reduce the settings to Low Quality on DirectX9. The game didn’t look very pretty but the frame rate was 35fps and that’s rather impressive for integrated graphics.


In the main we were very happy with the M4A78T-E. Add two more USB ports and we would have been ecstatic, so we were pleased to see that the price is very reasonable and undercuts the Asus M4A79T Deluxe by a hefty £50.


The Asus M4A78T-E is a superb match for Phenom II as the integrated graphics do a fine job and you can upgrade to CrossFire with the minimum of hassle.