The Gigabyte GA-MA790FXT-UD5P is the second AM3 motherboard we have seen following on from the Asus M4A79T Deluxe. We were deeply impressed by the way that the Asus overclocked the new Socket AM3 Phenom but as we concluded in the review;

“This is the first AM3 motherboard we have seen in action so we cannot be sure how much of the credit lies with AMD and how much should go to Asus. For the time being it is safest to say that AM3 puts AMD back in the game and Asus has done a fine job.” Hopefully the Gigabyte MA790FXT-UD5P will help us to answer that very question. 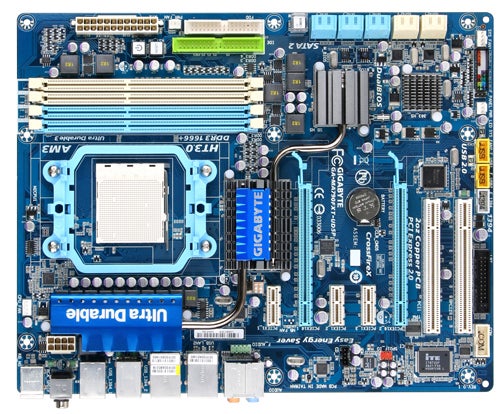 The appearance of the MA790FXT-UD5P is immediately familiar as it looks like a number of Ultra Durable 3 models that we have seen in recent times. For instance the EX58-UD4P Core i7 motherboard uses heatsinks on the chipset with a similar grey and blue colour scheme while the SATA and PCI Express slots and connectors are coloured blue and white. It’s not a complete surprise that the MA790FXT-UD5P and EX58-UD4P look similar as both CPUs contain the memory controller so the relationship between the processor socket, the Northbridge and the memory slots is essentially the same.


The horrendous mouthful of a model code indicates that the chipset on the MA790FXT-UD5P is an AMD 790FX which is allied to an SB750 Southbridge. Gigabyte clearly feels that the SB750 support for six SATA II connectors is inadequate and has added a further four SATA II connectors on a Gigabyte controller which appears to be the usual rebadged JMicron chip. That’s a total of ten SATA connectors which could result in a terrible muddle however all ten are laid down at the edge of the board and are easily accessible even if you have two large graphics cards installed. You can use the supplied bracket to convert two of these internal SATA connectors to eSATA and should have no problem finding a home for the bracket above, between, or below your graphics cards.


The I/O panel has eight USB ports in four widely spaced pairs along with a mini Firewire port, a regular six-pin Firewire, dual Gigabit LAN, a pair of PS/2 ports and a full complement of audio connectors. Full marks there Gigabyte as we cannot find anything to moan about. 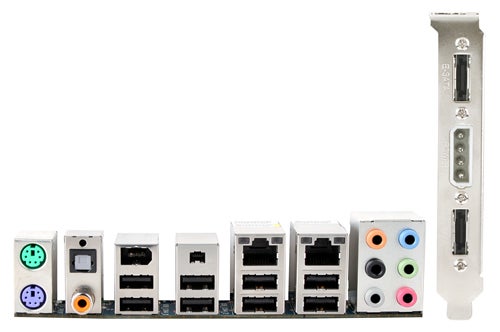 The illuminated power and reset micro buttons have been carefully located next to the main power connector but then we hit a silly problem. The illuminated Clear CMOS button sits just above the SATA connectors and has a clear cover to avoid you accidently pressing the button in error. It’s a fine idea however a long graphics card such as a GeForce GTX 280 or Radeon HD 4870 will overlap the cover and prevent you from operating the button. D’Oh!


Apart from that small problem the layout is exemplary although it may possibly be improved if one of the three PCI Express x1 slots was x4 to increase the options for expansion cards.

Our review sample was delivered with BIOS version F4d installed which seems to be newer than version F3i on the Gigabyte website so we left it well alone. At first we had mixed feelings about the BIOS. It is clearly laid out with all of the options that you need for overclocking but the voltage settings appear to be wilfully confusing, at least at first. All of the voltages are set relative to the default voltage so, for example, you increase the CPU voltage from the default setting of 1.325V to 1.475V by selecting a setting of +0.15V. At first glance it looks like you need to know the starting point for each voltage and then do some maths but in fact the BIOS immediately shows the results of any changes that you make and it’s the same story when you adjust the base clock speed or adjust the memory multiplier.


We found it quick and easy to adjust the CPU and memory voltages and then started to crank up the base clock speed of our Phenom II X4 810. With the Asus M4A79T Deluxe we hit a brick wall when the base clock reached 260MHz which gave a CPU speed of 3.38GHz. By contrast the MA790FXT-UD5P was happy to run a CPU speed of 13 x 275MHz = 3.58GHz and a DDR3 memory speed of 1,465MHz. This gave a small edge in performance to the Gigabyte over the Asus but in the great scheme of things the two motherboards cannot be separated. 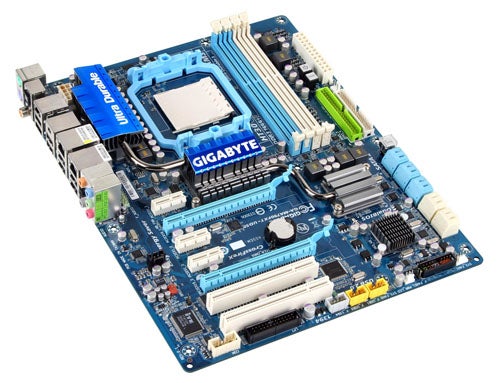 As the Gigabyte sells for £20 less than the Asus we are naturally inclined towards the MA790FXT-UD5P but that’s not the only difference. You may recall that we were unhappy with the layout of the Asus as it was quite possible to block most of the SATA connectors if you installed a long graphics card. This leaves the Gigabyte in a field of one until we see more AM3 motherboards from other manufacturers. So the question is, should you buy any AM3 motherboard, let alone this particular motherboard?


We hated the original Phenom and warmed to Phenom II but the AM3 Phenom II with DDR3 memory is very good indeed. It’s so good that we would go so far as to recommend that you buy a Phenom II X4 810 rather than a Core 2 Quad Q8200 as they both cost a very similar amount. Alternatively you can save some cash and buy a cheaper Phenom II X3 720 Black Edition for the same price as a dual-core Core 2 Duo E7500.


It’s official – Phenom II on Socket AM3 is a real winner and the Gigabyte MA790FXT-UD5P delivers the goods at a very reasonable price.