MSI is taking a scattergun approach with its AMD 790GX chipset based motherboards with basic, mid-range, and high-end model all on offer. However, it’s the mid-range DKA790GX that is the focus of our attention today.


It has dual graphics slots that support CrossFireX and also features a funky cooling system called Circu-Pipe Lite, which certainly catches the eye. On a more technical note there’s the model code with that leading D which is a reference to the DrMOS power regulation system. This is the integrated voltage regulator module that we saw on the P45 Platinum. However this is the first time the DrMOS system has been used on an AMD motherboard.


The idea is that DrMOS combines a control circuit and two MOSFETs into a single chip, which reduces the number of components on the motherboard but more importantly it reduces power consumption and waste heat, which has the potential to enable extreme overclocking.


We enjoyed great success overclocking our Phenom X4 9850 to 3.1GHz on the Foxconn A7DA-S so the prospect of extra overclocking tools on the same 790GX chipset looks like an intriguing proposition. 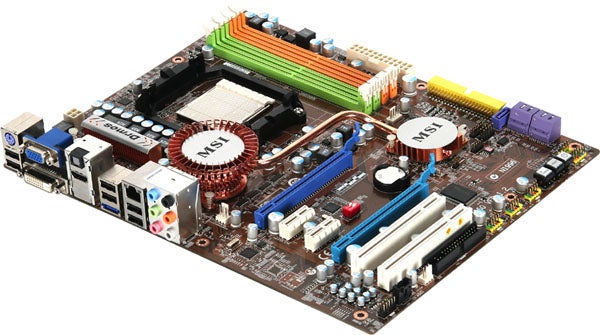 The ports on the IO panel of the DKA790GX deliver a healthy list of options that should satisfy both the media centre and gaming markets. There’s a single PS/2 port that is purple in colour but despite appearances it can be used either for a mouse or keyboard, which is a nice touch. Then we have six USB ports in wide-spaced pairs, six analogue mini jacks and optical S/PDIF for the 7.1 audio, one eSATA port, Gigabit LAN and the outputs for the integrated Radeon HD 3300 graphics.


There are three output options, which consist of an HDMI, DVI-D and VGA, so there’s plenty of choice. However we would prefer to see a DVI-I port instead. The ability to add a DVI-to-VGA adapter and run two identical analogue displays would appeal to those with older monitors. You can, of course, run two digital connections simultaneously though, which is probably the most likely occurrence nowadays.


If you buy the top-of-the-line DKA790GX Platinum you also get a single Firewire port but the controller chip is missing from the DKA790GX so you don’t even have the option of connecting a port to a header on the board. We don’t approve. Making up for this slightly, in addition to the six USB 2.0 ports on the IO panel there are two more USB ports on a bracket and headers for another four ports so at least you’ve plenty of alternative connections.


The single eSATA port is controlled by the SB750 Southbridge so there are ”only” five SATA ports on the board.


The layout of the board is generally good as the main components are in the proper locations. Both of the power connectors are placed at the edges of the board, the IDE connector is laid down as are four of the five SATA connectors. The fifth SATA stands upright which is a shame as it spoils the full house of plaudits. One oddity is that MSI has located the CPU fan connector close to the Southbridge at the end of the memory slots where it is hard up against the main graphics card.

Another quirk is the cooling system on the chipset and power supply system. The small passive cooler on the DrMOS chips is conventional during our testing it remained cool to the touch, which suggests that the technology works as advertised. However, the Circu-Pipe Lite chipset cooler is whole different kettle of fish. The Northbridge cooler is a finned circular item that stands 30mm tall and is 57mm in diameter. This is a completely different approach to the usual Circu-Pipe arrangement and in our opinion it is a step backwards as the cooler fouls the corner of our Thermaltake CPU cooler.


The Northbridge cooler is linked to the tiny Southbridge cooler with a single heatpipe rather than the dual heatpipes on the Platinum’s Flat Circu-Pipe system. During our testing we had to keep the CPU fan spinning at a brisk pace to keep both the CPU and chipset coolers at a comfortable temperature. With the fan turned down low both coolers hit 75 degrees but with a decent airflow the temperature dropped into the 40’s.


Another difference between this model and the Platinum is the absence of the 128MB SidePort memory chip for the integrated graphics.


Look between the two PCI Express graphics slots and you’ll see two dipswitches that can be used to overclock the 200MHz reference clock to 220MHz, 230MHz or 240MHz. The dipswitches are reasonably accessible even with a hefty dual slot graphics card installed. It seems like a curious method of overclocking when the BIOS can perform exactly the same task without any need to open the case of your PC and AMD’s OverDrive utility even allows you to overclock in a Windows environment. 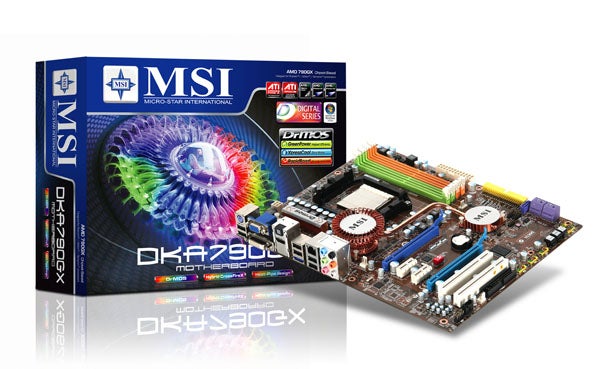 Setting up our test system was quick and easy and the only job we had to perform was to raise the memory speed from 800MHz to 1,066MHz which required higher voltage and a change in the memory multiplier. The new speed raised memory performance which is exactly what you would expect, however we saw some strange results when we reviewed the TA790GX A2+ so it wasn’t a foregone conclusion this time.


The BIOS installed on our review sample was v1.31B while the latest version listed on MSI Live Update 3 is v1.20 so we left well alone. Incidentally we noted that the Live Update 3 utility currently stands at v3.95 so we fully expect that a new version will be revealed very soon.


We overclocked our Phenom X4 9850 using OverDrive and found it was stable at 3.0GHz and looked good at 3.1GHz until it blue screened in 3DMark06 and found that performance was almost identical to the Foxconn A7DA-S which had successfully run at 3.1GHz. One glaring difference was the idle power consumption which was 145W at standard speed and 155W overclocked while the Foxconn drew a mere 115W when it was overclocked. Under load there was no difference in the power draw between the two motherboards but it rather suggests that Foxconn has done something rather clever with its power regulation hardware.


MSI has delivered an AMD 790GX motherboard that has a decent list of features, decent layout and decent performance. There’s room for improvement but as things stand this is the best Phenom motherboard that we’ve seen to date.