The latest gaming notebook to arrive on the Trusted Reviews test bench isn’t a muscle-busting monster, and it doesn’t come with the sort of price that needs a bank loan. Instead, the Asus G550JK takes a more sensible approach with a 15.6in screen, modest dimensions and a £1,099 price.

For that money you get a 1080p screen, a current-generation Nvidia graphics core and an Intel Core i7-processor. It’s a tempting specification, and one that may topple a clutch of expensive, heavyweight rivals. 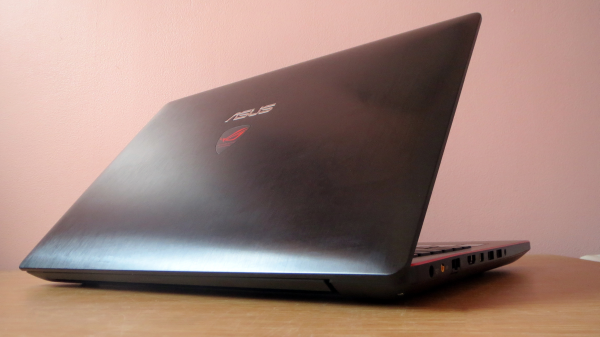 It might be cheaper than the competition, but the G550JK still looks like a high-class gaming notebook thanks to the attractive black-and-red theme. Glimpses of crimson stand out among the black brushed aluminium, with a bevelled edge around the base, red letters on the keyboard and glowing power buttons and logos.

Decent dimensions compliment the slick design: a 2.6kg weight and 28mm thickness. Those figures undercut bulky gaming notebooks, but they look almost ordinary when stacked up against the recent influx of svelter systems. The Gigabyte Aorus X7 v2 is four millimetres thinner than the Asus and weighs almost half a kilo more while the MSI GS60 2PE Ghost Pro weighs 1.96kg and is just under 20mm thin. 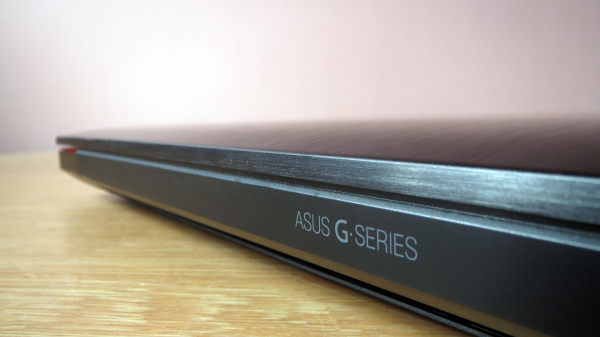 Both of those systems suffered with inconsistent build quality, but that’s not a criticism we can level at the G550JK. There’s little give across the wrist-rest and the base, and the 6mm-thin screen is sturdy: it flexes back and forward, like any 15.6in panel, but there’s no excessive movement or desktop distortion. We’d still use a sleeve or case with this machine, but it’s more able to withstand life on the road than its two flimsier rivals.

As with many slimmer machines, interior access suffers. The components are only accessible by removing tiny Torx screws, and there aren’t any spare ports or bays – the only way to upgrade is to remove components. The Gigabyte’s interior was just as difficult to access, but at least it had spare memory sockets.

Connectivity is conventional. On the outside there are three USB 3.0 ports, HDMI and mini-DisplayPort outputs and a single audio jack, and on the inside there’s dual-band 802.11ac Wi-Fi and Gigabit Ethernet. The Gigabyte, once again, proved better – it had five USB connectors and support for Nvidia Surround. 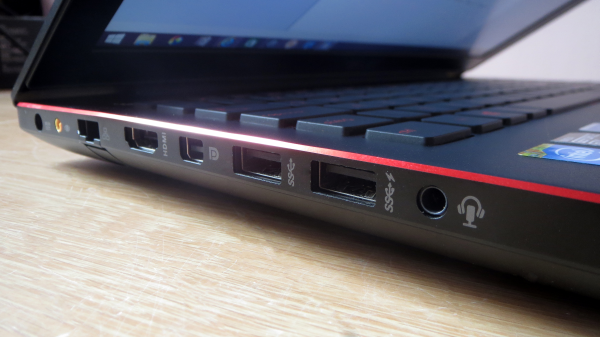 The G550JK’s screen follows the familiar gaming laptop blueprint: a matte finish, a Full HD resolution and no sign of touch compatibility. It’s an IPS panel, so viewing angles are superb.

Good quality backs up the good design. The G550JK’s panel beats its rivals for brightness, and its black level is good – better than the Gigabyte and not far behind the MSI. It’s the same story with the contrast ratio of 962:1, which is closer to the excellent MSI than the disappointing Gigabyte.

It’s a good start, and it means the Asus’ screen has the brightness and depth to show off colourful games and brooding scenes at their best. 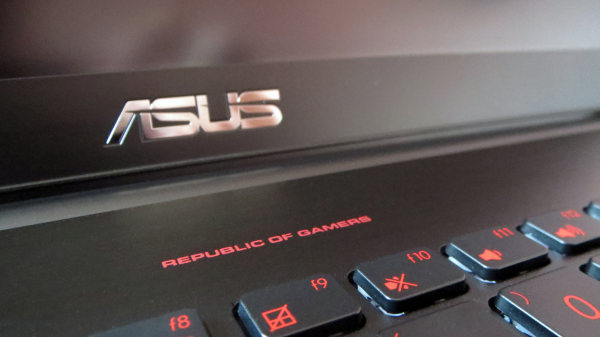 The average Delta E of 1.91 is fantastic, besting both rival systems, and it’s enough to sate all but the most demanding of graphical workers. The sRGB gamut coverage level of 93.1% is great. The screen only struggled with some red and pink shades, but we didn’t notice this lack of coverage in real-world use.

The colour temperature of 7,415K is cool, but still a better result than the MSI and Gigabyte machines. Problems with this panel are trivial: some minor black level crushing and banding. It’s a bright, accurate panel and we’ve no problem using it for high-end gameplay.

We can’t say the same for the speakers. There’s enough volume to play games and watch movies, but the G550JK lacks quality – the mid-range sounds like it’s underwater, the high-end is tinny rather than snappy and light, and bass thuds along with little nuance. Both of the Asus’ more expensive rivals have superior sound.