The Asus Fonepad is a good, rather than great, portable movie player – although the microSD card slot is a massive bonus if a media jukebox if what you’re out for. 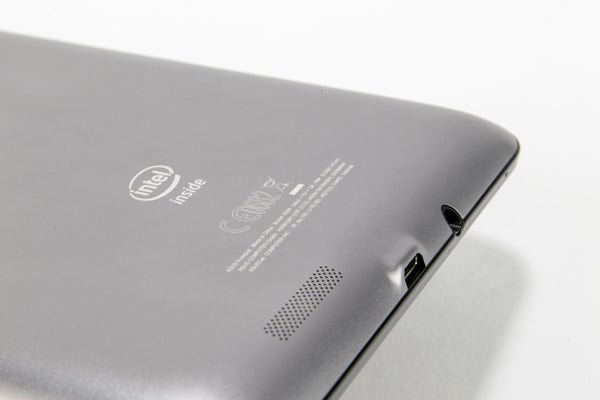 We’d recommend using headphones or external speakers, though, as the internal speaker is fairly poor. It’s a mono setup, with the speaker grille drilled into the bottom of the tablet’s aluminium rear. The Fonepad’s speaker doesn’t get particularly loud, has no bass whatsoever and is fairly lo-fi all-round.

The headphone output is not particularly loud either, although its signal is at least clean.

Like several low-cost tablets the Asus Fonepad has just one camera, and it’s not on its rear. There’s no ‘photo-taking’ camera, just the one for video chatting.

It’s a 1.3-megapixel sensor that sits up in the top part of the screen bezel, when the Fonepad is held portrait. 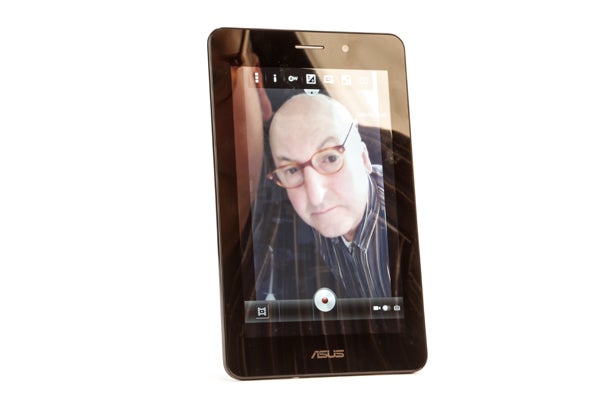 TrustedReview photo maestro Andrew gets up close to the Fonepad camera

Asus hasn’t ripped the standard camera app out of the Fonepad, so you can take standalone video and photos with the front camera, but as you’d expect photo quality is poor. It can capture 720p video of reasonable quality, though, which is its main duty.

More unexpected duties for the budget gadget – it feels strange, it feels unnatural, but the Asus Fonepad is – technically – as much a phone as a tablet. Put a phone SIM in the slot under the rear plastic flap and you can take calls and use mobile data as you would with a mobile phone.

Although Asus is happy to admit that it’s not the most convenient straight swap for a phone, suggesting you might want to use a Bluetooth headset, the Fonepad does have active noise cancellation for calls. There’s a second microphone underneath the plastic flap on the rear, which monitors ambient noise and cuts it out of the call signal to make your voice clearer in noisy environments.

Sound quality through the integrated earpiece speaker is unremarkable, with limited treble clarity, but will do the job for the occasional emergency phone call. 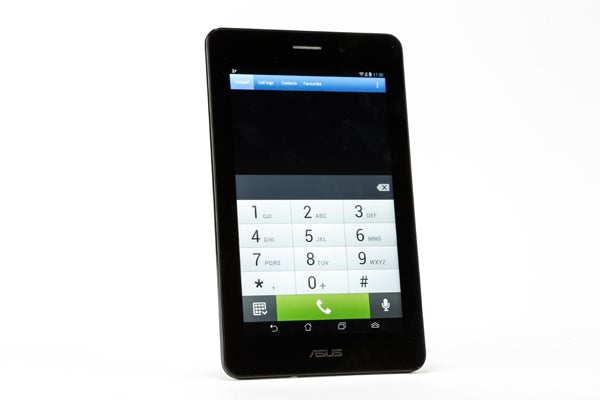 As with most tablets, the Asus Fonepad gives you no access to the battery. It’s a 4,270mAh unit – which doesn’t sound all that impressive. However, battery performance is decent.

It will last for around eight and a half hours when playing video, providing all-day use and enough juice for long journeys aboard planes, trains and… cars. The battery efficiency is down to both the relatively low screen resolution and the Intel Atom CPU, which is fairly power-frugal. 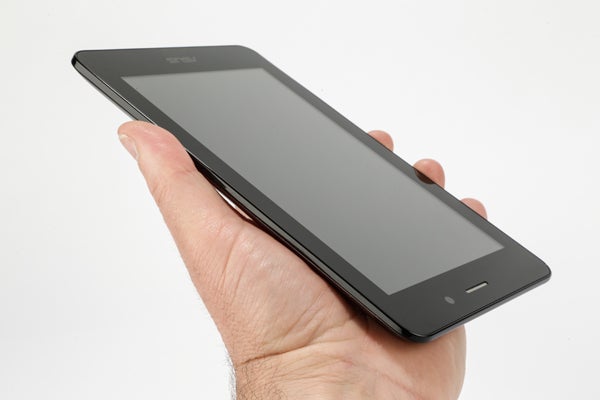 The Asus Fonepad isn’t a perfect device. Some may say it’s a wee bit portly, that its screen is just so-so compared to the competition and that the whole phone aspect of the tablet is a little silly. But it is stonkingly good value if a low-cost portable tablet is what you’re after.

It’s the best alternative to the Nexus 7, and while we like the Google tablet’s lack of non-removable pre-installed apps, it’s outweighed by the Fonepad’s expandable memory and 3G SIM slot. It may have some problems, but the Asus Fonepad is a fantastic package for under £200.

A 7-inch tablet that also wants to be a phone sounds like a silly idea. But the Asus Fonepad is, in use, entirely sensible. It’s a lot like the Nexus 7, but has a metal rear, 3G and a memory card slot – and all for less cash than the 32GB Nexus 7. Its screen isn’t great and the processor doesn’t perform well in all conditions, but this is a top-notch budget tablet.