The software at the heart of the Asus Fonepad is a little more up-to-date than its screen. The tablet runs Android 4.1.2 Jelly Bean, just one release behind the current 4.2 version.

You don’t miss out on anything too drastic, the most eye-catching addition being the 360- degree photo panorama app Photosphere, which wouldn’t be of much use on a tablet without a rear camera. 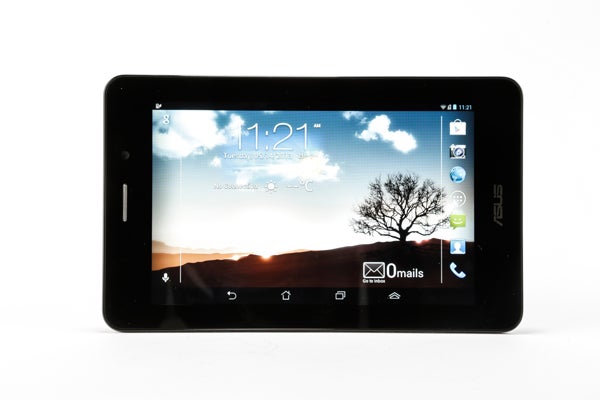 Asus has made only minor changes to vanilla Android in the Fonepad. The virtual soft key panel – needed as there are no hardware nav buttons – uses Asus’s own icons and there’s a bunch of pre-installed Asus apps. But just about everything else is stock Android.

The Asus Fonepad uses a fairly uncommon Intel processor, the single-core 1.2GHz Intel Z2420. Although its one cores sounds meagre, the performance of this cores is good.

It whips the Google Nexus 7 in some benchmarks, scoring 1266ms in the Javascript Sunspider bench against the Nexus 7’s 1700-odd. And, yes, the lower the score the better for this one.

The AnTuTu benchmark is quite the opposite, though. The Fonepad comes out with a far worse score than the Nexus 7, scoring between 5500-6500 points where the Nexus manages around 12,000. 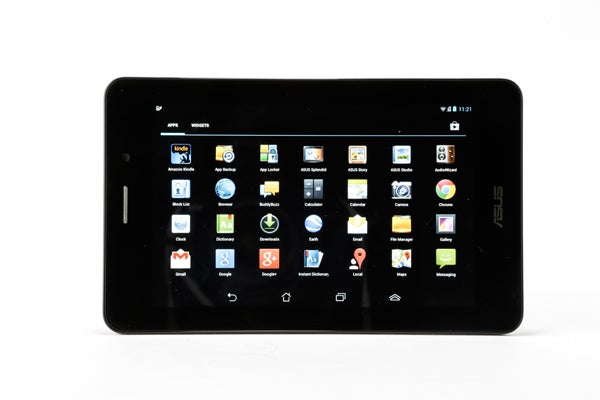 Its CPU may be powerful, but this benchmark disparity highlights the difficulty of using a processor with such a different architecture. Some apps and games will not be all that well optimised for the Intel chipset.

This becomes pretty clear when running the snazzy racer Real Racing 3. Its frame rate is perfectly playable, with just occasional dips, but the PowerVR SGX540 GPU doesn’t provide as impressive visual effects or textures as you’d get with – for example – a Tegra 3 tablet.

To put the Fonepad’s GPU into chronological context, it’s the same GPU used in the Samsung Galaxy Nexus, which was released in 2011. Ouch. All of our standard 3D test games ran though – you’ll just have to made do with slightly less flashy visuals than the top tablets in some games.

Day-to-day performance is good, although there is some minor lag and slightly longer pauses in loading apps than you might see in a top tier tablet. Given these tablets cost twice the price, it’s a minor grumble.

Asus has pre-installed a bunch of additional apps on the Fonepad, but they’re largely inoffensive passive extras rather than the sort of bloatware that tries to sculpt how you use the tablet day-to-day. 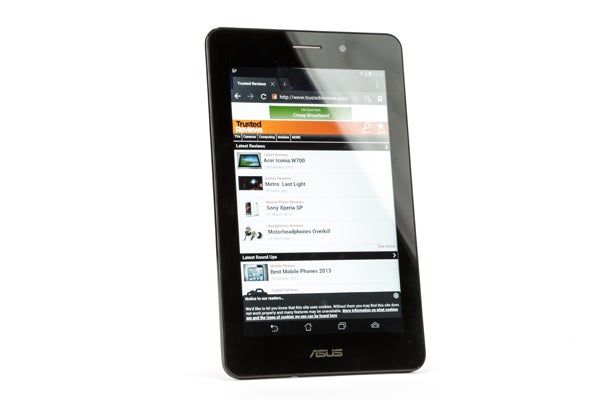 There’s an ebook reader, a note-taking app, a to-do list, an app that connects to Asus’s cloud storage service, a dictionary, chat app, file browser and backup tool. These are all base line utilities that you could easily replace after a quick trip to the Google Play app store. However, you can’t simply delete them, which is an annoyance.

There are two other apps with greater aspirations. Asus Story and Asus Studio are image-led apps that let you edit photos and weave them together into a visual narrative. Photographers may like them, but as there’s no decent camera built into the tablet, they seem on the verge of becoming entirely redundant for most people.

We could happily live without any of these extra apps, most of which are apps menu litter. However, there is one additional app that is quite excellent – Asus Splendid.

This lets you control the colour temperature, saturation and hue of the screen – letting you make the display a little more colourful if that’s your bag.

What the Fonepad lacks is a particularly good video player app. There’s an additional Asus-made one, but it doesn’t seem to offer extra video codec support. It tripped over almost all of our video files, refusing to play them outright or giving up half-way through.

Using popular third-party app MxPlayer, all types played but a 1080p MKV test continued to stutter along at less than full speed. This is likely down to limited optimisation for the Intel processor used – as we saw when playing games.