Astell & Kern's most affordable portable music player is an excellent. It's fine, unique design and focus on audio quality above all else makes this a better option for listening to music than a smartphone. Though a slightly sluggish OS and some wireless connectivity issues threaten to spoil the hi-res party

The Astell & Kern SR25 is the latest portable music player from the audio brand and its most affordable.

It’s been a couple of years since an Astell & Kern product appeared on this site, but the company’s modus operandi doesn’t seem to have changed even during this interval. Astell & Kern remains committed to building high-performance portable digital audio players of uncompromising design and fearless price. If you want a top-of-the-range A&K DAP, you’re looking at well over three grand.

Naturally, not everyone who wants better on-the-go audio performance than their smartphone has thousands of pounds in their pocket. So Astell & Kern’s latest solution, the SR25 (or, to give its full name, the A&norma SR25) comes in a slightly more real-world £649. It’s the most affordable Astell & Kern player currently available, replacing the previous entry-level model, the SR15.

But nevertheless, when everyone from Apple and Samsung to OnePlus and Sony is equipping its smartphones with hi-res DACs and half-decent headphone amplification, why would you need to spend a stack of cash on another pocket-sized device to listen to music on?

Astell & Kern is understandably proud of the design of its portable music players and the engineering processes that go into realising them. Certainly you’re not about to mistake the A&norma SR25 for any other company’s music player.

The SR25 is built of aluminium, and has quite a few divergent planes and faces making up its irregular shape. Astell & Kern achieves this effect by a) machining the metal in one pass and b) machining in five axes rather than the three-axis machining that’s more common in metal-working. The result is a product that’s way more complicated, and way more interesting, than the aluminium rectangle it at first appears to be. 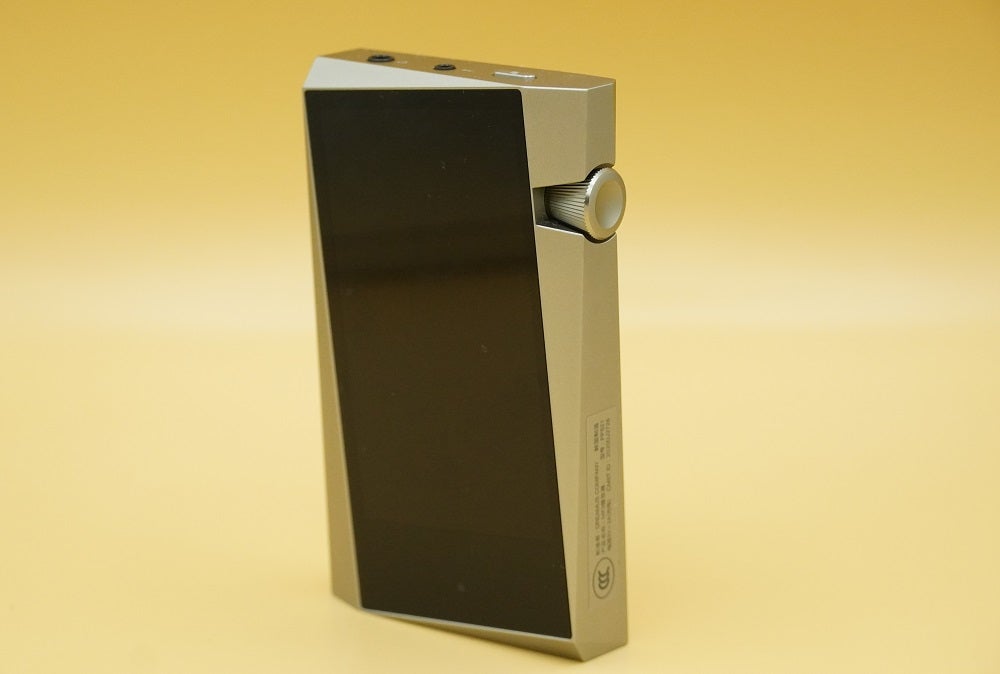 On the front of the player there’s a 91mm LCD touch-screen of 1280 x 720 resolution. At the rear, the SR25 is glass-covered. The few physical controls, inputs and outputs are arranged around the edge of the frame.

At the top there’s a power on/off button and headphone outputs (2.5mm balanced and 3.5mm unbalanced); on the left-hand side, three buttons deal with play/pause, skip forwards and skip backwards; at the bottom there’s a USB-C input for charging the 3150mAh lithium ion battery (AK is claiming 21 hours of playback from a single charge, an improvement on the outgoing SR15 of more than 100 per cent) and a microSD card slot for expanding the Sr25’s internal 64GB memory by as much a 1TB. And on the right-hand side of the frame, near the top, there’s a very tactile and gratifyingly clicky volume control.

As a collection of interesting shapes and angles, there’s no arguing with the SR25. There’s no denying that the design means this player has way more pointy corners than any nominal rival. 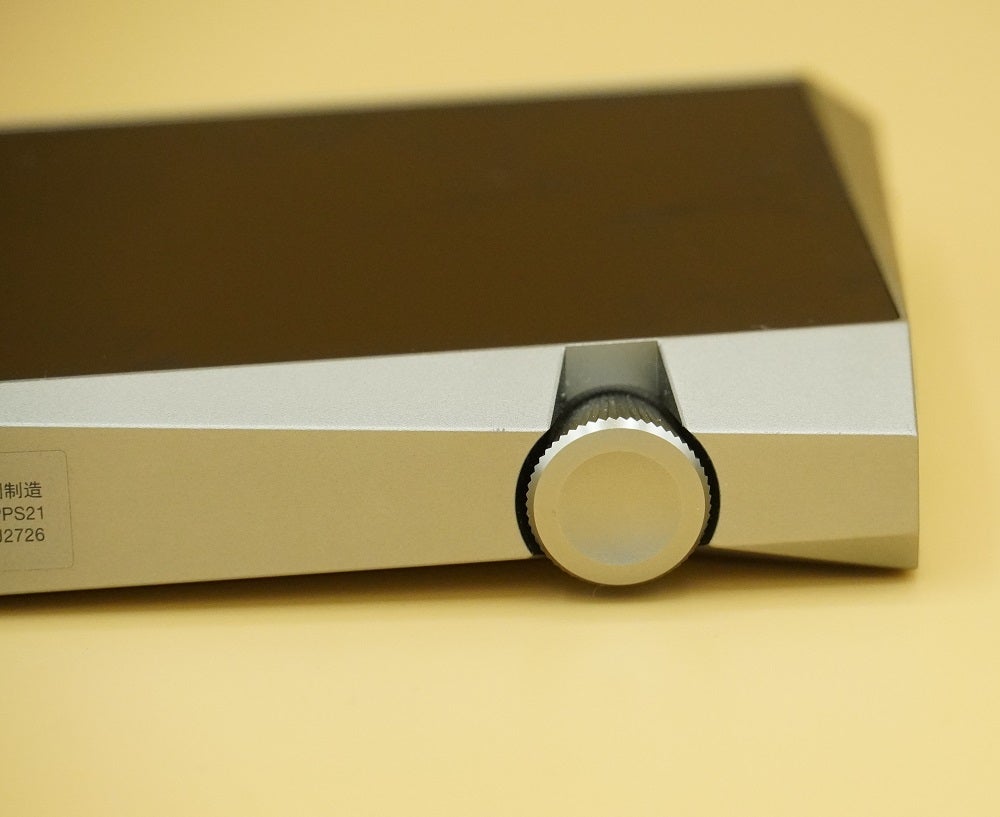 Entry-level or not, there’s been no stinting where the specification of the A&norma SR25 is concerned. It’s equipped to deal with pretty much any audio information you choose to throw at it.

All the heavy lifting is done by a pair of Cirrus Logic CS43198 ‘Master Hi-Fi Level’ DACs. These are carried over from the SR15, but by fitting a new, faster quad-core CPU and redesigning the relevant circuitry Astell & Kern has delivered native support for 32bit/384kHz and DSD256. This is the first time such heady numbers have been accessible in a standard Astell & Kern product. 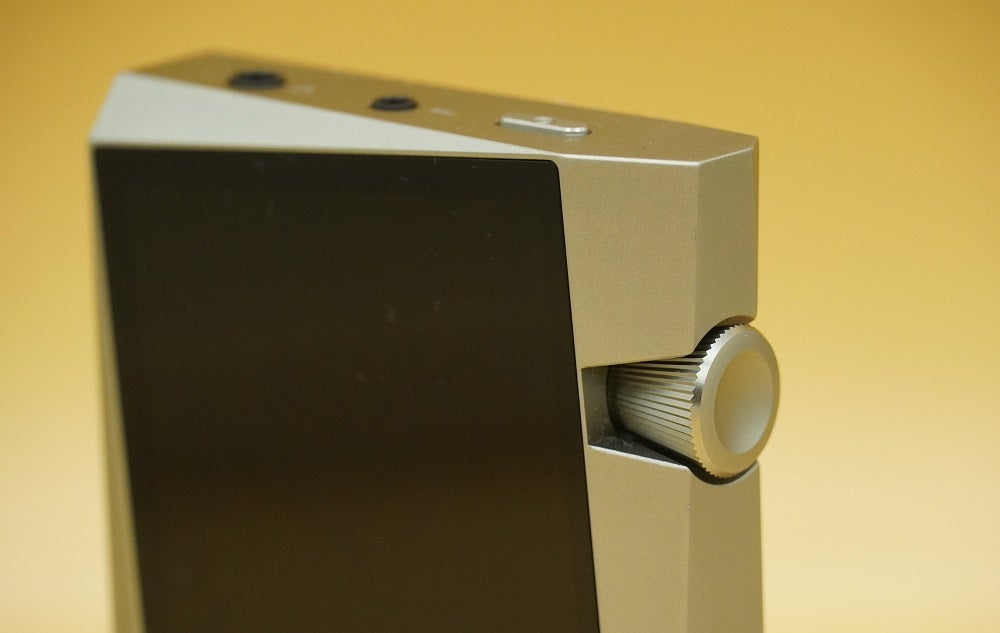 The Android 9.0 interface means Deezer and Tidal accounts can be easily accessed, and using Open APP allows other services to be installed too – the SR25’s ability with MQA makes a Tidal Hi-Fi subscription more-or-less compulsory. And despite running the relatively lowly Bluetooth 4.2, the Astell & Kern can deliver both aptX HD and Sony’s hi-res LDAC codec. Wi-fi connectivity is of the 2.4GHz variety.

The SR25 can be used as a USB DAC, naturally – so connecting it via USB to a laptop (for example) will bring quite a significant upgrade to your desktop audio experience.

It would be nice to say “the Astell & Kern A&norma SR25 sounds excellent” and be able to leave it at that. But this needs just a little qualification.

Sonically, the SR25 needs very few excuses made for it. A 24bit/192kHz file of The Band’s The Night They Drove Old Dixie Down stored on the player’s internal memory rolls along in the most natural manner imaginable, with beautifully judged weight and momentum to its presentation. 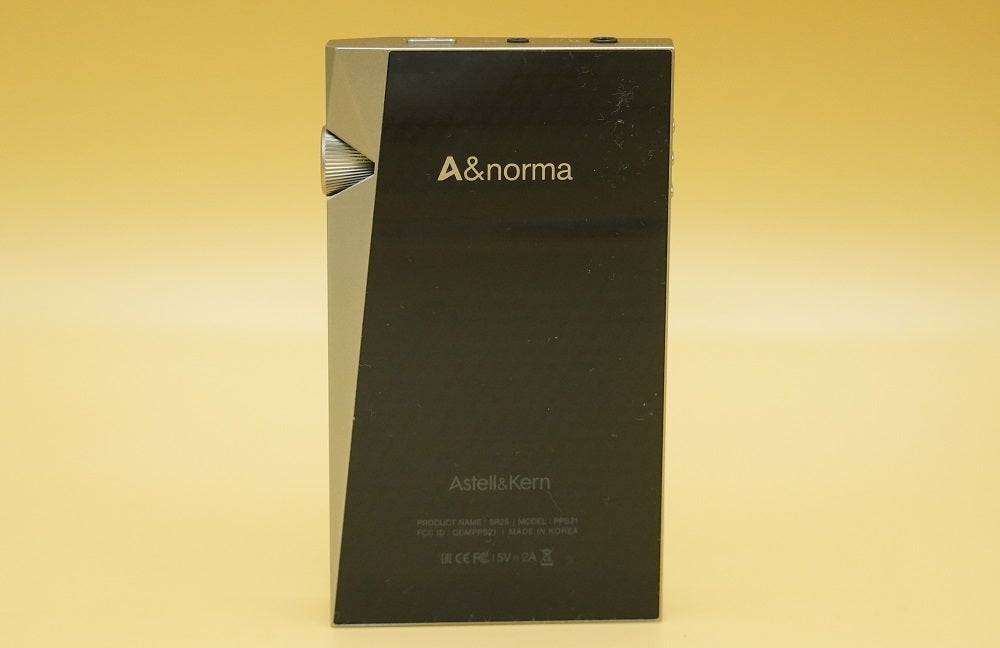 Detail levels are stratospherically high – it’s possible to identify exactly where on the surface of his snare drum Levon Helm is hitting on any given beat, it’s possible to hear Robbie Robertson switch between finger-picking his guitar and using a plectrum. The sound is spacious, with absolutely definite positioning of instruments on the stage and a comfortable amount of space between each element – but despite this openness of sound, the SR25 integrates each individual strand of the recording into a convincing whole.

Low-frequency sounds are hefty but not overheated, and carry just as much detail with them as the information higher up the frequency range – there’s remarkable variation in bass guitar and bass drum sounds, which serves to reinforce the impression of ‘performance’ in the SR25’s description of the song. The midrange is explicitly communicative, and at the top end there’s an expertly judged balance of bite and substance. 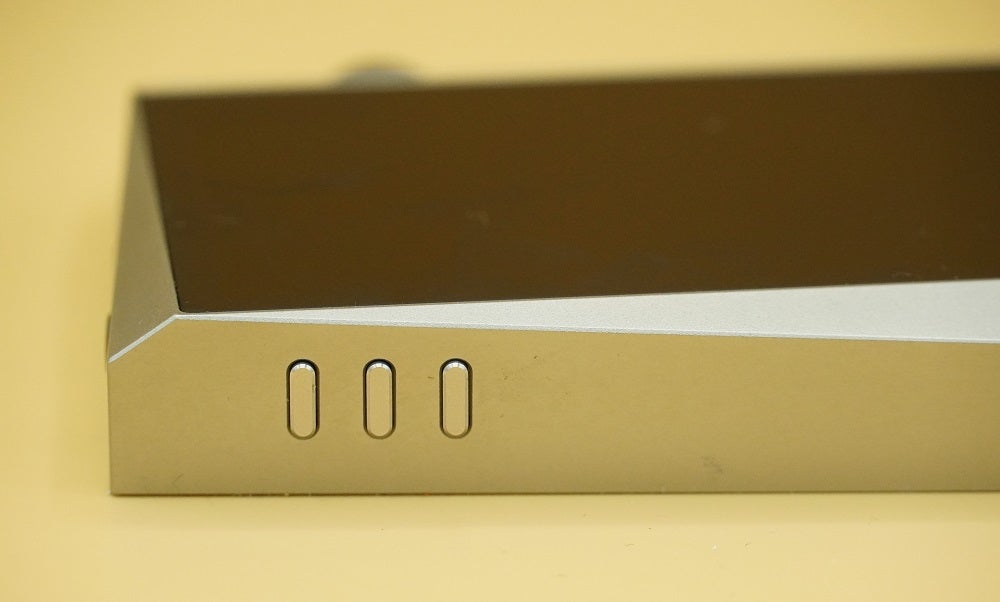 All of this holds true whether using a wired or a wireless headphone connection. And it remains true even after a fairly fundamental switch of material – Burial’s Untrue (16bit/44.1kHz) extracted from the SR25’s memory has all the bass punch, the midrange fidelity and the high-frequency grit the recording requires. It sounds simultaneously pristine and grimy – very few smartphones are able to describe this album with anything like the completeness of the Astell & Kern.

It’s every bit as effective when functioning as a DAC for a desktop audio system. The frankly shocking sound of an Apple MacBook Air connected directly to a pair of headphones is altered out of all recognition by positioning the SR25 in the chain. All of the roominess, all of the detail and all the dynamic potency of the sound it generates when used as a standalone player is here, and in spades. 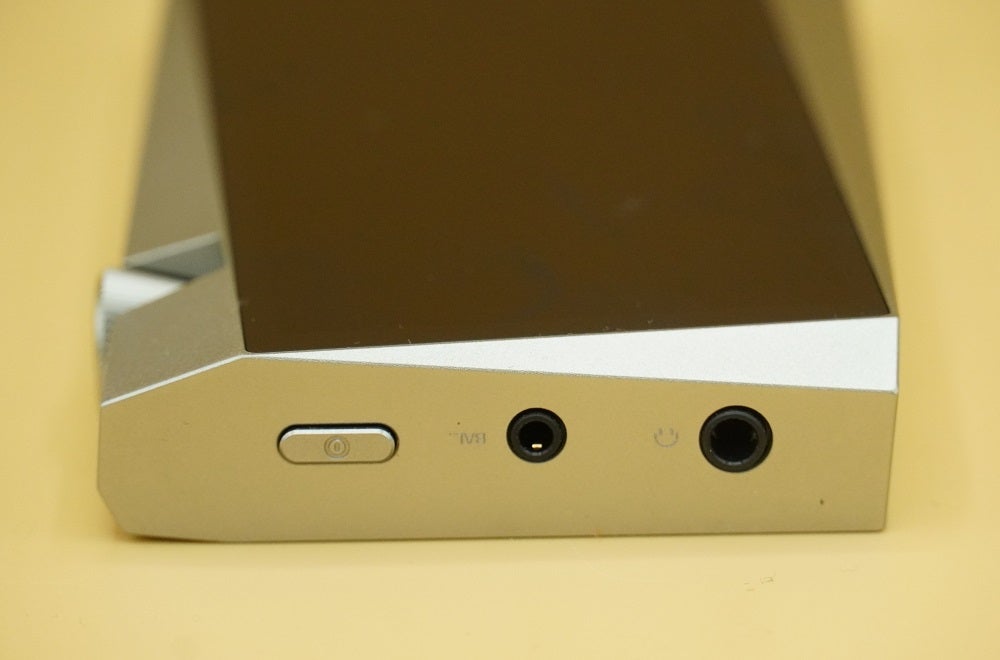 It’s only when switching to digital audio files streamed via wi-fi that the SR25 begins to demonstrate any foibles. Television’s Marquee Moon via Tidal (an MQA file the Astell & Kern reckons is running at 192kHz) has all of the openness, the gratifying detail levels and the almost instinctive unity of presentation that the music stored on the machine enjoys – but the SR25 is not above falling off the wi-fi network under no provocation whatsoever.

Marquee Moon is a long song, and it proves plenty long enough for the Astell & Kern to cry ‘network error!’ like some fairytale shepherd boy crying ‘wolf!’. It hardly needs emphasising these brief interruptions to playback tend to spoil the overall experience somewhat. 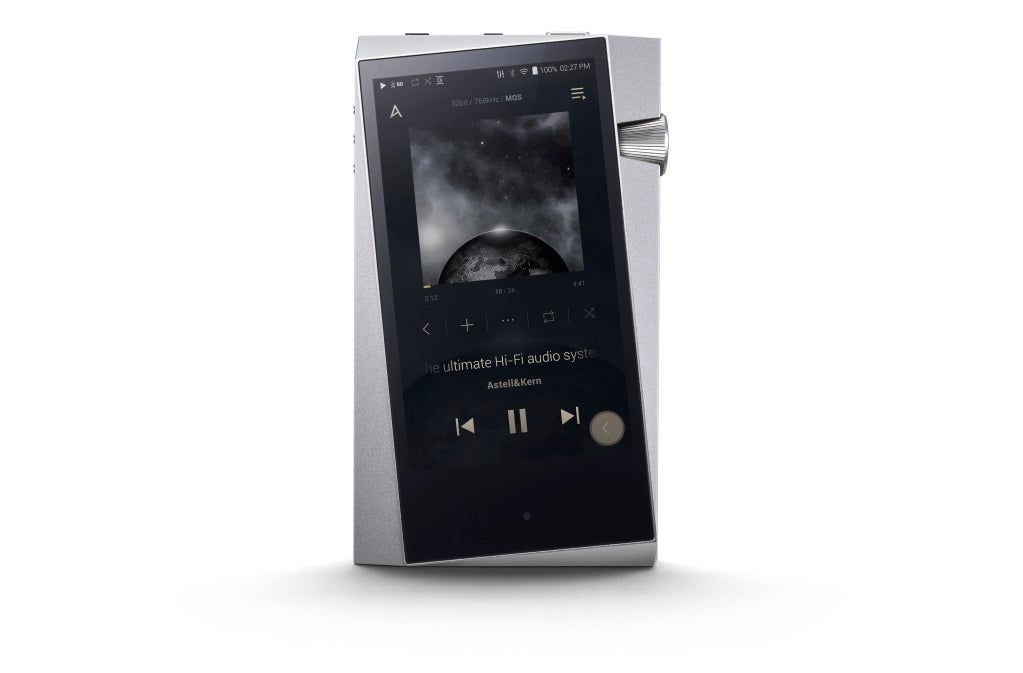 I can confirm there is no network problem at any point, as a quick glance at the laptop and the smartphone to hand during testing confirms. Perhaps it’s a downside of the SR25 only packing single-band 2.4GHz wi-fi connectivity. Whatever the problem, it’s just about as aggravating as you might imagine.

The SR25’s operating system proves a little more dimwitted when streaming music, too. A ‘skip forward’ instruction issued using the touch-screen is sometimes acted on immediately, but sometimes it can take what seems like hours (in reality it’s more like six or seven seconds).

These are not chronic problems, but they are, unarguably, glitches – and take just a little of the gloss off what is otherwise an almost impeccable performance. If they can be ironed out, the A&norma SR25 may be able to entirely undermine the more expensive models in the Astell & Kern range – it sounds that good. 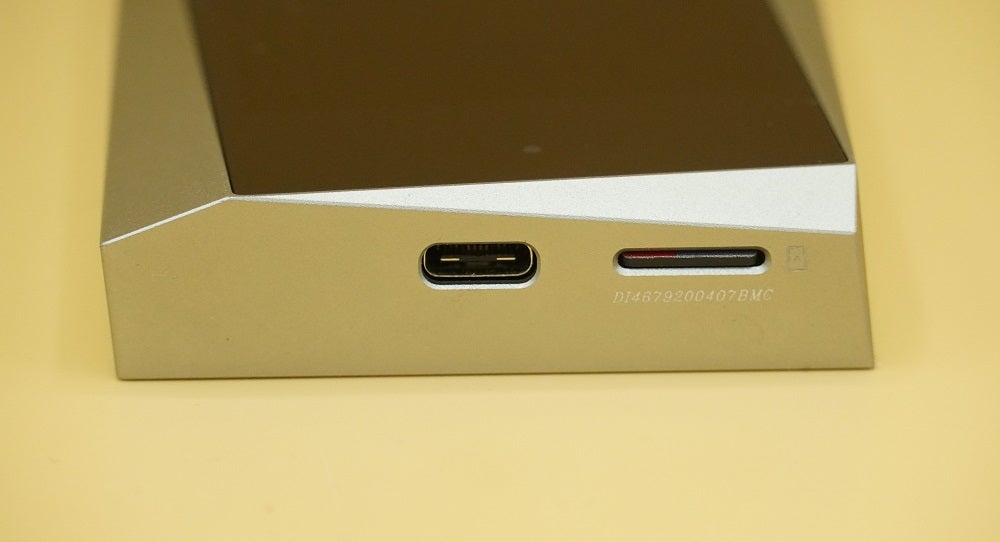 You should buy the Astell & Kern A&norma SR25 if…

If you take your portable audio seriously then a dedicated portable music player is what you’re after. At this sort of money, the SR25 produces a more open and spacious soundstage then its rivals, while also delivering in terms of detail and musicality.

Yes, some smartphones are high-resolution audio-capable and have CPUs the equal of that fitted to the SR25. But the trouble with smartphones is that they’re just so multi-tasky. There’s a huge amount of digital activity going on, and very little of it is doing anything but impacting adversely on sound quality. And the headphone socket is rapidly dying out on smartphones too, let’s not forget.

You shouldn’t buy the Astell & Kern A&norma SR25 if…

Most smartphones don’t exhibit the operational foibles of the SR25, which can be quite slow responding to prompts. And the Wi-Fi connection has a tendency to fall without much provocation.