Available on Xbox One and PS4 (version reviewed)

For Assassin’s Creed fans, the trilogy of games starring Ezio Auditore di Firenze will always be the crown jewels of the series. These three games didn’t just properly establish the series after the mixed reception to the first game, but redefined and refined its gameplay and style, while introducing the man who remains most fans’ favourite assassin.

Here we get the whole story of his life and battle with the Templars, starting from his early years as a playboy in Renaissance Florence, through to late middle-age in Ottoman Istanbul, not to mention the parallel tale of Desmond and the fight against the Templar corporation, Abstergo, in the modern world.

You’d think, then, that Ubisoft would have lavished the utmost TLC on this remaster, creating the definitive version of the games and giving a new generation of fans a chance to experience their glories.

Well, Ubisoft hasn’t. We still get two classic Assassin’s Creeds and one mostly excellent one, but if you were hoping for remasters that brought them bang up to date, you’re probably going to be disappointed. 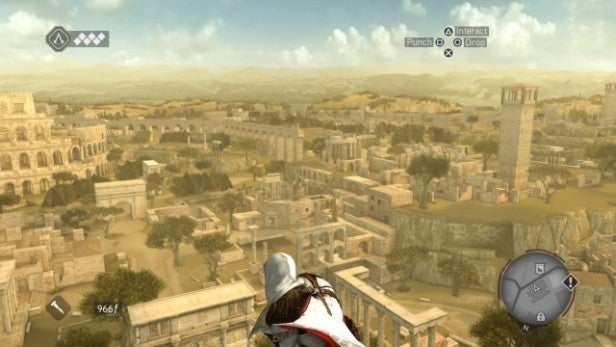 Basically, we get the three games upscaled to 1080p at 30fps with the best PC assets available, plus new skyboxes, some added architecture, and new water and lighting effects. The results improve as the series goes on, but they’re, at best, a little underwhelming.

Assassin’s Creed 2 comes off worst, with only minor enhancements, while Assassin’s Creed: Brotherhood receives a real boost in textural detail. Only Assassin’s Creed: Revelations looks closest to what you probably have in mind when you think of a remaster. Sure, the scenery still looks a little boxy or primitive at times, but the characters are nicely modeled, the facial animation doesn’t make you cringe, and the draw distances when you climb up Istanbul’s minarets are quite impressive.

It doesn’t help that AC2 can sometimes look, well, weird. I’m not sure what Ubisoft has done to try and improve the looks of Ezio, his family, friends and enemies, but some of it has backfired in the style of extreme plastic surgery on an ageing movie star. Faces look strange and rubbery. Eyes seem to bulge from sockets. It might be that AC2 has always looked like this and my memory is being kind, but there were times when playing through the early stages of Ezio’s first adventure that I found myself thinking, “Didn’t this look better the first time around?” 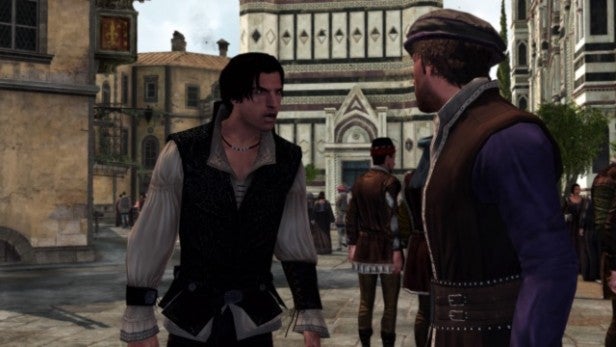 I may have had my rose-tinted glasses on for the gameplay, too. While AC2 did a great job of refining what was good about Assassin’s Creed, then rolling it into a storyline with pace, strong mission design and narrative momentum, it’s still far from being the perfect Assassin’s Creed you might remember. Combat is surprisingly messy and slapdash, while all the climbing and parkour stuff feels hostage to the vagaries of the game’s systems. It suddenly decides that what you really want to do isn’t jump upwards to the next brick ledge on the outside of a Florentine church tower, but leap sideways off the tower onto the cobbled streets several hundred feet below.

It would’ve been nice if Ubisoft had gone back and fixed this stuff, and added things like more convincing crowds and crowd dynamics, but instead we have the sequel, for good or bad, with all its virtues and its faults.

Those virtues are still there if you can look beyond the surface stuff. Ezio remains a charming and very likable lead, and by rooting the story in family, duty and vengeance, Ubisoft crafted a tale that’s much, much easier to relate to. For all the bizarre appearance of the cut-scenes, the missions do a great job of carrying you along, while the use of real renaissance figures, including Leonardo Da Vinci, Lorenzo de Medici, the Borgias and Machiavelli, just adds to the feeling that you’re being let loose on the pages of history. What’s more, in Florence and Venice Ubisoft found settings that were perfect for the pursuits of morally justified murder and virtual sightseeing. 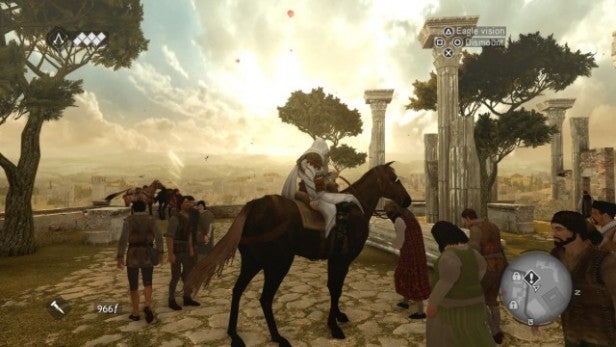 Assassin’s Creed: Brotherhood is better still. The combat is tighter, faster and more free-flowing, while the movement seems less prone to bizarre misinterpretations of your inputs on the controller. Rome beats Florence and Venice on size, but also on depth and atmosphere, and there are some superb, almost Tomb Raider-like sequences of climbing and puzzle-solving on top of the usual exploration and assassination.

Meanwhile, the additions to the gameplay work in its favour. Having fellow assassins that you can call on can be great when you want to cut down the hard graft or even the odds, and sending them off on missions around Europe makes for a fun diversion into dumbed-down strategy. You can do more from horseback, making equine travel an effective and even murderous way to get around the city, while new gadgets such as the poison darts and parachute put some interesting new options at your disposal.

In Cesare Borgia, Brotherhood also has what might be the series’ greatest villain, and even the Desmond sections aren’t too tiresome, because at last he has some interesting platforming and puzzling to do himself.

Assassin’s Creed: Revelations got some stick on release for coming so soon after Brotherhood and doing so little to advance the formula, but played again now some of that seems undeserved. True, it feels a bit like a stopgap between Brotherhood and the next (and rather disappointing) numbered sequel, Assassin’s Creed 3, but it has a fascinating main setting in Istanbul, while its depiction of an older, wiser Ezio shows a series growing in depth and maturity. 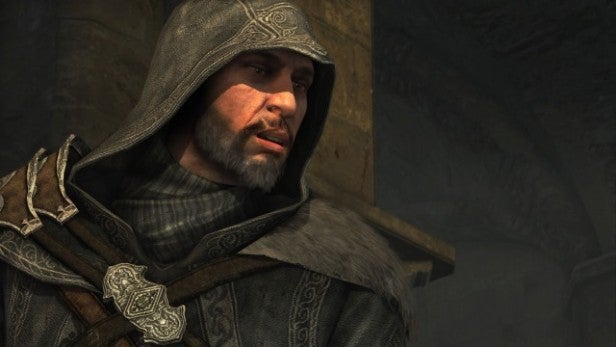 Some of the new ideas thrown in, like the ludicrously detailed bomb customisation system and tower defence minigames, point to the overstuffed future. However, others, such as the reach-extending Hookblade, genuinely improve the action, giving you faster ways to get up and around the city’s districts. And while the new Desmond’s Journey sections, where the modern hero wanders around a surreal virtual landscape, trying to tie the series’ storylines together, seem like a step backwards into tedium, they’re relatively short and sweet.

The Ezio Collection includes all the single-player DLC and the Embers short movie, but dumps the interesting cat-and-mouse multiplayer that was introduced with Brotherhood and reworked for Revelations. Given the sheer amount of content on offer, it’s hard to complain, and it’s not as if online play has even been a major focus of the franchise, barring the push into co-op we saw with Assassin’s Creed: Unity. As far as compromises go, it’s an easy one to live with. 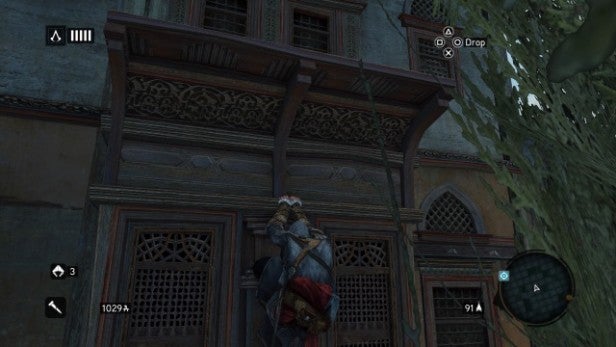 So, now for the big question: is it worth splashing out on The Ezio Collection? Well, if you’re relatively new to the series and keen to play catch-up, it is. Soldier on through the visual disappointments of AC2 and you’ll still find three very compelling historical action adventure games, though I’d argue that Assassin’s Creed 4: Black Flag might be an even better Assassin’s Creed to start with.

For those of us who played through the series on their original outings, though, I’m not so sure. While Brotherhood looks better than AC2 and is itself improved upon by Revelations, none of the games are a massive step forwards from the earlier versions, and arguably your memories will be more impressive than the reality here. It’s tempting to go back and spend another 40 hours or so with Ezio, but nostalgia only goes so far. These were great games for their time and they’re still hugely enjoyable today, but wouldn’t you rather spend your time playing something more of the here and now?

The Ezio Collection nets you two classic Assassin’s Creeds and one that’s still one of the best ones – but the remastering doesn’t really do them justice. Would it have hurt to bring AC2 and Brotherhood up to the more lavish visual standard of Assassin’s Creed: Revelations, or bring the combat and controls in line?

Luckily, the strong storylines of the Ezio trilogy and the Florentine’s charisma still shine through, but while The Ezio Collection is a great catch-up set for Assassin’s Creed newcomers, it doesn’t really do enough to reward old fans coming back for another spin.