The ASRock Z170 Gaming K6+
is the top-end board in the company’s Z170 gaming range. This is
signified by
the Fatal1ty branding and the inclusion of “enhanced audio and graphics
design, plus improved stability, specifically tailored for gamers”.

In
non-marketing speak this translates to having a more hefty 12-phase
power delivery to
the CPU for better overclocking, Killer LAN for prioritising gaming
traffic over your network, and a Fatal1ty mouse USB socket.

That may
not sound like much – and, sure enough, that’s why it costs only £30 more
than the mid-range ASRock Z170 Extreme 4+ – but it adds up to a board
that’s certainly well worth considering.

ASRock’s Z170 board wears its gaming heart on its sleeve, with a host of bright
red highlights adorning the otherwise all-black board. A
shiny, spiky logo can also be seen on the chipset heatsink and there’s a smattering of Fatal1ty
branding too.

For those who don’t know, Jonathan “Fatal1ty” Wendel is an
ex-professional gamer who has attached his brand to a host of hardware
products over the past 10 or so years.

The design works quite well, with a the red highlights not making the board look too garish. That said I’m not overly keen on the Fatal1ty branding and prefer the even subtler look of the  Extreme 4+, but for fans of black and red it
certainly hits the mark. 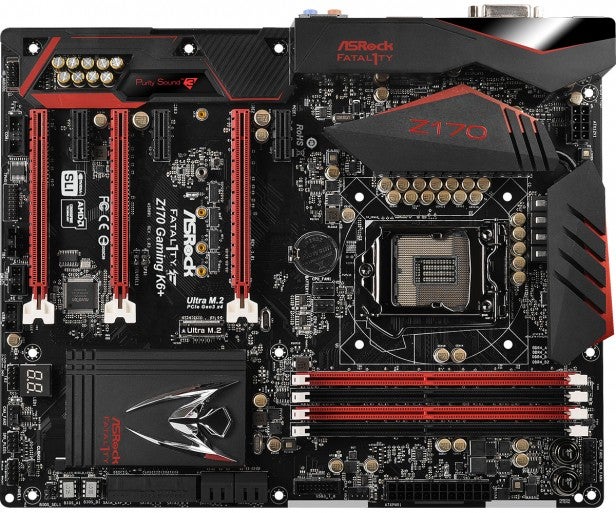 Looking more closely at the
feature set, the Gaming K6+ will support all the latest Intel Skylake
CPUs with its LGA 1151 socket, and marries that with support for up to
64GB of 3,886MHz DDR4 RAM. Said memory slots also use the convenient
one-sided installation mechanism, where there’s a clip only on one side of each DIMM, which means you don’t have to worry
about the clips fouling against your graphics card when you try to open them.

You can also
run up to three AMD graphics cards or two Nvidia graphics cards,
including support for quad-SLI with dual-GPU cards. Sitting between the three
x16 PCI-E slots are three x1 slots, meaning there’s no legacy PCI
support here.

However, you do get an M.2 slot for adding a
slim-line PCI-E SSD. Its position is such that it’s likely you’ll have to
remove your graphics card to get to it – but that’s common enough on these boards.

Elsewhere,
there are all the usual enthusiast conveniences such as onboard power and
reset buttons. Also present is an LED post readout and a CMOS reset button on
the rear IO plate, making installation, overclocking and problem-solving
nice and easy.

All the fan headers support PWM speed control and two are conveniently situated right at the top of
the board, while a further two are placed further down and a further two are
for the CPU cooler.

Those that like to keep their systems’ cables in order will also be glad to see that all the SATA/SATA Express ports are right-angled and situated next to each other on the right edge.

The
main performance feature of this board over lower models in ASRock’s
range is the 12-phase power delivery, which is topped by more generous cooling
too. This should ensure even more reliable power delivery for a stable overclock.

You also get a Fatal1ty mouse
port, which, when combined with ASRock’s software, allows you to set the
polling rate from 125Hz up to 1,000Hz. With most decent gaming mice
allowing you to set this from the mouse driver, it’s a very niche
feature.

Killer
LAN is potentially more beneficial, since it ensures your gaming network traffic is
always given priority for reduced latency. Of course, it can’t prevent
others on your network ruining your experience, but at least it will
ensure your computer isn’t the bottleneck.

You wouldn’t know
there was a different LAN port looking at the rear IO of the Gaming K6+,
compared to the Extreme 4+; both look identical. This is in contrast
to some boards that include Killer LAN in the form of an extra
port – here it just replaces the Intel Ethernet port.

Otherwise,
the set of inputs and outputs is mostly decent. There are six USB 3.0
ports and two USB 3.1 ports (including one in Type-C format), the CMOS switch, plus HDMI/DisplayPort/DVI display outputs and onboard audio with a digital optical output.

You also get a PS/2 socket, for all those gamers will to spend hundreds of pounds on a new motherboard and processor but not buy a new USB keyboard/mouse.

Motherboards performance is tested with Cinebench’s single and multi-core benchmarks to show how a board can alter
the ability of a processor, and 3DMark’s Fire Strike test is used to
evaluate graphics performance.

Also measured is the idle and
peak temperature of the processor in my test rig, and the power levels
of my machine in order to see how motherboards influence heat and power
consumption.

This high-end ASRock board shows what it’s made of in comparison to its cheaper sibling, delivering a score of 651 in
Cinebench’s multi-core
benchmark. This compares to a score of 647 for the cheaper board. It also showed a small advantage in 3DMark, scoring 10,791 compared to 10,736.

This
extra performance does come at the expense of a tiny increase in power
consumption, though. In idle it consumes 39W, compared to 36W, and under
load it sucked up 283W, compared to 281W. 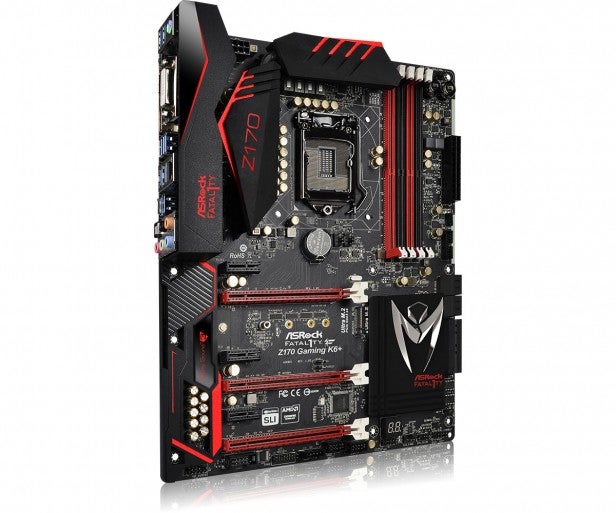 The
Gaming K6+ packs in a great set of features that’s ideal for any
enthusiast home user. It has all the performance you could want in addition to the little extras tinkerers and overclockers like to see.

It perhaps lacks
that one key stand-out feature – a high-end audio solution or extra M.2 slot – that would have elevated it above rivals, but nonetheless it’s a solid platform that has the performance and
core feature set to mostly justify its price.

Those who don’t
care too much about overclocking may prefer ASRock’s own Extreme 4+, which is a slightly cheaper option that misses out on little else.

The
ASRock Z170 Gaming K6+ is a great board for those looking to build a
powerful Intel Skylake-based PC and want to do some
overclocking. Its headline extras are of debatable real-world use – but nevertheless it
delivers on looks, overall features and performance.