The Z170 Extreme 4+ sits pretty much smack bang in the middle of ASRock’s Intel Z170 motherboard offerings for use with Intel’s new Skylake processors. It offers some key enthusiast features such as onboard power and reset buttons, LED post readout, M.2 SSD storage, and a rear IO panel CMOS reset button and marries them with a tidy copped-on-black design.

It’s not going to set any new performance records but should offer a great balance of features for most home users.

Generally one of the first things to fall by the wayside when it comes to less than high-end motherboards is design, with uniform colours being dropped in favour of using whatever is cheapest.

Here though, the Extreme 4+ has a tidy all black PCB and selection of components, with a few reasonably classy looking copper highlights. I actually think it’s one of the better looking motherboards you can buy.

It’s also immediately obvious that the Extreme 4+ is in possession of some key features that home builders and enthusiasts will be happy to see. 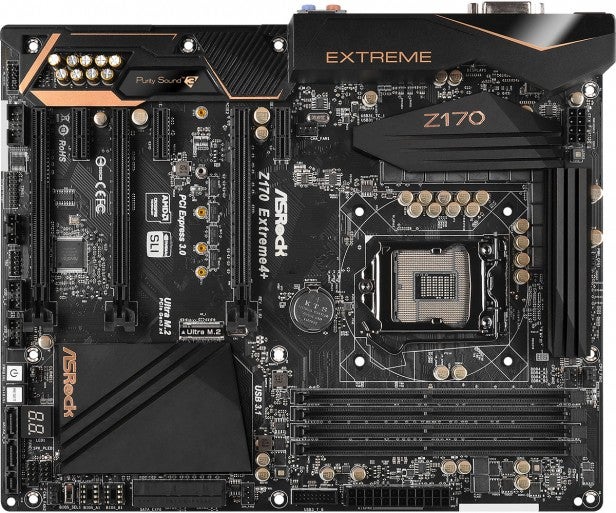 In particular, you get onboard power and reset buttons as well as an LED post readout, making it easy to test and diagnose any problems. There’s also a CMOS reset button on the rear IO panel which makes it easy to recover from overzealous overclocking.

It also has nice chunky and easy to operate release mechanisms for the x16 PCI-E slots, making graphics card removal easy. Plus the memory slots use a one-sided installation design that means you don’t have to worry about the clips on one side fouling against the graphics card, thus making RAM upgrades difficult.

Elsewhere, most of the SATA ports are of the right-angled variety, making for tidier installations, though notably not all of them are arranged this way. You also get one M.2 slot for installing an SSD. The positioning is a quite common one, between two of the PCI-E x16 slots, but it will mean you can’t access the card without removing your graphics card.

Otherwise the board looks pretty typical with few major complaints.

Notably, for all the fancy looking heatspreaders and shrouding, the actual cooling hardware is basic, with no heatpipes being used – they’re just lumps of aluminium. This hints at the fact this motherboard isn’t designed to push the boundaries of overclocking performance.

It’s also holds back on the extras. There’s no Killer Ethernet, onboard Wi-Fi, high-end Audio and there’s a notable lack of fan headers on the top edge of the board.

The rear IO, though, offers a good balance of connections, even if most users will likely have no need for the video connections and PS/2 port. Crucially, though, at least the video outputs are all modern connectoins, with HDMI, DisplayPort and DVI on offer – no VGA like on some cheaper boards. You also get eight USB 3.0 ports – with one in a Type-C configuration – and basic onboard audio that offers surround sound and an optical digital output. Plus, of course, there’s that CMOS reset button.

All told, while the video outputs and PS/2 are something of a throwback, it’s not like you’re loosing out on any other key features for their presence.

I’ve run these
motherboards through a variety of tests to determine how a choice of
motherboard can influence processor and graphics card performance.
Cinebench’s single and multi-core benchmarks show how a board can alter
the ability of a processor, and 3D Mark’s Fire Strike test is used to
evaluate graphics performance.

I’ve also measured the idle and
peak temperature of the processor in my test rig, and the power levels
of my machine in order to see how motherboards influence heat and power
consumption.

This mid-priced ASRock board also fell in the middle of the pack in
benchmarks. Its Cinebench single and multi-core scores of 168 and 647
were close to the slightly more expensive ASRock Gaming K6+ but unable to match the Asus Z-170-A and
its 3D Mark result proved similar. 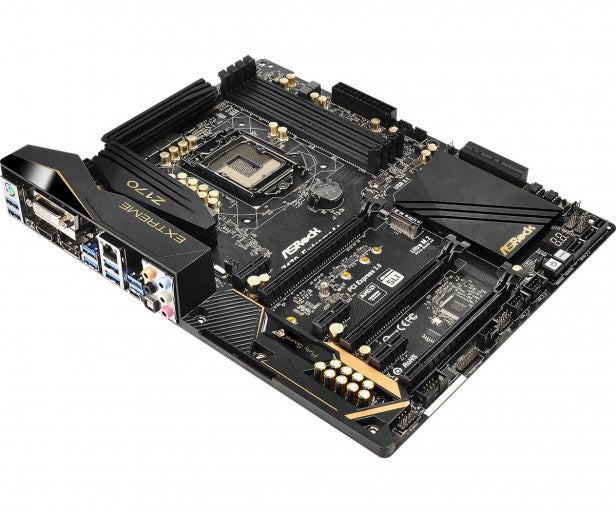 The ASRock Z170 Extreme 4+ certainly isn’t extreme by nature but it’s still a good choice if you’re after a good balance of features at a modest price. It offers the design and many of the convenience features we expect of a more premium motherboard and instead saves where truly costly extras, like fancy audio, comes in.

This particularly pays dividends on an ATX board like this where’s it’s that much easier to add those extras via expansion cards.

That said, there’s no denying that is trails the best boards when it comes to performance and overclocking options so isn’t for those that really like to push the limits of overclocking.

I like the ASRock Z170 Extreme 4+. It doesn’t have every last fancy feature you could want but it has the ones that make installation and upgrades easy and has a solid feature set that should see it have everything you need for the foreseeable future. Not one for extreme overclockers but a decent choice for everyone else.