You don’t need me to tell you that the iPod touch is pretty awesome. A lot of people are pretty darned enthused – 20 million buyers can’t be wrong, surely?


Certainly, the iPod ecosystem might be frustrating to those who want to be completely in control of their devices, but those of us happy to trade away a little freedom are rewarded with an incredibly slick user experience. The vocal minority might disagree, but iTunes isn’t that bad and it’s by having a closed system that Apple was able to build its dominant lead. Like it or not, the record labels are still pretty keen on controlling how you use digitally purchased music and by facilitating that control Apple has been able to dominate the download market.


The key to the success of the iPod touch (and by extension the iPhone) is that Apple created a fantastic hardware platform on which apps can run. Of course the media playback aspect of that platform works well for Apple, as selling media (be that music, films or TV programmes) is a major part of its business, but it’s the (semi-)openness to third party developers that really makes it shine and its in that direction with which Apple has focussed the improvements to this iPod touch revision.


The big change in this generation affects two thirds of the iPod touch line-up. The entry level, £149, 8GB touch is – updated firmware aside – entirely unchanged. But while the £229, 32GB and £299, 64GB models may not look any different, inside they’re now running faster hardware, as featured by the iPhone 3GS. 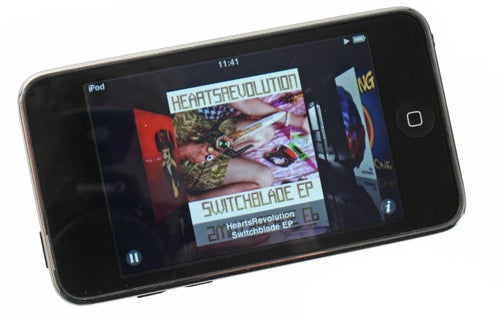 As we noticed when using its call-making counterpart the faster processor and graphics chip make using the upgraded touch much snappier. I’m in agreement with Riyad that for most applications it’s probably the faster GPU that’s to credit, thanks to its faster rendering of the iPod touch’s graphics-heavy interface. Although I’m sure the processor helps loading the inordinate amount of Notes I’ve taken, even if it can’t help me discern what I was thinking when I wrote most of them in pseudo-shorthand gibberish.


The upshot is that the 3rd gen iPod touch causes me a lot less frustration than my iPhone 3G, which is starting to feel decidedly slow in accomplishing even the simplest of tasks. Whether it’s browsing in Safari, checking out videos on YouTube or launching apps, everything is that bit quicker. It might only be a second or so each time, but day-in, day-out it’s noticeable.


If you are going to buy an iPod touch, ignore the 8GB model. It’s too low a capacity for this class of device – good luck fitting a decent amount of music, videos and apps into the 7GB of free space you’ll have – and for £80 more you’ll get four times the capacity and a faster device. It’s a no brainer to my mind.


There are plenty of great games for the iPod touch but the pricing is reflective of the level of entertainment on offer. The most expensive game I’ve purchased – Blue Skies 3GS at £8.99 – I only have because I wanted to see what enhancements OpenGL brought with it and the result is entirely underwhelming. The benefit of the faster internals thus far is definitely in shorter app loading times, not improved graphic fidelity. 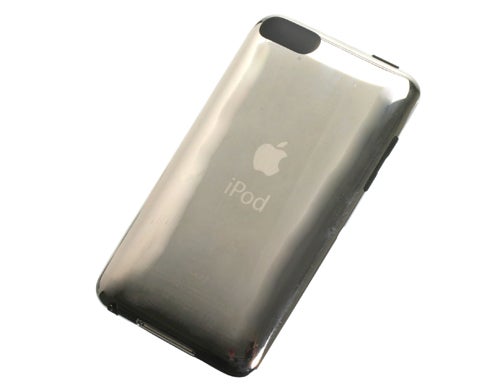 As fun as some of the games available are, the App Store lacks anything with the charm of Patapon or the depth of The Legend of Zelda: The Phantom Hourglass. The iPod touch versions of SimCity and Monkey Island, which I utterly adore, are as close as you can get to a ‘proper’ game.


As the Wii proved, though, casual drop-in, drop-out gaming is hardly something to be criticised. For sure, if I’m at home and want to entertain myself for half an hour I’m more likely to fire up Horde mode in Gears of War 2, or play a couple of quick deathmatches in Resistance 2, but I’m hardly going to take my Xbox 360 or PS3 on a train into London. 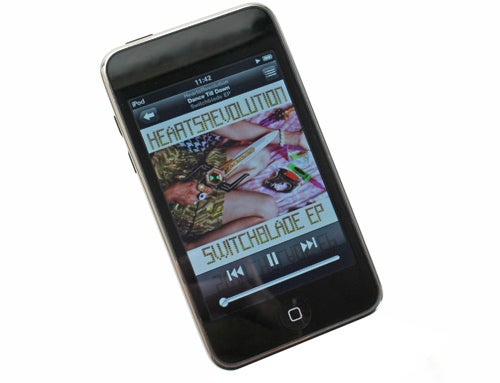 Battery life falls just short of being a concern. Gaming is obviously more demanding than music or even video playback, although by how much depends on the title. SimCity, for example, is fairly draining, taking about three hours before the touch will throw up a 10 per cent charge remaining message, but you’ll get closer to 4.5 hours out of less intensive titles like Touchgrind or AloneAtWar.


That might sound poor, but in real terms the result is enough power to game your way through an hour commute on a train into work, listen to music all day (if you’re fortunate enough to have a job where you can get away with doing so) and still have enough juice to watch a couple of episodes of ”Family Guy” on the way home. At least with an iPod touch you won’t be killing your ability to make or receive phone calls if you do run out of power – unlike on the iPhone.

The App Store doesn’t just give the iPod touch access to a huge library of games. There’s a veritable plethora of other apps, too. Safari is an incredibly good mobile web browser, there’s no denying that, but given the choice I’d rather check Facebook or Reddit via their respective apps – the process is just that bit slicker.


There are plenty of examples of great apps for the touch, from the Sonos remote control to Spotify. A few of them are perhaps a bit overpriced for what’s on offer – £5.99 for train times? Really? – but for the most part the pricing seems pretty decent. 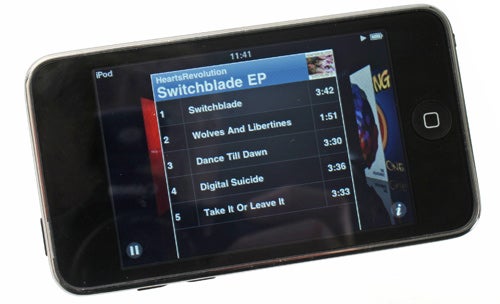 The real problem with both games and apps is that with so many available through the App Store, it’s hard to know which ones might be worth taking a look at. Luckily, Apple has done some work to fix that with the latest touch firmware update. Genius, previously used to recommend tracks on the iTunes store you might like to buy based on what’s already in your library, now works for apps too.


App recommendations aren’t, in my experience, quite as good as with music, but for the most part the results are decent enough. Based on having installed iReddit, for example, Genius reckons I might also like the NYTimes application, while also suggesting that based on my purchase of SimCity I might also want to check out X Plane Airliner. It’s just a shame there aren’t any filtering options to limit recommendations to only four star or better rated ones, or just free apps, say.


On the subject of Genius, I should mention that the music side has been updated, too. If you have the latest firmware (again, on any generation of device) and iTunes 9 – which you really should get anyway as it’s much improved over iTunes 8 – you’ll get access to Genius Mixes.

In effect, these mixes are little different to hitting the Genius icon while playing a track – you still get an automatically generated playlist of tracks that, to quote the Apple tagline, “go great together.” With mixes, however, playback is continuous. Grouping is done by Genre, although I’m assured that the algorithm takes much more than that into account, which I’m more than happy to believe.


I’m not quite as enthused about Genius Mixes as the ‘normal’ way of using Genius. By dint of playing a wider sample of tracks, the selections felt a little less smart and a bit more eclectic. That’s not to say that an ‘Alternative & Punk Mix’ of Green Day, Blink-182, The Offspring and Nirvana doesn’t work, but occasional oddballs like Paramore and Taking Back Sunday don’t fit quite as well. Call me picky, but I don’t think In Bloom flows into Dance, Dance particularly well. Although if you need me to point out that those songs are by Nirvana and Fall Out Boy respectively, maybe you wouldn’t mind.

The 32GB and 64GB versions now come with the remote and microphone version of Apple’s headset. This brings a couple of neat additions, although I’d argue none are good enough to warrant putting up with the awful audio quality of Apple’s bundled ‘phones. Voice Memos aren’t exactly a killer feature to my mind anyway, so it’s not a big sacrifice to use mic-less earphones if you’ve got a pair.


As with the iPhone 3GS, the 32GB and 64GB versions now support Voice Control, too, which is of course unusable in public unless you want to look like a pillock. Although I must concede that the look I got from one lady when requesting of touch: “play Cute Is What We Aim For,” while wandering through Marks & Spencer, was somewhat priceless. 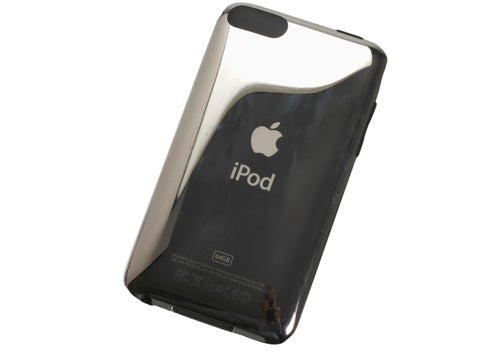 So far so good but, despite all the deserved praise, something is amiss. The problem isn’t with any of the touch’s features, but rather the lack of one in particular – a camera. It seems utterly ridiculous that both the iPhone and iPod nano have cameras but that the iPod touch is left bereft.


I’m entirely appreciative of the argument that a camera – be it for stills or video – on a media player is pretty unnecessary for the most part, but the iPod touch isn’t just a media player. It’s obvious that Apple wants to keep a level of distinction between its ever converging devices but that’s only a good thing for Apple itself. 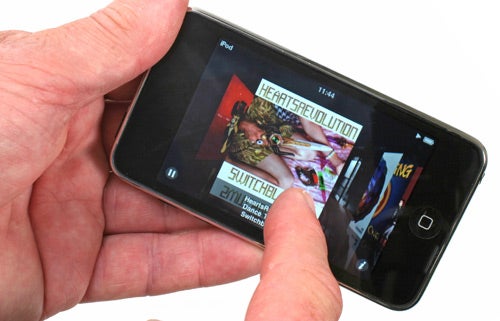 Should you boycott the iPod touch because of this? No, that would be silly. It’s still an utterly fantastic device. The closest rival, Sony’s NWZ-X1060 offers much better audio fidelity, but it loses out in just about every other respect. The iPod touch’s user interface is just better, its web browser is better and its 3rd party app support is better, in that it has it. If you need more than 32GB of capacity Sony can’t help you at all and for once, Apple’s pricing is competitive. A media player with 64GB of flash storage for £299 seemed like a pipe dream not so long ago. Sure, that’s a lot of money in anyone’s book, but you’re getting a lot for it.


As a mere media player, you’d be hard pushed to justify the high cost of an iPod touch. But as a mobile computing device that will run 3rd party apps, play games, browse the web and play your media, it’s simply unrivalled.