Let’s make this short, because time you spend reading on could be time spent playing the game instead (unless you’re sneakily reading this in the office, in which case getting out your DS for a session right now might not be so clever). The Phantom Hourglass is a fully-fledged Zelda game, ingeniously designed to run on the DS. Nine out of ten, rush out and buy it. Really, what on Earth are you waiting for? 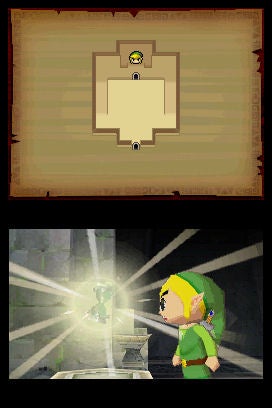 OK. You probably want a few more details. Well, The Phantom Hourglass is actually that rarest of things in the Zelda universe: a proper sequel. Normally, there’s no direct link between one Legend of Zelda and another. Our elfin hero, Link, begins each one as a simple boy and goes on to fulfil his mysterious destiny. Bar the repetition of narrative, visual and musical themes and the constant elements of the classic Zelda game design, nothing ties The Wind Waker to Ocarina of Time or The Twilight Princess to The Wind Waker.


The only real exception to this was Majora’s Mask, a side-story to Ocarina of Time which continued on with the same hero and the same visual style. Well, The Phantom Hourglass has a similar relationship with the Wind Waker. It begins where the Wind Waker ended, with Link and Princess Zelda (in the guise of the Pirate Queen Tetra) abroad on the high seas, in search of adventure. Encountering a mysterious ghost ship, our heroine is spirited away, leaving Link washed up on a small island, and faced with the impossible task of saving her. 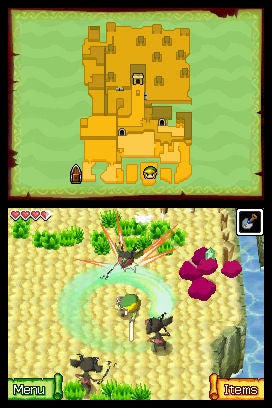 The graphic style also continues, with the Phantom Hourglass sporting a slightly downgraded version of The Wind Waker’s beautiful 3D cel-shading – still one of the great high-points of deliberately non-realistic game graphics. It has the same stylised, big-eyed cartoon characters, the same exuberant swirls of smoke and mist and comes from the same school of creature design, with traditional Zelda favourites given a distinctly Disneyfied spin. It’s a good match for the DS, partly because the cel-shading helps conceal the limitations of the hardware in terms of textures and polygon performance, and partly because someone made the smart decision to keep the camera set at a top-down isometric point of view. This makes the game feel a bit like “A Link to the Past” – no bad thing on a device with a relatively small screen and limited buttons – while the fact that it’s still a 3D engine means it has the flexibility to handle the odd more cinematic scene.

However, what really makes The Phantom Hourglass work is that it hasn’t made the mistake of, say, Super Mario 64 DS and tried to make an existing analogue control system function using touch-screen and buttons – it’s been built from the ground up to use touch-screen controls. Unlike many DS games the action takes place on the lower DS screen, with the upper screen dominated by a real-time map. Touch and hold a point on the screen and Link runs towards it, jumping over obstacles if need be on the way. Tap an enemy and he attacks it with his sword; drag the stylus across your foe and Link deals out a vicious slash. Draw a ring around Link and he does his classic spin-attack. The longer the game goes on, the more sophisticated the controls get. The boomerang, for example, now follows a line you draw on the screen, while bombs can be picked up and thrown at any point within range you can tap on. It’s a brilliant system, and the fact that you rarely need to touch anything except the touch-screen makes it one of the most comfortable and intuitive on the DS. 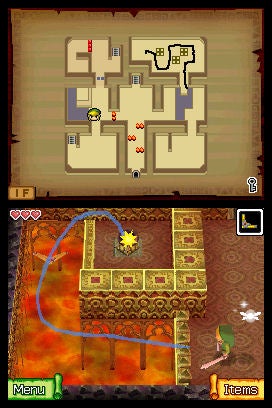 Of course, no DS game can exist without a few gimmicks, and The Phantom Hourglass has its share of blowing, singing and shouting, but this isn’t one of those games where odd controls have been bolted on seemingly for the sake of it (I’m looking at you, Twilight Princess). No, it’s one of those great Nintendo moments where the software and hardware make perfect sense of one another. Even the feature that seems most like a gimmick – the ability to annotate your map – turns out to be genuinely useful. 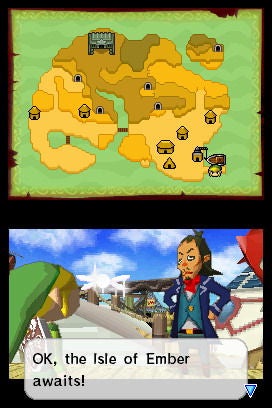 But even with some of the best visuals on the DS and arguably the finest control system, The Phantom Hourglass would still fall flat if it didn’t ‘feel’ like a proper Legend of Zelda. This has always been hard to capture in words. How can games as different in style and presentation as Ocarina of Time, The Wind Waker and The Twilight Princess still have a consistent feel? Why do we love a series of games where so many of the elements and a good portion of the gameplay repeat from one to the next? I guess the answer is that Legend of Zelda always manages to deliver a broadly similar experience, but with enough differences to keep it feeling fresh. It’s an experience of high adventure, with a chunk of epic fantasy, a touch of fairy-tale and a smidgeon of silliness. We don’t just get a game; we get a world to explore and a story that will makes us want to.

And here The Phantom Hourglass delivers more than any handheld Zelda before it. The world is more compact than that of The Wind Waker, let alone Twilight Princess, but if the result is a bit less aimless wandering then that’s hardly a disaster. I know that some of you who hated The Wind Waker’s endless nautical exploration will feel a certain sense of dread when I say that The Phantom Hourglass still involves a lot of ocean travel. However, these stretches rarely last more than ten minutes at a time, and now it’s mostly a case of plotting a course on a map with the stylus, then managing the cannons and helping the ship to jump the occasional barricade. 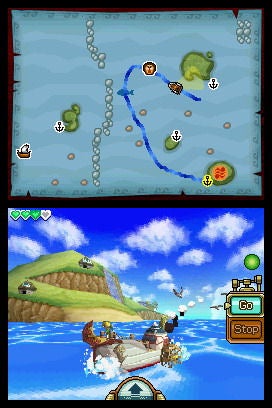 The story, meanwhile, might neither be as epic nor as full as that of Twilight Princess, but like The Wind Waker before it, it makes up for it with a lightness of touch and some enjoyably silly characters. It’s a world you can easily get caught up in, where isolated island communities get on with their odd little lives and where you’ll still be stopped by a flapping messenger boy to take a postal delivery. Is it all a bit primitive in these days of Oblivion and S.T.A.L.K.E.R? Of course. But on a handheld it’s a serious achievement. 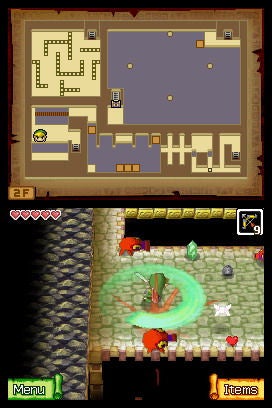 The game also hits a nice balance between exploration and problem-solving and the hardcore dungeon delving that has always been at the heart of the Zelda experience. Fans will already know the score: solve some puzzles or gather some items to find and get into the dungeon, face a mix of deadly traps and fearsome monsters, discover a new useful item, employ that item to grab a boss key, then use it to battle the boss and open up the next avenue of adventure. Admittedly, The Phantom Hourglass has a tendency to make its solutions too obvious, as if fearful that the casual crowd, once stuck, will leave the game for dead, but there are still some great head-scratching puzzles, and some brilliant multi-monster scraps and big boss battles to keep you on your toes.

The game’s biggest downside is that there is only a handful of what you might call proper dungeons. It’s not short at 15 to 20 hours of play, but you don’t get a lot of dungeons for your dollar, and rarely are they as long or difficult as seasoned Zelda veterans might demand. In a way, the game forestalls this criticism by incorporating a central dungeon – the Ocean God’s Temple – which you’re forced to revisit several times. In fact, this is where the titular timepiece comes in; the floors of the temple are filled with a poisonous fog, which you’re only safe from when standing in specific coloured areas, or while golden sand remains in the top of the hourglass. 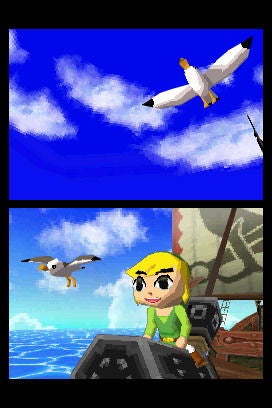 Unfortunately, this idea brings with it some problems of its own. First, while bringing new equipment in does cut down on the amount of old ground you have to traverse on each new visit, it doesn’t cut it out entirely. At times, repeating a chunk of the game for the umpteenth time seems like a cheap way to prolong its lifespan. More seriously, the fact that you might have to get through several floors and solve several puzzles within the time limit means that you often take two or three tries to do the relevant portion of the temple without dying from the effects of the fog – particularly as the temple is also patrolled by indestructible phantoms who knock thirty seconds off the clock each time they batter you. While the stealth gameplay you resort to is relatively well implemented, it’s still a bit of an annoyance. There are times when the Oceans God’s Temple sections threaten to bog down the game as whole.


Luckily, the rest is so exuberant and so constantly engaging that this never happens. Like Ocarina of Time, Twilight Princess or The Wind Waker (at least while Link has his feet on dry land) there is something terribly moreish about The Phantom Hourglass. You’ll tell yourself that you’ll give it a break when you’ve found the dungeon entrance, but that soon becomes “maybe when I’ve got inside” or “perhaps when I’ve found that next bit of kit” or “I’ll just have a quick look at the boss, what’s the harm”. It’s just so hard to stop. And while the collectibles and bonus quests that prolong the lives of console Zeldas are in short supply, there’s enough ship customisation and power-gem collecting to keep you from reaching the credits before you’re quite ready. On a home console this was trouble, but on a handheld it might be disastrous. I for one am glad that I don’t have a daily commute to play this on. I wouldn’t hit my stop again for weeks. 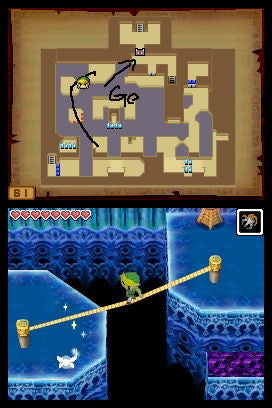 Is The Phantom Hourglass as good a Zelda as Twilight Princess? Not quite. It hasn’t got the scale, the looks or the depth. But when you realise that a game on a handheld can actually stand any comparison to one of last year’s best games on any format, you know that you have something special on your hands. The Phantom Hourglass isn’t perfect, but it’s one of the very finest games on a platform that’s hardly starved of greats. Another classic Zelda, another DS essential. Now rush out and buy it – you’ve already wasted enough time.


The full Zelda experience in beautifully realised handheld form. A must for fans of the series, and one of the richest, deepest, most innovative games on the DS.