The other area where Apple leaves little to be desired is performance. All configurations of the 2012 27in iMac will have ample performance for most users, and there are enough upgrade options that power users shouldn’t be left wanting either, unlike with the 21in model. As ever with Apple products, you do pay for the upgrades, though.

Crucial to this machine’s performance advantage are its storage and graphics card options. By using full-size hard drives (3.5in) rather than laptop size drives (2.5in), hard disk performance is greater than on the 21in model and comparable to a typical desktop PC. Meanwhile the entry level Nvidia 660M graphics card, while hardly rocket-powered, will provide playable framerates on most 3D games.

As for our review system, its £120 graphics card upgrade delivered impressive performance results in our benchmarks, and will easily cope with most modern games (even if you do have to tweak the resolution or some of the graphics settings). We would, however, suggest that this machine’s £160 upgrade to a 3.4GHz CPU isn’t so necessary.

Further upgrade options include a 3TB hard drive, Apple’s so called Fusion drives (which are hard drives with a small portion of flash memory that provides speedy performance for certain core applications) and a 768GB SSD. The latter will offer blistering performance (super-speedy startup times, instant app loads, etc) but for £1,040 it is just a tad pricey.

The new 27in Apple iMac may offer good performance with the right configuration but, as we’ve established, it doesn’t come cheap. Indeed, whatever spec you choose, you can get a PC that will comfortably outperform it for half the price, and that’s including a screen, speakers, keyboard and mouse.

But, of course, it’s only really fair to compare to other all-in-ones where the competition is equally pricey. Rivals such as the Lenovo IdeaCentre A720 offer better screen adjustability, better connectivity, a Blu-ray drive and a touchscreen but doesn’t have quite as many upgrade options, with its graphics options in particular being somewhat lacking, and its screen is only 1920 x 1,200. But, it costs £1200. 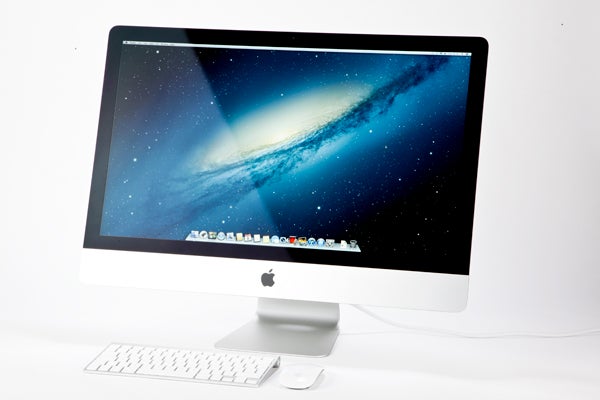 For a bit more money (£1,399), Dell is offering the Dell XPS One 27, which again has better screen adjustability and connectivity, includes a Blu-ray drive and touchscreen, and has an iMac-matching 2,560 x 1,440 screen. Though, again, the graphics card options aren’t quite so good and it doesn’t ship until 18th February 2013.

With those systems and their prices taken into account, the 27in iMac doesn’t look like bad value; it’s pricey but not extortionate.

The 27in Apple iMac 2012 is a bit of a luxury with you paying both a premium for the all-in-one form factor and for the Apple name, build quality and style. However, unlike the 21in iMac, which we felt was a bit underpowered, the 27in model makes a bit more sense. Its screen is large with a high resolution and it has enough grunt to satisfy power users and gamers, making it feel much less like a non-portable laptop (like the 21in model) and more like a viable complete replacement for a powerful desktop PC.

It’s probably overkill for more modest computer users and the most extreme gamers and power users – those that demand their games look the absolute best or spend all day rendering video edits – will find it lacking. But, for the rest of us, it’s a good buy, if you can afford.