We’re not particularly big fans of the default peripherals included with the 27in Apple iMac, but thankfully these can be swapped for better alternatives at the point of ordering at no extra cost.

The keyboard is of the squashed, laptop-style with no numpad and small cursor and Enter keys. On the 21in iMac this smaller style could be forgiven somewhat as it’s arguably a nod to the whole system being quite compact but here with this larger machine there’s little reason to save space and we do miss the extra keys. That said, the key action is surprisingly good and speedy typers shouldn’t have any problem bashing out the words at a reasonable pace. The full-size version with numpad is also optionally available as are multiple language versions. 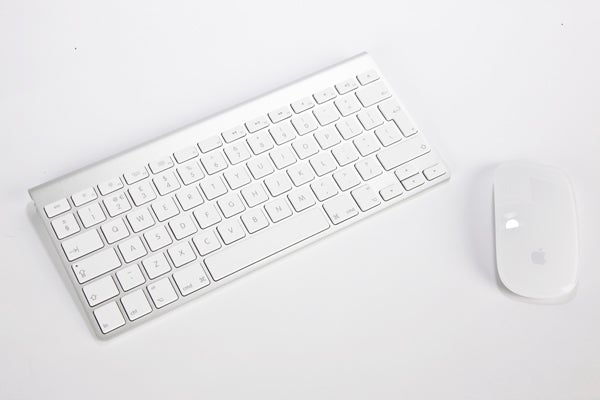 As for the mouse, it’s Apple’s so called Magic Mouse. What makes it magic is that the whole top surface is one touch-sensitive button. This allows you to perform some multi-touch gestures such as four-way scrolling (up/down, left/right), double tap to zoom, swipe back and forth (between webpages in the browser or images in a gallery, for instance) and a two-finger swipe to move between desktops/fullscreen apps. They’re really useful gestures and relatively easy to do but overall the mouse isn’t very comfortable in the hand and its tracking isn’t all that great. Instead of the Magic Mouse we’d recommend opting for the Apple Trackpad (at no extra cost) and buying a decent gaming mouse seperately.

If there’s one area where an all-in-one PC absolutely has to get things right it’s with its display, and thankfully for the most part Apple has done a decent job here. However, again it’s not without issue.

The most obvious omission here is the lack of a Retina resolution. At 27in across and with a resolution of 2,560 x 1,440, you get plenty of screen real estate but not having the option to go to the super-sharp resolutions that iPad, iPhones and MacBooks all now possess is a real shame. Not only does it jar with the rest of the Apple product range but, arguably, it’s here that the high resolution is actually most useful. Certainly for any serious computer users, it’s in front of a big screen like this that serious photo and video editing would take place, and it’s for just those occasions where Retina is so useful. 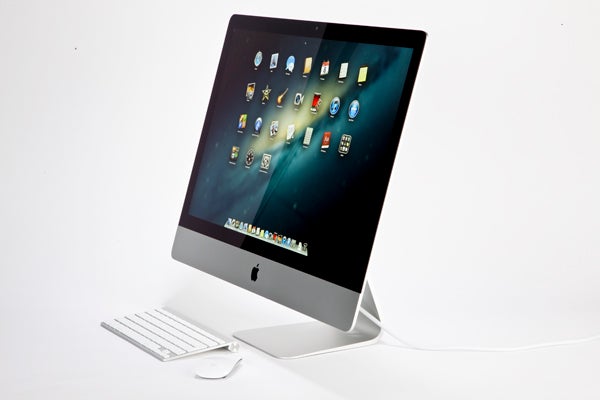 Resolution aside the actual quality of the screen is good but not quite class leading. There’s noticeable light bleed round the edges that is distracting when dark images are on screen. Also dark detailing isn’t quite as good as on the best monitors and there’s quite a bit of contrast shift when viewed from an angle, which results in a washed out, grey look.

All that said, we are nit-picking here, because of the price of this machine. After all, you can buy a truly stellar quality monitor and more powerful PC for far less money than this machine costs, so it really should pass muster on a number of levels to justify its price. In fact, what is offered here by this IPS panel is a good-quality viewing experience with bright, punchy colours, strong contrast levels, reasonable dark detailing, and good viewing angles, putting it on par with a monitor costing around £400 (hardly bargain basement). For slightly better performance (less light bleed and contrast shift) you’ll be looking at spending £550, while for truly critically accurate colours you’ll be looking at spending £800. 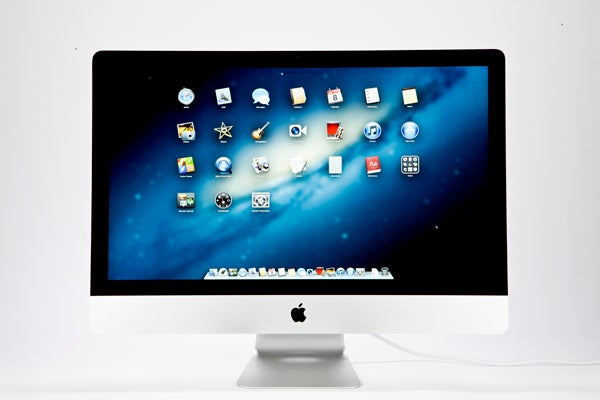 There’s another issue with the screen. While Apple may insist that touch is only for tablets and phones, many other manufacturers are offering touchscreen laptops and all-in-one PCs, not to mention touchscreen monitors too. Here, though, a poke of the display offers nothing more than a smudgey fingerprint. While by no means essential, we have found touch control on PCs and laptops a nice thing to have so it’s a shame not to have it here too.

So the 27in iMac hasn’t entirely convinced as of yet but from here on in it’s all good. For a start, the included speakers are phenomenal. Again, like the 21in model, there’s no extra sub-woofer – either internal or external – but from the stereo speakers hidden inside the chassis Apple has managed to conjure up an astonishingly powerful and pleasing sound. Blockbuster movie action sequences rumble satisfyingly, rock music has real punch and yet there’s clarity and spaciousness to the whole sound. The speakers would struggle to step up to keeping a party rockin’ but for using while sat at a desk or even for sitting back and watching a movie, they’re more than up to the job.

You will get a better sound from getting some separate speakers but you’ll be looking at spending a good £100 to do so.

Previous
Apple iMac 27in (2012) Review Next
Performance and Verdict Review