It's large, curved, and offers good colours and contrast – but the low resolution, lack of features and poor backlight are all issues

The AOC C32G1 is one of the more affordable 32-inch gaming monitors on the market right now with a price of £280. That sounds great on paper, as do its curved design and AMD FreeSync – but do cut backs in other areas prove one too many?

For starters, the AOC deploys a 1920 x 1080 resolution across its 32-inch diagonal. That, to put it mildly, is a double-edged sword.

On a positive note, the resolution is fine for gaming and movies – it delivers enough screen real estate for triple-A titles and eSports games in equal measure.

And, from a technical point of view, the relatively low 1920 x 1080 resolution means that a wider range of graphics cards will be able to run demanding games at playable frame rates. That’s especially important for AMD FreeSync, which peaks on this monitor at 144Hz – because the higher the frame rate goes, the more benefit you’ll get out of AMD’s technology. However… 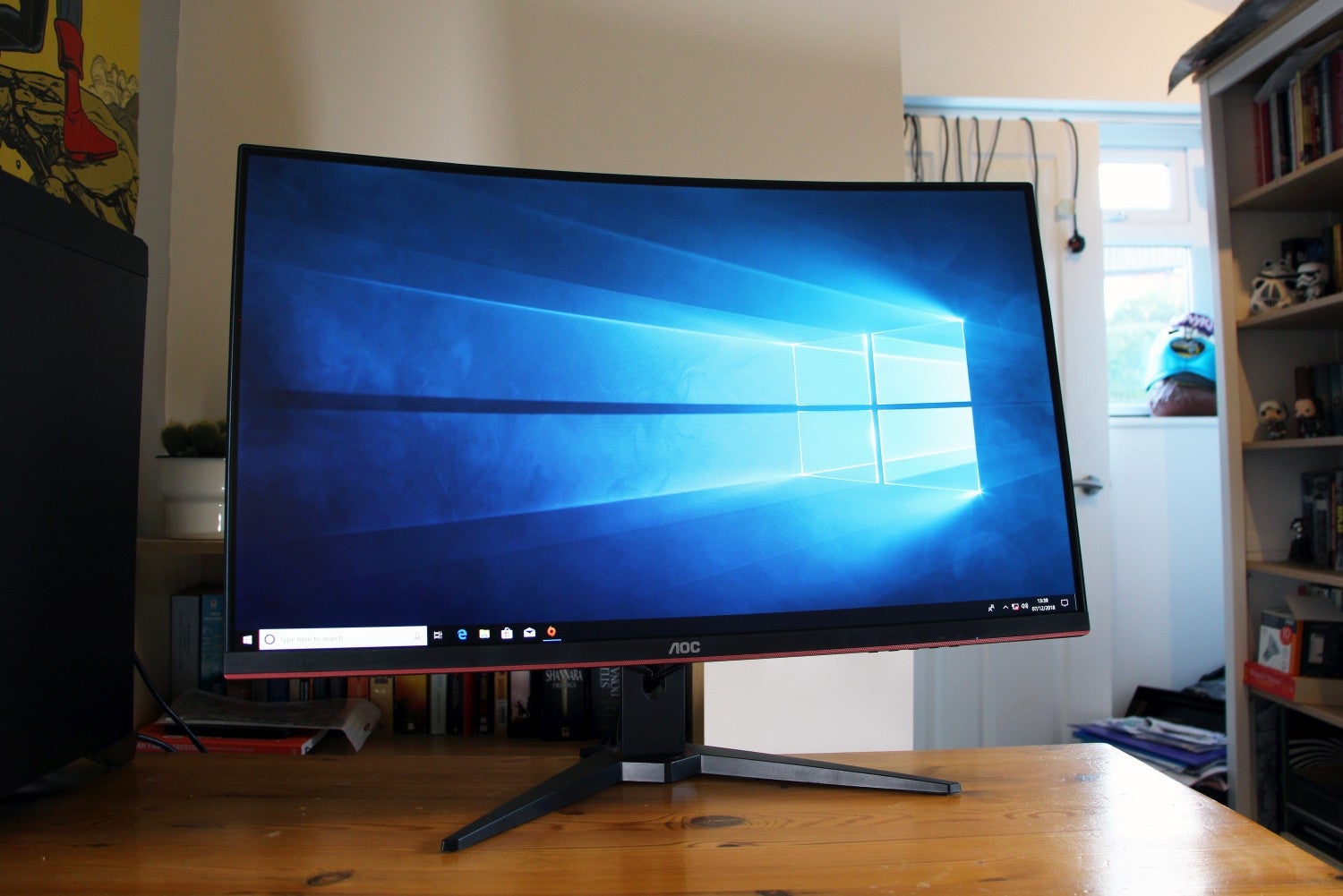 …the Full HD resolution and 32-inch diagonal do mean that the AOC delivers a poor density level of 69ppi. While that’s high enough for gaming, the panel isn’t particularly sharp or crisp; plus it makes it easy to spot pixels.

Smaller screens with similar resolutions offer better levels of density – and, therefore, are sharper. AOC’s own G2790PX now costs £260, and its 1080p resolution and 27-inch diagonal gives it a pixel density of 82ppi. 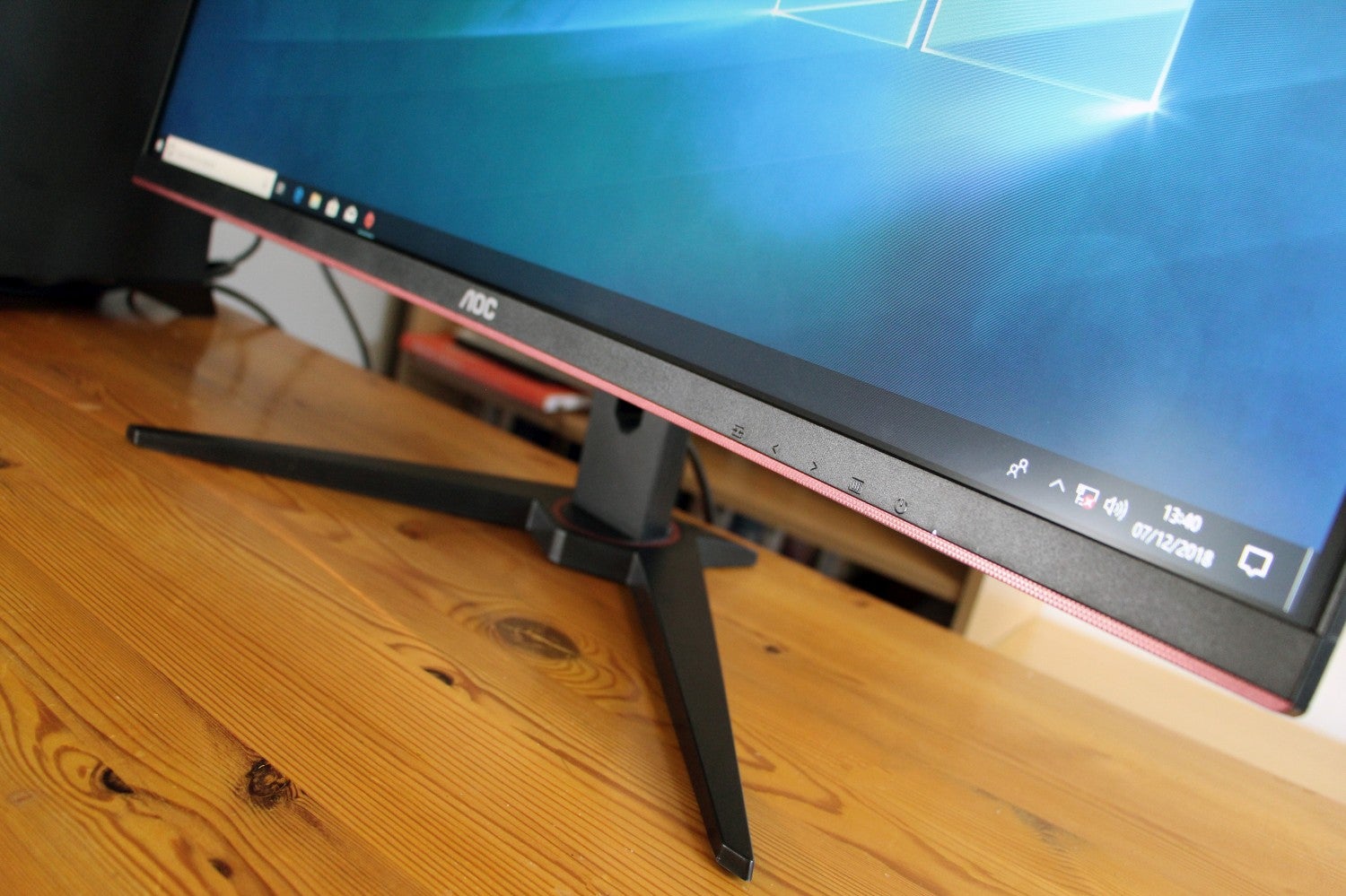 Get beyond the resolution issue and you’ll find a screen with solid gaming credentials. AMD FreeSync works on a range of 48Hz-144Hz using DisplayPort, which means you’ll get butter-smooth gaming across the board. The higher the frame rate, the better though, and the technology only works on AMD graphics cards. If you have an Nvidia GPU, you can use VSync at 144Hz, but not FreeSync.

The underlying panel uses 8-bit VA technology. That hardware provides a good halfway house between the image quality of IPS and the speed of TN, although it doesn’t tend to be as speedy as the latter hardware – so VA is good for mainstream gaming rather than eSports. The AOC G2790PX does have TN hardware.

AOC claims a 1ms response time for this screen, but the firm said the same about its C27G1 screen – and that panel exhibited minor ghosting in particularly fast moments unless overdrive settings were employed. That’s the kind of thing I wouldn’t want to see, especially for eSports.

And, as usual with AOC’s current crop of gaming monitors, the C32G1 has a gently curving design. The 1800R radius has a minor impact on gaming immersion without distorting images – something that the pricier BenQ also offers. 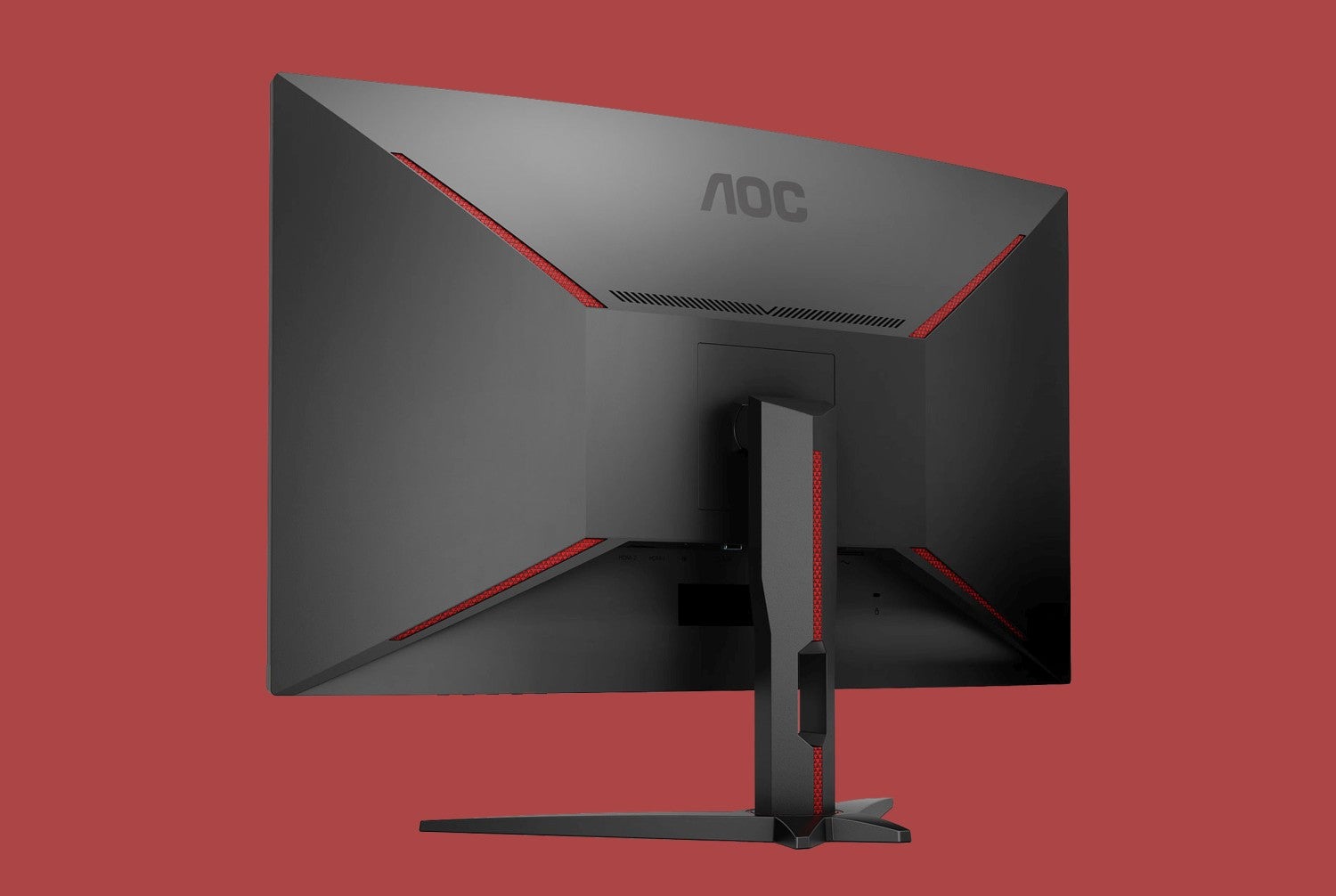 The curve isn’t the G32G1’s only bit of familiar physical design. The monitor has narrow bezels on three sides of the screen, and most of the display is built from matte black plastic. The bottom of the screen, the rear and the base are augmented with red accents, but they’re not intrusive. The AOC does look like a gaming screen, but it isn’t what we’d call ostentatious.

Around the rear of the screen are two HDMI 1.4 connections and a single DisplayPort 1.2 input. There’s also a D-SUB connection for older hardware, plus a headphone jack.

Those ports face downwards, though, which makes plugging in a little tricky. But that’s your lot for connectivity – there are no USB ports on this screen, and no speakers. There are no headphone hooks or handles.

The AOC’s connectivity is a little basic then, with no USB and few extra gaming features. That’s fine if all you want is a basic panel, but the BenQ was a little better thanks to the inclusion of USB. The AOC G2790PX had more USB ports, and speakers.

The AOC has a familiar and easy setup routine. The stand snaps into the back of the panel without the need for any screws, and the base attaches with a single screw.

The screen’s build quality is decent, with hardly any give in the plastic panels. The base is sturdy, too, despite it being slim plastic legs. Sadly, though, the join between screen and stand isn’t as good. This leaves the screen itself a little wobbly when compared to the smaller AOC panels. That’s no surprise when AOC uses the same stand design across all three products.

The AOC’s stand can swivel from side-to-side and can tilt forwards or backwards, and it’s compatible with 100mm VESA mounts. That’s it for adjustment, though – unlike AOC’s smaller screens and the 32in BenQ panel, you can’t alter the C32G1’s height. 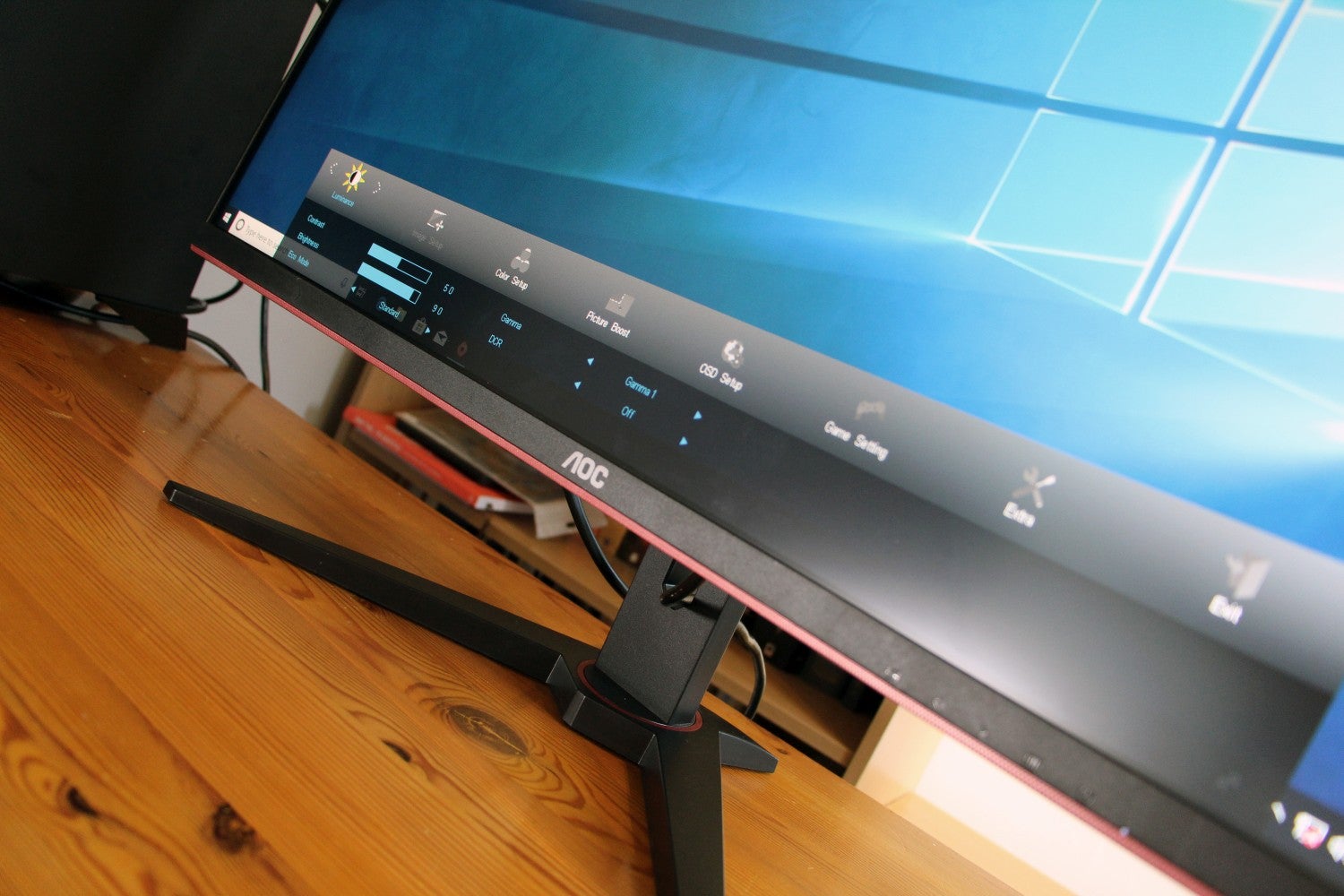 The OSD is sensibly organised, but it’s huge and isn’t particularly fast.

At least the AOC only weighs just under 7kg. This isn’t bad for a 32-inch screen – the BenQ tipped the scales at 8.1kg.

The C32G1 is managed by the usual AOC on-screen display. It stretches across the bottom half of the screen, and is navigated via a row of buttons beneath the bottom bezel. It’s sensibly organised, with the usual options in their usual spots, but its size is annoying – and it can’t be moved around the screen, either. It’s also pretty slow compared to many other OSD systems.

The C32G1’s image quality is reasonable, but not spectacular. It’s also hindered by a couple of significant problems.

The factory black level of 0.04 nits is a good starting point – it ensures you’ll get rich shades when the screen is dealing with darker colours. It contributes to a contrast level of 5825:1, which is far better than any rival. It means that you’ll see superb breadth of colour and an impressive depth of tone on this screen. It’s even better than the HDR-enabled BenQ, which topped out at a still-superb 2,850:1.

It’s a shame, then, that the AOC’s fantastic black and contrast levels are undermined by a poor brightness measurement of 233 nits. That’s low for a gaming screen these days – the smaller AOC C27G1 hit 265 nits, which was still poor, and the BenQ EX3203R delivered a stonking level of 399 nits. The AOC G2790PX hit 373 nits.

That poor brightness figure leaves the screen looking a little dim, which in part undermines those superb contrast figures – it means all of that depth and those vibrant shades won’t be shown off at their best. 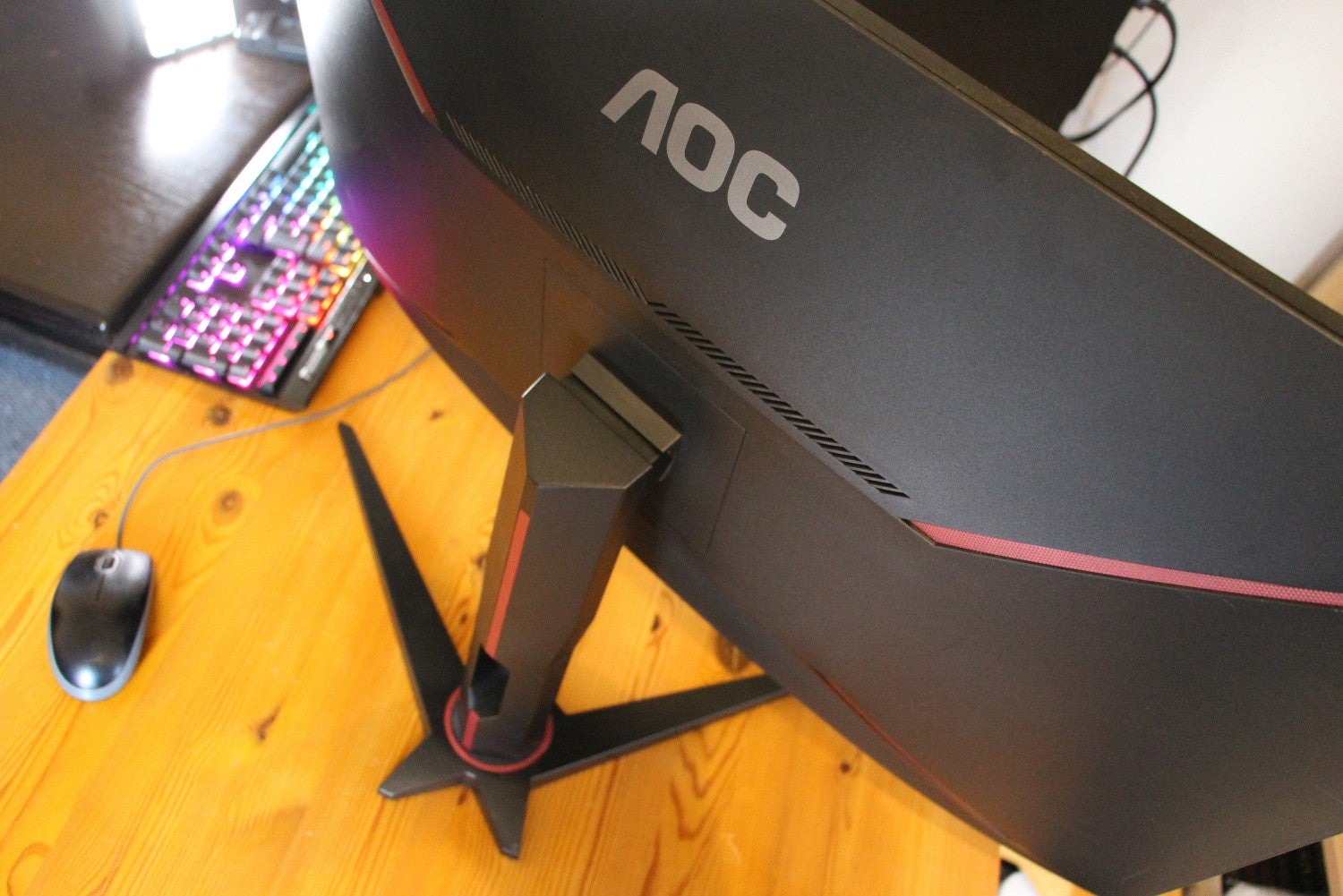 This larger panel has tilting and swivelling, but no height adjustment

The poor brightness has a practical impact, too. The backlight is certainly still strong enough for most rooms and more situations, but you’ll struggle if you’re playing in a particularly bright room. The screen may look a little washed out because it doesn’t have the strength to combat strong lighting. It also means you get less versatility for altering the brightness to suit your tastes.

Elsewhere, the C32G1 delivers impressive colour quality. Its factory temperature of 6624K is excellent, and the Delta E of 2.07 is good. The average gamma of 2.26 is solid, too, and the screen’s sRGB coverage level of 98.8% is absolutely fine.

All of these results are better than the AOC C27G1. They’re all ahead of the BenQ, too, and they trade blows with the AOC G2790PX.

The colours are easily good enough for all sorts of games, and the contrast and black levels are great. Other gaming features work well: AMD FreeSync delivered smooth, flawless gaming, and the C32G1’s input lag figure of 12.2ms is so good that the human eye can’t tell the difference.

The VA panel does have a tiny bit of visible ghosting in the fastest games. Only the keenest eSports players will notice this, but it’s a moot point – they’ll have TN panels if they’re serious about competition. For the rest of us, AOC’s overdrive options virtually eradicate the ghosting. 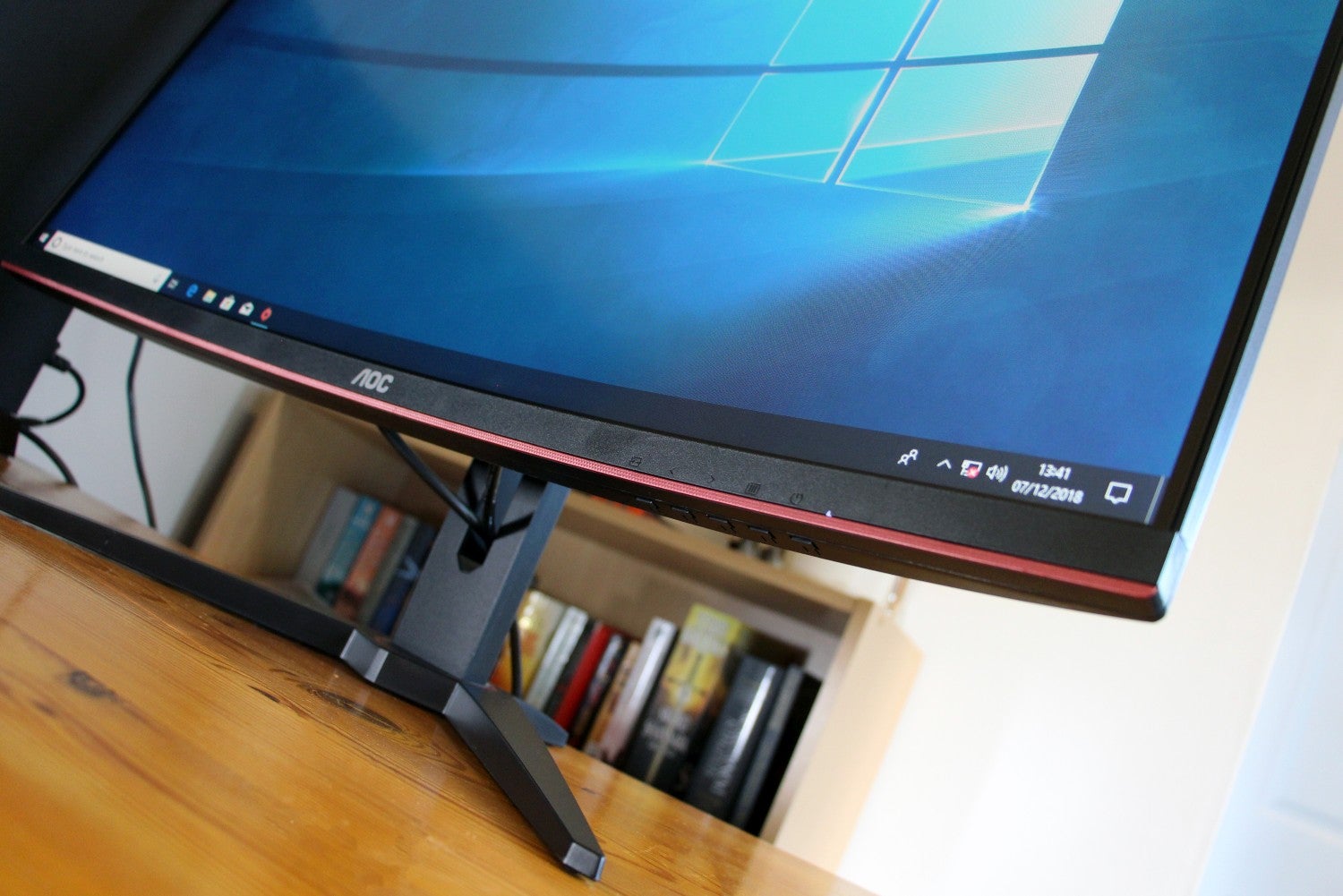 Buttons below the bottom bezel are used to navigate the OSD

Uniformity levels are only mediocre, meanwhile, with a decent deviation of just 7% along the top edge but a 14% deviation at the bottom. This is poorer than the smaller AOC panel and the BenQ. The backlight bleeds into the panel a little bit, too, although that’s only visible when the screen is dominated by static, black images.

Finally, we can’t recommend AOC’s usual FPS, RTS and racing screen modes. The FPS option ramps up the colour temperature to make the screen look far chillier while massively dropping the brightness – and therefore ruining the contrast. It’s dark, dingy and disappointing. The RTS mode makes the Delta E and contrast worse when compared to factory settings, and the racing option suffers similarly.

The AOC C32G1 delivers good colour accuracy, stonking contrast and a reasonable design that matches the rest of AOC’s recent gaming monitors. Combined with its reasonable price, it serves as a solid option for mainstream gaming – especially thanks to AMD FreeSync and its curved design.

It does come with several caveats, though, which stop it achieving a better score. The 1080p resolution and 32-inch diagonal means that this screen isn’t particularly sharp, and it’s missing some features – such as USB ports and height adjustment.

The backlight is dim, which impacts this screen’s versatility and will result in the screen losing punch when playing beneath bright lights.

That won’t impact everyone, however, and the AOC does deliver good quality inside a tempting design. You’ll find a greater number of pixels and a brighter screen elsewhere, but the C32G1 is a large and decent mainstream gaming screen.

The AOC C32G1 is a good mainstream gaming screen thanks to its great colour accuracy and contrast, plus the inclusion of AMD FreeSync and a curved design only improve its gaming credentials. But be aware of its limitations.