The G2790PX is a AOC’s new smart-looking gaming monitor. The 27-inch display boasts a 144Hz refresh rate, a 1ms response time and FreeSync. However, its appeal is less about its raw gaming performance and more its design.

The gaming sibling to the Q2790PQU, it sports the same narrow-bezelled styling that immediately gives it more desk appeal than alternatives. You also get a few extras, such as a fully adjustable stand, speakers, a four-port USB hub and plenty of video connections.

However, despite having a premium £290 asking price – and unlike the Q2790PQU – this display has a resolution of only 1080p, making it very much a basic gaming display in terms of raw specs.

This is possibly one of the nicest-looking gaming displays you can buy. The key is the super-narrow bezel, or the illusion of one. Like most such displays, the bezel is actually wider than it appears, extending underneath the front pane of plastic that also makes up the display panel. 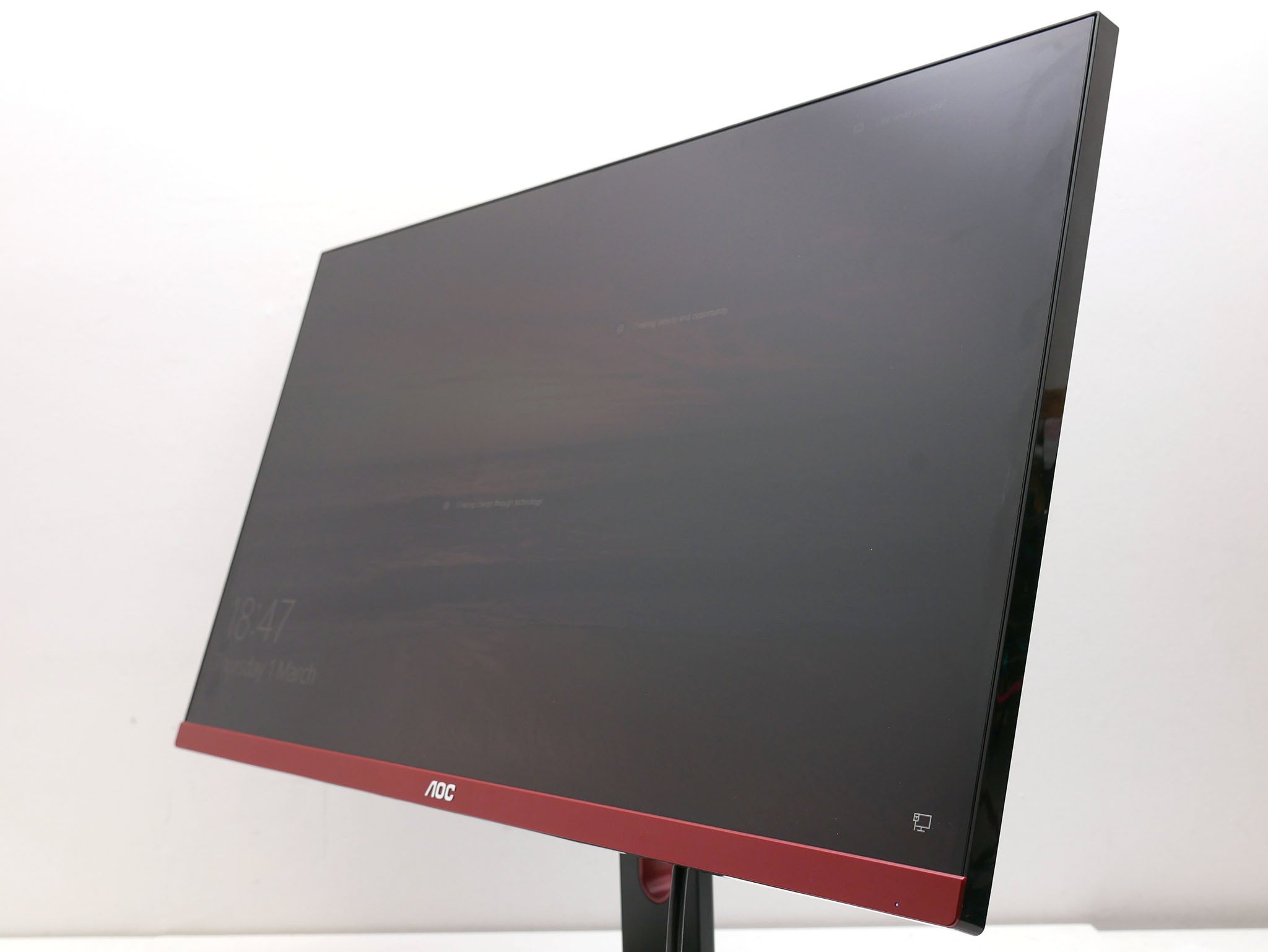 The effect it creates when off is to make it appear that there’s just a tiny 2mm sliver of plastic round the edge. When on, the true width of the bezel is revealed. Nonetheless, it’s a trick that works, making this a very sleek-looking monitor.

It’s not just the bezel that elevates the panel’s overall look; the classy styling throughout contributes too. The only nod to a more classic “gamer” styling is the red colour of the bottom bezel, plus the cable routing hole in the stand. But even here AOC has chosen a darker, metallic tone that works well.

AOC hasn’t slipped up when it comes to more practical considerations either. The stand offers the full range of adjustments, with 130mm of height movement, -3.5-19.5 degrees of tilt, 360 degrees of rotation, and it can pivot into a portrait orientation – which, if nothing else, makes it super-easy to plug in any cables. 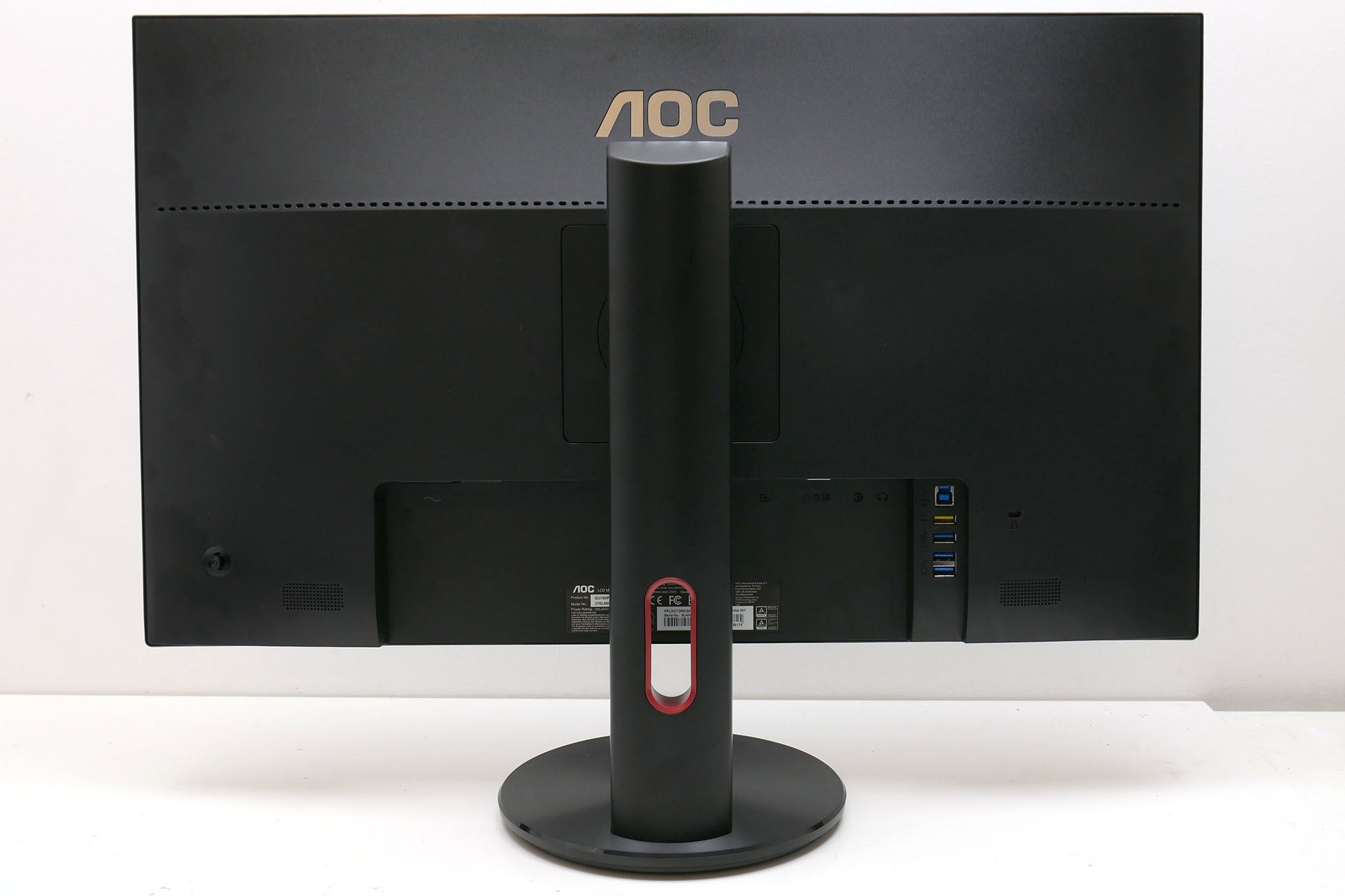 The stand is attached via a simple quick-release mechanism, so unlike AOC’s other displays, you won’t need a screwdriver to get it setup. Beneath the quick-release system are screw holes for a 100 x 100mm VESA mount, meaning you can use an alternative stand instead.

Connectivity is ample. There’s a single DisplayPort 1.2, two HDMI 1.4 and a D-SUB for VGA connections. The latter is decidedly outdated, but could be useful if hooking up older games consoles or the like.

There’s also a four-port USB 3.0 hub, with one of the ports offering the ability to provide power when the monitor is in standby. It would have been better had a couple of these ports been positioned on the side – as they are on the AOC AG251FZ – for easier access. You also miss out on the flip-down headphone stand of that model.

Round the back are jack sockets for headphones and a microphone, plus a pair of speakers. In a rare turn of events, AOC has chosen to perforate the back of the display above these speakers, clearly marking out their position. All too often the speakers in monitors are hidden away, with sound emanating out from wherever it can. Not that this makes much difference to the sound quality – it’s decidedly average.

As for the display itself, it offers a fairly basic list of features for a gaming monitor. It’s a TN LCD panel that refreshes at 144Hz and that has a 1ms response time. The only extra feature of note is FreeSync. There’s none of the backlight strobing, 240Hz refresh rate, or HDR of more expensive displays. 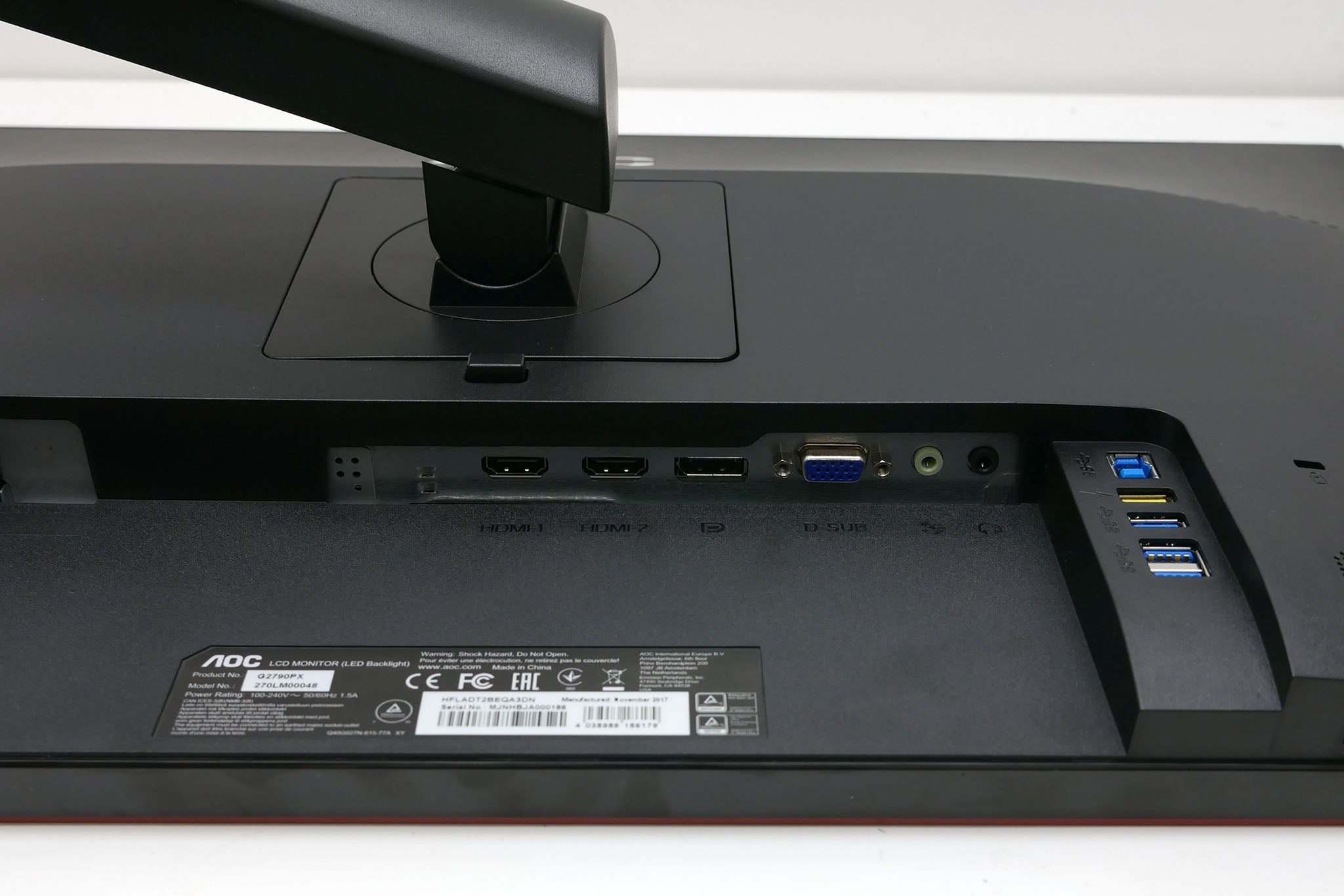 Thanks to its quick-release stand, the G2790PX is super-easy to put together. In addition, being able to pivot it into a portrait mode makes getting all your cables plugged in a cinch too.

However, when it comes to tweaking the display’s settings using its on-screen display (OSD), it’s less accomplished.
It uses a mini-joystick on the back of the display to control navigation of the OSD – and, physically, it works fine. But the way it’s used in correspondence with the menus shown on-screen is decidedly unintuitive. Sometimes you press in the joystick to select something; other times you simply tap down. On occasion, you press up to exit an option; or you press the joystick in.

You’ll get the hang of it eventually, but it’s odd that AOC can’t nail such a seemingly simple task.

Thankfully, the menu options themselves are fine, including an ample selection of all the key options without ever becoming overwhelming.

You get five top-level menu items that consist of Luminance, Color Setup, Gaming, OSD Setup and Extra – and, sure enough, their names correspond nicely with their functionality.

Luminance lets you adjust brightness, contrast and gamma. Color Setup provides a range of colour presets, plus the option to manually tweak the colour balance. Gaming has an overdrive setting – a Game Color setting that’s basically a colour saturation boost, plus there are a range of gaming presets that aren’t worth bothering with. OSD Setup lets you move the menu, change its transparency and adjust its timeout, and you’ll also find the volume control for the speakershere.

The last menu is Extra, which has just one feature: a bizarre thing called BrightFrame. It lets you create a rectangle of any size and anywhere on the screen, whose brightness and contrast you can adjust independently of the rest of the image. We’re yet to fathom a use for it.

All told, it’s easy to jump into these options and tweak the few basics settings you’ll need, such as reducing the brightness a little, cranking up the overdrive setting, and selecting a colour profile you like.