What is the Anki Cozmo?

Imagine if Wall-E had tank tracks and could fit in the palm of your hand. That’s Cozmo. And you’ll love him.

From the makers of the groundbreaking Anki Overdrive racing game, Cozmo is a super-smart and utterly adorable tabletop rover who wants to play and be looked after. He also pushes the boundaries of what to expect from robotics in this price range. 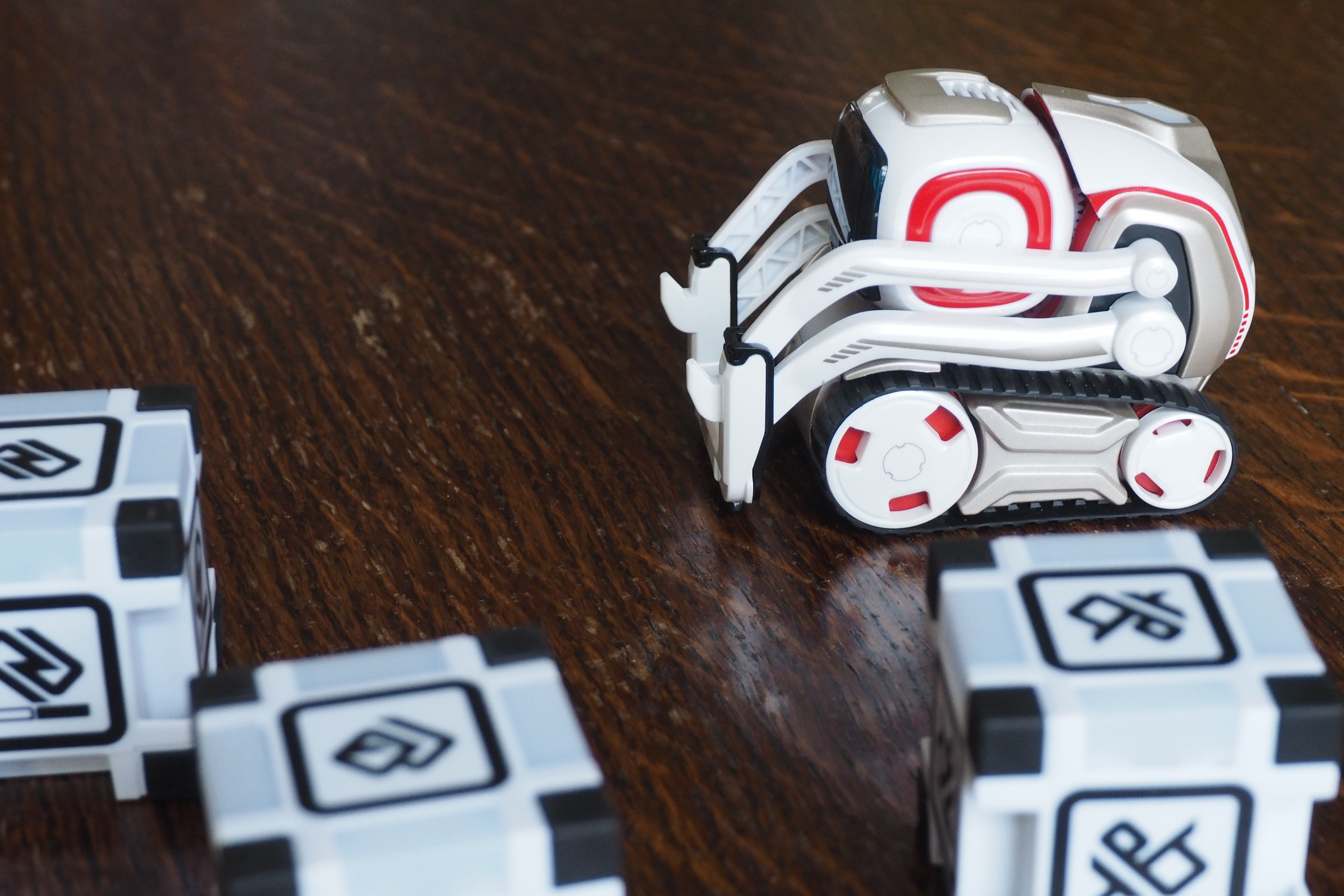 Anki Cozmo – What do you get?

I’ll admit I was surprised when I unpacked Cozmo. He’s so ickle. Just like I did, you’ll probably be sceptical about how clever such a teensy robot can really be.

From front to back he’s 10cm long, then 7cm tall and 5.5cm wide. Pretty much pocketable, although you’re best off treating a delicate piece of robotics a lot more carefully. There’s a dedicated carry case available if you want to transport the little fella around.

The design is also curious, with tank tracks and a funny forklift/bulldozer attachment at the front, making him look something out of a Bob the Builder spin-off set on the moon. “Come on, team. We need to get this lunar base built before Mr Bentley arrives, but we’ve run out of ceramic tiles and Cozmo dropped my titanium nuts in the Sea of Tranquility.” 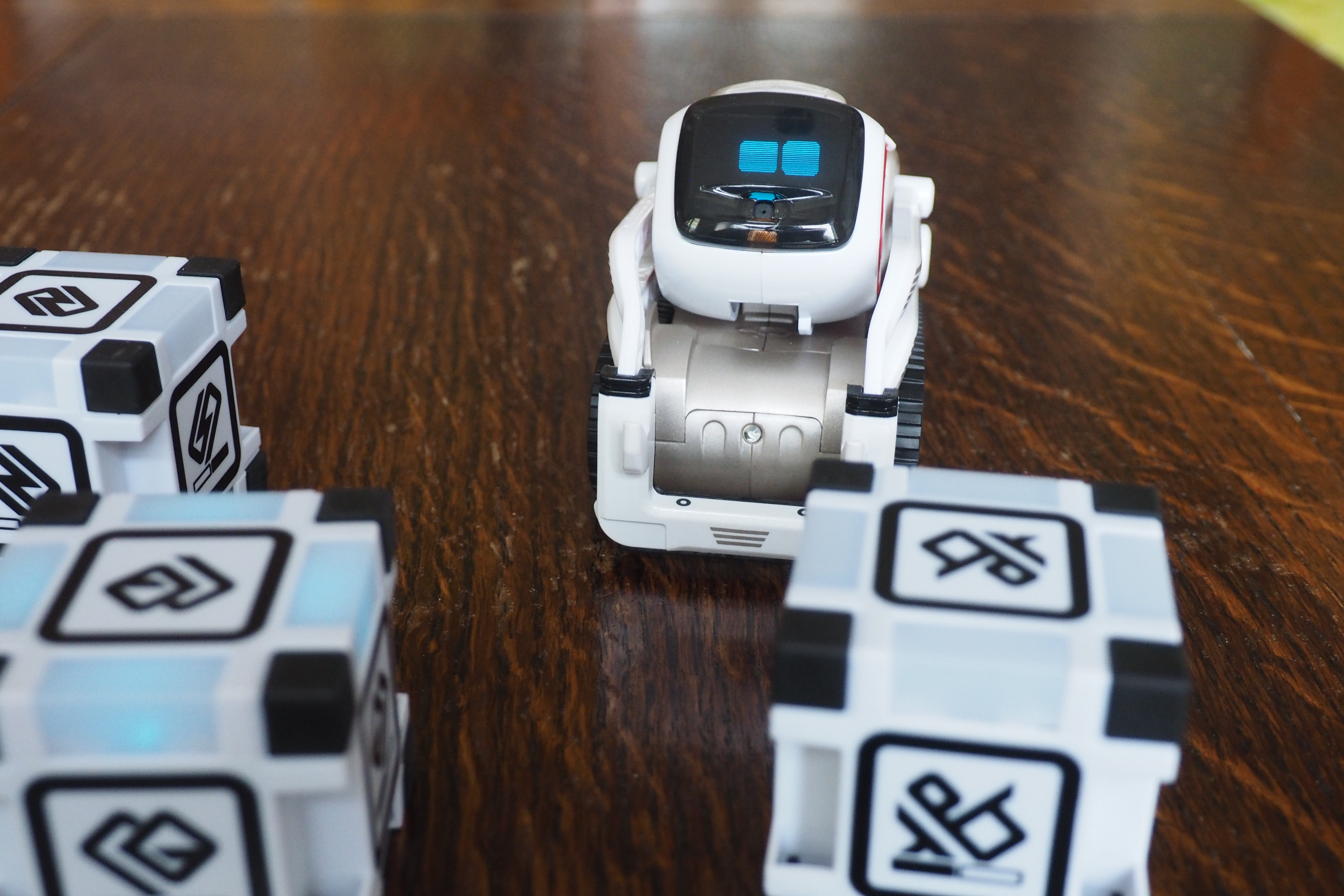 Adding to this cutesy charm is a 128 x 64-pixel screen that displays and animates Cozmo’s cartoonish eyes, as well as a motorised head that can angle up and down.

The head also houses a VGA 30fps camera, while there are sensors built into the front and underside of the body. Contacts on the bottom enable Cozmo to be placed in his supplied charging cradle, which in turn connects via USB.

But the key to much of your interactivity with your new robo-buddy is the three smart cubes that come with him. These are plastic blocks with four multicolour LEDS mounted around the edges of one side. 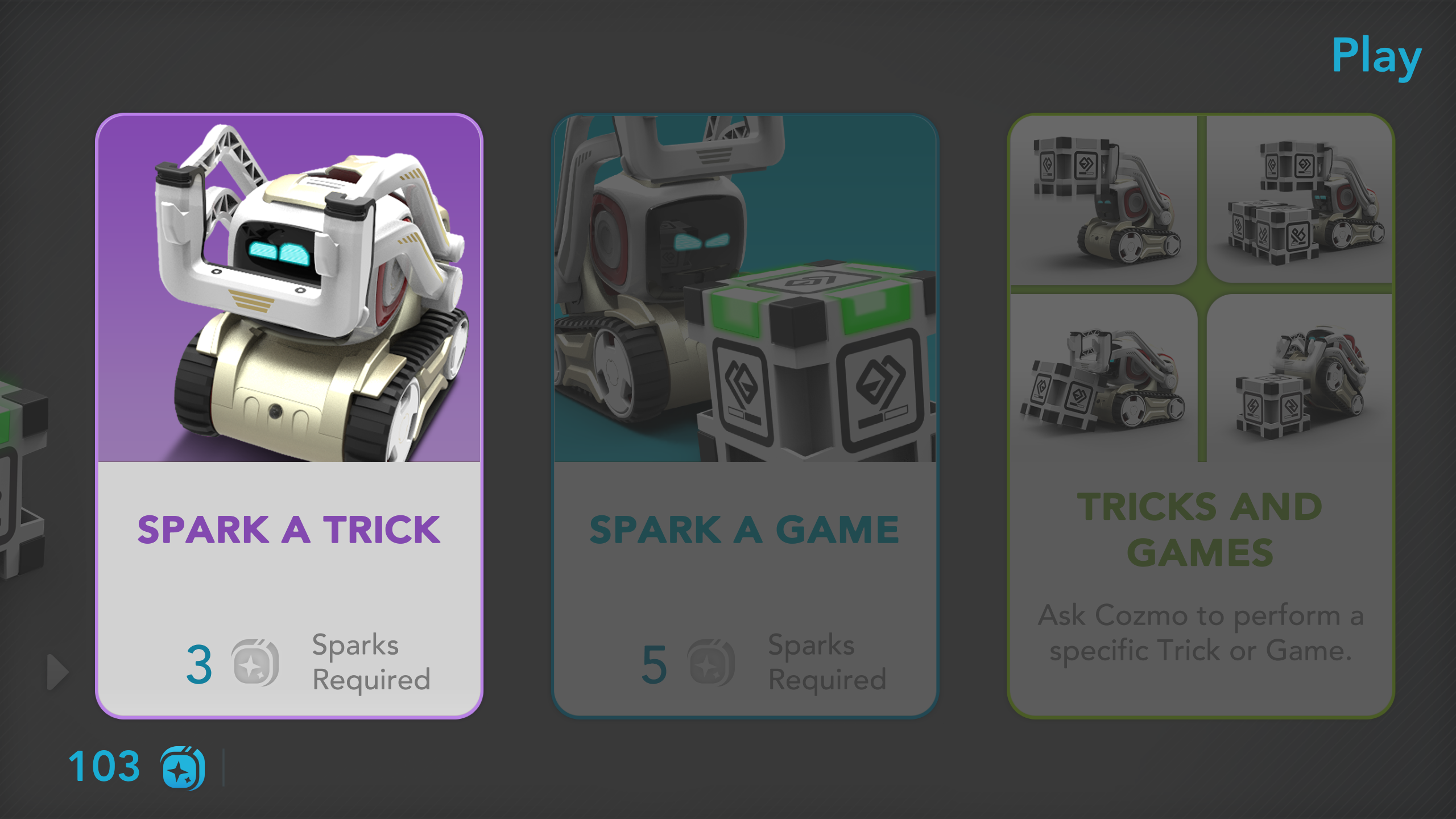 Then there’s the app (for Android/iOS), which is Cozmo’s control centre, from where you’ll give him a health check-up, learn how to interact with him, and unlock new skills. Rather than Bluetooth, he uses Wi-Fi to connect to your mobile device – Cozmo creates his own hotspot. This is a little annoying, as it means you need to disconnect from your internet Wi-Fi connection while using him, and it’s also a tiny bit fiddly when he requires a firmware update, so you have to jump back to your internet connection for the download.

Anki Cozmo – How fun is it to use?

With Cozmo charged and the app downloaded, it’s time to find out if your new plastic pal really is fun to be with. Well, the first bit isn’t that fun, as you need to connect to his Wi-Fi using a long passkey that appears on his screen. But that’s only the first time you use him. 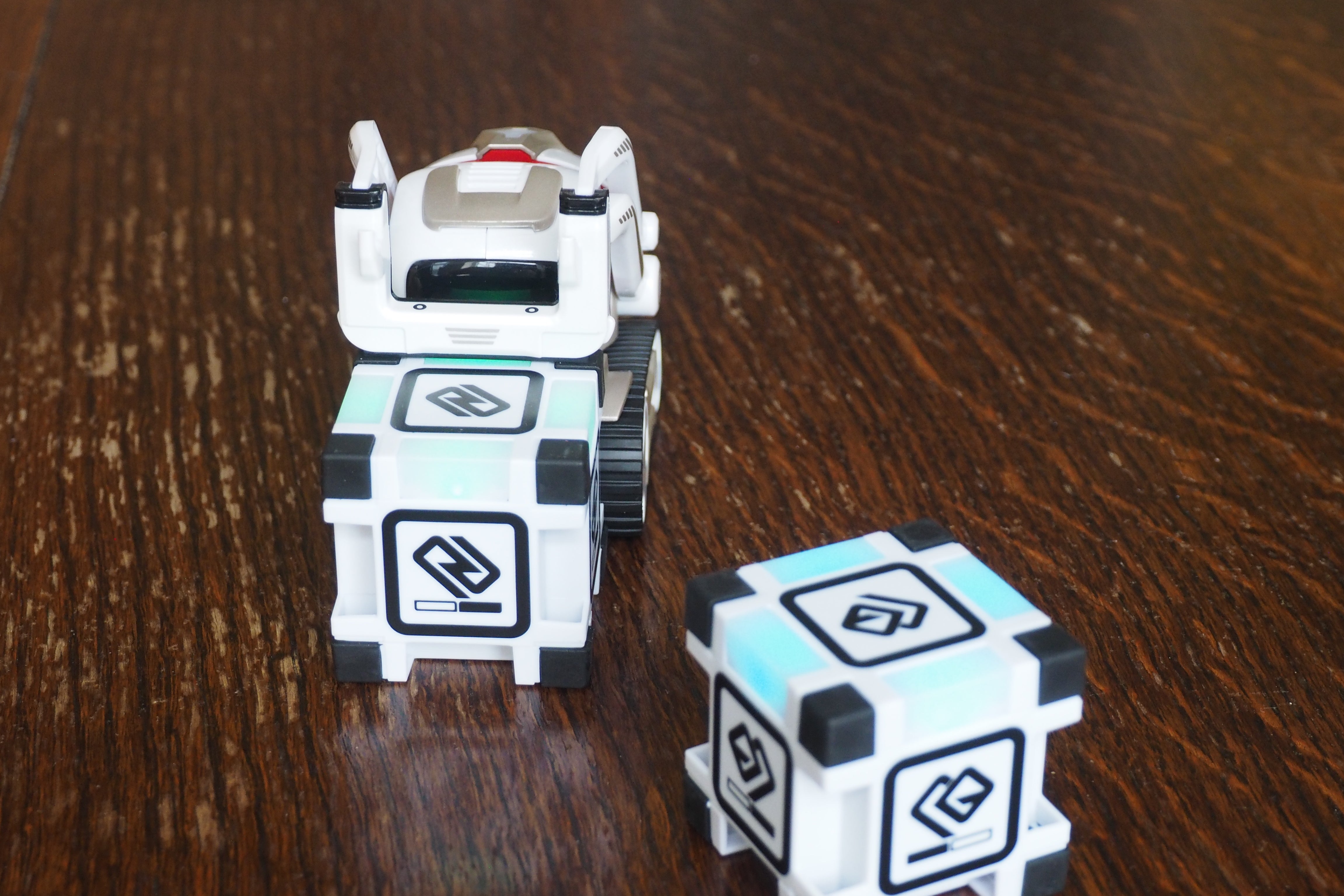 The super-slick app explains that you need to place Cozmo on a clear tabletop with plenty of space. Oh, and you’re told that, although he should be smart enough to stop himself falling off the edge, you should keep an eye out in case he needs saving from a fatal dive.

I’ll admit I was besotted with the crazy little droid from the moment he came to life and those little animated eyes started glancing around. The first thing you’re asked to do is get him to recognise you, so enter your name in the app and let him look you up and down for a bit. When his facial recognition’s got you locked in, he’ll say your name in his weird Wall-E-esque voice. It’s adorable.

You can add a huge number of people to Cozmo’s memory, too. This is, however, one of the few cases where I found he stumbled. He repeatedly mistook my son and daughter for the same person, despite their three-year age gap, different gender, the fact that they don’t really look alike… Perhaps an upgrade to a more hi-res camera than just VGA is in order.

As expressive as little Cozmo is, the app is really how you communicate with him, and it also features nice, clear instructional videos for each function. Next thing on the setup agenda is to play your first game with Cozmo, which is called Quick Tap.

Quick Tap is basically a version of Snap. You need to place a cube in front of Cozmo and another next to it, in front of you. The LEDs on both cubes light up, and if their colours match, you need to tap your cube before Cozmo does. If you beat him and get better, there are more difficult levels with multiple colours on each cube. It’s surprisingly addictive, and Cozmo is pretty quick. It’s a nice touch that he also gets it wrong sometimes. There are other games that you’ll learn to play with Cozmo, all equally fun and compelling. But he doesn’t always need telling what to do; leave him to his own devices and he’ll happily roll or stack the cubes, or start humming a familiar song. He’ll even set up a game on his own, which you’d better play with him or face his disappointment. 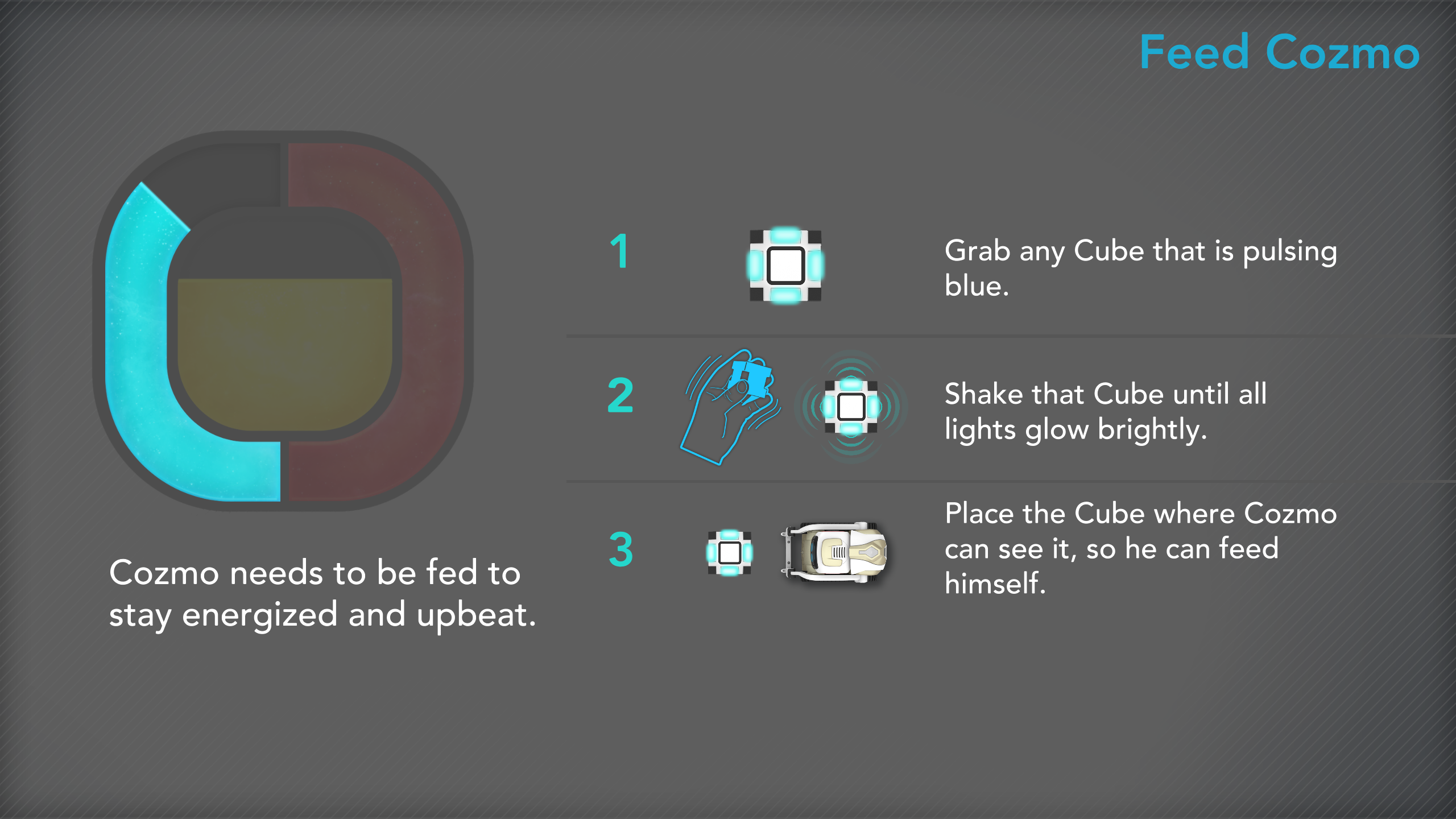 You’ll also have some maintenance to do. No, not like that – put your mini screwdrivers and book on advanced robotics away. You’ll just occasionally need to calibrate his lift or his tracks, by completing a sequence within the app. Cozmo’s energy also drops, so you have to ‘feed’ him by shaking a cube until it glows brightly and then placing it in front of your ravenous robot so he can have a munch.

It’s all ridiculously cute, and the character that’s been bestowed upon Cozmo is incredible. From the wonderfully animated eye expressions to the excellent noises and the way he’ll raise his lift and do a victory lap if he wins a game, it’s all beautifully done.

Eventually you’ll unlock an Explorer mode, which displays Cozmo’s vision on your mobile device while you drive him around the place. Then there’s a programming mode which enables you to set a sequence of steps for Cozmo to follow – although that kind of thing’s never as fun as you hope it’ll be. 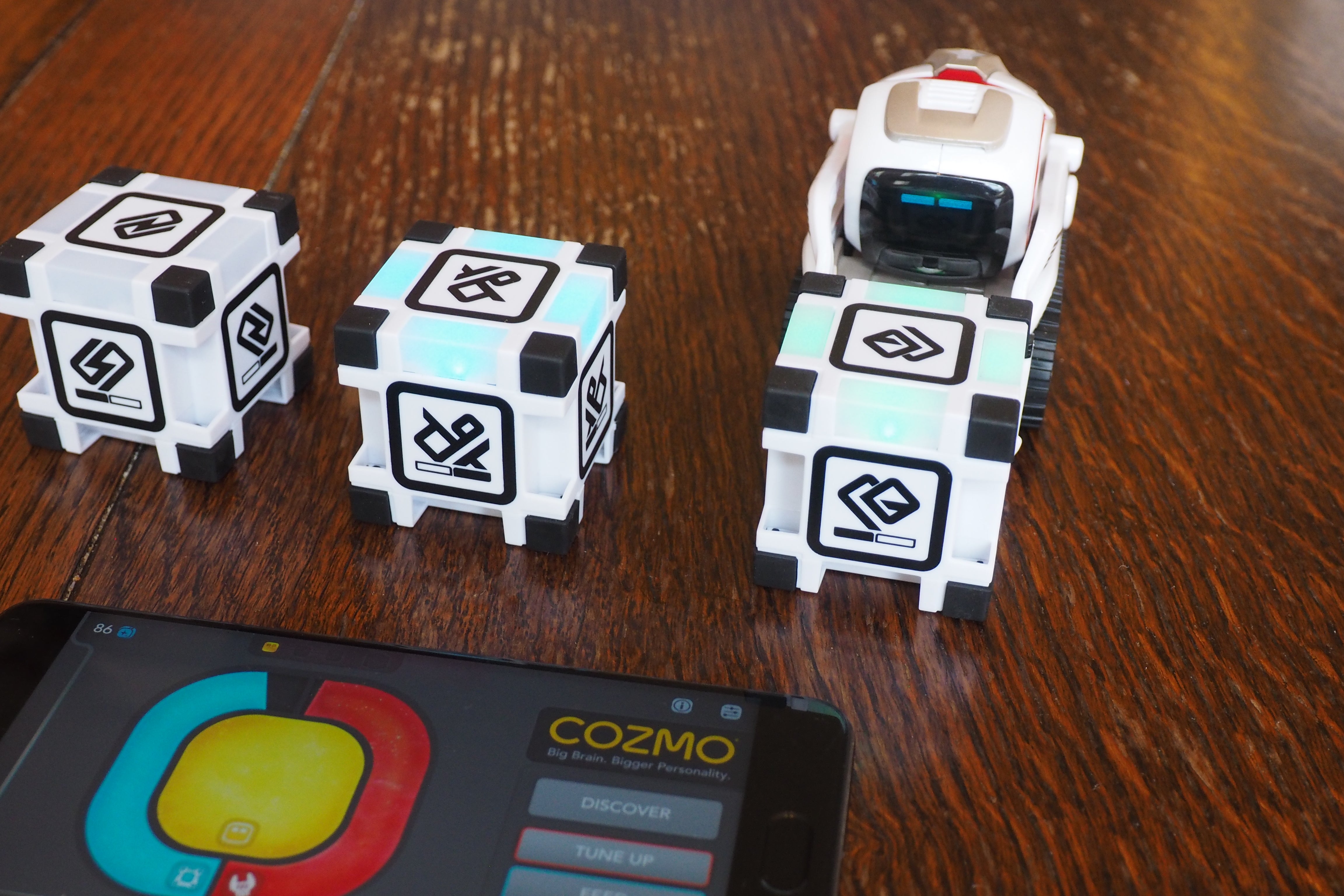 Anki has a good track record with Overdrive for updating its app and firmware to enable more features, so I’ve no doubt Cozmo’s repertoire will expand over time.

For someone who grew up on Short Circuit, Forbidden Planet, Black Hole and every other movie with a zany robot companion, I’ve been constantly disappointed over the years by every consumer robot. Even the most expensive ones, such as Sony’s AIBO robot dog and the ZMP Nuvo, are gathering dust in my loft. Cozmo feels like a real step forward, though, despite its heavy reliance on an app.

If Sony had kept the AIBO project alive long enough to inject this much fun and character into those robot dogs, we’d all have owned one by now. 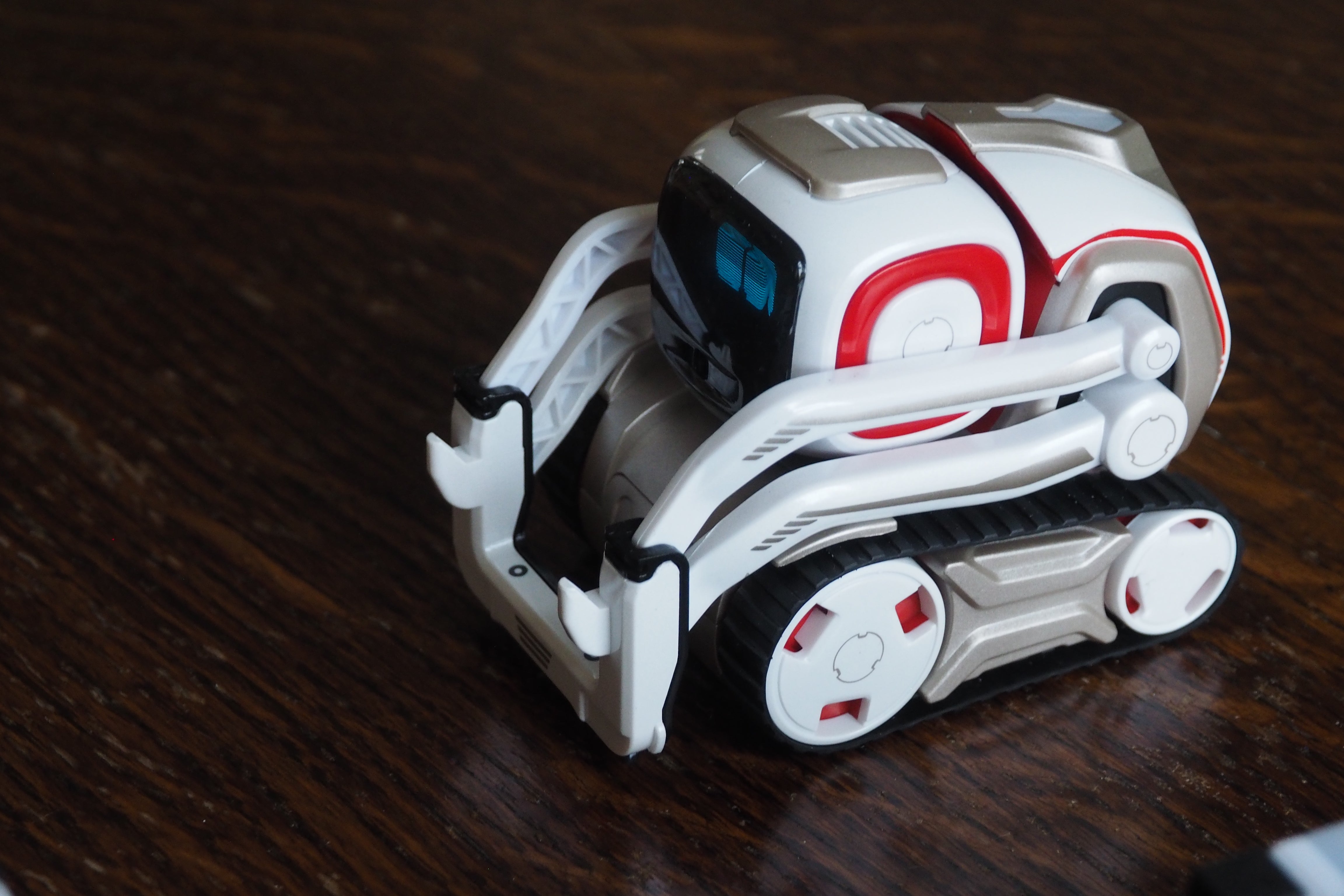 Should I buy the Anki Cozmo?

This is a seriously clever, fun robot. If you want your kids to take a break from virtual worlds on consoles and tablets, this is a fantastic compromise that will get them playing physical games that test their reactions and memory.

There are hours of play to be had here, as well as genuinely charming robotic companionship. If you don’t fall for Cozmo, you’re probably not human.

Possibly the best robot companion so far. Certainly the most adorable.