What is Anki Overdrive?

This is slot-racing for the modern generation, with app control and, well, no slots. It’s also about so much more than racing, with virtual weaponry for disabling your opponents and earning cash to upgrade your vehicle.

Since we first reviewed Anki Overdrive back in 2015, it’s been through a lot of changes. It’s evolved – not just through software updates but in a load of additional hardware too.

Anki Overdrive – What do you get?

The starter kit comes with a couple of cars and 10 pieces of track – four straights, six right-angle curves and a pair of risers – and from this you can build eight layouts. Additional track pieces, including jump sections, banked corners and crossings, are available separately. Putting the track together is made super-simple, as each end is loaded with magnets instead of fiddly fasteners.

Then all you need to do is download the app, charge the cars on the supplied charging plate, and get on with some racing.

A maximum of four cars can be raced on the Overdrive track at one time. If you’ve got enough friends and each has a mobile device, you can race head-to-head. But even if you’re on your lonesome, you can control one car and set up to three others as robotic AI opponents. 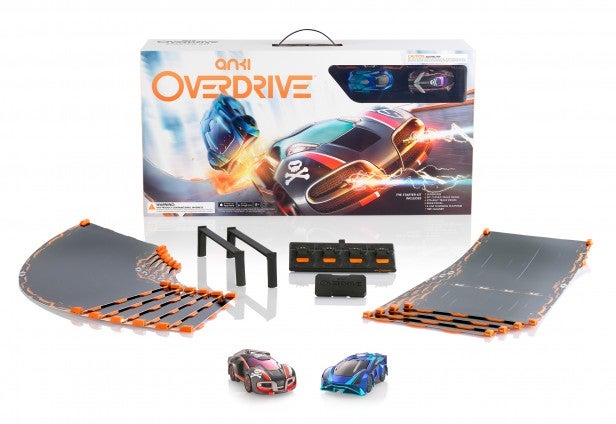 The two starter kit rides are Skull and GroundShock, each of which has its own strengths and weaknesses. These vehicles have infrared sensors underneath them, so they can scan the track layout and know where they are at any given time. Originally the cars had to scan the course before every single race, but thankfully Anki has updated the software so they only have to do it again if you change track layout.

There are now quite a few extra vehicles you can buy, mostly made up from the Supercar range (£49.99/$49.99 each): Nuke, Nuke Phantom, Thermo, Guardian, and Big Bang. Then there are a handful of lorries, called Supertrucks (£59.99/$59.99): X52, X52 ICE, and Freewheel. Supertrucks add a new dimension because they can’t take every corner at full speed or they topple over, so you need to manage them more carefully. They also enable you to try the Takeover mode – but more on that later.

Don’t expect super-realism from any of the models, though. These are definitely more toylike than most traditional slot-cars – although on the plus side they’ll happily take on-track collision after collision without a scratch.

The final part of the system is the control app, which is available for iOS, Android and Amazon’s Fire OS. It’s super-slick and been refined nicely over the years to offer new features. From here you can choose to race or battle, and whether you want single-player action or to join a friend for multiplayer. 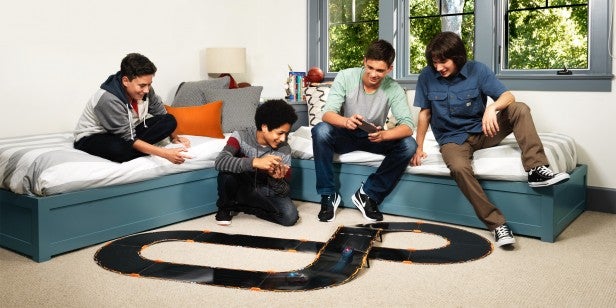 Anki Overdrive – How fun is it to play?

Once the race starts, you use the on-screen controls for throttle, brake, and – in the case of a battle – to unleash your firepower. Tilt left or right to change lanes.

As you fire a weapon you’ll see the car lights flash, while if you get hit your phone or tablet vibrates and your brake lights flash. The shots deplete your car’s energy levels, which when empty cause you to temporarily stall.

The enemy cars’ AI is excellent, with them changing lanes to avoid a hit, and trying to get away from you or get in behind.

In addition to weaponry there are other special items, such as a tractor beam, which lets you slow down enemy cars. The mechanics are great, and the whole experience is amazingly compelling.

Standard races are pretty much the old-school slot-racing experience you’d expect, albeit with the fun of easily switching lanes and even rubbing up against another car’s bumper. The Battle mode tasks you to take down an opponent a preset number of times to win. Then there’s a superb King of the Hill mode, which is a kind of digital tag where you have to evade your opponent for a cumulative number of seconds.

The Takeover mode requires one of the Supertrucks, and you have to hit it enough times that you get to take control of it and start disabling the other cars – whoever’s driving the Supertruck is the only one who can score points.

The app also gives you a sense of progress, rewarding you with cash at the end of each challenge or race. This can be used for upgrades that include weaponry, special items, speed boosts, weapon ports and more – it’s an exhaustive list of kit.

The more you play with ANKI the the tougher your car gets, and so do the AI opponents. It’s utterly addictive, and hugely impressive.

Since launch, Anki has also added a couple of modifiers – called Balance Cars and One Shot – that can be executed in open play.

In Balance Cars, all upgrades are removed from each driver, placing everyone on an equal footing. This is great for when friends pop over who haven’t played before.

The One Shot modifier gives each player and their driver a ‘golden gun’, which, with a single well-aimed shot, can take out an opponent in an instant. This ramps the intensity level up a treat. 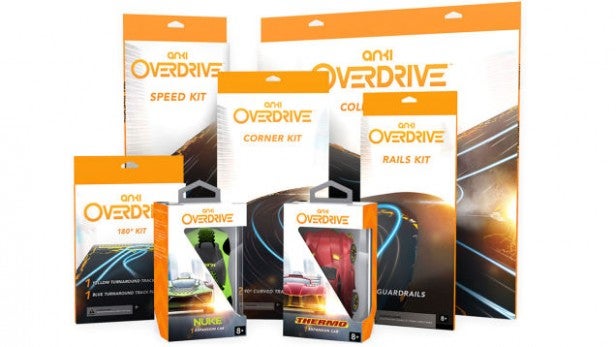 Should I buy ANKI Overdrive

The claims of this being a video game in real life may sound lofty, but this is exactly what you’re getting. If you think this is just slot-racing smartified, you’re doing it a huge injustice. There’s so much variety in here, and the expansions that have been made available since launch have taken it to a whole new level.

The only problem is that you’ll get so addicted that you’ll want to keep building bigger tracks and want all the vehicles – and that lot doesn’t come cheap.

A great game that brings the joy of Scalextric into the digital age – and throws in a whole new world of Mad Max fun.