Anki Overdrive has been one of our favourite toys of the past few years. It’s basically slot-racing but without the need for slots. And it’s app-controlled. Oh, and you can ‘shoot’ your rivals, virtually upgrade your vehicle, and play single-player against AI-driven robot cars. So it’s more like supercharged slot-racing (then fitted with a mini-gun and given a wax’n’polish).

This edition is themed around the Fast & Furious movies, with new cars and a flashy version of the app that enables you to race Dom, Hobbs and the rest of the gang.

It’s the same awesome Overdrive action, but with added character and a new track piece. 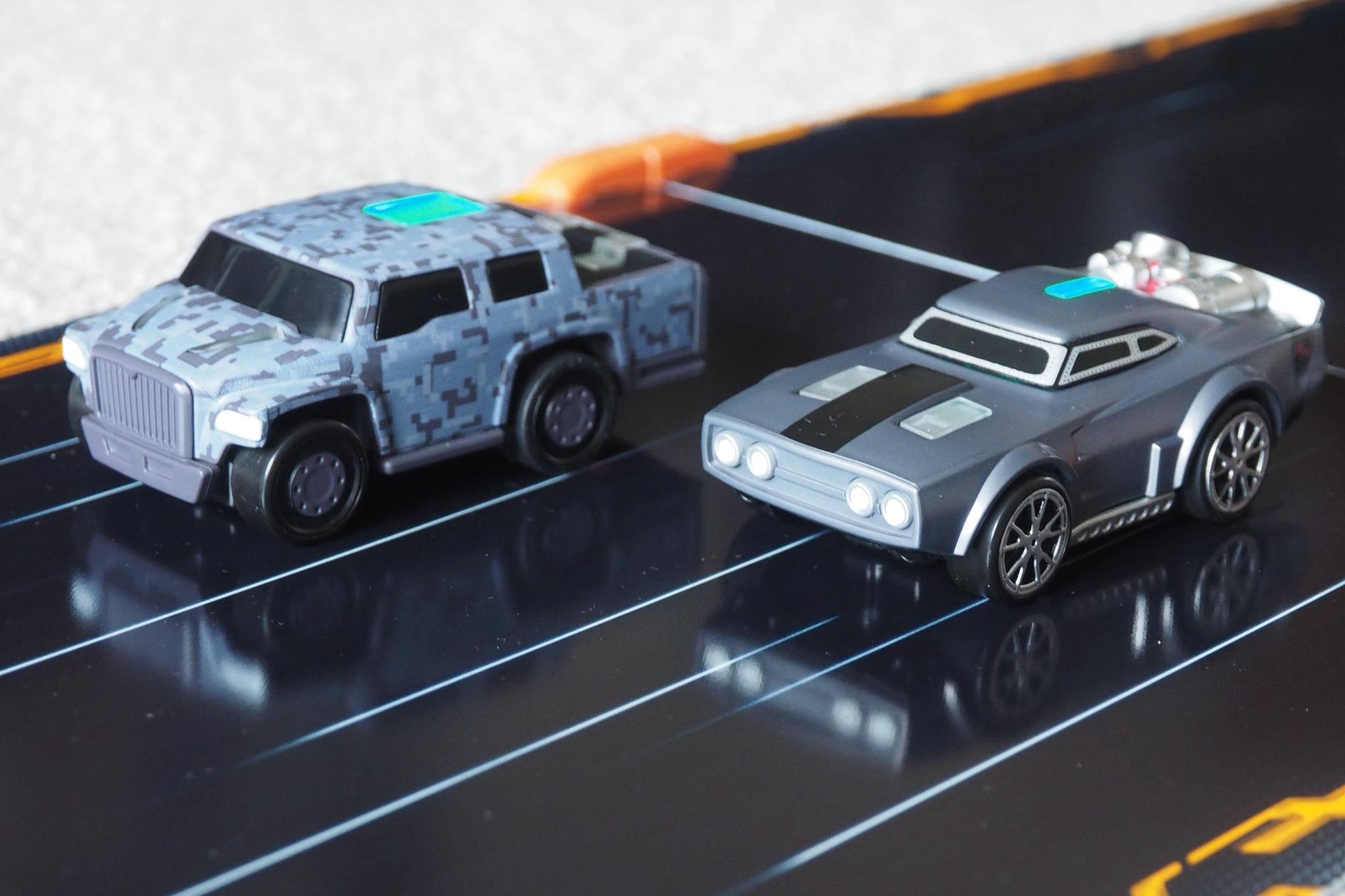 Anki Overdrive: Fast & Furious Edition – What do you get?

The track supplied in the Fast & Furious Edition is almost the same as in the standard starter set. You get four straights (including one with a start-finish line), six 90-degree corners with guard rails, and a pair of track risers so you can make a figure-of-eight course. One of the straights in this set has a new ‘Power Zone’, however. More on that later.

There are eight different track layouts you can make, and they’re all clearly illustrated on the box. Obviously, if you want to go bigger and better, Anki sells expansion sets that range from a pair of extra straights or corners, right up to a 23-piece mega-bundle. Between those extremes are wacky things such as a jump set, a crossing, and a kit to make banked turns. 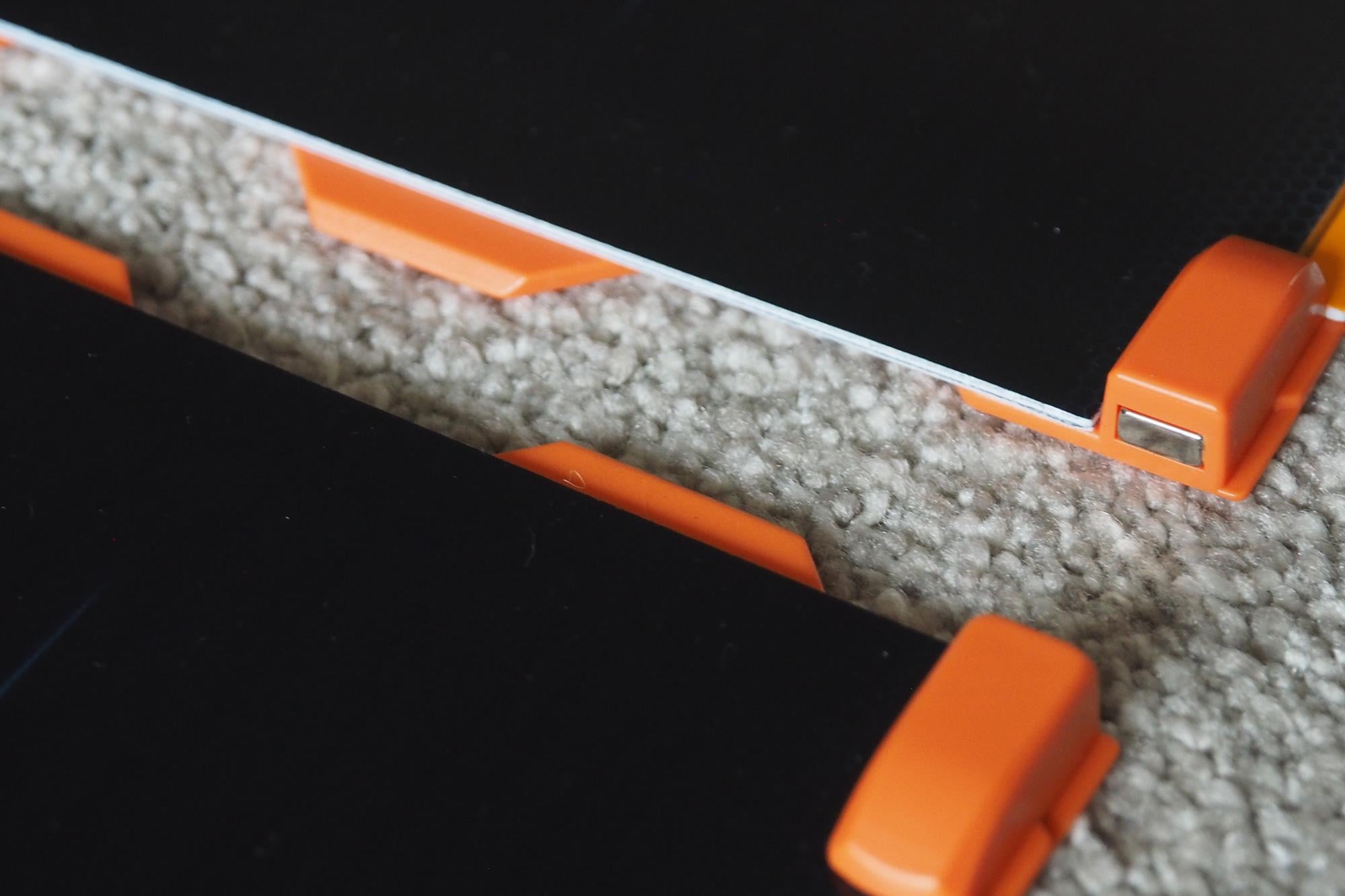 The track itself is vinyl sheet with a couple of magnets at each end to join it together. Pulling it apart and building a different course takes a matter of seconds; it’s ridiculously easy. Having grown up with a monster Scalextric set, getting sore fingers from snapping it all together and not really wanting to change it once it was up and running, Anki Overdrive has been a revelation.

The two vehicles that come in the box are Dom’s Ice Charger and Hobbs’ International MXT truck, which will be familiar to fans of the Fast & Furious movies. They’ve been reimagined in a similar vein to Anki’s other vehicles, so they’re quite toy-like and verging on cartoonish – more Hot Wheels than Scalextric. Kids won’t mind, but big kids such as myself might prefer something a little more realistic. On the plus side, there’s nothing that can snap off if one goes flying over the side of a table. 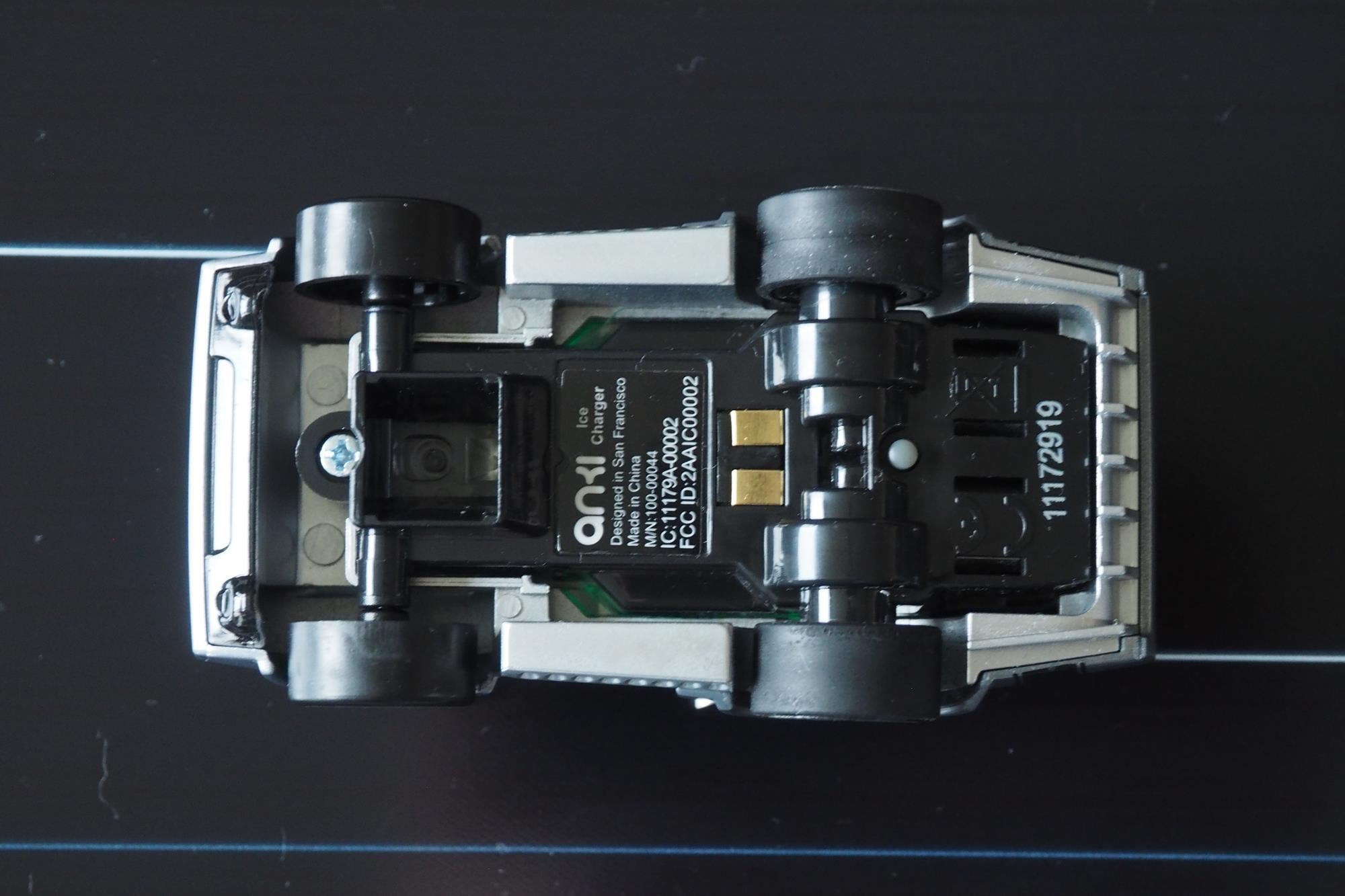 Turn the vehicles over, though, and you see where all the smarts are. There’s an infrared sensor and a pair of charging contacts. The reason for the latter is pretty obvious: these cars have rechargeable batteries, so they don’t draw power from the track in the way of a traditional slot car.

The IR sensor is the other half of that slot-scrapping equation, since it means each vehicle can constantly scan infrared encoding patterns on the track to determine where it is, rather than needing to be guided by a slot. This also means you can just change lanes in Anki Overdrive whenever you want to, and be in the same lane as another player, rubbing bumpers. And as we all know, rubbin’ is racin’. 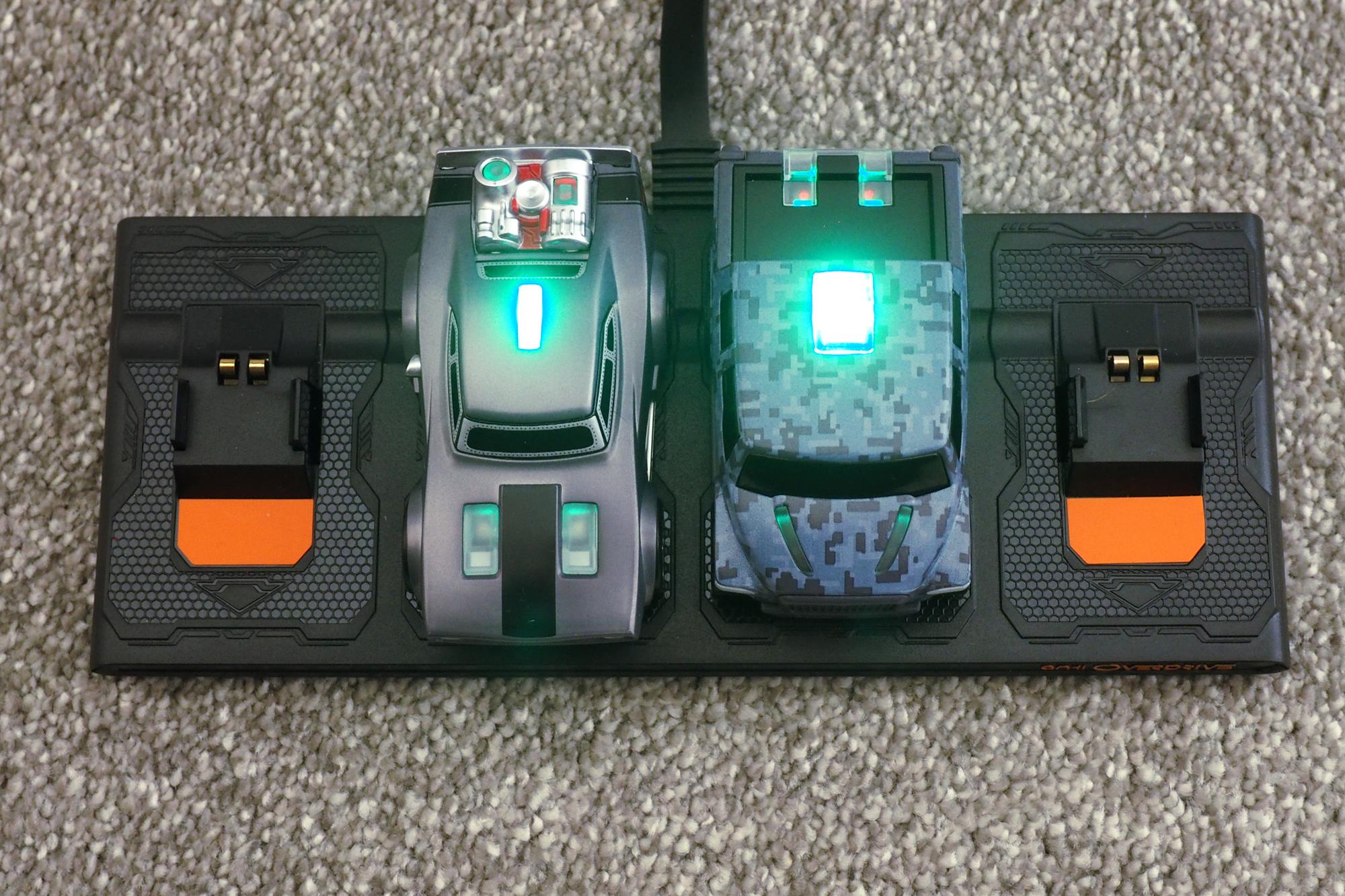 There’s room to charge four vehicles, but you can buy extra charging plates to accommodate an expanding garage

Also included in the box is a charging plate that can fuel up four vehicles at once. It has a USB connector, but there’s a mains adapter supplied, too. Lastly, there’s a tyre cleaner for keeping your rubber sticky.

Times being what they are, control of the cars is achieved via a phone or tablet and a Bluetooth connection. The app is available for iOS, Android and Amazon’s Fire OS – and it’s a themed version of the standard Anki Overdrive app, featuring challenges against characters from the Fast & Furious movies. However, you can use the standard app if you’ve already racked up a load of cash and unlocked features; the Ice Charger and International MXT will appear in either version of the app, as will the effects of the new Power Zone straight. 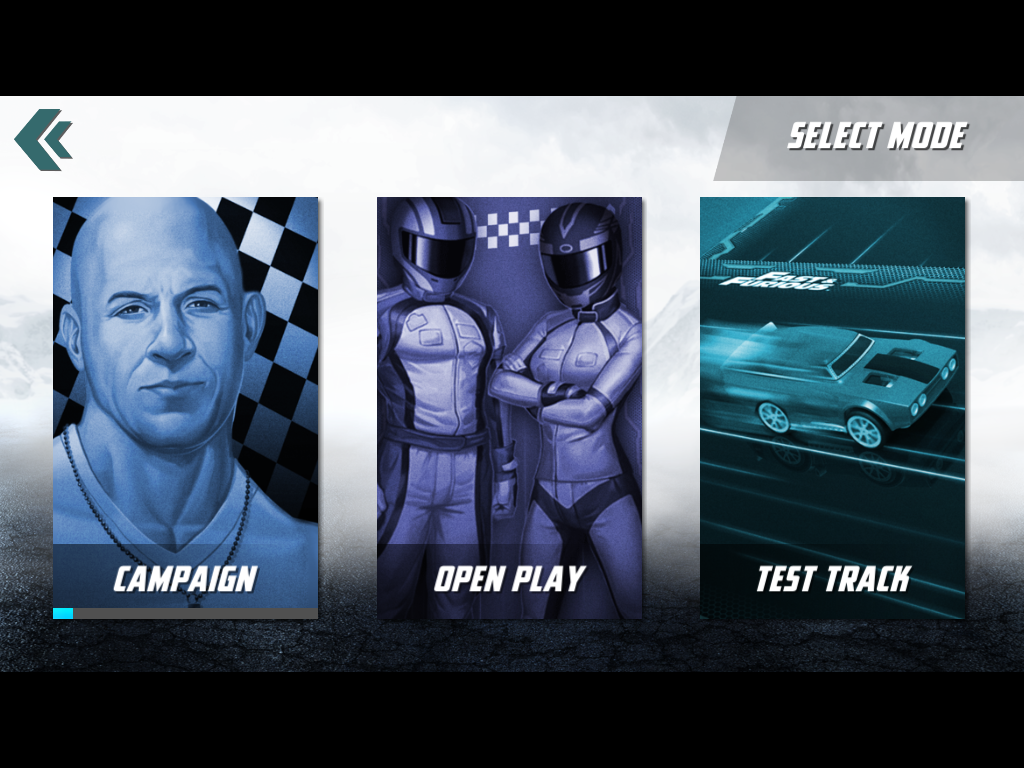 It’s all really slick and works well. This is an established system now; I’ve tried it on all three mobile platforms, and have rarely had an issue.

Anki Overdrive: Fast & Furious Edition – How fun is it to play?

Hearing that the cars are rechargeable might have set alarm bells ringing, since charging time is time in which kids will be waiting around and getting bored. But hold your horses: the Anki cars charge fully in around eight minutes. Give them a quick minute of refuelling in-between every few races and you’re unlikely to even notice the lost time.

So with the cars juiced up and placed on the track, the app downloaded and logged in – you’ll need to set up an Anki account for each player – it’s time to rev up.

The first time you set up a new track, the cars have to do a few laps to scan the course in order to figure out where they’re going. They only do it once, though – if you decide to change track layout, just get them to scan again. Once they’re done, they line themselves up at the start-finish line. 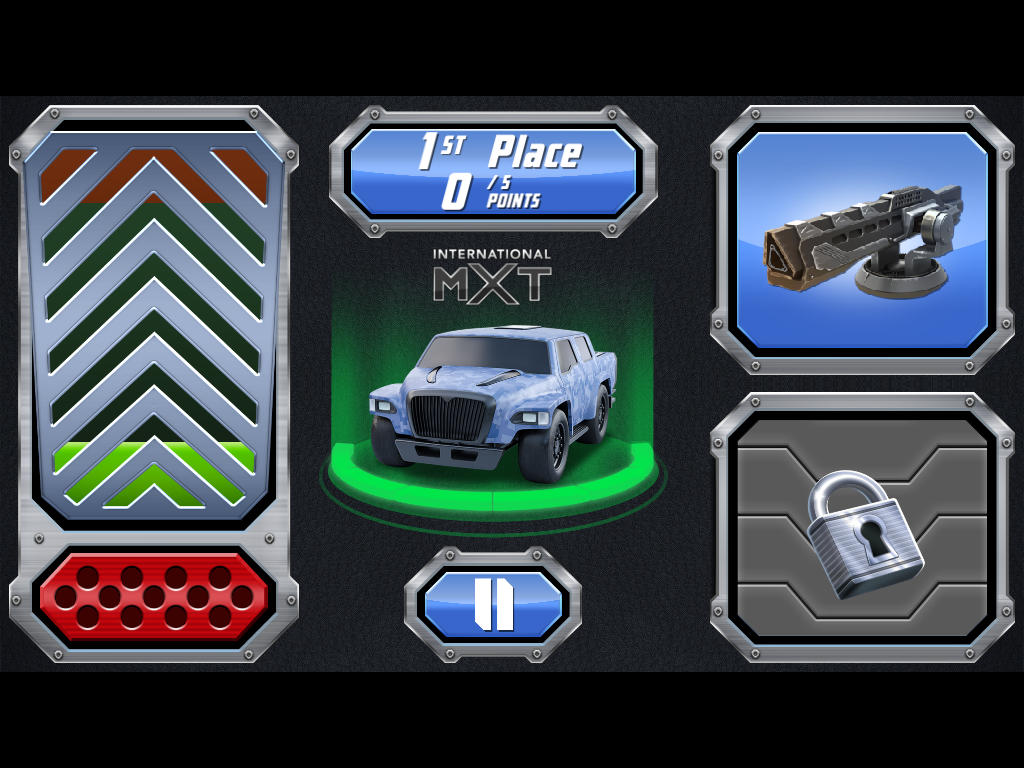 Then it’s onto the action. You’ll begin with a simple race against an AI opponent. On the app is a slider for throttle, and a button for brake, while tilting your mobile device left or right changes lanes. This is just slot-racing 2.0 – fun, but really only scratching the surface of what you can do with Anki Overdrive.

After a few races, you’ll enter your first Battle. Laps don’t count any more; this is about using virtual weaponry to damage your opponent’s vehicle until you’ve disabled it a set number of times. It turns into a game of cat-and-mouse, with tactical braking to get in behind for a clear shot, or putting your pedal to the metal to get some clear air to recover health or hit the Power Zone before your opponent. 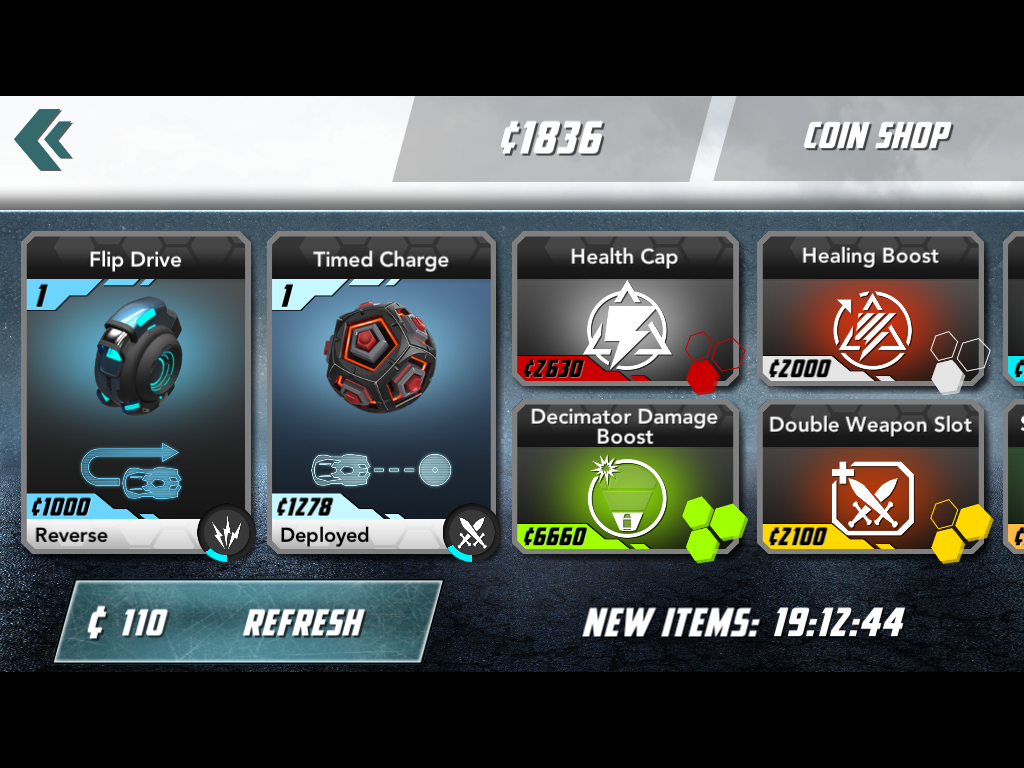 All of this is made all the more fun and addictive by Anki Overdrive’s rewards and upgrades. As well as guns, you can buy tractor beams for reeling cars in for an overtake, or armour plating that reduces damage taken, and speed boosters too. Cleverly, not everything can be equipped on every vehicle, and each car has its own strengths and weaknesses in terms of speed, stamina and the effects of its arsenal. So the incentive to buy Anki’s extra cars (£49.99/$49.99 each) runs to more than just wanting a traffic jam on the track – you can have up to four running at a time. This is about tactics and how you want to play the game. 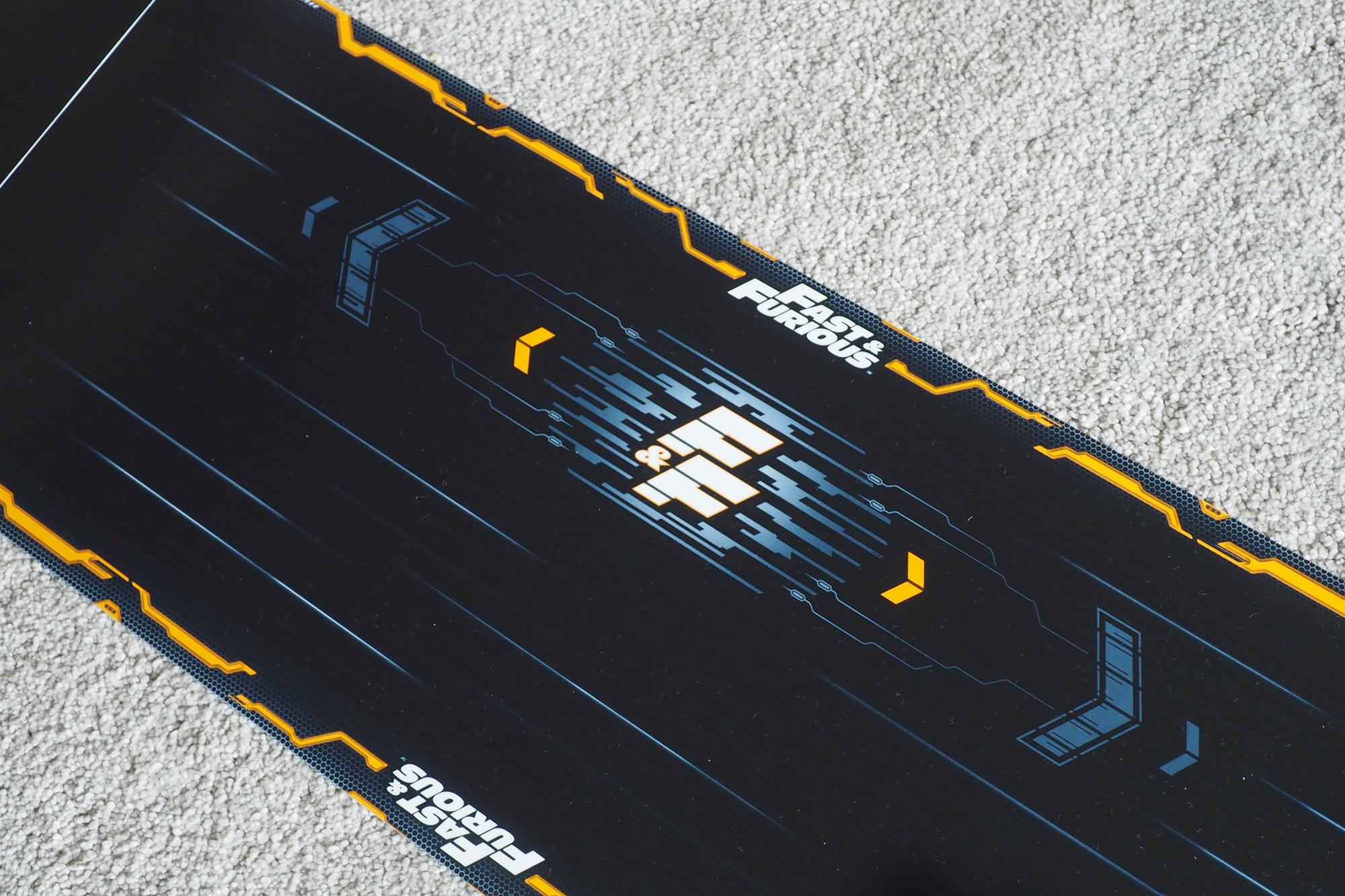 The F&F logo denotes the Power Zone, where you can ‘hack’ other cars

Talking of tactics, the new Power Zone straight is an interesting addition. By driving over it just ahead of an opponent, it ‘hacks’ the rival car, sending it haywire across the track so you can tear away into the distance. It’s a useful extra, and currently only available in the Fast & Furious Edition.

Following only a few wins in the Campaign mode, you’ll have unlocked various other modes that you can play as one-offs in either single player or multiplayer. One particular mode, Takeover, requires a Supertruck – there are two of these juggernaut lorries available, at £59.99/$59.99 each. You have to be the one to hit the Supertruck enough times, then you actually take control of it and use it to disable the other cars until you’ve racked up enough points. Driving a Supertruck also requires a little more actual driving care, as they have a tendency to tip over if you go full pelt around a tight bend. 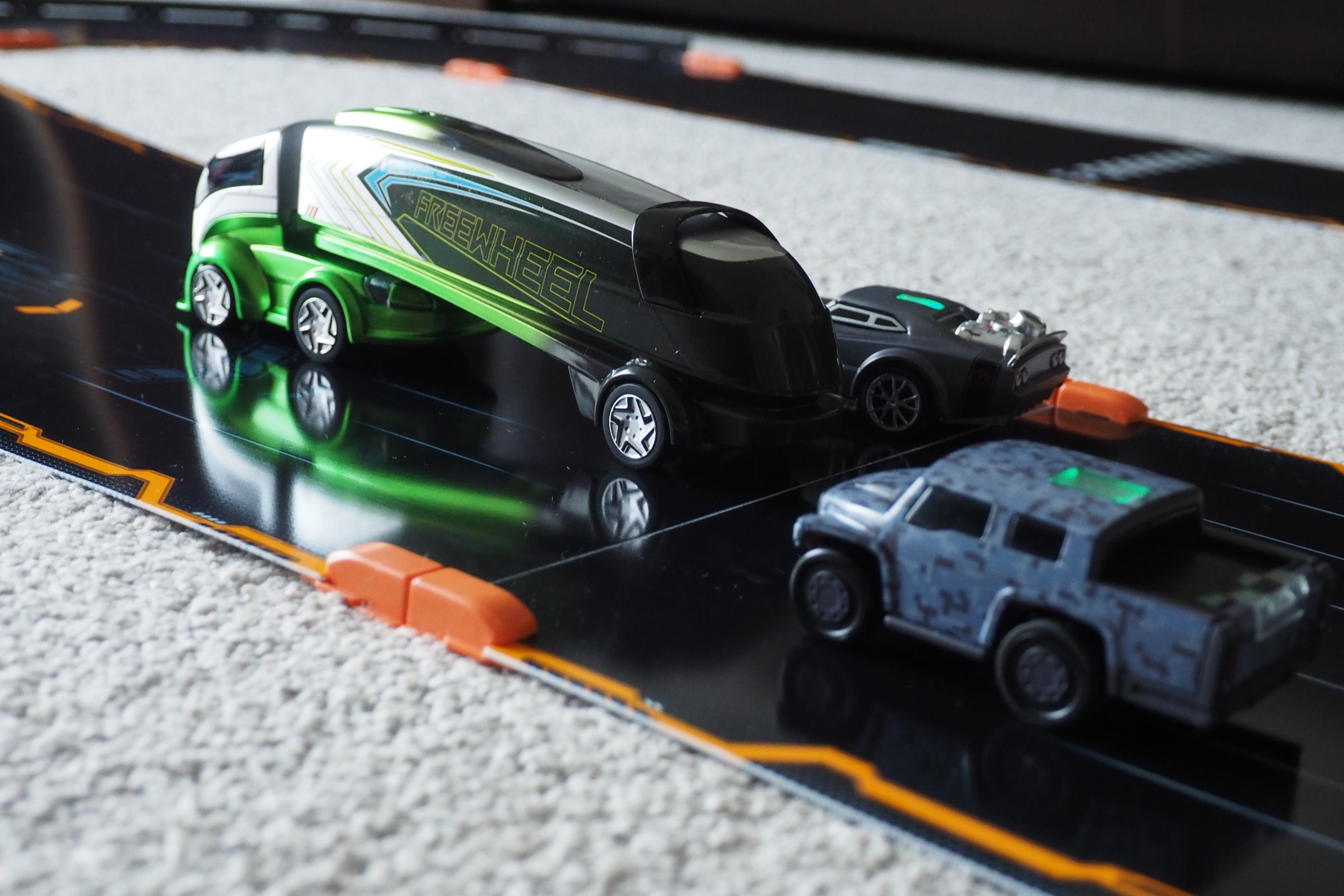 There’s also the excellent King of the Hill mode, which is a kind of digital tag where you have to evade your opponent for a cumulative number of seconds.

It’s a testament to Anki’s excellent AI that playing Overdrive in single-player mode with up to three robotic rivals is almost as much fun as getting your mates round for some multiplayer death-matches. Although the two-versus-two team battle is probably the highlight for me.

Overdrive has the feel of old-school board games such as Car Wars and Dark Future, and the movies such as Mad Max and Death Race 2000 that inspired them. This has been tried in video-game form, too, with titles such as Badlands and Autoduel. However, I’d argue that Anki has created something far more compelling, combining the two game styles and bringing it all to life.

Perhaps the only downside is that each player requires a mobile device – but in some ways that’s a strength, as nearly everyone over the age of eight seems to have a phone or tablet these days, so we’ve all got ready-made controllers. And the support for Fire OS helps to broaden that reach a little.

Like the original Anki Overdrive, this is a whole heap of tyre-screeching fun, whether you’re playing on your own or with family and friends. And this edition is given extra character via the movie-themed app and recognisable cars. Whether it’s worth the price premium over the standard edition will obviously depend on whether the Fast & Furious movies matter to you, or how much you like the bundled vehicles and new Power Zone feature.

Add-on track sections seem a little expensive at first glance, but it’s worth remembering that you don’t need multiple sections abreast to use more than two cars, as you do with traditional slot-racing systems from the likes of Scalextric and Carrera.

The additional cars – at £49.99/$49.99 each – also appear pricey, but they’re packed with tech that helps them get around the track and be recognised individually within the app. It’s just a shame there are none that are more like realistic scale models rather than cartoon supercars.

With the additions that Anki has made to the Overdrive system over the years, this is now one of the finest physical games you can buy.

This supercharged slot-racer has been given a movie-inspired respray – and it’s more fun than ever.